Now is the moment to conduct multidisciplinary study with the combination of many facts in the issue, as well as a need to look beyond the subject in order to protect human life. Because SARS CoV -19 has become a pandemic, researchers must concentrate their efforts on bio produced oxide nanoparticles and their therapeutic implications in society [1]. Nonotechnology is concerned with biological processes; for example, the employment of microorganisms for biosynthesis of bio nanoparticles is one of the tools in which microbial cells have proven to be highly effective. Although nanoparticles are useful, there is a need to develop nonopaticles, which are necessary in the sense that they are clean, simple to prepare, cost effective, and have a wide range of uses.

It is necessary to produce nanoparticles that are environmentally benign and do not have any negative effects. Nanoparticles must also be developed because they are time efficient. The application of nanoparticles in various fields is based on physic chemical features such as surface shape, surface area, size, zeta potential, and current charges on it [2]. Various nanoparticles with metal oxides, such as gold, copper, silver, zinc, magnesium, and others, are now being examined and evaluated for their vast and diverse applications. The high surface to volume ratio of nanoparticles with their metal oxide is one of their most important qualities; as a result of these characteristics, nanoparticles are noble [3]. Copper oxide metal nanoparticles have demonstrated antibacterial antioxidant, anticancer antifungal and larvicidal properties in a variety of fields. Microorganisms are used to biosynthesise nanoparticles, and they are more successful than other nanoparticles due to their stability, low toxicity, lack of hazardous residue, environmental friendliness, and lack of side effects. Most CuO- Nanoparticles are chemically synthesised using several ways such as alkoxide supported approach sol gel method electrochemical method microwave irradiation method and thermal decomposition method.

Triticum vulgare is an economically important plant species that is extensively dispersed around the world, particularly in India. It is used to treat decubitus ulcers, sores, burns, scarring delays, dystrophic illnesses, and tissue regeneration problems, among other things. Triticum vulgare's leaves, roots, stems, and seeds are valued for their medicinal and nutritional properties.Triticum vulgare seeds provide nutritional benefits. Endophytic actinomycetes were isolated from Triticum vulgare, which was taken in the middle of winter from an agriculture area in the Sangli district of Maharashtra (India).

The study focuses on isolating endophytic actinomycetes from Triticum vulgare and using their extract for the production of CuO nanoparticles. Metabolites such as protein and enzyme present in extract generated by endophytic actinomycetes act as a capping and stabilizing agent during the manufacture of CuO nanoparticles. The CuO nanoparticles that were biosynthesized were studied [6]. Biosynthesized CuO nanoparticles were characterized using XRD, UV-Vis spectroscopy, TEM, and SEM. The common plant pathogenic fungus is decreases the yield of crop plants. The plant pathogenic fungus are Didymella bryoniae causes Gummy stem blight disease affecting in watermelons, Septoria apiicola causes Late blight disease in Celery, also causes Bean Rust. Blast disease of rice disease caused by Pyricularia oryzae. The microbial blended CuO NPs of endophytic actinomycetes isolated from Triticum vulgare was used in this study for antimicrobial activity against these pathogenic plant fungi.

Fresh, newly growing stems of Triticum vulgare, a common wheat plant planted in a region of black soil near the edge of the Krishna river in Maharashtra, India, are available. Maxima's Hot Start PCR Master Mix (Thermo K1051, Sigma) was used to amplify 16 rRNA genes. Purification was done with the Gene Jet Kit (Thermo K0702), and the phylogenetic analysis was done with MEGA 6.0 software. CuSO4.5H2O (HiMedia) was used as a biosynthetic precursor for CuO nanoparticles. Perkin Elmer Lambda 35 UV-VIS spectrophotometry was used, and a Varian 670 FTIR spectrometer was used for Fourier Transform Infrared (FTIR) spectroscopy. For XRD, a Philips Analytic X-ray B.V. PW-3710 based model diffraction analysis utilising Cu-K radiation with a wavelength of 1.5418 was utilised, and for TEM, a JEOL JEM series JED-2300T transmission electron microscope was employed.

Triticum vulgare was a widespread plant grown by farmers in India, especially in the Maharashtra region. The isolation of endophytic actinomycetes from such a Triticum vulgare was carried out. In the mid-winter season, Triticum vulgare was gathered from an agriculture field in the Sangli District in Maharashtra (India). For this investigation, the mature stem was chosen. The stem was sliced into small pieces ranging from 1 to 2 cm in length, collected in a sterile conical flask, and delivered to the Departmental Microbiology laboratory. The conical flask containing Triticum vulgare stems was then kept at 4°C to keep it cool. The identification of the plants was accomplished using botanical nomenclature and classification. Species identification was done using the categorization process up to the genus and species level.

After that, the stem of Triticum vulgare was washed with sanitized and cooled tap water, which helped to remove the surface pollution on the stem. Surface sterilization was conducted out using a 1.5% to 3% hydrogen peroxide solution, which was effective in killing the remaining contaminants on the stem's surface. The stems were then immersed in a 70 percent ethanol solution for 15 seconds. It enables for surface sterilization of stems by washing them in sterilized distilled water for 5 minutes, then confirming surface sterilization by plating the washed distilled water on nutrient agar media [7-12]. The absence of any growth of bacteria, fungus, or actinomycetes after four days at room temperature demonstrated that the plate had been properly sterilized. The stems were crushed with a sterile needle and plated on glycerol aspargine agar media with griseofulvin 10 g/ml and incubated at room temperature for one to two weeks. One of the signs of an actinomycetal colony is the colony's powdery appearance when embedded in media on a plate. This colony will be used for additional examination and will be retransferred on a slant for preservation. This is referred to as endophytic actinomycetes, and the endophytic actinomycetes used for nanoparticle production serve as a green supply during the preparation process.

The isolated endophytic actinomycetes were separately merged in 0.08% saline NaCl, during the treatment of saline they were purely washed by the normal saline water. The marmur extraction method was specifically used for the isolation of genetic material from endophytic actinomycetes. Isolated genetic material was then used for the identification of isolated endophytic actinomycetes. 16S-rRNA genes were used for the further analysis to identify the particular species of actinomycetal isolates [13-17]. 16S-rRNA genes were amplified using Hot Start PCR Master Mix of Maxima (Thermo K1051, Sigma) in PCR technique. Then amplification of isolated genetic material (16S-rRNA genes) was carried out with PCR technology in the amount of 50 µL. The universal primer should be used for the amplification and identification of isolates. In PCR technique the reaction was carried out by using universal primers like 27f containing (5′-AGA GTT TGA TCC TGG CTC AG-3′) and 1492r containing (5′-TAC GGC TAC CTT GTT ACG ACT-3′). The PCR product was then purified. Using the Gene Jet Kit and then proper sequencing were carried out by DNA sequencers, in which forward and reverse primers were used for the sequencing. The specific sequence was observed by 16S-rRNA technology. Then were matched with the standard database by phylogenetic technique which was depends on database and watched isolated sequence to closely related sequence of gene bank. MEGA 6 software was used for this analysis.

After that, the washed biomass was suspended in sterilised distilled water and left at room temperature for another 48 hours, while actinomyctal metabolites percolated in the distilled water. Whatman No. 1 filter paper was used to separate the filtrate, which included actinomyctal metabolites, from the rest of the mixture. Because this filtrate acts as a reducing agent, it was collected and employed in the reduction process to produce CuO Nanoparticles biologically. In the procedure, 100 ml of separated actinomycetal filtrate was mixed with 25 mM Cu SO4 5H2O.This reaction mixture was kept at room temperature in the dark until a colour change occurred, at which point it turned dark.

It is a sort of therapeutic analysis of NPs-prepared materials. CuO-NPs were biologically produced and tested against human pathogens, some of which were gram-positive and some gram-negative [28-30]. The antimicrobial activity was evaluated against plant pathogen fungi such as Septoria apiicola (ATCC, 34705) Didymellabryoniae (ATCC, 200532) and Pyriculariaoryzae (ATCC 66063) and the zone of inhibition assessment was used to evaluate antibacterial activity. During the antimicrobial activity, CuSO4.5H2O was tested as a control. The CuO-NPs’ antibacterial properties were studied using the well diffusion method, which involved pouring pure cultures of fungal spore into molted sterilized potato dextrose agar media. All plates were given time to solidify. Wells of 0.7 mm diameter were made in aseptic conditions with a cork borer in seeded potato dextrose agar plate for eukaryotic cells. The antimicrobial activity was measured using a concentration of 25 mM of biologically produced CuO-NPs. In each well, 100 μl of a 25 mM solution of biologically produced CuO-NPs was added. For diffusion purposes, all plates were incubated at a low temperature for 15 to 25 minutes [31]. Plates were kept at 37˚C ± 2˚C for 24 h to 96 h in an incubator, and the diameter of the zone of inhibition for each culture of fungus around the well was measured. The measurements were taken in mm. The experiments were carried out in triplicate.

The two strains of endophytic actinomycetes were isolated and identified from stem of Triticum vulgare of located in the region mentioned in study area were name as A-1 and A-2 (Figure 1).

Figure 1:The stem of Triticum vulgare.

Figure 2:Phylogenetic analysis of 16S rRNA sequences of isolated endophytic actinomycetes and matched sequence with the sequences from gene bank. Figure 3:Absorbance peak of A-1, A-2 in UV- vis spectroscopy. Reveals that the antimicrobial potential of biologically produced CuO-NPs of A-2 was higher than that of A-1 against Pyriculariaoryzae (ATCC 66063) at 15 mM, with the diameters of the inhibition zones for CuO NPs of A-1 and A-2 being 6.7 mm and 9.4 mm, respectively. Biologically produced CuO-NPs (A-1 and A-2) were of pathogens and could be used as a step forward in therapeutic applications. Copper, as a metal, may have an oligo-dynamic effect on bacteria. Copper's antibacterial properties have been recognized and certified by the US Environmental Protection Agency (EPA) [37]. Furthermore, this study anticipated that endophyticactinomycetes' biologically produced CuO-NPs (A-1 and A-2) are more effective than Cu ions. CuO-NPs suppress microbial cells through a method in which the nanoparticles' tiny Size and high volume surface area enable them to interact with the cell membrane and resulting in inhibition.

According to some research, CuO-NPs produce hydroxyl molecules/radicals that bind to DNA and destroy the helical structure of DNA; moreover, these radicals attach to the sulfhydryl amino group and the carboxyl group of amino acids found in essential proteins and enzymes, resulting in inactivated essential enzymes [38-42]. These CuO-NPs are also implicated in the microbial cell penetration system. CuO-NPs inactivate the surface protein on the cell responsible for critical transport across the cell membrane, effectively stopping microbial cell permeability. Alternariaspp., Aspergillusniger, and Pythiumspp. are all inhibited by green-produced Cu-NPs. Green synthesized Cu-NPs inhibit Alternaria spp. by 57.1%, Aspergillusniger by 63.8%, and Pythium spp. by 58.1% tested for antibacterial efficacy against chosen pathogens. It was shown that biologically generated CuO-NPs (A-1 and A-2) by endophyticactinomycetes are effective against a variety (Figure 8 and 9). 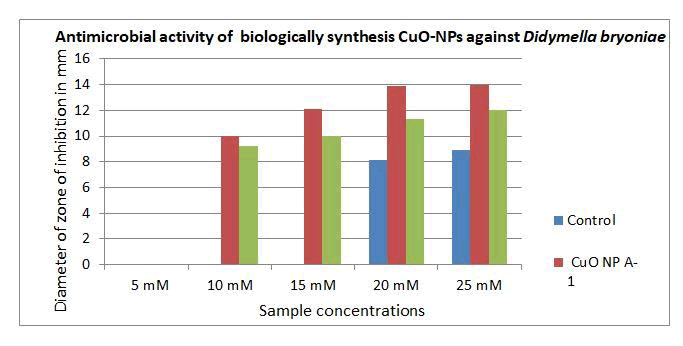 The work presented first was the endophytic actinomycetal driven synthesis of CuO nanoparticles utilising Streptomyces noursei and Streptomyces fradiae. Streptomyces noursei (A-1) and Streptomyces fradiae (A-2) biosynthesized CuO nanoparticles were validated by changing the hue from faint blue to dark greenish brown and obtaining an absorption band at 415 nm and 430 nm for A-1 and A-2, respectively. XRD confirmed the crystal structure. Particle size was between 75 and 80 nm in diameter, and they were homogenous and spherical,

According to TEM investigations, both Biosynthesized CuO (A-1) and (A-2), which were evaluated by FT-IR, had a number of function groups. Endophyticactinomycetes generated biogenic CuO-NPs (A-1 and A-2) are effective against a variety of fungal pathogens. All fungus are more sensitive to both types of CuO-NPs (A-1) and (A-2).The present study hence offers a novel and safe CuO-NPs multifunction as a possible means for diverse therapeutic applications.