Antifungal Susceptibility in Blood Stream Infections with Candida: An Experience from a Tertiary Care Hospital in Kerala, India

The incidence of Candidemia related hospitalizations per 100,000 population escalated by 52% during the last two decades. The causes for increased Candida infections can be attributed to the use of broad-spectrum antibiotics and immune suppressants like steroids, prolonged hospitalization, intensive care unit (ICU) stay, increased invasive procedures in medical practices, more complicated underlying diseases such as malignancies, as well as prolonged survival of patients in the modern health care system. The morbidity and mortality associated with Candidemia are high across the world. Studies regarding the treatment aspects of Candidemia are limited from resource limited settings. Our study is intended to explore the existing treatment of Candidemia which can help in decreasing the morbidity and mortality burden.

Candidemia is the presence of Candida species in the blood which is the most common manifestation of invasive Candidiasis [1]. Between 2000 and 2005 the incidence of Candidemia-related hospitalizations per 100,000 population rose by 52% [2]. The burden of this illness is considerable in terms of morbidity, mortality, and expense [3]. The reasons for increased Candida infections may be due to the use of broad-spectrum antibiotics and immunesuppressants like steroids, prolonged hospitalization and intensive care unit (ICU) stay, increased invasive procedures in medical practices, and more complicated underlying diseases such as malignancies, as well as prolonged survival of patients in the modern health care system [4,5]. In the last few years, treatment failures for Candida infections associated with resistance to amphotericin B (AMB) and reduced susceptibility to azoles and echinocandins have been reported [6]. A delay in treatment can increase the mortality rate of over 60 percent [7,8]. With the early diagnosis of Candidemia, the overall mortality rate of Candidemia can be reduced approximately 30 to 40% [9]. Antifungal agents used for the treatment of Candidemia includes fluconazole 400 - 800 mg/day; the three Echinocandins: Caspofungin 50 mg/day, Anidulafungin 100 mg/day, and Micafungin 100 mg/day; Voriconazole 3 mg/kg twice daily; Amphotericin B 0.7 mg/kg/ day; and a lipid formulation of Amphotericin B 3 to 5 mg/kg/day 61 [10]. The use of fluconazole as empirical therapy failed to show benefit [11]. Data regarding the incidence rate of Candidemia in a hospital setting and the antifungals used are limited from low and middle income countries. Our study aims in estimating the incidence rate as well as the different aspects of antifungals used for Candidemia.

To estimate the incidence of Candidemia in patients admitted for various conditions in a tertiary care centre.

• To determine the antifungal susceptibility in patients with Candidemia.

• To study the most employed antifungal agent in patients infected with Candidemia in a tertiary care hospital.

• To evaluate the mortality rate of patients with Candidemia who were treated with different antifungals (Figure 1). 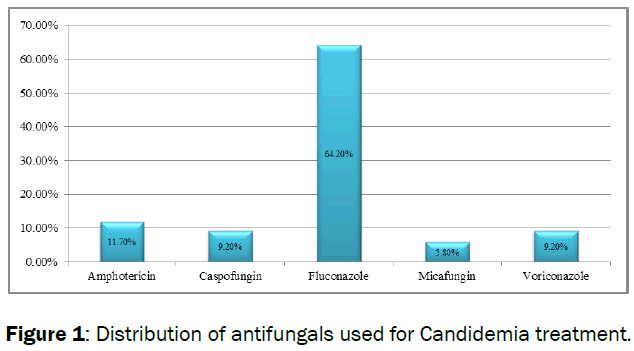 A prospective observational study which included all adult patients admitted to a tertiary care centre. The study participants were adult inpatients (>18 years of age) of the various departments of the hospital who had positive isolates of blood stream infection with Candida species during the period August 1st 2014 to January 31st 2016. The study duration was one year. Informed consent was obtained from each participant. A total of 1600 positive blood culture samples for various microorganisms were tested for positive Candida species isolate. Patients who were referred from outside the study institution with positive Candida infection were reconfirmed with repeat blood sample test in the study centre.

Adult in-patients (age >18 years) admitted in the study centre during the period of August 1st 2014 to January 31st 2016 with positive Candida bloodstream infection.

Patients referred from hospitals outside the study Centre with positive Candida bloodstream infection were reconfirmed with Candidemia isolate on repeat blood sample test in the study centre were also included in the study.

Patients with yeast as the cause of blood stream infection were excluded from the study.

All patients with positive blood stream infection during the period August 1st 2014 to January 31st 2016 were consecutively enrolled for the study. A total of 1600 positive blood culture samples were analyzed for Candida species isolation.

Table 2: Mortality rate due to Candidemia in patients who were treated with different antifungals.

Incidence of Candidemia was 7.5% among all blood stream infections in our study. In our study almost all patients were susceptible to itraconazole, voriconazole, caspofungin and micafungin (100%), even though a resistance pattern was observed with Amphoterecin (22.5%) and fluconazole (23.3%). Antifungal susceptibility pattern observed in a study conducted by Pfaller et al. showed fluconazole susceptibility with 123 isolates (69%) out of 178, 58.4% with itraconazole, 99% susceptibility with caspofungin and amphoterecin and 98% with Voriconazole [12,13]. The most employed antifungal agent was fluconazole (64.2%) and amphoterecin was second most used antifungal agent in our study (11.7%). Micafungin was the least employed drug (5.8%). A similar pattern was observed in a study conducted by David L Horn et al. with a total of 2019 patients in which fluconazole was the most widely used antifungal agent (77%), caspofungin and micafungin (74.5%) was the second most antifungal agents used and amphoterecin was the least used antifungal agent (27.4%) [14]. Out of 77 patients who were on treatment with fluconazole, 48 of them were succumbed to death (62.3%) in which 37.6% of them were sensitive and 71.4% showed resistance to fluconazole. Among the 120 people in our study 73(60.8%) succumbed to their illness which is higher compared to the EPIC II international series where they found a mortality of 42.6% [15]. Mortality rates vary across the globe that range between 35%–75%. Candidemiaattributable mortality also varies widely (5.0–49.0%) between centers [16]. Effective antifungal measures are to be taken to prevent spread of infection and prevent further morbidity and mortality.

Patients having bloodstream infections with Candida species should be treated with an antifungal agent at the earliest to prevent further morbidity and mortality. Even patients having vascular catheter tip infections with Candida species should be initiated on treatment at the earliest. The rationale for this recommendation is related to the high rate of metastatic foci in major organs associated with hematogenously disseminated Candidiasis. Repeated blood cultures should be obtained to ascertain that the fungemia has resolved, even after the first blood culture has yielded a negative response. Antifungals should be continued for 2 weeks from the date of first negative blood culture. Considering the increasing incidence of Candida species among blood stream isolates in hospital and the infection being a life threatening one there is an immediate need to take appropriate actions against the control of this infection or else there is a high chance of morbidity and mortality in affected patients. Screening of the high risk patients admitting to the hospital, decolonization, changing the venous access, infection prevention and control measures with prophylaxis, environmental control and appropriate antifungal regimen might help in improving the outcome of patients with Candidemia.