Several attempts yielded that soils of Cachar district are rich in entomopathogens viz., Entomopathogenic Nematodes (EPN), Entomopathogenic Bacteria (EPB) and Entomopathogenic Fungi (EPF), therefore adequate knowledge of pathogen ecology- its spatial distribution, population dynamics and its efficacy is essential for improvement of sustainable, eco-friendly pest management practice in the district. Among all the entomopathogens, EPF are the most potential natural mortality agents because it has wide host range, host specific, viability in soil and infectivity on slight contact with the host. The present study was conducted to isolate and identify local strain of EPF from soil using Greater wax moth, Galleria mellonela as baiting insect. Based on detailed morphological study through microscopic observation after lactophenol cotton blue staining, the species identified as Beauvaria bassiana. In Potato Dextrose Agar (PDA) culture medium EPF was cultured at various pH levels (3.5-6.8) for 13 days. The identified EPF, B. bassiana grew as white mould, it produces distinct spore balls made of many dry, powdery conidia. Each spore ball is made of group of numerous conidiogenous cells. The conidiogenous cells are short, ovoid and with elongated rachis. The optimum temperature, relative humidity and pH for abundant sporulation growth of EPF, B. bassiana in PDA culture medium were 25°C, 90 ± 5% and 6.8 respectively. Sporulation growth directly proportional to pH level, as with the increase in pH the biomass of B. bassiana increased considerably. Maximum dry biomass growth recorded 180 mg and radial expansion 4.57 mm diameter at pH 6.8. PDA media also noted to be ideal for mass production of B. bassiana.

The concept of biological pest control system originated in early 19th century, when the Italian pathologist named Agostino Bassi spent years in studying white muscardine disease in silkworms, Bombyx mori. Enotomopathogenic fungi are found in the division Eumycota [1]. Currently, the two most widely studied and used species of entomopathogenic fungi are Beauveria bassiana and Metarhizium anisopliae. The genus Beauveria was described B. bassiana has wide host range infect over 700 species belonging to order Lepidoptera, Coleoptera, Orthoptera, Hemiptera, Diptera and Hymenoptera. Ectotoxins produced by these pathogenic fungi are beauvericin, isarolides, bassianolide and isarolides [2]. Disease caused by B. bassiana known as white muscardine, its infection symptom are- mummification of cadavers, followed by white mycelial growth on the insect cuticle and formation of conidia.

The mode of action of EPF

The present study was conducted in Cachar, Southern Assam during February 2020 to May 2020. Experimental investigation was carried out in the Biotech Hub, department of Zoology, Cachar College, Silchar. Various soil samples were collected from different farm locations of Cachar district. Using metal shovel 15-20 cm pit dugout and 5 soil sample collected in sterile plastic bag from each site. Plastic bags were labelled with date and place of collection, and also soil related to which vegetation. In the laboratory soil were cleaned by removing debris like rocks, dead insects, wood bark pieces, leaves, etc to avoid further contamination with saprophytic microorganisms (Figure 1).

For isolating indigenous strain of EPF from soil sample Greater Wax Moth (GWM), G. mellonella larvae used as insect bait. GWM larvae were maintained in laboratory condition under artificial diet. For soil treatment to each soil sample of 250 g in a container 10-12 medium size last instar GWM larvae were added. Containers were covered with a lid and turned upside down [4-6]. Containers were maintained in the dark and at temperature 22-25°C. The soil was checked daily to observe dead bait larvae and also time at which larvae were died recorded.

The collected cadavers from soil were cleaned with sterile water using point 1 painting brush twice to remove soil and dirt cling to its body setae or integuments. For surface sterilization cadaver dipped in 1% Na-hypochlorite for five seconds to prevent external growth of saprophytic fungi. Cadaver was placed in petri dish lined with a single layer of whatman filter paper moisten with 3-5 drops drops of sterilized water for few days until mummified body i.e muscardine disease were observed.

For the adequate growth fungi optimal nutrient medium is necessary. In the present study, Potato Dextrose Agar (PDA) medium selected. PDA is prepared by boiling mixture of infused potatoes (200 g peeled potatoes scrubbed and boiled in 1000 ml water for at least 30 mins to 1 hour, then extract is filtered using fine trainer to obtain smooth paste) 1000 ml, glucose 20.0 g and agar 15.0 g followed by sterilization of medium in autoclave at 121°C for 15 mins. Then the mixture is aseptically transferred into sterile petri dishes [7-10]. As the medium is both light and temperature sensitive, so, plates were stored in dark at 2-8°C and are used within a week of preparation.

To study the effect of pH on biomass growth and radial expansion of colonies of EPF, five pH levels ranging from 3.5 to 6.8 (i.e 3.5, 4.5, 5.5, 6.5 and 6.8) were tested. For each pH three petri dishes prepared to take mean of three replicates. The pH of culture medium was adjusted by adding 1 N HCl and 1 N NaOH with the help of indicator paper prior to autoclaving. Fungal growth was assessed in the form of radial expansion.

The fungal spore was cultivated in total fifteen petri dishes (3 petri dishes for each pH to take mean of three replicates) measuring 5 cm × 1 cm containing Potato Dextrose Agar (PDA) medium and kept in BOD incubator at temperature 25°C, 90 ± 5% relative humidity and pH 3.5-6.8. After appearance of mycelial margin and sporulation, the fungus was taken for further identification.

On the onset of mortality the cadaver body was covered with black dot suggesting infestation by B. bassiana. After 5-7 days post mortality mummified bodies look wooly, floccose and appeared powdery due to abundant conidia formation indicating occurrence of muscardine disease by Beauveria spp. Isolates of B. bassiana were cultured in five different pH levels (3.5-6.8) for 13 days in PDA medium. After 14 days on PDA, colonies look velvet to powdery, rarely forming synnemata. At the begning colonies had whitish mycelial growth, which is the symptom of infection by B. bassiana, which became pale yellow to creamish spores with time. The underneath surface or reverse side of the colonies is observed to be colourless to yellowish. Conidia are globose (ovoid) to subglobose in shape in globose clusters with smooth walled of 2-3 microns in diameter. Conidiophore was smooth and colourless, conidial chains were long and conidial heads diffused. Also the spp. reproduces by production of dry spores on the conidiophore that grew sympodially, thus, confirming the local fungal isolate of this study to be Beauveria bassiana (Figures 2 and 3). The variation in the pH level of the culture medium has been observed and noted that pH played significant role on the biomass production. With the increase in pH the growth of these organisms increased considerably. The pH 6.5- 6.8 has been found to be favourable level for their vigorous growth [11]. At pH 3.5 no growth recorded whereas from pH 6.5-6.8 subsequent growth visible and at pH 6.8 maximum biomass production of 180 mg in B. bassiana observed. The change in radial expansion (growth) within different pH level upto 13th day has been observed. Result showed that maximum expansion visible in 6.8 pH petri dishes from day 1 onwards. Maximum diameter of the colony noted to be 4.57 mm on 13th day at pH 6.8 (Figures 4 and 5). 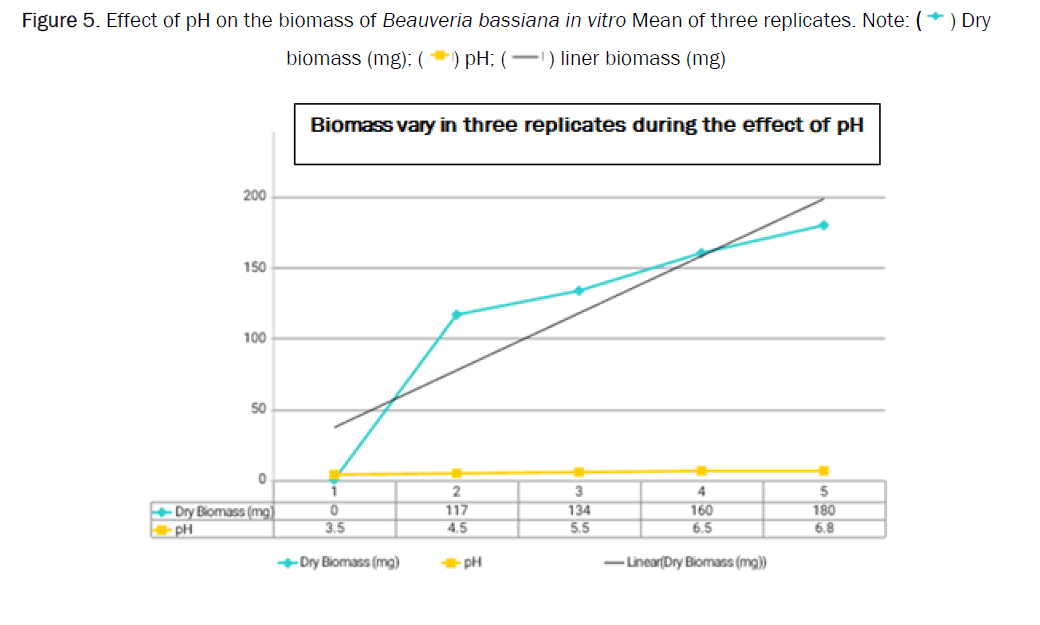 Figure 5: Effect of pH on the biomass of Beauveria bassiana in vitro Mean of three replicates. Note: (

As soil of Southern Assam are rich in entomopathogenic agents like EPF, EPB and EPN so, intensive exploratory investigation, identification and implementation of entomopathogenic agents is essential for extensive organic farming practices in Assam. From the above survey isolated fungal growth from insect cadaver identified as Beauveria bassiana based on morphological identification under microscopic observations. The fungus was isolated from clay type soil and resulted mortality in GWM within 24 hours of soil treatment suggesting highly pathogenic to insect pest. The appearances of black dot on cadaver dermis onset of mortality clearly indicate infestation by B. bassiana. The fungus grew well on PDA medium with abundant sporulation at optimum temperature of 25°C, RH 90 ± 5% and 6.8 pH. The result also showed that pH level of the PDA medium had produced significant effect on the biomass production and radial expansion of B. bassiana, as colony growth directly proportional to the pH level. At 6.8 pH dry biomass growth noted 180 mg and radial growth in diameter 4.57 mm (13th day) in vitro condition.

The PDA culture was powdery type and mycelium appeared white at beginning and turned pale to yellowish with time. Detailed morphological studies through microscopic observations showed that spore and conidia were glucose (ovoid) to sub-glucose in shape. Conidiophore was smooth and colorless with long conidial chain and diffused heads. B. bassiana reproduces by production of dry spores on the conidiophore that grows sympodially. Also, PDA media noted to be ideal culture medium for conidia production.

Future scope of this research can be concluded that this experiment has already highlighted some aspects of efficacy of EPF, B. bassiana in effective pest management strategy. Extensive exploration with molecular characterization of indigenous isolates required for better adaptability of predator-prey association in different agroclimatic zones of Assam. Host specific virulent strains should be identified and maintained by mass production in appropriate nutrient supplement. Also, formulation storage technique for prolonged shelf life should be developed.