Solanum melongena L. is a member from the family Solanaceae along with S. tuberosum (potato), S. lycopersicum (tomato), Capsicum sp. (pepper) etc. Solanum melongena L. is commonly known as eggplant or brinjal and is a popular vegetable plant with various known nutritional and ethomedicinal values. Even though S. melongena is native to India and China but are know well spread all across the globe. The Indian state of Assam, located in the North-eastern part of India is one of the biodiversity hotspots in the world and is a treasure trove of various plant varieties. The Darrang district of Assam is known for its large scale production of vegetables and hence considering the above facts, a survey was conducted to assess the available biodiversity in terms of varieties of S. melongena L. in the region and further the market potential of the same was also surveyed. The study shows the availability of 16 varieties of S. melongena L viz., Pusa purple oval, Sagalihingia, Pusa Bhairav, Arka Nidhi or BWR-12, Snowy, Kuchia, Borbengena, White oval, Green oval, Long green, Pusa purple long, Pusakranti, Khorua-3, Arka Neelkanth, Simran and Pusa purple cluster in the region. Out of these, pusa purple long variety is more fruit yielding followed by Arkanidhi, Borbengna and Arkaneelkanth variety. A wide range of differences in terms of the price of Brinjal was observed. The per kg price of White oval and Borbengena variety was found highest due to more preferences by the customers. Whereas, the price of Pusa purple oval and Arka neelkanth varieties was found low. The varieties such as Pusa purple round and Pusa purple were cultivated rarely which needs proper attention for the conservation of such varieties for future.

Solanum melongena L (division Anthophyta, class Dicotyledoneae, order Solanales) is commonly known as eggplant and are agronomically important plant species in the form of popular vegetable almost all across the globe. These are non-tuberous, belongs to solanaceous crop which are primarily grown for its flashy oval fruit. Solanum melongena L is a native species of Indian and China and it is assumed that these were possibly introduced to Europe by Arabic traders and later Europeans introduced these to North America [1]. Even though the fruit of this species is used as popular vegetable but existing ethnomedicianal knowledge shows their potential medicinal use for the treatment of diabetes, arthritis, asthma, bronchitis, in reducing blood and liver cholesterol levels etc [2-5]. The major component of anthocyanin pigment in Solanum melongena L is nasunin, which is well known as an antioxidant and also known to inhibit lipid peroxidation [6,7]. Additionally, pheophytin, a colored component found in the fruits of Solanum melongena L is reported by researchers for its activity against several chemical mutagens leading to cancer [8,9].

The Northeastern state of Assam is known for its rich biodiversity and is home of various agro-economically important plant varieties. Various types of Solanum melongena L are widely cultivated all across the state for their food and market value. However, extensive literature survey shows no documents sufficiently discussing the systematic survey on the availability of various varieties under Solanum melongena L. Henceforth the current study aimed to carry out a survey on the available Solanum melongena L varieties existed in the Darrang district of Assam considering the fact that it produces a considerable amount (9004 tones) of Solanum melongena L fruits during the year 2012-13 [10]. The district covers an area of 18,50,058 km2 with a total population of 9, 08,090 as per the census carried out in the year 2011 indicating a huge number of potential consumers (http://darrang.gov.in). The current study carried out to assess the diversity of Solanum melongena L found in different areas of Darrang district of Assam and also to classify them based on their morphological characters with productivity and market potential.

The present study was carried out in the Darrang district (latitudes: 26°9' N to 26°95' N and longitude: 91°45' E to 92°22' E) of Assam during the Rabi season of the year 2019-20. This district is topographically a plain except the regions connected with Bhutan and Arunachal Pradesh on north with a few upraised sectors (Figure 1) (Table 1). 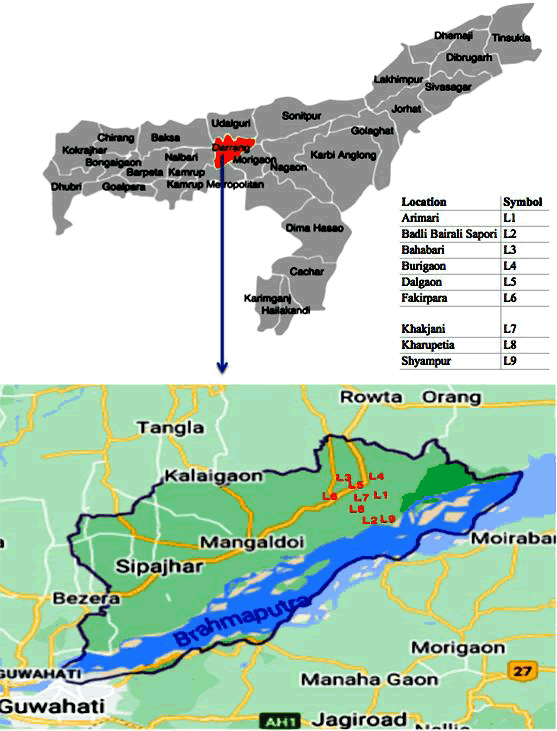 The plant specimen with stem, flower, leaf and fruit were collected from the pre-designated areas and high resolution pictures were taken for each part of the plant as well as the whole plant. The following tools were used viz., knife, blade, pencil, notebook, polythene bags, tags, newspaper, photographic tool, measuring rope, weight machine, walking stick, scissor, a pair of forceps, hand or pocket lens etc. for the specimen collection (Figure 2). At least 2-3 specimens were collected for each species to avoid damage during transportation and preservation. The collected specimens were wrapped in newspaper and transported in a polythene bag to prevent wilting. The collected specimens were tagged with a field number. Data related to the dimension of the fruit, weight, colour, place of collection, etc. were tabulated (Table 1). 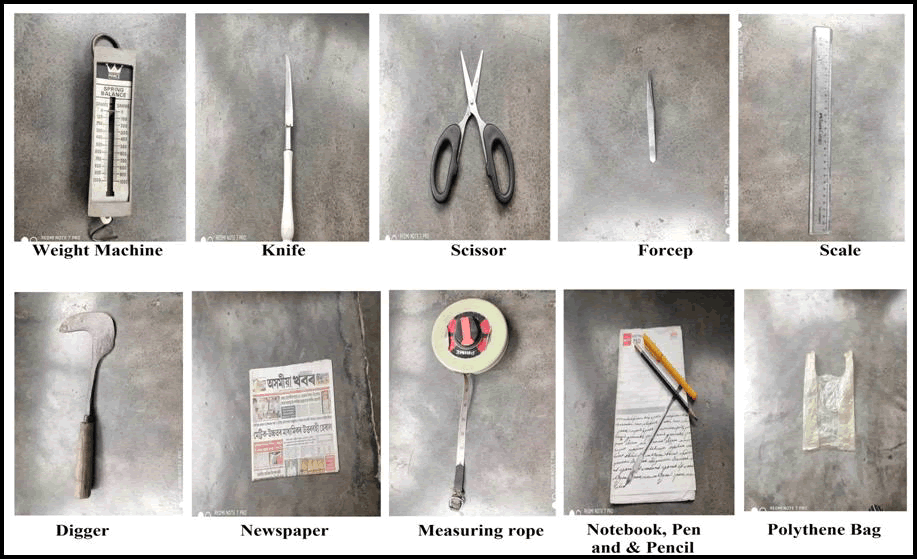 Pressing of the specimen

After collection plant material should be laid carefully between sheets of newspaper and tightly pressed with plant press. Newspaper should be changed on everyday basis for first 2 to 4 days and several times more at longer intervals for proper drying of plants. Then the dried specimens expose to sun or air and stored in newspaper until mounting. Large specimens were pressed in “V” or “N” manner.

Dry specimen should be treated in a saturated solution of mercuric chloride in ethyl alcohol before mounting to prevent fungal infection, insect infestation etc.

After fixing specimens on herbarium sheet the following information viz., serial number, botanical name, family, genus, species, local name, date and place of collection was entered at right side of the lower corner of herbarium sheet.

The plant specimens were identified in consultation with taxonomists of Department of Botany, Assam down town University, Guwahati.

The market potential was analyzed by conducting a survey on the per kg rate of the fruits among the local market places (n=50) throughout Darrang district. Moreover, the annual productivity (q/ha) was also surveyed among the local cultivars (n=50) and the results are expressed in mean ± SD.

Brinjal is a popular vegetable in India after potato. Due to different levels of productivity, soil type, availability of adequate facility, fruit infestation, physiographic differences, diverse food habits and techniques of preparation various types of brinjal varieties are found in Assam. Darrang district of Assam has two regulated markets Kharupetia and Besimari which are the most vegetable growing and trading places in the state [11]. The diversity of indigenous varieties of Solanum sp. in Darrang district of Assam was carried out along with its market potential and productivity analysis. The fruits of Solanum sp. are used as vegetable and recommended for liver complaints and enlarged spleen as per ethnomedicinal practices [12]. The leaves of this species are known to have phytochemical properties and are used in the treatment of bronchitis, cholera, dysuria, asthma etc [13]. The leaves and fruits are also known to have the potential for reducing blood cholesterol level. Root of this species is credited in indigenous medicine as anti-asthmatic and general stimulant and dried seeds are used against dyspepsia and constipation [14-16].

The current survey reports the availability of 16 verities of Solanum sp. L in various regions of Darrang district. The available indigenous varieties are Pusa purple oval, Sagalihingia, Pusa Bhairav, Arka Nidhi or BWR-12, Snowy, Kuchia, Bor bengena, White oval, Green oval, Long green, Pusa purple long, Pusa kranti, Khorua-3, Arka Neelkanth, Simran and Pusa purple cluster. The basic characteristics of the fruit in terms of fruit colour, shape and the collection area are shown in Table 1. The photographs of all the plants with their habitat, leaf, flower and fruit part is shown in Figure 3. Flower and leaf descriptions of all the collected varieties are shown in Table 2 which is considered as one of the major parameters for the identification of plant varieties.

Table 2: Leaf and flower description of all the collected varieties 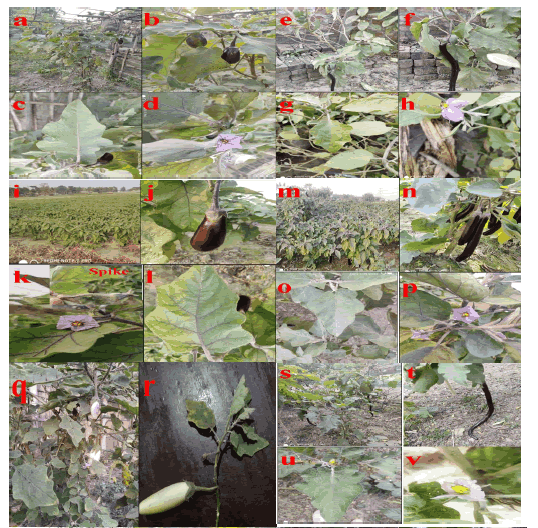 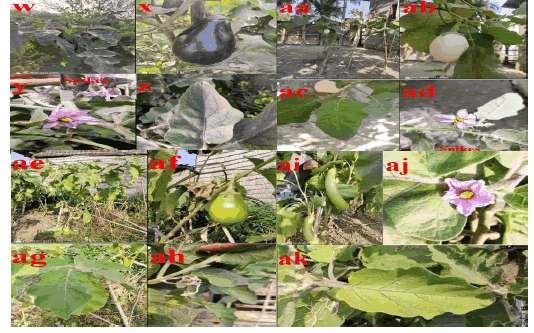 The result of this investigation revealed a wide range of variation among brinjal varieties in shape and colour and also clear difference in yield, market price attributes (Table 1) (Figure 4). The diversity may be because of various productivity, physiographic differences, diverse food habit, soil type etc. Among all the 16 varieties found in this present investigation most of them are long (n=10) in shape and purple (n=5) in colour (Table 1). Highest yield is found in Pusa purple long (280 q/h) followed by Arka nidhi (270 q/h), Bor bengena (270 q/h) and Arka neelkanth (270 q/h) varieties because of high customer preference, minimum fruit infestation or may be due to availability of adequate facility for the growth of the plants which have long fruit which are purple to dark purple in colour (Figure 4). From Figure 3 it is seen in that Pusa purple long variety is more fruit yielding followed by Arka nidhi, Bor bengna and Arka neelkanth variety. Maximum diversity was recorder in fruit shape of brinjal in Darrang district of Assam. The greater increase in production of Pusa purple long variety as compared to other variety was resulted into a positive impact on the yield of brinjal variety. But the yield of White oval (80 q/h), Snowy (100 q/h) and Sagalihingia (100 q/h) are low may be because of diverse food habits, less customer preferences. Moreover, the soil character, physiographic differences are also responsible for low productivity.

Figure 4: Graph showing productivity (q/ha) of various brinjal varieties in Darrang district as per the survey conducted during the year 2019-20.

A wide range of differences in the price of Brinjal was observed during the local market survey (Figure 5). The per kg price of White oval and Bor bengena variety was found highest which may be may be due to high customer preferences. But the price of Pusa purple oval and Arka neelkanth varieties was found low which may be due to less customer preferences, high productivity and lesser food habit. Except these varieties, some other varieties of Brinjal viz., Pusa purple round and Pusa purple varieties were cultivated in past but nowadays cultivation of these varieties are rare due to less yield. The Present study highlighted that yielding varieties are mostly long (10) in shape and purple (5) in colour. Present study also revealed that customer preferences and productivity are two main reasons for the yield and Market price of various Brinjal varieties in Darrang district of Assam.

Figure 5: Graph showing local market price (INR/kg) of various brinjal varieties in Darrang district as per the survey conducted during the year 2019-20.

Based on the study conducted, it can be concluded that customer preference and productivity are the two main reasons for the yield and market price of brinjal varieties. Indigenous varieties such as Pusa purple long followed by Arka nidhi showed significantly high yield as compared to the rest of the varieties. Survey on local market price shows highest per kgcostfor White oval variety followed by Bor bengena as compared to rest of the varieties. The present study also concluded that most of the varieties in Darrang district is purple to dark purple in colour and long in shape. Other varieties such as Pusa purple round and Pusa purple cluster are rarely cultivation and are very less in this district. Preventive measure must be taken to increase the rate of production of these varieties for the survival. These rare varieties can also be grown in home garden and measures should be taken to conserve such varieties. Periodic monitoring of these varieties can protect them for long term existence.