To evaluate analgesic activity of herbal formulation „triphalaâ and compare it with paracetamol by using Eddyâs hot plate and writhing test in mice. Albino mice were divided into three groups of 6 each for both tests. Triphala(1 gm/kg/body wieght) and Paracetamol(1.45 mg/20 gm of mice) made as suspensions prepared in 2% carboxy methyl cellulose (control) and were fed to mice orally. In Eddyâs hot plate method, pain tolerance was recorded at baseline and then at every 30 minutes for 4 hours after drug administration. In writhing test, after 30 minutes of drug administration, the animals were treated with 0.6% acetic acid intraperitoneally and number of writhings was counted for 5 min and results were compared. In Eddyâs hot plate method, triphala showed analgesic activity 30 minutes after drug administration with mean pain tolerance time of 10.88±1.57 seconds(P<0.05), while paracetamol showed analgesic activity at 120 minutes with pain tolerance time 11.18±2.55(P<0.05) compared to baseline. Effects were lasting for 210 minutes in triphala group and for >240 min in paracetamol group. In writhing test, triphala showed significant analgesic activity (26.33±3.38, p<0.05) while paracetamol did not show significant analgesic activity (29.17±3.43, p>0.05) compared with control in 5 minute writhing count. Comparison between the two drugs, did not show any statistical difference (P>0.05) in both models. Triphala has immediate onset and short duration analgesic effect while Paracetamol has late onset with longer duration of action as analgesic. Triphala could be effective analgesic in visceral pain as shown in writhing test.

Pain is an unpleasant experience associated with tissue damage. It is a warning signal, primarily protective in nature, but causes discomfort and suffering which may be unbearable and incapacitating. It is the most common symptom which brings the patient to the physician [1] . Analgesics relieve pain as a symptom without affecting its cause. They are used when the noxious stimulus cannot be removed or as adjuvant to most etiological approaches to pain. Analgesics are divided into two groups, Opioid and Non-opioid / Non Steroidal Anti-inflammatory Drugs (NSAIDS). NSAIDS are the mainstay treatment for acute and chronic pain, which inhibits prostaglandin synthesis by inhibiting enzyme cyclo-oxygenase [1]. Opioid analgesics act by blocking the μ receptors in Central Nervous System (CNS) and relieve pain [1]. Multiple formulations of analgesics are available in the market containing different drug molecules. Of the total number of patients who seek treatment for pain, 50% are reported to be dissatisfied with the available pharmacological options [2].

Researchers have shown that some of the ancient medicines from Ayurveda have been proved useful in relieving pain. Triphala is a tridoshic formula of fruits of Terminalia belerica (Family: Combretaceae), Terminalia chebula (Family: Combretaceae) and Emblica officinalis (Family: Euphorbiaceae). According to Bhavaprakasha-Nighantu, triphala consists of equal parts of Haritaki, bibhitaka and amalaki . According to Kaiyadevn-Nighantu,

triphala consists of one haritaki, two bibhitaka and four fruits of amalaki [3]. Although mechanism of action of triphala is unclear, it has got many pleotropic effects. Preliminary research work carried out with triphala has proved its efficacy as an anti-oxidant, immunemodulator, anti-aging, analgesic, anti-cancerous, anti-microbial and blood purifier. It can be used in the treatment of cancer, constipation, indigestion, headache, inflammation, rheumatism, diabetes, leucorrhoea, ailments of eyes, skin diseases, dyspepsia, and liver enlargement etc [4,5,6]. In India, it is a highly esteemed drug in ayurveda which is being consumed from centuries in the treatment of a wide range of ailments [7]. Paracetamol is widely used over-the-counter analgesic and antipyretic. It is commonly used for the relief of headaches and other minor aches and pains. [8,9]. In recommended doses, the side effects of paracetamol are mild to non-existent although prolonged daily use can increases the risk of upper gastrointestinal tract bleeding [10] and may cause kidney or liver damage [11].

Preliminary studies have confirmed analgesic, antipyretic and ulcerogenic property of triphala in mice [12]. Therefore, the present study was taken up with the aim to evaluate analgesic activity of herbal formulation triphala and compare it with most commonly used analgesic paracetamol in mice using Eddy?s hot plate method (analgesiometer) and writhing test.

It was a prospective, interventional study and was conducted on Swiss Albino mice in the experimental laboratory at department of Pharmacology, Smt Bhikhiben Kanjibhai Shah (S.B.K.S) Medical institute & Research Centre, Piparia, Gujarat. The study was conducted only after receiving due permission from animal ethics committee, Sumandeep Vidyapeeth.

The study was performed with Swiss albino mice, 20-25 grams of either sex. The mice were brought from central animal house of S.B.K.S. Medical institute & Research Centre, Piparia. Animals were housed in appropriate cages in uniform hygienic conditions and were fed with commercial-pellet feeds. Water was made freely available except for 2hrs before the Writhing Test, when they were fasted.

The commercially available Triphala powder [equal proportionate (1:1:1) mixture of dried and powder fruits of three plants T. chebula, E. officinales and T. Bellerica] was used in a dose of 1 gm/kg/body weight orally [12]. For Paracetamol the appropriate adjusted dose extrapolated from dose used in similar studies conducted previously i.e., 1.45 mg/ 20g of mice [13] was used. The formulations were made as suspensions prepared in 2% Carboxy methylcellulose solution (CMC) mixed uniformly. It was fed to mice through oral feeding tube and 2% CMC solution alone was used as control in all groups.

Total 36 mice (Swiss Albino, n=36), were divided into two main groups. One group of 18 was used for hot late method while other group was used for writhing test.

For all the mice a pre-dose reading was taken before 30 minutes for both the tests which served as a base line data for further comparison after administering control/test drug.

Hot plate test is proposed by Eddy and Leimbach in 1953. It is a test of the pain response in animals, used in testing the effectiveness of analgesics by observing the reaction to pain caused by heat.

The control/test drug was given orally. The time taken for the animal to react in this fashion was noted every 30 minutes for 4 hours (30, 60, 90, 120 minutes till 240 hours) after administering control/test drug.

In Writhing test, chemical stimulus is given which by irritating serous membrane induce visceral or peritoneal pain and provoke a stereotyped behaviour – writhing (series of constrictions travel along the abdominal wall with turning movements of body and extension of hind limbs).

After the administration of oral CMC, paracetamol and triphla, with waiting period of 30 minutes the animals were treated with 0.6% acetic acid i.p (intraperitoneally). The number of abdominal constrictions (writhing) was counted for 5 min.

Results were expressed as mean ± SD and statistical analysis was carried out using graph-pad prism software version (4.05). Unpaired t test was used for comparison and p≤0.05 was taken as significant.

Paracetamol and Triphala both showed significant increase in reaction time (analgesic response) as compare to their baseline on eddy?s hot plate method. (Table 1)Triphala showed increased nociceptive response from 6.09 ± 1.16 seconds at baseline to 10.88 ± 1.15 seconds immediately after 30 minutes of drug administration. It showed maximum response of 13.04± 3.53seconds at 180 minutes. Whereas, Paracetamol showed its analgesic activity from 7.45±2.23 seconds at baseline to 11.18±2.55 seconds at 120 minutes suggesting delayed onset of response as compared to triphala group. It showed maximum nociceptive response of 12.00±2.64 seconds at 210 minutes and it was continued till the end of experiment at 240 minutes. 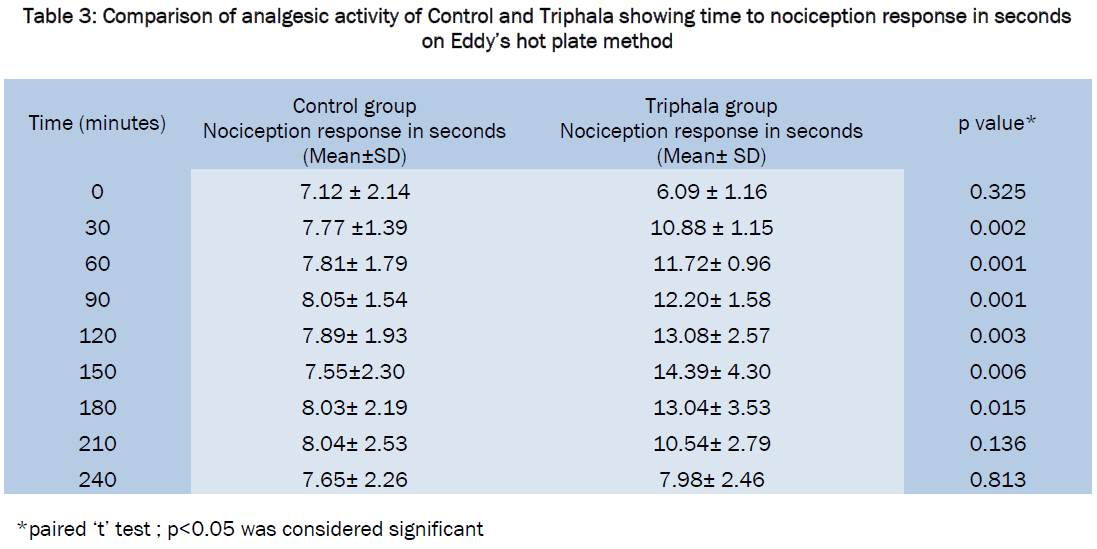 India is known as the “Emporium of Medicinal plants” due to availability of thousands of medicinal plants which has provided ayurvedic knowledge since ancient time [14]. Indians are using herbal drugs in day to day practice as home-remedies, health foods, over-the-counter (OTC) as self-medication and as prescribed drugs in the complementary and alternative systems of medicine [15]. Triphala is regarded as an important rasayana in ayurvedic medication [16]. Medicines of rasayana are believed to promote health, immunity and longevity. It is well known drug for its pleotropic effects, one of them is its analgesic activity [17].

Animal experiments are carried out to explore the actions of a potentially useful new molecule. Here the experiments were carried out using Eddy hot plate method and Writhing test for evaluating analgesic activity of triphala. In this study triphala showed significant analgesic activity. It showed faster onset of action and shorter duration of action as compare to paracetamol. Another study by Rasool M et al carried out at Vellore (Tamil Nadu) had also shown that triphala had analgesic effects in mice when it was compared with one of the Non Steroidal Anti inflammatory Drug (NSAIDS) [18].

In this study, the time course of action was also taken into consideration for measuring the nociceptive response for both the drugs. For Eddy hot plate method, it was found that triphala had immediate onset of analgesic action (at 30 minutes), which was short lasting (180 minutes) in comparison to paracetamol which had late onset (after 120 minutes) and effect was still continued later. As such the duration of action of paracetamol is 3 to 5 hours [19] so the reading of this study goes in hand with the suggestive facts for paracetamol. There were limited data about onset and duration of triphala as an analgesic.

Writhing test is used for screening of both peripherally and centrally acting analgesic activity. According to Deraedt et al [20] acetic acid when injected intraperitoneally produced an acute inflammatory response which increase the releases prostaglandin PGE2 and PGF2α from peritoneal fluid as well as production of lipooxygenase. Collier et al [21] showed that acetic acid acts by inducing release of pain mediators which are sensitive to NSAIDs and opioids. Thus writhing test represent the model for evaluation of analgesics for visceral pain. From the observations of the present study it was found that triphala and paracetamol both reduced the number of abdominal contractions (writhes) after acetic acid administration intraperitonially in comparison to the control group. This could be inferred as both the drugs were effective in pain induced by acute inflammatory mediators even in visceral tissues. However, on comparing the two drugs, triphala found to be more effective in controlling such visceral pain.

Thus, from the above experiments it can be said that analgesic activity of triphala could probably be because of the inhibition of effect of the release of endogenous substances that excite afferent pain nerve endings [21]. Although mechanism of action is unclear, analgesic effect of triphala in both models confirms that it may probably acts by both peripheral and central mechanisms [22]. Further studies are required for identifying the exact mechanism of action of triphala as an analgesic.

Herbal preparation could be an effective alternative in pain management. Herbal preparations offer advantages over allopathic preparations by virtue of their stability over a period, safety, sustained availability, and fewer adverse effects [23,24]. However comparative trials in human beings are necessary to establish its role as pain is subjective symptom having physical, psychological and emotional components. This type of evaluation could not be carried out in animal experiments, which is a major limitation of animal experiments.

This study is probably the initial step for evaluating analgesic activity of triphala. Very limited data was available regarding the use of triphala as an analgesic in humans. This study had tried to highlight various aspects related to dose of the drug, route of administration and time on onset of analgesia with triphala. Moreover pain is subjective in nature; therefore it is difficult to comment on the effectiveness of triphala as an analgesic purely on the basis of animal studies. Further limitation of the study was shorter duration and not performing experiment with various possible dose ranges. Despite the above limitations, triphala has clearly shown analgesic activity in mice using experimental models. However, more studies are required to elaborate various aspects of triphala with respect to its therapeutic benefits.

Although mechanism of action is unclear, triphala has immediate onset but shorter duration of action as analgesic as compared to paracetamol in animal models. It also had effect on visceral pain. Further studies with longer period of observation and more dose ranges are required before recommending the use of triphala as an analgesic. Studies related to triphala on human volunteers are also necessary to assess subjective degree of pain.