Dalbergialatifolia is commonly called as “Beete and sitsal”. In the present study the cerebroprotective effect of methanolic extract of bark of Dalbergialatifolia (DL) was carried out against the global model of ischemia in rats. The animals were pre-treated with DL for a period of 1week (500 mg/kg) p.o. The animals were anaesthetized with thiopentone sodium (45mg/kg) and infarction was induced by Bilateral Common Carotid Artery Occlusion (BCCAO) for 30 mins with the help of suture threads, the knots were released with the help of slip knots. The animals were allowed to re-perfuse for a period of 48 Hrs. Then the animals were sacrificed brain was decapitated. Biochemical estimations for SOD, CAT, MPO & MDA and histological examinations were carried out.

Stroke is one of the leading causes of death and disability in the world. WHO has estimated that between 1990 to 2020 the world will witness an increase in stroke mortality of 78% in woman and 106% in man [1]. Stroke is the world’s second leading cause of mortality, resulting around 6,000,000 deaths annually [2].It is estimated that the lifetime risk for stroke is between 8% and 10% [3].Pathogenically, stroke involves a heterogeneous group of processes. Vessel occlusions (ischemic stroke) account for 85% of all strokes, while primary intracerebral bleeding (hemorrhagic stroke) accounts for the remainde [4]. Ischemic stroke accounts for 87% of all strokes. Among persons aged 45 to 64 years, 8% to 12% of ischemic strokes result in death within 30 days [5].

Flavonoids possess a highly reactive hydroxyl group that gets oxidized by electron-donation, thus stabilizing the radical to a less reactive molecule. One way of reaction is the direct scavenging of free radicals, for example superoxide anions, singulet oxygen and lipid peroxyl radicals. Structurally important features defining the reducing potential of flavonoids are the hydroxylation pattern, α 3’,4’-dihydroxy catechol structure in the B-ring, the planarity of the molecule and the presence of 2,3-unsaturation in conjugation with a 4-oxo function in the C-ring. There is considerable evidence that flavonoids efficiently attenuate the deleterious effect of free radicals and reactive oxygen and reactive nitrogen species(ROS/RNS). Quercetin and some structurally related flavonoids, for example, showed a marked cytoprotective effect in PC12 cells exposed to H2O2 [6]. Also in PC12 cells, the addition of flavonoids or flavonoid-rich extracts suppressed the hydroperoxideinduced increase in ROS, thus improving cell survival [7,8].

Suzuki et al [9].administeredcatechin extract in drinking water to rats for five days before and during middle cerebral artery occlusion (MCAO) and reperfusion to examine their protective effects on various deteriorative processes following stroke. Catechins significantly ameliorated neurological deficits observed after reperfusion by the inhibition of inducible Nitric Oxide synthase(iNOS) expression and infiltration of neutrophiles. In addition, the formation of peroxynitrite was found to be decreased due to the potent radical scavenging properties of catechins.

Hong et al. [10] used green tea extract in the drinking water ad libitum for 3 weeks before ischemia in gerbils. This treatment reduced the infarct volume, the number of apoptotic cells, and lipid peroxidation, and inhibited the ischemia-induced hyperactivity.

Dalbergia latifoliais a large glabrous tree with a single stem and having a characteristic smell [11]. It is distributed in Bihar, Bundelkhand and Central India [12]. It contain dalbinol a new 12α-hydroxyrotenoid [13], sisafolincoumarin from seeds, β- sitosterol, also contain dalbergichromene, lupeol, latifolin and dalbergin from bark of the tree, heartwood contains latinone, neoflavonoiddalcriodon [14] and latinone, a substituted phenanthrene-1, 4-quinone was isolated from Dalbergialatifolia [15].Ethanomedicinally, the stem barks contain tannin is used for treatment of leprosy, obesity and worm [12].EtOH (50%) extract of the bark exhibits spasmogenic, and anthelmintic activity against Ascaridiagalli [16].Ethanomedicinally, the stem bark contain tannin is used for treatment of leprosy and worm [17]. Many species of Dalbergiaare important timber trees, valued for their decorative and often fragrant wood, rich in aromatic oils [18,19]. Traditionally various species are reported to be used as aphrodisiac, abortifacient, expectorant, anthelmentic,antipyretic, appetizer, allays thirst, vomiting, burning sensation, cures skin diseases, ulcers, diseases of the blood, reduces obesity, used in leucoderma, dyspepsia, dysentery, for diseases of the eye and nose, syphilis, stomach troubles, leprosy, leucoderma, scabies and ringworm [20].

The bark part of Dalbergialatifolia was collected in the month of june-2012 from forest of Tirupati, it was identified and authenticated by K.Madhavachetty, and the voucher specimen was deposited in Department of Pharmacology, Karnataka College of Pharmacy, Bangalore.

The plant material obtained was subjected to grinding using a mechanical blender to get fine powder of uniform size. About 250gm of the powder was treated with methanol in a soxhlet apparatus for 2h. The liquid extract thus obtained was subjected for evaporation to remove the excess of solvent under shade, which will give a solid mass of the drug extract. The yield of the extractwas calculated and stored for further use. The solid methanolic drug extract was further subjected to column chromatography for isolation of flavonoid, the flavonoid presence in the drug was confirmed with the help of chemical tests for flavonoids.

Albino male wistar rats (8-10 weeks old) weighing 250-280g, were used for the experiment. They were acclimatized for one week prior to experiment. Animals were caged in fully ventilated room, were maintained in 12:12 h light and dark cycle and were housed at temperature of 25 ± 2°C. They had free access to a standard chow diet and water adlibitum. All the experiments conducted on the animals were in accordance with the standards set for the use of the laboratory animal use and the experimental protocols were duly approved by the IAEC( Institutional Animal Ethical Committee).

Rats were randomly divided into 5 groups, 6 animals per group.

Occlusion: Surgical technique for the induction of cerebral ischemia was adopted from the earlier published method of AnshumanTrigunayat 2009. Under anesthesia midline incision was given. Common carotid arteries were identified and isolated carefully from Vago-sympathetic nerve. Ischemia was induced by occluding bi common carotid arteries (BCCAO) with thread for 30 min and reperfusion was allowed for 48 hr by removing the thread. Neck incision area was closed with thread using suture. The DL group animals were given pre-treatment for 7 days p.o (500mg/kg), standard drug (Allopurinol, 10mg/kg) was given 10 min before occlusion.

Histopathological studies were also performed and the results obtained were compared. 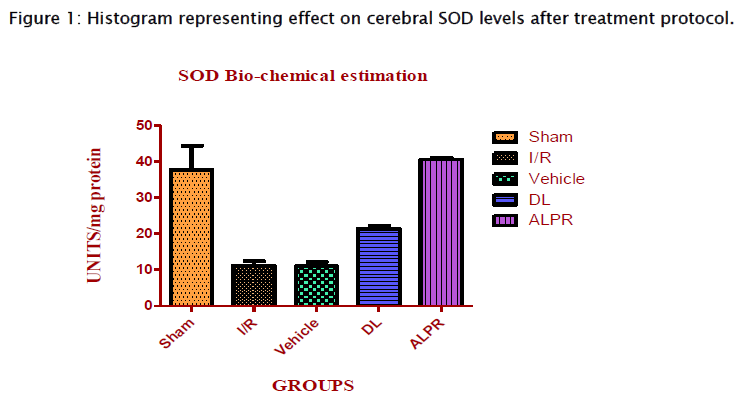 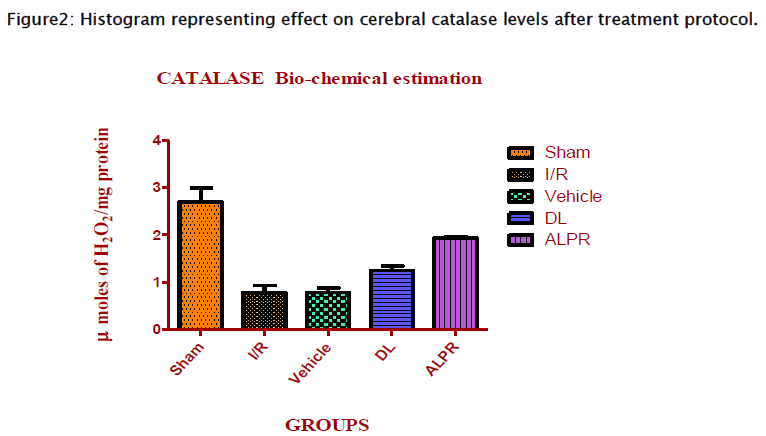 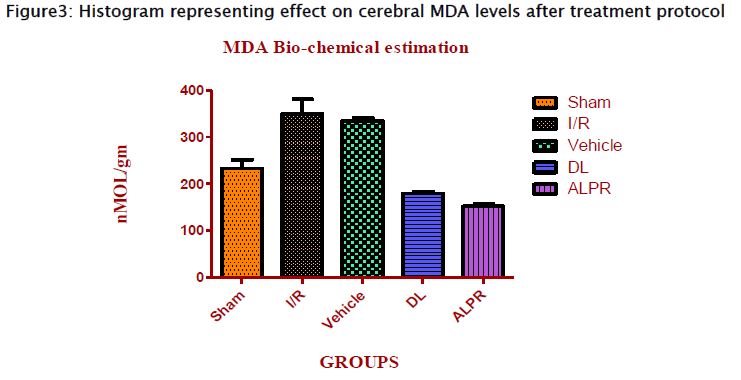 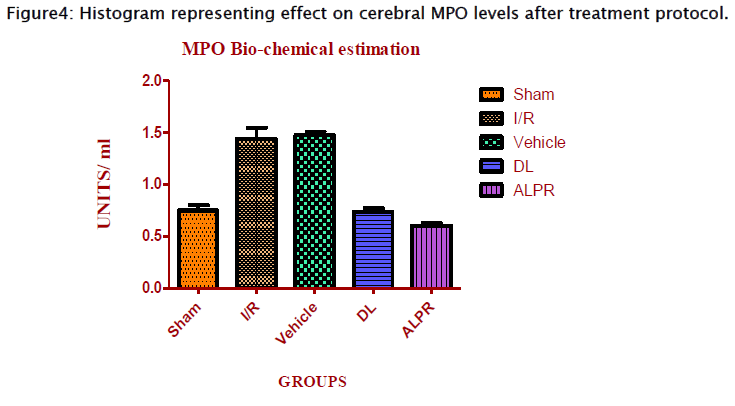 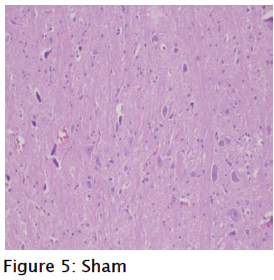 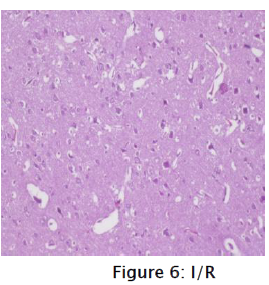 In sham group: The cerebral levels of the SOD, CAT, MPO and MDA showed no neurological deficit (Figure 1-4). The histopathological studies also showed there was no neuronal degeneration in the tissue (Figure-5).

In I/R group: The cerebral levels of MDA and MPO were significantly increased and decreased levels of SOD and Catalase found (Figure 1-4). The histopathological studies also showed there were neuronal degeneration, glial cell proliferation, congestion, hemorrhage, lymphocyte infiltration and vacuolation which indicated damage to the brain (Figure-6).

In vehicle group: The cerebral levels of SOD, CAT, MDA and MPO were nearer to the values of the I/R group (Figure 1-4). The histopathological studies also showed neuronal degeneration, congestion glial cell proliferation and vacuolationdepecting that there is no involvement of the vehicle in cerebroprotectivity. (Figure-7) 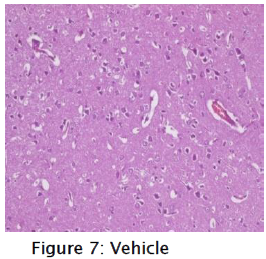 In DL group: The cerebral levels of SOD and CAT were significantly increased and the levels of MDA, MPO significantly decreased when compared with the I/R group (Figure 1-4). The histopathological studies showed minimum of neuronal degeneration, mild vacuolationrelatively lower congestion (Figure-8). 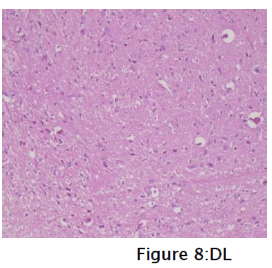 In Allopurinol group: The cerebral levels of SOD and CAT were significantly increased and the levels of MDA and MPO were significantly decreased when compared with the I/R group (Figure 1-4). The histopathological results showed not much considerable damage to the neuronal cells only mild vacuolations and hemorrhage were seen (Figure-9). Lipid peroxidation has been established as a major mechanism of cerebral injury. The mechanism involves a process whereby unsaturated lipids are oxidized to form additional radical species as well as toxic by-products that can be harmful to the host system [26].Polysaturated lipids are especially susceptible to this type of damage when in an oxidizing environment and they can react to form lipid peroxides [27]. Lipid peroxides are themselves unstable and undergo additional decomposition to form a complex series of compounds including reactive carbonyl compounds [28].

Reactive species can be decreased or eliminated by a number of enzymatic and nonenzymatic antioxidant mechanisms. SOD, which catalyzes the dismutation of the superoxide anion (O-2) into hydrogen peroxide and molecular oxygen, is one of the most important antioxidative enzymes [29].

In the present study, SOD and CAT activity decreased in the ischemic reperfused group compare to sham group and the results were in agreement with previous studies [29].This may be due to an excessive formation of superoxide anions. A decrease in SOD activity can result in the decreased removal of superoxide anions, which can be harmful to the brain. The decline in the enzyme level may be explained by the fact that excessive superoxide anions may inactivate SOD, thus, resulting in an inactivation of the H2O2 scavenging enzyme. The reduced SOD and CAT activity were increased by administration of the DL significantly when compared with the I/R group.

Inflammation is an important component of the pathogenesis of cerebral ischemia. Proinflammatory molecules such as NO synthase-2 (NOS 2), cyclooxygenase-2 (COX 2), chemokines and adhesion molecules have been implicated in the development of cerebral ischemic injury. Myeloperoxidase (MPO) is a highly cationic glycosolatedheme enzyme secreted by activated phagocytes at site of inflammation. MPO is an enzyme that is involved in the production of free radicals. Indeed, MPO uses H2O2 and NO2¯ to generate reactive nitrogen species [30].

The activities of enzyme MPO was also increased in ischemic reperfused group compare to sham group. Administration of the DL shown inhibition of inflammatory mediators when compared with the I/R group as well as the standard group.

The present study was conducted on the basis that flavonoids and flavonoid containing parts of the plants have good anti-oxidant properties by the evedences of previous studies conducted and as the methanolic extract ofDalbergialatifoliaconstitutes different class of flavonoids in it, it exhibited significant anti-oxidant activity resulting in Cerebroprotectivity when compared with the I/R group and the standard drug (Allopurinol) group. The activity was confirmed by the measurement of the various bio-chemical markers such as CAT, SOD, MDA and MPO along with the comparison of the extent of damage to the neuronal tissues with the help of the histopathological slides.