In an Impact Assessment Study (2012) it is said that the problems faced by sugar mills is related to supply of stale sugarcane, manual entries on cane purchase centres and mills capacity is not fully utilized. The long distance between agricultural land and sugar mills decreases the quantity of sucrose which affects the production of sugar. Farmers convert their sugarcane supply to jaggery producers developing loss conditions for sugar mills.

Commission of Agricultural Costs And Prices (2015) gave ‘Price Policy For Sugarcane 2016-2017 Sugar Season’ in which they recommended that the state advised price imposed by states on sugar mills is in no continuation with ex- mill sugar price which results into cane arrears and subdues [2]. Inequity in water use among different states as sugarcane consumes 70 percent of irrigation water, thus, conscious policy making is required to achieve satisfactory production of sugar per drop of water.

The main objectives of the research work are:

Uttar Pradesh lies in the Northern part of India. Its latitudinal and longitudinal extent is 23°52'N to 30°24'N and 77°5'E to 84°38' E respectively. Uttar Pradesh is the fifth largest state of India covering an area of 240,928 sq km constituting 7.33% of land area of India. Uttar Pradesh is bounded by Nepal and Uttarakhand in the North, Himachal Pradesh in the North-west, Haryana, Delhi and Rajasthan in the West, Madhya Pradesh in the South, Chhattisgarh and Jharkhand in the South-East and Bihar in the East. Ganga is the main river of this region having Yamuna as it major tributary. Uttar Pradesh lies in the sub-tropical belt of India where mean annual temperature ranges between 17°C to 24°C. In the terai belt of Uttar Pradesh the rainfall varies from 100-200 cm while in the Western U.P. it ranges from 50-100 cm. Alluvial soil is the dominant soil of the region.

The present research work is based on both primary and secondary data. Primary survey is conducted using questionnaire method for sugar mill owners of the selected area. The secondary data has been collected from the Sugarcane Department U.P., Uttar Pradesh Sugar Mills Association (UPSMA). Other information has been collected from U.P. government websites, published research papers, books, newspapers etc.

Table 1: Showing the growth of sugar mills in each district of Uttar Pradesh. 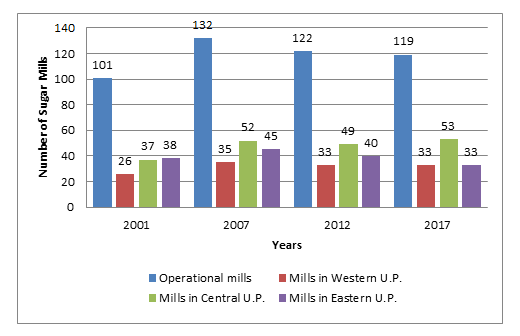 Graph 1 depicts the trend of growth of sugar mills in Uttar Pradesh. An upward trend is seen between the year 2001 and 2007 but the overall trend is sloping downward. Among each zone of Uttar Pradesh only central zones has showed a rising pattern after 2012. Both Western and Eastern zone have equal number of sugar mills but the difference is the number of sugar mills in Eastern U.P. are constantly falling though the number is constant in Western U.P. for the year 2012 and 2017.

Based on the above data the distribution of sugar mills in each district of Uttar Pradesh for their respective years are as follows (Figure 2). 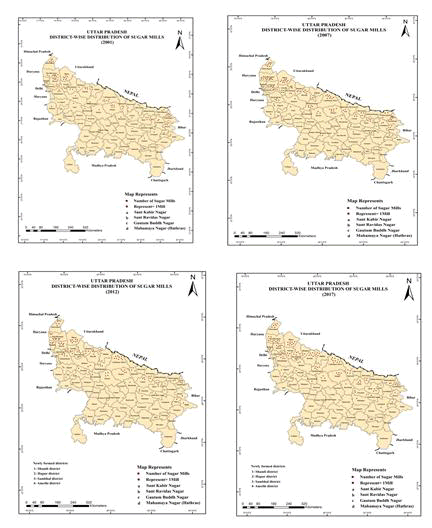 Uttar Pradesh is the fifth largest state of India having agriculture as the main economic activity. Lying in the great plains of India and having alluvial soil as the dominant soil of the region, Uttar Pradesh is the most fertile area of India. Sugarcane industry is the major agro- based industry employing more than 70 per cent of the population of the state. Uttar Pradesh is the largest producer of sugarcane in India and is also known as the sugar bowl of India because of the largest production of sugarcane and having highest number of sugar mills. The growth of sugar mills in Uttar Pradesh is showing a downward pattern and the distribution of the sugar mills in each district of the state is showing a large number of closures. The sugar mills are dealing with the problems of out-dated technology, lack of investment, lack of research and development in this sector and high rate of state advised price. All these problems make it difficult for the sugar mills to work in a proper condition and to produce a satisfactory amount of sugar. There is a need of a committee working for the welfare and maintenance of sugar mills, a time to time check-up of the machineries and establishment of government sugar mills can make a situation somehow better to deal with.

This paper is M.Phil. Research work. I would like to thank my supervisor Dr. Vipin Kumar for guiding and supporting during this course work. Without his help this research would never be able to complete successfully.