Pharmacology, Phytochemistry and Safety of Aphrodisiac Medicinal Plants: A Review

The history of sexual medicine and management of male sexual dysfunction (MSD) is as old as human civilization. The modern life styles and environmental conditions have increased prevalence of MSD with age. To address this problem a number of therapeutic strategies including the use of medicinal plants have been advocated for management of MSD. Large numbers of research papers regarding aphrodisiac activity of medicinal plants have been published in past few years. This review compiles data on the potential aphrodisiac activity of medicinal plants possessing effective dose of less than equal to 200 mg/kgbw or equivalent. The toxicity studies and phytochemical data available for the active extract or active plant part have also been incorporated in this review. Data regarding plant part, dose, animal model, compounds isolated and mechanism of aphrodiasic activity was tabulated. Medicinal plants possess an untapped source of aphrodisiac molecules. The review identified that Bryonia laciniosa, Caesalpinia benthamiana, Ferula harmonis, Montanoa tementosa, Syzygium aromaticum, Turnera aphrodisiaca, Spilanthes acmella, Turnera aphrodisiaca, Turnera diffusa, and Tribulus terrestris plants possess potential aphrodisiac activity. The safety in long term usage and low cost may be added advantage associated with use of herbal aphrodisiacs.

A human male may suffer from MSD at any stage of life but its risk increases with age. A population based study in US revealed that prevalence of MSD was 12 percent in those younger than 59 years, 22 percent in those 60 to 69 years of age, and 30 percent in those older than 69 years [3]. As per an estimate over 320 million people in the Westernized nations will be develop MSD by 2025 [4]. The current epidemiological data suggests that MSD needs immediate medical intervention and newer therapeutic strategies are required for its management. A number of treatment options are available for management of MSD. These options includes psychological and behavioral therapy, non surgical treatments using constructive rings and vacuum pumps, surgical treatment such as penile prosthesis, penile implants and venous ligation, hormone replacement therapy and intervention of chemotherapeutic agents [5]. The chemotherapeutic agents used for treatment of MSD are known as ‘aphrodisiac’.

Discovery of oral phosphodiesterase type 5 (PDE5) inhibitors particularly sildenafil (Viagra), tadalafil (Cialis), and vardenafil (Levitra) has revolutionized treatment of MSD [6]. Sidenafil citrate is the most prescribed PDE5, recommend in almost more than 70% of patients suffering from MSD. Mild to moderate headache, facial flushing, nasal congestion and dyspepsia are the most common adverse effects of PDE5 treatment [7]. Severe effects on PDE5 treatment have been reported in patients suffering from hypertension, hence careful clinical examination is a must before prescribing PDE5.

The side effects associated with these synthetic drugs necessitated search for safer and effective aphrodisiac agents especially of herbal origin. Medicinal plants represent an extraordinary reservoir of active ingredients [8,9]. Aphrodisiac activity of medicinal plants from a number of medicinal systems especially Ayurvedic [10] and Traditional Chinese medicinal has been reported [11]. Yohimbine, an indole alkaloid extracted from the bark of West African yohim trees was the first natural aphrodisiac molecules introduced for management of MSD. Several clinical trials reported various efficacy rates of yohimbine ranging from 34% to 73% [12] compared to Viagra. Approval of yohimbine by Food and Drug Administration, USA for clinical use, further propelled use of plant based aphrodisiac agents and intensified research in this area. The plant based aphrodisiac agents are relatively low in cost and safe as compared to synthetic PDE5. 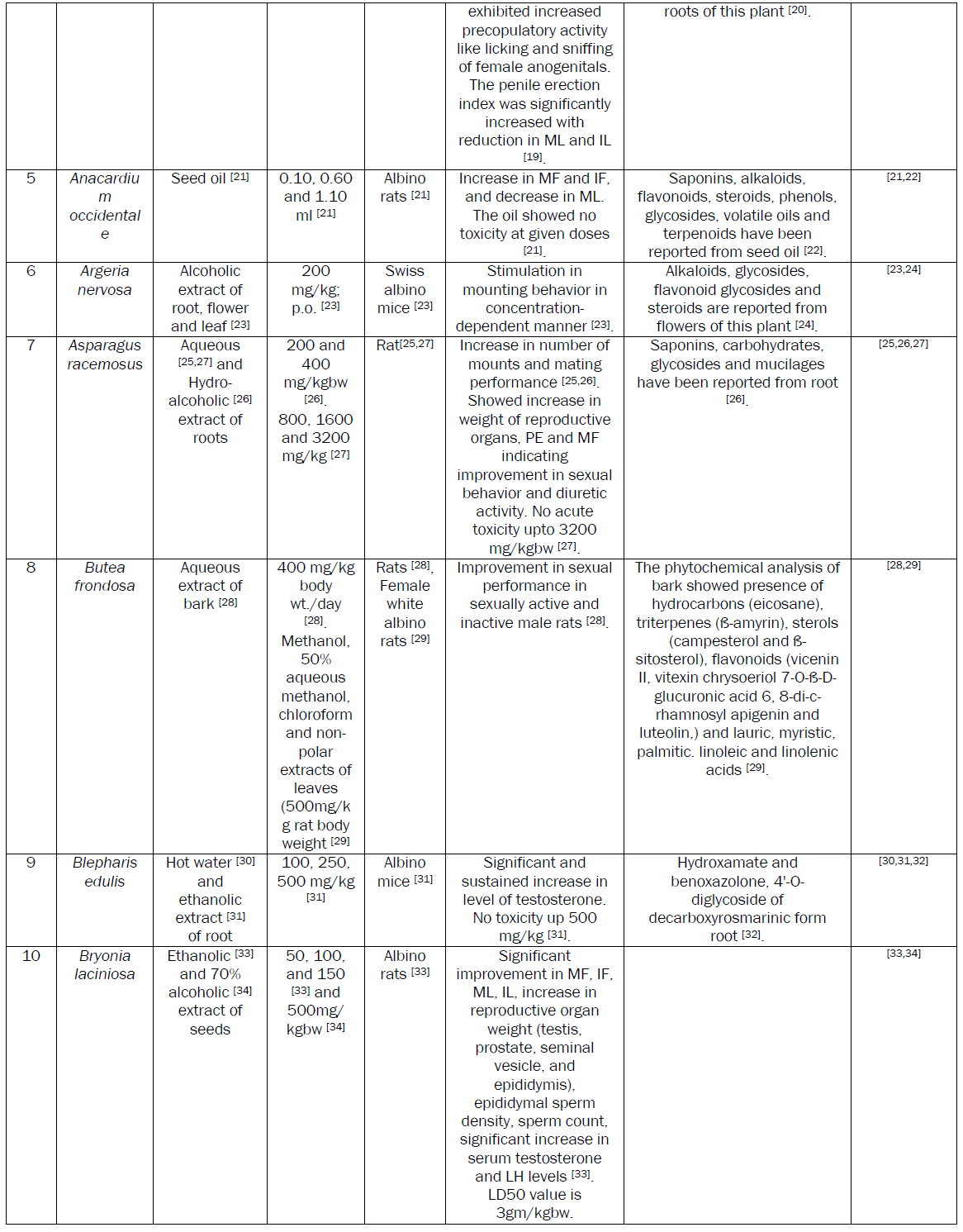 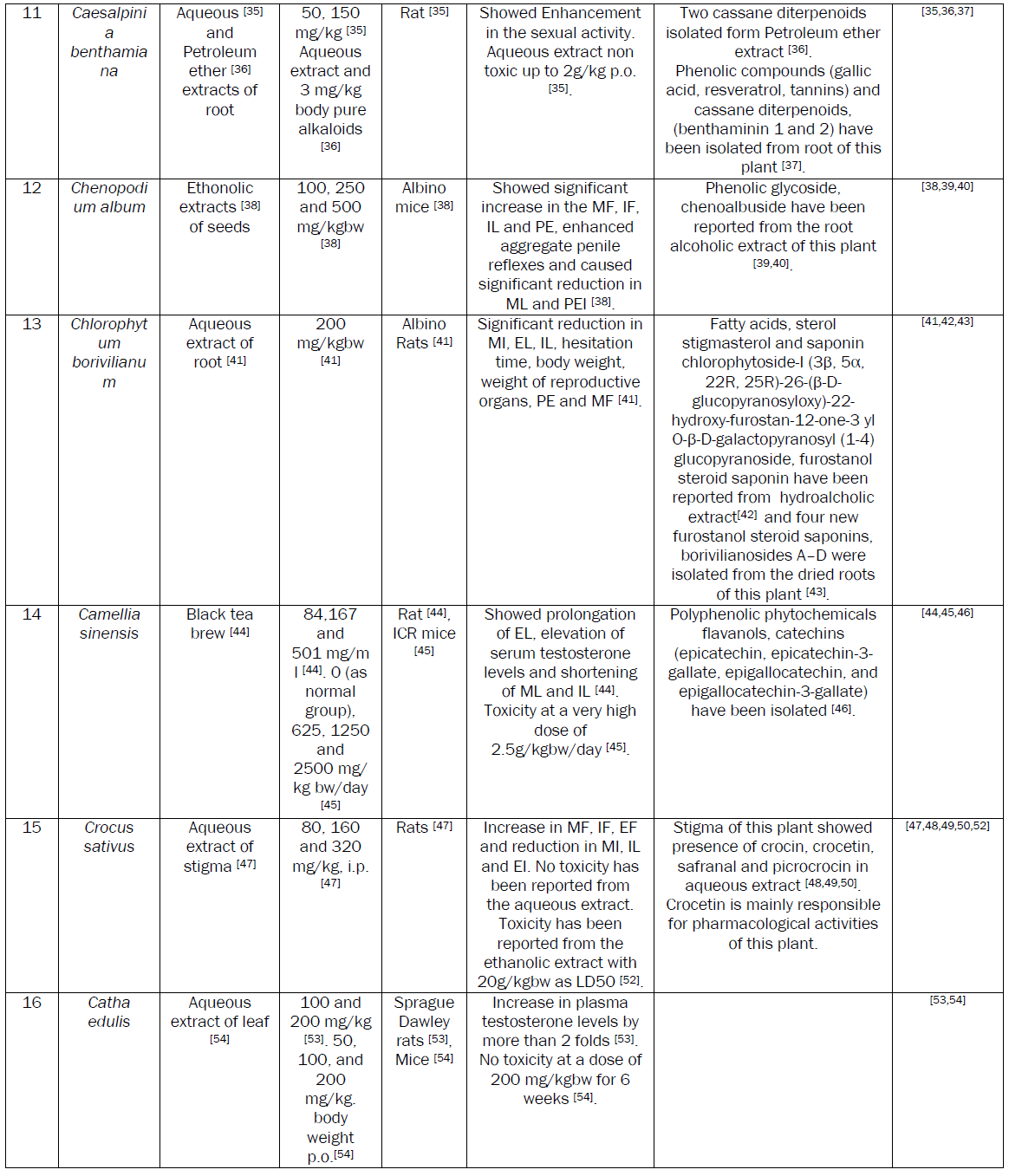 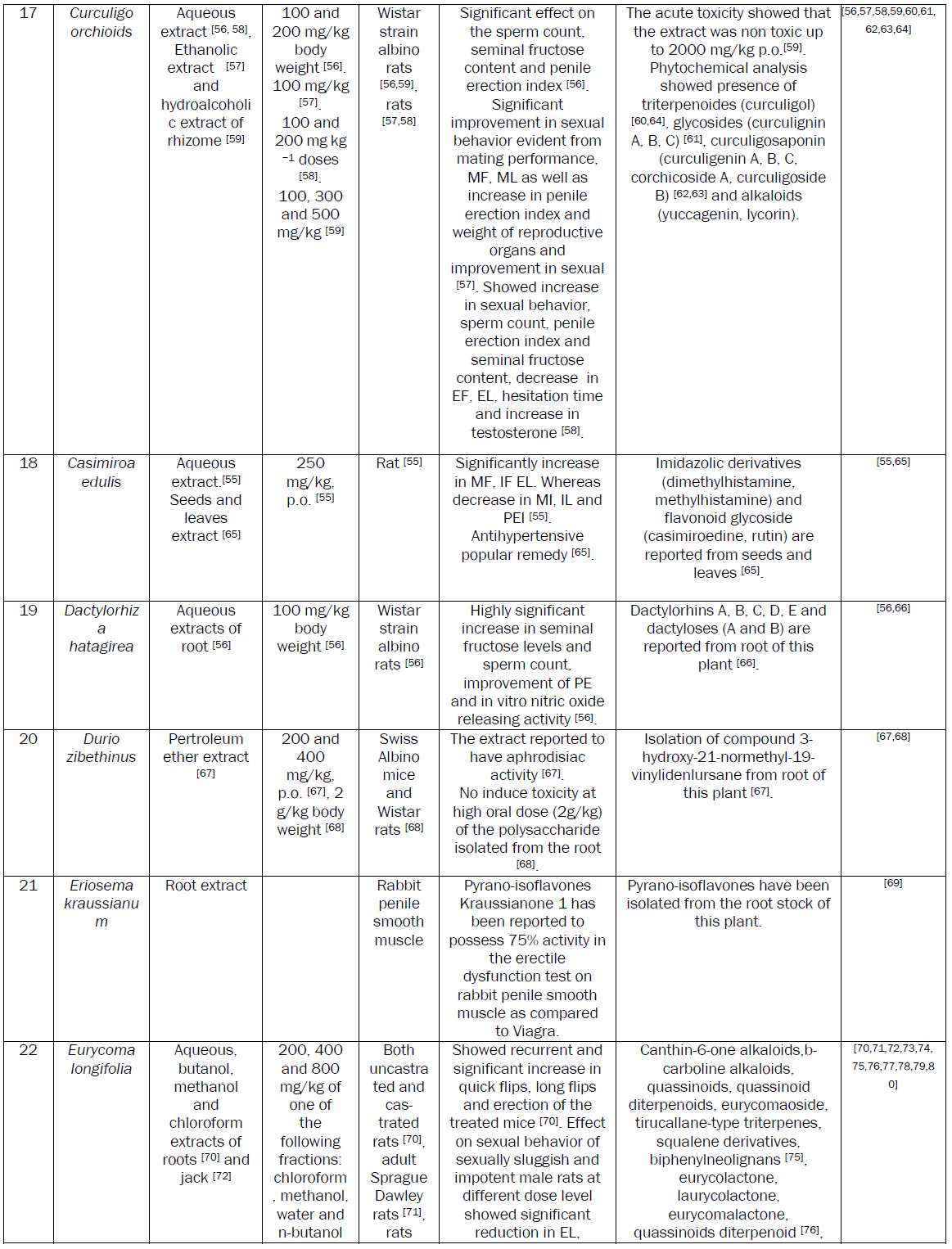 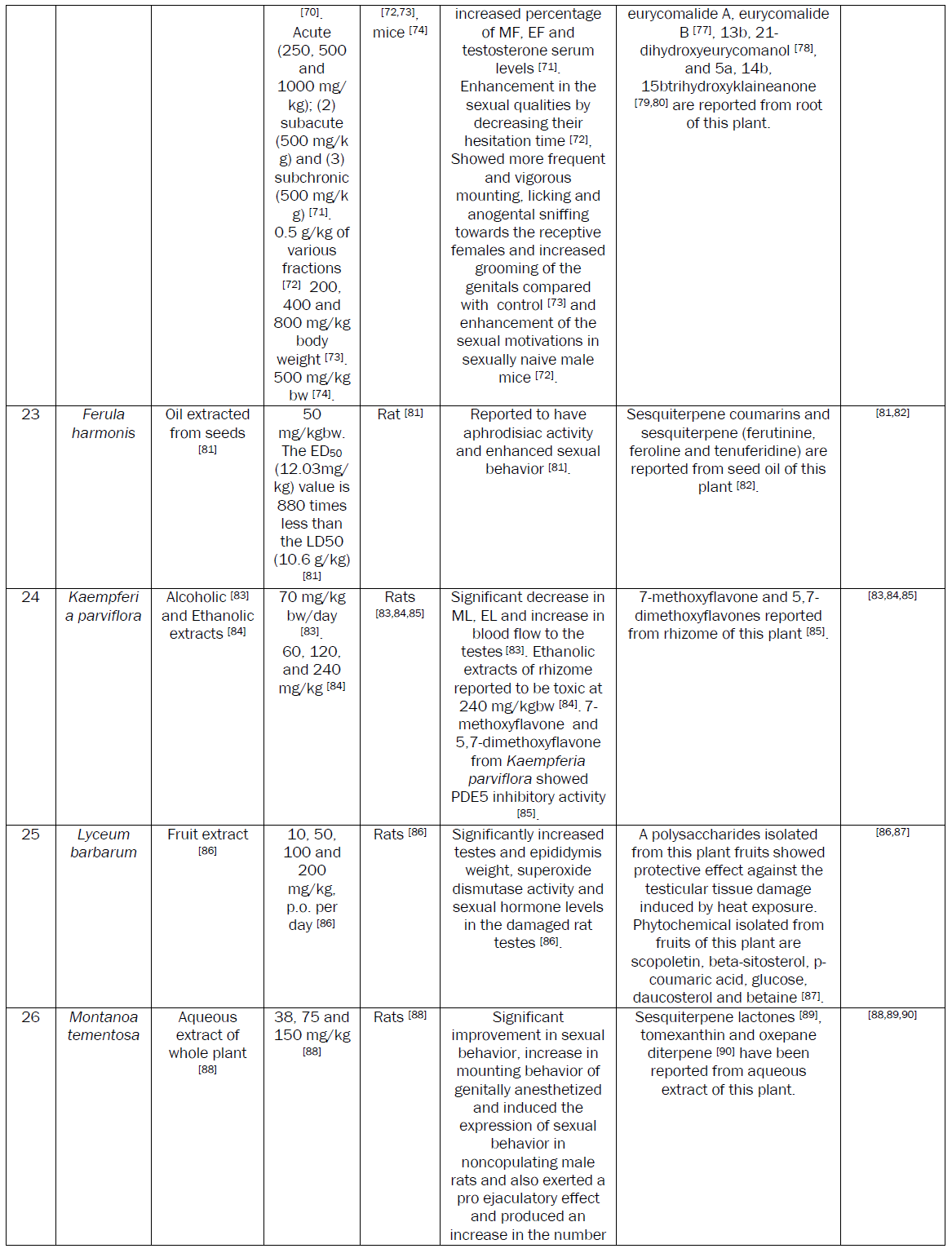 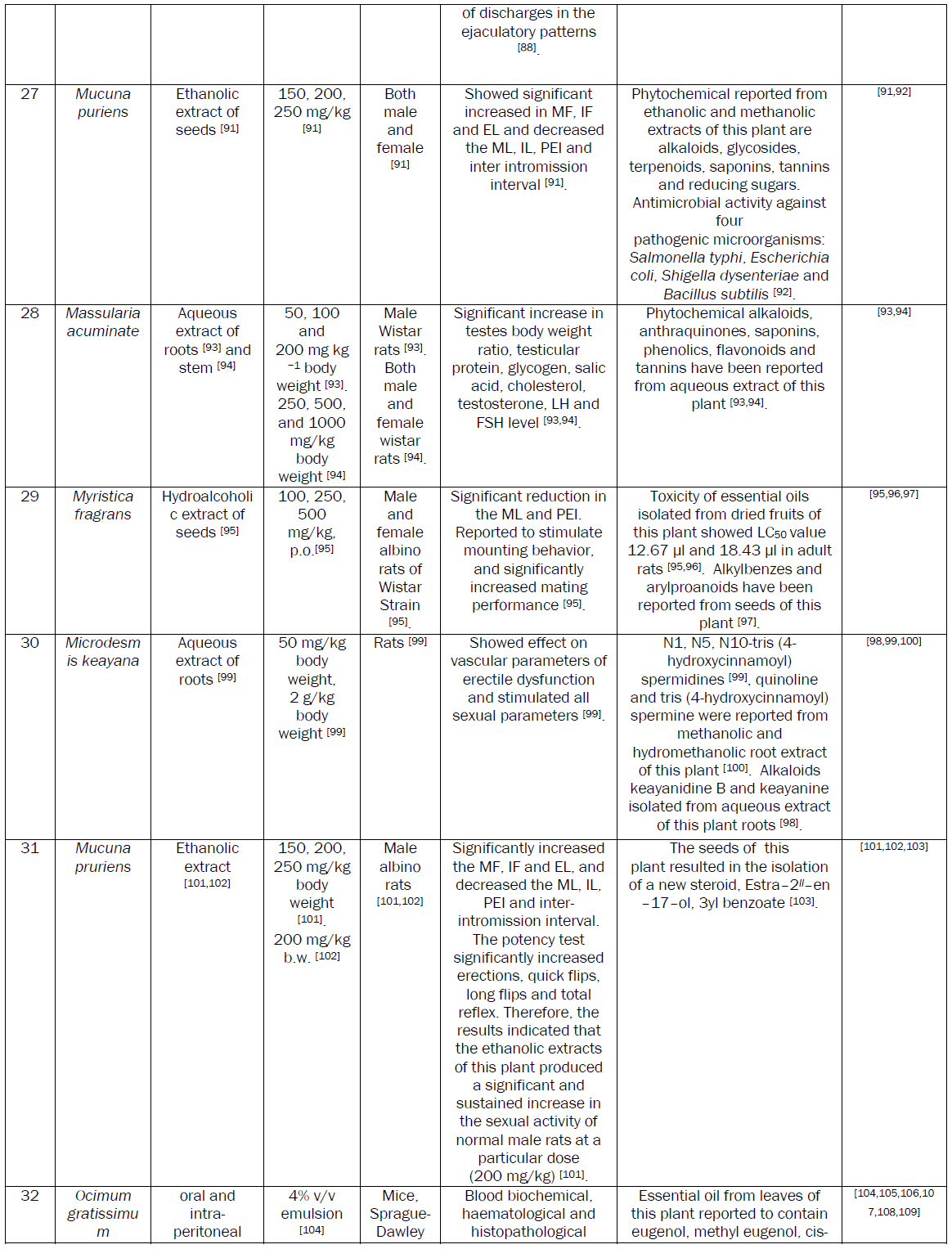 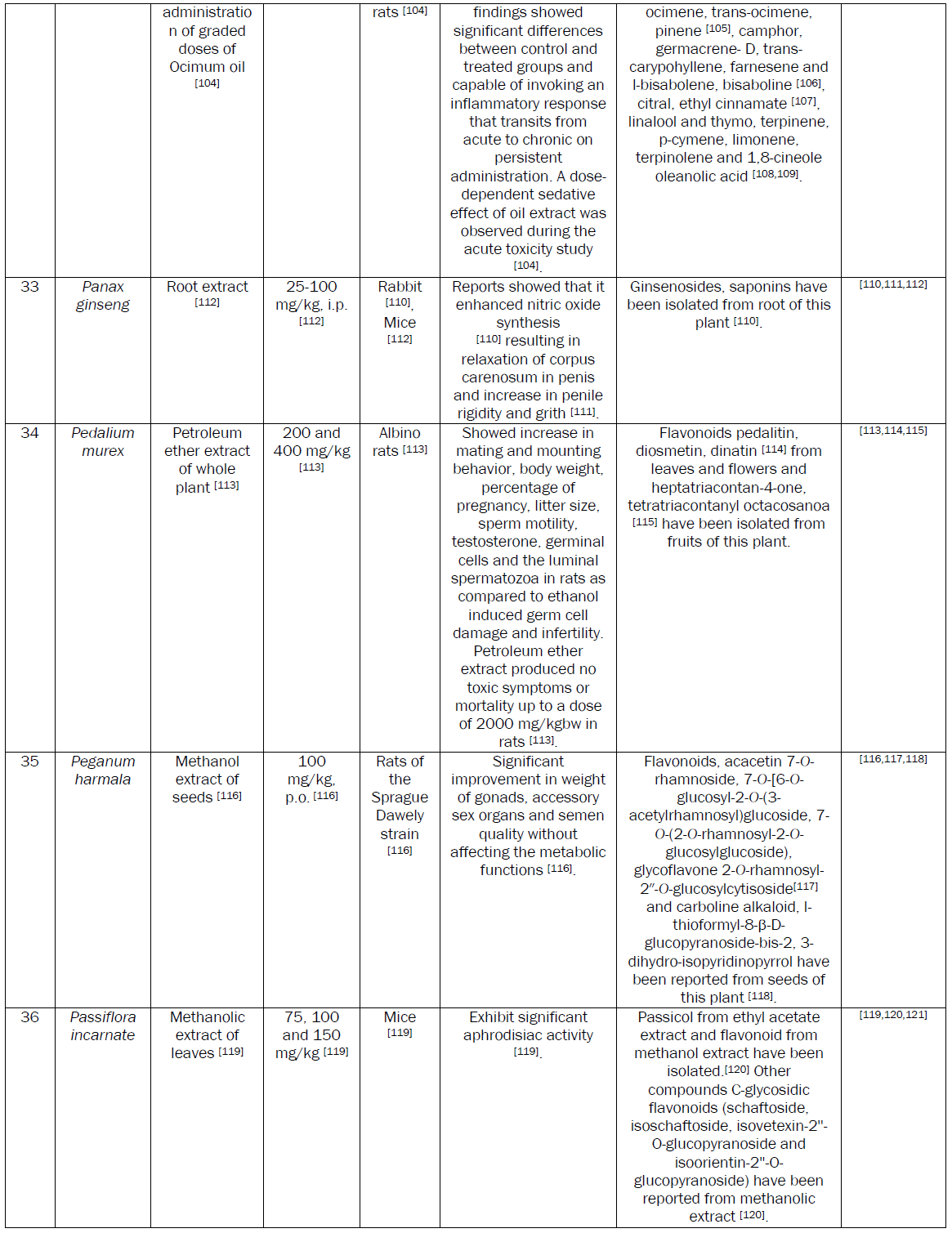 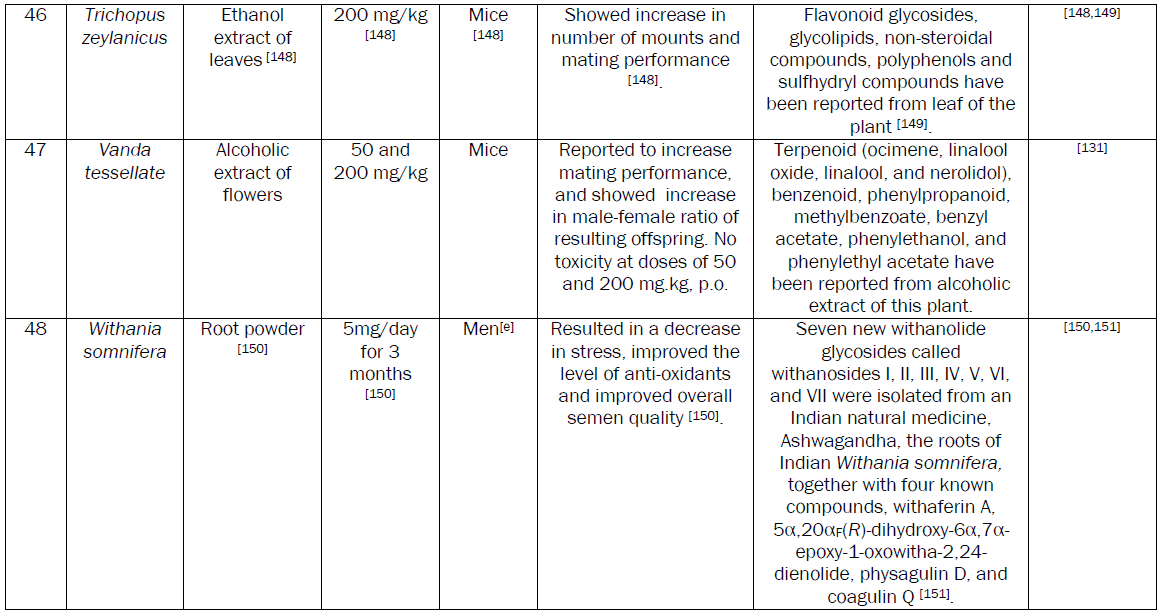 The demand for herbal drugs has increased in developed as well as developing countries because of their good aphrodisiac activity and safety. The review identified that Bryonia laciniosa, Caesalpinia benthamiana, Chlorophytum borivilianum, Ferula harmonis, Montanoa tementosa, Mucuna pruriens,Syzygium aromaticum, Turnera aphrodisiaca, Spilanthes acmella, Turnera aphrodisiaca, Turnera diffusa, ,Tribulus terrestris, Turnera aphrodisiaca and Withania somnifera plants possess potential aphrodisiac activity. The ED50 of active extracts of these plants have been reported to be less than equal to 50mg/kgbw. Two potential aphrodisiac compounds namely 1,3,6,8-tetrahydroxy-2,5-dimethoxyxanthone and 1,6,8-trihydroxy-2,3,4,7-tetramethoxyxanthone from Securidaca longepedunculata relaxed the corpus cavernosal smooth muscle by 97 % as comparison to sildenafil where as kraussianone 1 from Eriosema kraussianum relaxed rabbit penile smooth muscles by 75% as compared sildenafil. These purified phytochemicals may be picked up for large scale clinical trials in drug discovery programme. No toxicity has been reported at effective dose of the extract possessing aphorodisc activity in the above mentioned plants. In safety studies, the LD50 of some of the plants was much higher as compared to ED50. The reported LD50 is 20g/kgbw for Crocus sativus [52], 2g/kgbw for Pedalium murex [109] and 2.5g/kgbw for Camellia sinensis [45].

It is concluded that medicinal plants possess an untapped source of aphrodisiac molecules. The safety and low cost may be added advantage associated with use of herbal aphrodisiacs.