Agriculture and agricultural farming are a major source of income for farmers in the outskirts of Delhi contributing farming as a high asset business. But new startups like Khetify have managed to earn not only huge profits but also acquire funding from venture capitalists. The farmers of Delhi have preferred to traditional method of farming called as “Paramparagat Krishi Vikas Yojna” under the project of National Mission of Sustainable Agriculture (NMS A). The villages of Delhi have been grouped into clusters; each comprising of 20 hectares or 50 acres of land and 20-50 farmers respectively. Money is the primary need of the farmer and irritation facility is always needed by them as well. The survival of farmers is crucial to the nation’s security and well-being. The farmers require a reasonable market price for their produce and also an affordable labour. They demand a storage facility though ready to pay rents for it. As many as 7000 small urban farmers are estimated to exist around Delhi. Starting farming in Delhi is not a big deal but making a profit is tough. However, several awareness programmes like usage of technologies and latest innovative organic methods of farming have been organized by Delhi government and NGOs through workshops to educate the farmers of Delhi city to become entrepreneurs and competent enough to double their income in agricultural farming. Apart from that, the farmers or cultivators in Delhi have been provided with agricultural equipment and subsidy to purchase seeds and they are also trained to prepare bio-fertilizers and herbal spray to protect their crops. All possible efforts are made to prepare good quality, natural many from cow-dune for smooth farming in cost-effective manner for better performance and benefits.

The farmers earn their income through various sources like crop cultivation, horticulture, dairy , poultry , fisheries and non-farm activities. The agricultural farming in the villages of outskirts of Delhi is being promoted by the government recently in view of the implementation of farming technologies and methods along with maximization of agriculture production and doubling of farmers’ income thereof.

The main reason behind non-profitability of farming is due to low food prices. So, as per the government trade policies the farm incomes are kept low when the prices that consumers pay and the prices what farmers get. Actually, the Government has been providing more subsidies rather than investments keeping the agriculture as a low-level sector. Low-level equilibrium is a kind of hindrance for new investments and it finally leads to poverty in the society [1]. Had the usual farm subsidies been used for investments, the growth of agriculture would have been satisfactory.

It is mainly because of family pressure that they are continuing farming. Small farmers those who have land holding less than 10 acres, do not enjoy most of the government schemes and policies. Major reasons; farmers do not want their offspring to enter into farming because of repetitive losses caused by unseasonal rains, drought, floods and pest attacks [2]. There are startups of small scale urban farming for individual cultivators. For example, there are successful startups in Delhi like Ketify, Edible routes. Urban farmers by choice are catering to the eco- conscious urbanites who would like to grow their own rooftop fruits and vegetables. Urban farmers by default are not earning what they should be. But some of them have gradually been enveloped by Urban development.

As per the survey, the Delhi farmers found the successful implementation of M.S. S waminathan commissions recommendation. The Delhi government promised to pay the minimum support prices (MSP) different from the price offered by the Centre as per the Swaminathan Commission. The Delhi Government data states Delhi as having about 20,000 farmers who work on 75,000 acres of agricultural land.

However, in Delhi, agriculture is on decline. When farmers are gradually losing their intere st in farming then dependency on the imports increases. The gap is filled by investors and these investors would invest when the trade flows and not due to requirements of local people. Besides, Fruits and Vegetables in Delhi as grown in 100 hand 43,700 ha individually give rise to a production of 1000 tonnes and 6.27 lakh tonnes respectively. Flower crops are also grown in 449 ha with a production of 25,007 tonnes, Important vegeQbles such as tomato, brinjal, chilies, okra, cauliflower, cabbage, carrot and raddish are produced in protected conditions. Floriculture ventures are performed by gardeners under open (for gladiolus) and protected (for roses) conditions.

Reforms in farming for doubling farmers’ income in Delhi

Small and marginal farmers have nearly 77 per cent of holdings, comprising less than 4 acre s of land each. According to the Economic Survey, a very small portion of Delhi’s population (say about 0.7 l per cent meaning 39,457 people) is engaged in agricultural activities [3]. So, there is a small number of farmers who are basically landowners, besides, a significant number of contract labourers engaged in farming would receive no benefits.

MS Swaminathan who was a agriculture scientist selected Jaunti village in Delhi as the testing ground for use of imported high-yielding and [email protected] seeds for an excellent yield result from 8 to 24 quintals per 0.4 hectare (ha). That time the MSP of wheat was fixed at Rs 76 per quintal whereas the seeds produced in the village were sold at Rs 300 per quintal. So, Jaunti became the center of prosperity to farmers and all (Figure 1). 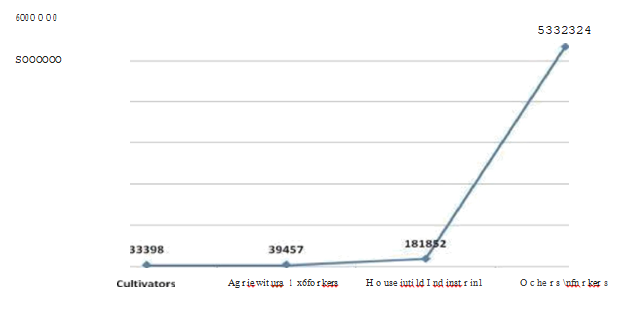 Irrigation problem is still prevailing in many parts of villages of Delhi outskirts and the basic facility for wetting the field and watering crops is not coherent with requirements (Figure 2). 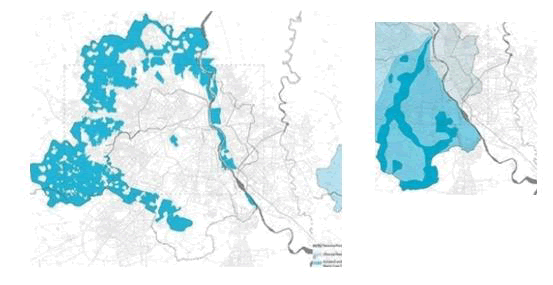 Jaunti’s picture of the agrarian distress depicts that the agriculture sector has now witnessed a change from food crisis to a farm crisis. Truly speaking, the agricultural production in Delhi takes place along the periphery of the city in lower quality soil. A thick layer of sludge has settled at the bottom of the Najafaarh and Yamuna belt which does not allow water bodies to purify around water. Therefore, the groundwater which is a primary source of irrigation for crops is not able to benefit the cultivation. The agricultural produce gets traded number of times before it reaches the consumer resulting in the increase of the cost and inefficiency of marketing.

The total cropped aha of 52, 816 hectares in 2000-2001 was reduced to 34,750 hectares in 2015-16 resulting in 2.28 per cent reduction in the agriculture area each year. It is say that the cause for such steep reduction in agriculture farming is due to fast urbanization and shift in occupational pattern for the last two decades, according to the survey report. The fish production due to rapid urbanization has reduced to 740 tonnes in 2015-16, which is nearly 68 per cent decline compared to 2003-2004 repon. The supply of seasonal vegetables are made because its demand remains the same which results in high soaring of prices during irregularities such as inadequate irritation, lack of fertilizers, etc. Azadpur Mandi which is a wholesale market thou Rh remains flooded with middlemen and occasionally with consumers, so due to irregular production at times for said reasons and malpractices like hoarding and black marketing in the supply chain, the prices of certain vegetables like onions and tomatoes remain soaring.

Delhi Government’s Scheme to Supplement Farmers’ Income Under the 'Muxhyanmantri Kisan Aaye Badhotri Solar Yojna' of Delhi government which aims to increase the income of farmers by three to five times in the national capital through solar installations [4]. Actually, the scheme aims at building power generating units on agricultural land without interfering the cultivation holdings. The farmers will set Rs l lakh per acre by the developers in lieu of land lease. The farmers’ income is expected at Rs 20,000-30,000 per acre. Apart from that, the cultivators are allowed to utilize l000kWh per acre of free electricity.

Under this scheme, it was suggested to have Solar Panels installed in such position so that the farming should not be hindered and the farmers will have an additional earning amounting to Rs. 33741 per month per acre of land [5]. It is also assumed that this scheme would be giving them five times additional income initially resulting in multitude increase in future. However, it is presently estimated to benefit farmers Rs.20000 per acre per year.

There are fundamentally three important ways to enhance the income of farmers, like increasing the cross income, reducing the costs and stabilizing the income. Major sources of growth in farm income may be accelerated through certain measures such as:

Agricultural output is achieved through increase in productivity per unit of land with creative measures like improving farmers’ facility for credit, insurance, common markets, irritation, electricity and roads, restoring soil health, agricultural markets, dairy processing facilities and encouraRinu them to diversify into non-cultivation activities. A major problem of black marketing created by middlemen needs to be addressed because they purchase products with farmers and sell them at high prices thereby increasing cost. Hence, there is a huge map between the price at which a farmer sells his produce and that at which the consumer buys it.