With the urbanization, human population and drawing of natural resources expanding, which are closely associated with intensification of industrial activities such as mining, mill tailing, metal finishing, electroplating, nuclear power testing, nuclear waste disposal, electricity generation in nuclear reactors and accidents resulting from nuclear power generation, contribute to the environmental contamination by hazardous metals and radionuclides [1-4]. Nuclear power poses potential threats to living organisms and the environment due to the long-lasting radioactive pollutants produced from nuclear leakage and unsuitable disposal of nuclear waste [5-6]. Radioactive pollution is gaining increasing attention with the recent bloom of nuclear plants. Among the radioactive pollutants, 90Sr is one of the most harmful radioactive nuclides, and it comprises one of the greatest proportions of radionuclides released from the Fukushima Daiichi Nuclear Power Plant accident in 2011 due to the magnitude 9.0 earthquakes and tsunami. There are several methods to manage the radionuclide pollution, such as physical method, chemical method and phytoremediation method [7-9]. However, there are some deficiencies in these methods. There has been a tremendous amount of attention given to the use of mineral - microorganism systems for removal of radionuclides and heavy metals from solutions.

Bentonites have been proposed as buffer materials in the geological disposal system of high level nuclear waste [10]. With montmorillonite as a principal component, bentonites are expected to strongly adsorb fission products such as 137Cs and 90Sr. Montmorillonite is a constituent clay mineral of various soils, sediments in reducing environments, and the major component of bentonite, which is a candidate material for the backfill of radioactive waste repositories [11]. Montmorillonite acts as a sorbent for a variety of metal cations, including Pb (II) and U (VI). Montmorillonite clays are minerals with great specific surface and optimal properties for metal adsorption. They are also able to complex kinds of organic and polymeric compounds on its surface [12]. The clay minerals montmorillonite have been tested extensively as adsorbents in the removal of toxic heavy metals from aqueous solutions a few years ago. The works which focused on how the clays and their modified forms (following acid activation, intercalation and pillaring) have been used as adsorbents to remove heavy metals from water and how the experimental conditions like pH, temperature, adsorbent amount and adsorbate concentration influenced the adsorption capacities have been investigated.

Biological methods are inexpensive and effective for treating metal wastewaters and in situ bioremediation of metal (loid) contamination, little progress has been made towards metal (loid) recovery [13]. Microbes such as bacteria, fungi and algae are widely used as metal adsorbents. And its quantity can be as high as 1012/g soil [14]. Bacteria are ubiquitous in natural soil. Bacteria are able to sequester trace elements in their cell and to release them again [15]. As we known, microorganisms are often intimately intermixed with mineral phases to form complex, highly hydrated, high surface-area composite materials through attractive van der Waals interactions, hydrogen bonding, or ion bridging.

Montmorillonite clays and bacteria have noticeable metal sorption capacity. Clays or bacteria are difficult to separate from the solution when used as sorbent materials [16]. Graeme F. Morley showed that mixtures of montmorillonite and fungal biomass have reduced uptake of metals [17]. Nagina Parmar showed that non-viable S.alga cells and cell envelopes can sorb significantly greater quantities of Sr2+ [18]. Chen studied the abilities of the living and nonliving P. putida CZ1 cells, clays and their composites to accumulate Copper and Zinc from a liquid medium. Their results showed that bacteria play an important role in regulating the mobility of heavy metals in the soil environment [19]. Although most studies have examined metal binding by using isolated, singlecomponent systems, such as purified clays or bacterial walls and provide information on basic mechanisms of metal sorption, it does not apply directly to metal behavior in soils, which are significantly more complex. Much work is devoted to heavy metal sorption and relevant mechanisms by biology and minerals [20-24], but fewer studies focused on the removal of strontium by the interaction between bacteria and mineral through contact/non-contact system, which was the representative acted place of strontium in soil.

Pseudomonas fluorescens (Gram-negative), isolated from a lawn soil in the Sichuan Basin, China, was identified by its morphology and 16S rRNA gene sequence (GenBank accession number: HM468063). This strain is a normal soil inhabitant, especially found in meadow soil. The size of bacterial cell is 0.7-0.8 μm × 2.3-2.8 μm. Before inoculation, the culture was maintained on agar slants and stored at 4°C. The sugary culture medium was composed of (per L) 6 g of glucose (GLU), 3 g of beef extract, 10 g of peptone, and 5 g of NaCl. The pH of the culture solution was adjusted to 7.0-7.2 with hydrochloric acid or sodium hydroxide. Under the above conditions, P. fluorescens was incubated at 35°C during 24 h stationary culture.

The experiment was conducted in 50 mL Erlenmeyer flasks containing 20 mL of strontium sugary culture medium. Strontium concentration include 0, 10, 25, 50, 100, 250, 500, 1000, 5000 ppm. P. fluorescens in their stationary phase were injected into the flasks. The injected percentage was 1:99 ( v : v ). Then blending by shakers for 1 min. 0.2 mL blending solution was injected into the honeycomb plate of Bioscreen C. The test conditional of temperature and time were 35°C, 45 h. All samples were analyzed in triplicate. The experimental treatments with strontium (100, 1000 ppm) were cultured for 1 d, 5d to analyze the changes of its surface groups, respectively.

The experiments were conducted in 250 mL Erlenmeyer flasks containing 100 mL of strontium sugary culture medium. Strontium concentration was 100 ppm. P. fluorescens in their stationary phase were injected into the flasks. The clay stock and actual soil stock solution were prepared in the sugary cultural medium at 1.6 g/L, and then P. fluorescens was inoculated (1:99, v : v). Non-contact system was prepared by dialysis bag ( MW: 8000-14000, diameter: 36 mm ). It was used to separate the microbial cells from the montmorillonite surface. Then it was incubated on an incubator shaker (35°C, 150 rpm/min). A sample of the suspension liquid (5 mL) was then taken and centrifuged (10000 rpm, 10 min, 4°C) to obtain concentrated samples for Autoscan Advantage ICP-AES.

The growth curves of the strains were monitored using Bioscreen C (Finland). The changes of surface groups were analyzed with a Fourier transform infrared (FTIR) spectrometer (American). The concentration of residual strontium in the biosorption medium was determined using Autoscan Advantage ICP-AES (America).

Concentrations of Sr2+ after the removal treatment were determined by Autoscan Advantage ICP-AES. Metal removal rate (n) was determined as follows:

All samples were analyzed in triplicate. Relative standard deviations (RSDs) of less than 5% were obtained for replicate samples. Figure 1: Growth curve of P.fluorescens with different concentrations of Sr2+.

Figure 2: FTIR of P.fluorescens with different concentrations of Sr2+. 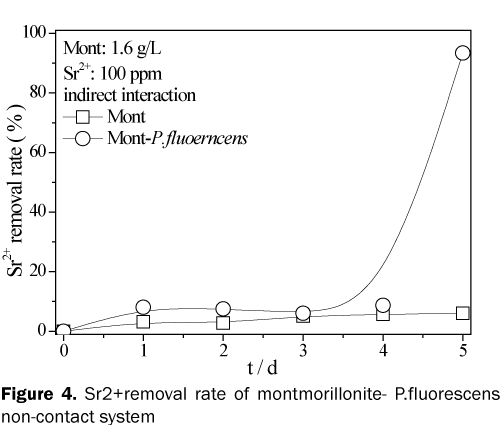 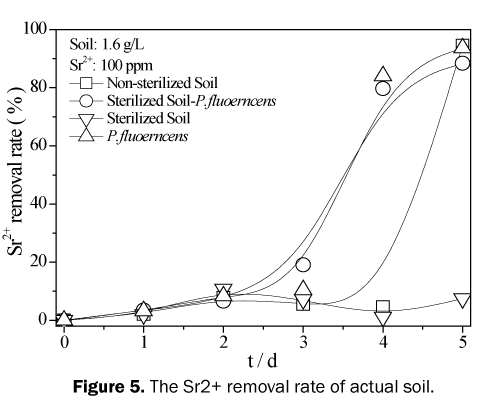 Analysis of Sr2+ removal by the components of system 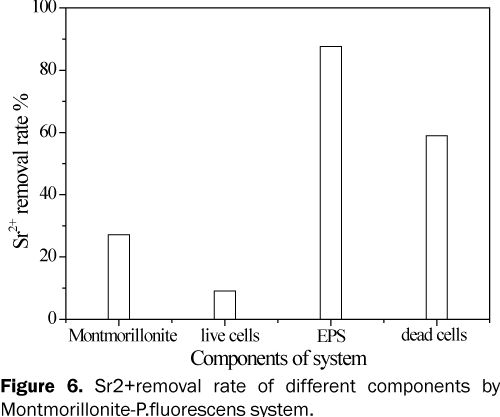 There are some limitations in this research. We investigated strontium removal capability in liquid by montmorillonite-P.fluorescens contact/ non-contact system. We also assessed strontium removal capability by actual soil at the same experimental conditions. We clarified that strontium removal by the components of system was in decreasing order and EPS played a major role in this system. However, this paper did not clarify the mechanisms of strontium removal by montmorillonite-P.fluorescens system, and did not indicate the main components and surface functional groups of P.fluorescens which could have highly binding capacities with strontium. Therefore, this research needed to be further studied. The paper was based on the characteristics of migrate slowly and high hazard of heavy metal in the soil, it would provide a new sight for the in-situ remediation of heavy metals and basic data.

The interaction between montmorillonite and bacteria are ubiquitous in environments, because all of them are widespread in soils. They may have profound impacts on the environment process of transporting of heavy metals or radionuclide ions. The present study concludes the effectiveness of using montmorillonite-bacteria system to remove strontium from the liquid culture. Strontium (under 1000 ppm) did not have effect on the metabolism of the P.fluorescens, according to the results of the growth curve and the FTIR. The removal rate of strontium reached 93.62%, 93.38%, respectively, in the montmorillonite P.fluorescens contact/non-contact system. And the removing process could be divided into slowly removing phase (0-80 h) and rapidly removing phase (80-120 h). The relative strontium removal capacities of the strontium removal by actual soil, in decreasing order, were actual soil > P.fluorescens > sterilized soil – P.fluorescens system > sterilized soil. The results of strontium removal by the components of system showed that EPS and dead cells play the major role in removing strontium in the montmorillonite-P. fluorescens system. These results suggest that bacteria play an important role in regulating the mobility of heavy metals in the soil environment.

This work is supported by the National Natural Science Foundation of China (No. 41130746 and 41102212) and the postgraduate innovation fund project by Southwest University of Science and Technology (No. 14ycxjj0033). Also we are grateful for the help of Analytical and Testing Center of Southwest University of Science and Technology.