Bacteriocin producing Staphylococcus aureus strain was isolated from skin swabs of healthy and infectious patients. Cell Free Supernatant (CFS) of culture was harvested for further investigation. It was then purified and analyzed for its affectivity against pathogenic microorganisms. The bacteriocin was produced by using a standard adsorption-desorption method and purified by high performance liquid chromatography. The antimicrobial activity of produced bacteriocin was detected against different strains. The produced bacteriocin is found to be significantly effective against food borne pathogens. The study concluded the possibility of using bacteriocin for food preservation as well as an extension of food life.

Bacteriocins are bacterial peptides or proteins which are synthesized by ribosomes and exhibit antimicrobial activity against other microorganisms or closely related species [1]. These antimicrobial peptides are abundant, have large diversity, and display variable biochemical properties, different molecular weights, amino acid sequence, and mechanism of action [2]. Nutrients available in the environment trigger bacteriocin production by microorganisms due to competition of space and nutrition. Both gram positive, as well as gram negative bacteria, can produce bacteriocin.

Upon consideration of the characteristic property of bacteriocins, these antimicrobial peptides are observed to be efficacious therapeutic agents for capping the growth of microbial pathogens, including resistant pathogens as well [3]. As per mechanism of action concerns, the bacteriocins display the effect on gene expression, protein production as well as on the cell wall of microorganisms. Some of these peptides are found to be effective due to their enzymatic actions. Bacteriocins lead to the formation of channels in the cell membrane of target bacteria, further causes low-molecular-weight ions to release from the cell, leading to the collapse of the proton motive force.

Bacteriocins are observed to be an effective solution for the reduction of resistance development. However, these are observed with high potential against clinically relevant pathogens [4]. Bacteriocins can be easily bioengineered as compare to antibiotics these can be manipulated to bind with anywhere on the outer cell membrane as they do not exhibit particular receptors. Ultimately, these bioengineer techniques lead to develop new ways in the research that help in the production of the latest therapeutic strategies with highly significant applications. Apart from it, it is highly recommended for the improvement of food quality either by incorporation in the food as a proportion of it or by adding as the culture in the fermented food [5]. These peptides have been extensively used in dairy products, meat products, fruits, and vegetables. In the current study, the antimicrobial activity of the bacteriocin produced by S. aureus against some food-borne and clinical pathogens was examined. Additionally, the minimum inhibitory concentration of bacteriocin was also reported.

Isolation and identification of Staphylococcus aureus

For the production of bacteriocin, a 24 hour overnight culture of S. aureus was taken and centrifuged at 10,000 rpm for 10 mins at 4°C. The supernatant was collected and used as crude bacteriocin.

The antimicrobial activity of bacteriocin was detected by spot-on-lawn method as well as the agar well diffusion method. For the analysis, Mueller Hinton Agar (MHA) plates were prepared and inoculated with an indicator strain of E-Coli. Afterward, culture supernatant (20 μl) was added to the wells in the MHA plates and then plates were incubated for 24 hours at 37°C [6]. Examination of zones of inhibition around the wells was performed after completion of incubation and the antimicrobial activity was expressed in millimeters (mm) for the demonstration of antimicrobial activity of bacteriocin the strain Escherichia coli ATCC® 8739™ was procured from American Type Culture Collection.

HPLC plays a vital role in the separation and quantification of various components of liquid samples. For the purification of bacteriocin, acetonitrile was used as mobile phase used were acetonitrile and 0.1% Trifluoroacetic Acid (TFA) in HPLC grade water [7]. The C-18 column was used for sample loading and separation was done by a linear biphasic gradient of 20% to 80% acetonitrile over 30 mins at a flow rate of 0.5 ml per min.

Production by adsorption and desorption

pH dependent adsorption and desorption method was used for the production of bacteriocin. The process focuses on the adsorption of bacteriocin on the producer cell at neural pH and their release a low pH [8]. Initially, the Culture of Staphylococcus aureus was inoculated in Brain Heart Infusion Broth (BHIB) at 37°C and incubated for 48 hr. The culture broth obtained was then heated in a boiling water bath and then allowed to cool. Afterward, the pH of the culture broth was set to 6.5 and kept for stirring overnight. Extraction of cells was done by centrifugation at 9000 rpm for 20 min [9]. and 5 mM sodium phosphate buffer (pH 6.5) was used to wash the pellet twice and the pellet was re-suspended in 5% (v/v) phosphoric acid, 10 ml of 100 mM NaCl solution for the adjustment of pH 1.5. Then the suspension was stirred overnight and cells were harvested by centrifugation at 9000 rpm for 30 min and stored at -20°C.

The activity of bacteriocin was confirmed by a well-diffusion assay showing inhibition against different indicator strains. The Indicator strains used to check the bacteriocin activity were Escherichia coli ATCC® 8739™, Streptococcus pneumoniae ATCC® 49619™, Leuconostoc mesenteroidesATCC® 8293™, Klebsiella aerogenes ATCC® 13048™, Listeria monocytogenes ATCC® 19111™, Pseudomonas aeruginosa ATCC® 9027™, Enterococcus faecalis ATCC® 29212™, Bacillus cereus ATCC® 10876™, Salmonella entericaATCC® 14028™. Examination of plates was done to check the zone of Inhibition found around the wells after 24 hrs. The zone of inhibition produced by different strains was compared with each other to check the effect of bacteriocin.

Mueller Hinton Agar (MHA) media was prepared and autoclaved for sterilization. MHA plates were prepared by pouring the sterilized media into the plates ascetically. Indicator strains were inoculated by spread plate technique and plates were labeled properly [10]. With the help of puncture, wells were created into the plates. The crude bacteriocin was added to each well. The plates were incubated at 37°C for 24 hours [11]. After completion of incubation, a clear zone of inhibition was observed.

Out of total 55 collected samples, 29 plates were observed with different types of colonies on Nutrient agar, which further inoculated onto selective media Mannitol salt agar to obtained pure culture [12]. Mannitol was fermented in 17 plates which turn the red media into yellow and yellow golden coloured colonies were further picked for identification.

Cell-Free Supernatant (CFS) was extracted from the 48-hour old culture of isolated strains by centrifugation at 10, 000 rpm for 45 min at 4°C. Agar well diffusion method was used to check the antimicrobial activity of CFS against indicator strain E. Coli. and out of 17 cultures, 5 isolates showed a clear zone of inhibition ranging from 16 mm to 28mm against indicator strain [13]. Isolate 4 showed a significantly higher zone of inhibition (28 mm) followed by isolate 5 (22 mm) and isolate 1 (18 mm). Isolate 2 and isolate 3 showed a minimum zone of inhibition (16 mm) (Table 1 and Figure 1). 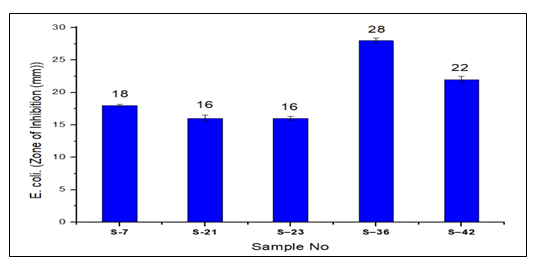 High Performance Liquid Chromatography (HPLC) was used to purify the bacteriocin and it gave a single peak at 5 min time interval of intensity at an absorbance of 280 nm (Figure 2). 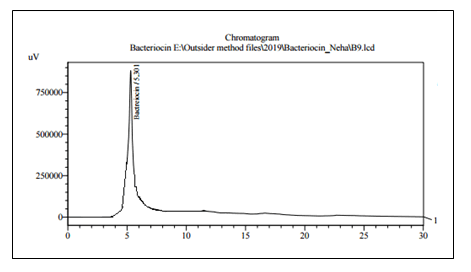 The minimum inhibitory concentration of purified bacteriocin was detected using the agar well diffusion method [14]. Different indicator strains were used and minimum effective concentration was found to as 20 μl (Table 3 and Figures 5, 6). 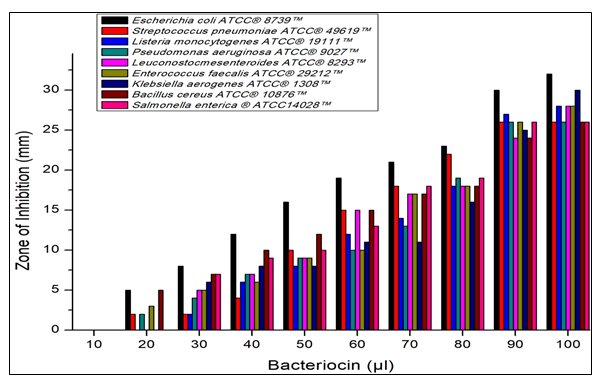 Figure 6:Minimum inhibitory concentration of bacteriocin indicated by the zone of inhibition.

Bacteriocin extracted from lactobacillus plantarum zrx03 is found to be effective against foodborne bacteria similar to our finding that bacteriocin is observed to be effective against pathogenic strains [15]. Another investigation revealed that the cell free supernatant from Lactic Acid Bacteria and Bifidobacterium showed antimicrobial activity by agar well diffusion method against different indicator strains due to bacteriocin like substance [16]. A study also revealed of Pediococcuspentosaceus LBM 18 produces an antibacterial and antifungal Bacteriocin-Like Inhibitory Substance (BLIS) that inhibited the growth of spoilage bacteria and potential to kill the harmful microorganisms at lower concentrations. The interpretation is exact to our study revealed the effectiveness of bacteriocin at minimum concentration.

Based on the presented results, it has been concluded that bacteriocin extracted from the Staphylococcus aureus exhibited a diverse spectrum of antimicrobial activity against pathogenic microorganisms. It shows significant effectivity at a lower concentration as well. It is also concluded from our study that bacteriocin produced by S. aureus was more effective against foodborne pathogens. Further research to study the properties, structure, and mode of action of such bacteriocins is required, especially for assessing their potential use in the biocontrol of bacterial diseases and as a substitute to antibiotics.

The author wants to express gratitude to Onisome Healthcare Pvt. Ltd. Mohali for assisting in the analysis of samples for HPLC. The author wants to thank IK Gujral Punjab Technical University, Jalandhar for providing me the opportunity of doing the research work.