Bio Responsive In Situ Gel of Clindamycin for Vaginal Application

The aim of present research is to investigate the effect of various bioresponsive polymers on drug release from Clindamycin gel formulating system developed for vaginal application. Bacterial infections are the major cause of cervical cancers. To achieve a better therapeutic efficacy and patient compliance in the treatment for vaginal diseases and infections. The problems like multiple days of dosing, dripping, leakage and messiness, causing discomfort to users were major attraction for research. Thus bioresponsive system has been formulated in a gel using the thermo sensitive, pH responsive and ion activated polymer together with alternative mucoadhesive polymers to enhance the effect for longer duration which in result decrease the dosing frequency. The present study will show the various effect of polymeric concentration on formulation and its release behavior. The developed formulation was characterized for various in-vitro parameters e.g. pH, viscosity, drug release profile, bioadhesive force, spreadability and stability studies. To simulate vaginal conditions, simulated vaginal fluid was used as diffusion media to observe release. The developed formulation is alternative to conventional vaginal dosage forms.

Bacterial vaginosis (BV) is the most common cause of vaginitis, accounting for 50% of cases. Bacterial vaginosis is caused by a change or imbalance in the types of the bacteria normally found in the vagina and causes an overgrowth of organisms. Vaginal preparations, although generally perceived as safer most, still they are associated with a number of problems, including multiple days of dosing, dripping, leakage and messiness, causing discomfort to users and expulsion due to the self-cleansing action of the vaginal tract [1,2]. These limitations lead to poor patient compliance and failure of the desired therapeutic effects. For effective vaginal delivery of antimicrobial agents, the drug delivery system should reside at the site of infection for a prolonged period of time. The vagina, unlike other systems is highly dynamic with respect to absorption of drugs, their metabolism and their elimination [3]. The vaginal defense i.e. epithelium, flora, immune cells and pH make it favorable site for local and systemic delivery of drugs that are used specifically for the treatment of female-related conditions [16]. The conventional dosage forms i.e preformed gel and solutions have a number of lacunas, which has limited their use in vaginal drug delivery. Direct application of gels onto the infected sites of the vagina might be difficult, inconvenient as well as have frequent dosing because the conventional gels do not remain for long time at the site of application. A new and recent approach is to try to combine advantages of both gels and solution so that an accurate dose can be administered with ease of administration i.e. in-situ gel system. These formulations remain to a solution state before administration but however transforms to gel after administration in to vaginal cavity [4].

The numbers of polymer those are liquid at room temperature become solid at body temperature. Poloxamer is a typical polymer in this regards. In addition to temperature there are other environmental triggers of gelation, such as calcium and pH. Such phase change polymer which solidify in the vaginal cavity, might indeed have a long contact time but will probably interfere with sexual intercourse. However there is polymer or polymer blends that soften but do not become solid. The great advantage of these polymers is that they can be inserted as liquid, suspension, gel. Moreover although the polymer do prolong contact time and have some ability to modulate drug release from gels, water – soluble drugs particular, release from such system quickly [1]. The in situ gel forming polymeric formulations offer several advantages like sustained and prolonged action in comparison to conventional drug delivery systems. From a manufacturing point of view, the production of such devices is less complex and thus lowers the investment and manufacturing cost [12].

Preparation of placebo gel system- Different concentration of Gellan gum, Chitosan, Carrageenan, Poloxamer were prepared and evaluated n their gelling capacity in order to identify the compositions suitable for use in the in-situ gelling system all preparation where prepared in the phosphate buffer saline solutions pH 5.0 the gelling capacity was determine by placing the drop of formulation in the vial containing 2 ml of freshly prepared SVF, noting the time for gel formation and dissolve.

• The weighed quantity of drug dissolves in saline phosphate buffer in aseptic condition.

• Preservative was added in the above step.

• Mix the drug and polymeric solution properly and add calculated amount of the osmotic agent to it.

The developed formulation was evaluated for various physicochemical properties.

pH evaluation: The pH of the formulation recorded with the glass microelectrode and allowing it to equilibrate for 1 min. Experiment where perform in triplicate and average where calculated.

Bio - adhesion Measurements: The method is based on the measurements of the tensile strength or shear stress required to break the adhesive bond between the model membrane and the test formulation. The test formulation is sandwiched between two model membrane and fixed on the flexible support in the assemblies for 10 sec. after adhesive bond is form the force required to separate the bond was measured and calculated as bioadhesive force.

Stability: Stability studies were carried out on optimized formulation as per ICH guidelines.

Clindamycin HCl was scanned for its absorbance at 213nm for generation of standard graph. The IR absorption spectra of the pure drug and drug-excipient mixture were taken in the range of 400 – 4600 cm-1 using KBR disc method. 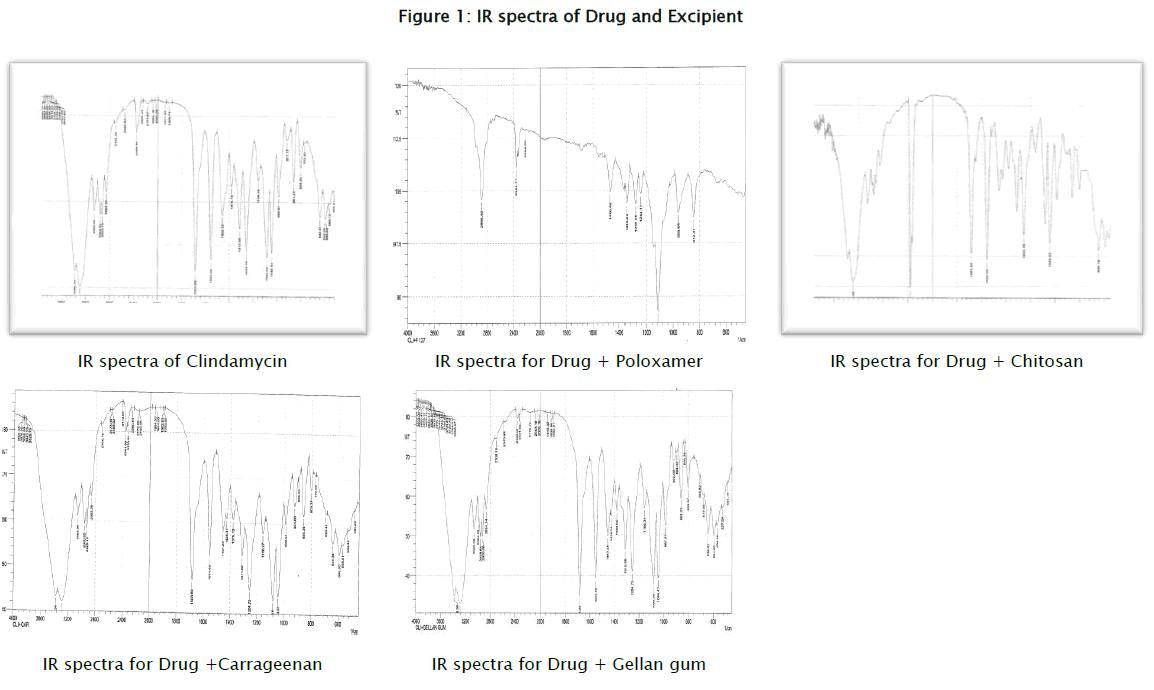 The physicochemical properties of the prepared formulation are shown in below table. The drug content uniformity, Gelation temperature, appearance, spread ability, GPC and pH of the formulation were found to be satisfactory and the formulation was liquid at non-physiological condition. The formulation prepared found to be free flowing liquid, which helps in easy instillation in site of action. It is desirable to maintain acidic environment in the vaginal cavity to mimic normal physiological condition in the healthy premenopausal women. Addition of a typical acidic buffer will probably have only a transitory effect on resident pH, whereas employing a bioadhesive polymer with an acidic pKa builds the acidifying component into the polymer, sustained the pH. A number of existing polymers most notably the carbopols, which are polacrylic acid based have useful pK as (i.e. in range of 4-5 range) [1,11] Shows comparative observation of physical and chemical evaluation of formulation +++ = Free Flowing Liquid; ++ = Viscous Liquid; + = Thick Liquid

The spreadability plays an important role in patient compliance and helps in uniform application of gel to the skin. A good gel takes less time to spread and will have high spreadability [6]. The spreadability of formulated gels was decreased as the concentration of polymer increased. [15]. Viscosity measurements where performed by the Brookfield Model DVIII+ Digital Viscometer. All the formulation evaluated for Viscosity measurement was appropriate for insitu gelling system. Gels presented non-Newtonian, pseudoplastic, thixotropic behavior, with yield stress. Overall viscosities varied between 13500 Pas and approximately 80 Pas within a biologically relevant shear rate interval [4,5]. 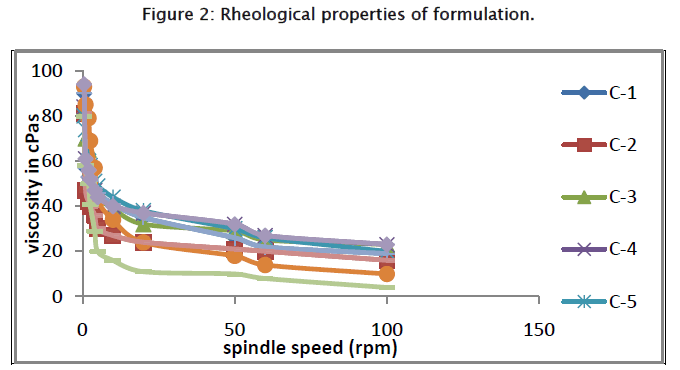 At this viscosity a dose volume of about 3.0 gms was found suitable for the premenopausal women, and a dose of about 2.2gm was suitable for the postmenopausal subjects to avoid leakage. It is important to recognize that we are relying on bioadhesion, rather than viscosity, as the retentive mechanism. Viscosity should therefore be viewed more from the point of view of case of application and dose volume required1. In vitro drug release behavior: In vitro drug release study was carried out in KC-Diffusion cell using SVF as diffusion medium. The processed cellophane membrane was used, simulating the vaginal in vivo condition like vaginal epithelial barrier. The drug content in withdrawn sample was estimated by UV-Visible spectrophotometer at 213 nm. The rate of drug release was dependent upon the polymeric concentration used in the development of formulation. The drug release from the formulation was prolonged for 9hrs and release behavior was observed same. 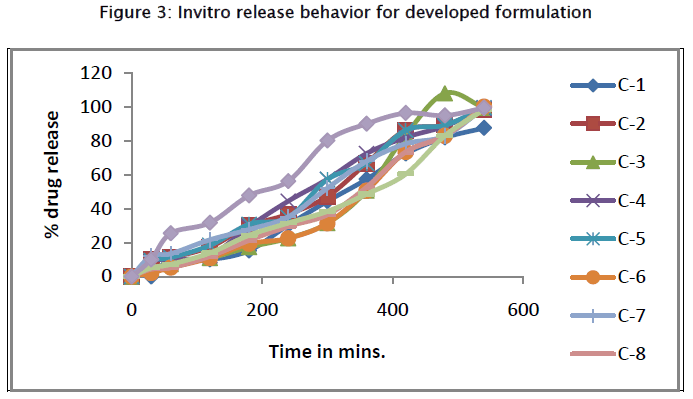 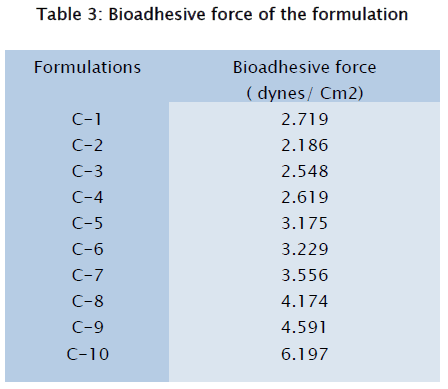 Table 3: Bioadhesive force of the formulation

Conditions: Based on visual identification the in situ gel has remained as liquid for a long period of 03 months without the occurrence of turbidity or gelation at 250c /65% RH. Sample were also kept at 30°C/ 65% RH, 2-8°C. Physical Evaluation of the formulation:

Comparative Viscosity profile of the formulations 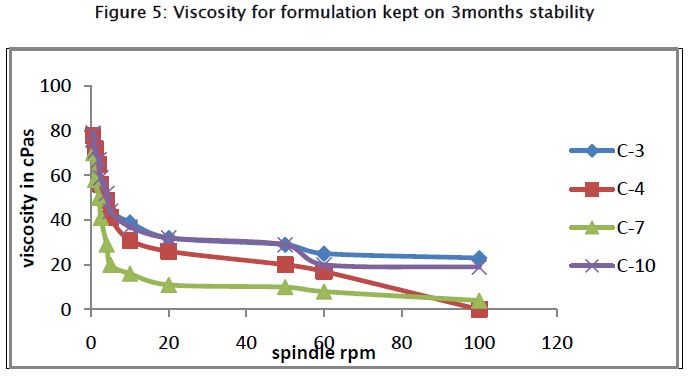 Physical evaluation of the formulation:

The vaginal route has been traditionally used for the conventional delivery of several locally acting drugs like antimicrobial agents [7]. Bioadhesive polymer Carbopol presumed to provide better vaginal bioadhesion [8]. A low viscosity product may leak out of the vaginal cavity and too high viscous may interact with sexual intercourse. A gel in the range of 50,000-80,000 cps is deemed suitable for the both ease of administration and retention. From present investigation it can be concluded that Clindamycin gel formulating system can be successfully formulated by using combination of Carbopol, Poloxamer, Carrageenan and other polymers. Selection of polymer and content is the major key factor in deciding viscosity and release from gel. Therefore combination effect of polymers was evaluated for prolong release of drug from formulation.

I thank Mr. P. Yenkar whose encouragement, guidance enabled me to develop this subject.