Two kinds of new polysaccharides (A-WSCBP50I and A-WISCBP50I) were extracted with sodium hydroxide and isolated by gel filtration chromatography approach from the fruiting bodies of Cordyceps militaris. Both of them mainly contained α-type glycosidic linkages according to their own IR and 1H NMR spectra. Furthermore, A-WSCBP50I had a molecular weight of 8.17 kD and was primarily composed of glucose, mannose and arabinose with the content of 38.67%, 27.22% and 21.96%, respectively. The other polysaccharide A-WISCBP50I was mainly composed of glucose (69.06%) and mannose (27.80%). In addition, the crude polysaccharide A-WSCBP exhibited scavenging capacity against DPPH radical in vitro with the IC50 of 0.068 mg/mL. A-WISCBP could scavenge superoxide radical produced in NBT-riboflavin system in dose dependent in vitro with the IC50 of 1.608 mg/mL

Polysaccharides from Cordyceps militaris, a forceful candidate substituting for the famous Chinese herb Cordyceps senisis, possess many pharmacological activities [9-11]，including immunostimulatory [12-14], antioxidant [12,14,15] and anti-tumor activities [14]. Structures of some of the polysaccharides have been elucidated, but almost none of alkali extracted polysaccharides except few reports [16,17].

Extraction of Polysaccharides by Alkali

After polysaccharides were extracted from the fruiting bodies by hot water thoroughly, the residue was mixed with 0.7 mol/L sodium hydroxide (NaOH) at a ratio of 1:8 (W: V) to extract polysaccharide, extracting 0.5 h for three times. Then the combined extracts were neutralized to pH 6.7 with acetic acid and centrifuged (10000 rpm, 10 min). Next, the supernatant was collected as the alkali extracted water soluble polysaccharides (A-WSCBP), while the precipitate as the alkali extracted water insoluble polysaccharides (A-WISCBP) and dissolved with NaOH (0.5 mol/L) for later use. Both of them was precipitated again with 95% alcohol and successively defatted with acetone and diethyl ether for 30 min. A-WSCBP was deproteinized as described with Sevag method [18]. The precipitate of A-WISCBP was dissolved with NaOH, mixed with Sevag dose, stirred 1 h and centrifuged (11000 rpm, 20 min) to remove protein, repeating 3 times. The contents of protein and polysaccharides were analyzed using Bradford method and the phenol-sulfuric acid method [19].

Isolation, Purification and Purity Evaluation of the Polysaccharides

A-WSCBP50 was obtained from A-WSCBP by fractional precipitation with absolute ethanol to the final concentration of 50%. It was dissolved with adequate water, centrifuged (10000 rpm, 10 min), and the supernatant was purified by Sephadex G-100 gel filtration chromatography (2 cm × 60 cm column) with the flow rate of 0.4 mL/min. For the other polysaccharide A-WISCBP, the dialyzed polysaccharide solution was added absolute alcohol to concentration of 50%, precipitated at 4°C overnight and centrifuged (10000 rpm, 10 min) to obtain the precipitation, name as A-WISCBP50. A-WISCBP50 was dissolved with 0.5 mol/L NaOH and ejected into a Sephadex G-100 chromatography column (2 × 60 cm) balanced with 0.1 mol/L Na2HPO4 with flow rate of 0.5 mL/min.

Then, the homogeneity of A-WSCBP50I and A-WISCBP50I were determined using gel permeation chromatography (GPC) and ultraviolet spectrum scanned at 190-700 nm, respectively.

Physicochemical Properties of the Polysaccharides

The molecular weight of A-WSCBP50I was determined using GPC and the monosaccharide composition of A-WSCBP50I and A-WISCBP50I using GC-MS as described in previous report [18].

Their structural characteristics were analyzed by IR spectrum with KBr pellet method in the range of 4000−400 cm−1 and by 1H NMR spectrum with D2O as the solvent (some of 0.5 mol/L NaOH was added to improve solubility of A-WISCBP50I) according to the previous report [18].

DPPH scavenging assay was performed in 3.0 mL of DPPH ethanol system according to our previous report [18]. The calculation formula was expressed as:

Scavenging rate (%)=[(Ac-As)/Ac] × 100% (formula 1), in which Ac and As standing for the absorbance of the control and the sample, respectively.

The scavenging ability of A-WISCBP on superoxide radical was analyzed according to the reference [18], with 0.5 mol/L NaOH taking place of the PBS in the reactive system.

Table 1: Result of molecular weight of A-WSCBP50 I. 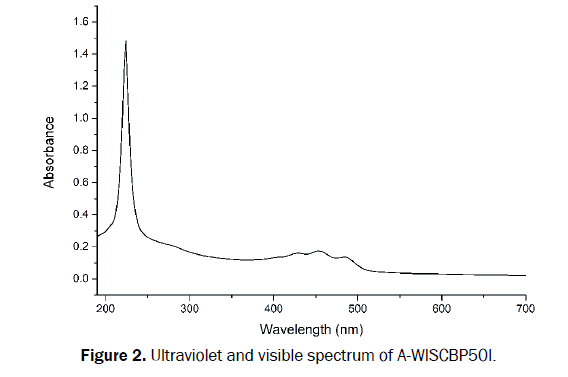 The IR spectra of A-WSCBP50 I and A-WISCBP50 I are shown in Figure 3 and both of them exhibit common characteristics of polysaccharides at 4000-400 cm-1. The absorption band centered at 842 cm-1 of A-WSCBP50 I was indicative of α- anomeric configuration [20]. A-WSCBP50 I had similar features to that of W-CBP50 II with some change of characteristic peaks intensity and peak position, possessing three more absorption peaks range from 1654-2888 cm-1 (Figure 3A). Nevertheless, A-WISCBP50I has obvious difference from that of water soluble polysaccharides (Figure 3B). The configuration of its compositive monosaccharide could not be estimated according to its IR spectrum, for there was neither absorption peak near 891 ± 7 cm-1 nor that near 844 ± 8 cm-1. Although A-WSCBP50I had some similar aspect to that of W-CBP50II we had reported previously, they were two kinds of different polysaccharide. First, A-WSCBP50I was mainly composed of glucose, mannose and arabinose, while W-CBP50II of glucose, mannose and galactose. Second, there were different signal region in their 1H NMR spectra. Furthermore, there was notably difference between them in there corresponding IR spectrum. The intensity of 2888 cm-1 of A-WSCBP50I was higher than that of W-CBP50II. Moreover, the intensity of fingerprint region of the former was higher than that of the latter, which meant that there was much difference in structure between them. Third, the scavenging ability of A-WSCBP50 I on DPPH free radical was significantly low than that of W-CBP50II.

In addition, A-WSCBP50I was also different from the polysaccharide CBP-1 which was extracted by alkaline from the cultured C. militaris at composition, molecular weight and glycosidic linkages [16]. As was mentioned above, A-WSCBP50I mainly contained Glc, Man and Ara with little Gal, Rib, Rha and Xyl, while CBP-1 was composed of Man, Gal and Glc. Meantime, CBP-1 contained both α and β glycosidic linkages for its 891 and 840 cm-1 absorption bands. A-WSCBP50I was different from CBP-1 because of its α conformation with peak at 842 cm-1 in IR spectrum. The reason may be that we used different methods in extraction, isolation and purification.

Antioxidant Activities of the Polysaccharides

A-WSCBP could scavenge DPPH in a concentration dependent manner with the IC50 of 0.068 (Figure 5A). A-WSCBP50I had far weaker scavenging ability on the same free radical, with the scavenging rate of 24.92% when its concentration of 0.254 mg/mL. The possible reason was that there was loss of some active components during the purification progress. Moreover, the antioxidant activity of A-WSCBP50I was far lower than that of W-CBP 50II. It probably because that sodium hydroxide solution used as the extraction solvent partly decomposed polysaccharides causing structure degradation and activity loss. Another evidence for the suggestion was that IC50 of CBP-1 (an alkaline extracting polysaccharide) and P70-1 (a water extracting polysaccharide) was 0.638 and 0.548 mg/mL, respectively. However, the antioxidant activity of A-WSCBP50I itself was not low which meant that it had potential potency for application.

The alkali extracting water soluble polysaccharide A-WSCBP50I was mainly composed of Glc, Man and Ara. The glycosidic linkage of A-WSCBP50 I was α-type according to IR and 1H NMR spectra and the molecular weight of its component was 8.17 kDa. Both A-WSCBP and A-WSCBP50I could scavenge DPPH free radical and A-WSCBP also could scavenge superoxide radical, which meant that they had antioxidant activities in vitro.