3 titration methods for quality evaluation of cefazolin sodium pharmaceutical product were developed and compared between them: acidimetric, iodometric and non-aqueous methods. The titrimetric methods consist of the measured volume of a solution, concentration of knowledge and need to completely react with a species to be quantified. A great advantage is measured without, in most analyzes, the analytical reference standard. Moreover, the smaller volume of solvent and high-end products. The developed methods meets the requirements of Brazilian Pharmacopeia and International Conference on Harmonisation, being fast, suitable, low cost, simple, accurate and can be used as an alternative for analysis of cefazolin sodium pharmaceutical product in laboratories and industry, contributing to improve the quality control of marketed drug.

Cefazolin sodium (CFZ), a β-lactam antimicrobial of the first generation, is commercially available as powder for injection solution. It has high antibacterial activity, demonstrates activity against some species of Enterobacter and can be administered less frequently because of its longer half-life [1-5].

Its efficacy as a therapeutic agent is well recognized, which makes it preferred among this group cephalosporins. Its mechanism of action stems from the inhibition of cell wall synthesis in Gram-positive and Gram-negative bacteria, similar to penicillin, since they have structural similarities [6-10]. 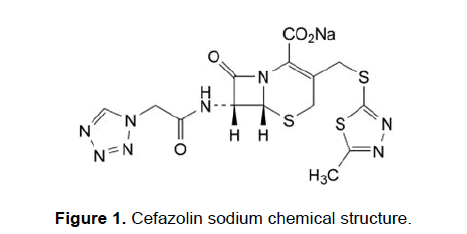 Some analytical methods in the literature for analysis of cephalosporins include spectrophotometry [20-36], high performance liquid chromatography [37-50], capillary electrophoresis [51], fluorimetry [52-56], polarography [57-61] and titrimetry [62].

CFZ is highly researched and researched in the area of antimicrobial activity, pharmacokinetics and pharmacodynamics. However, it has few studies about analytical methods. Thus, researches involving methods of analysis are very important and relevant to ensure the quality of the marketed product [48].

This paper aims to validate and evaluate the equivalence of three methods by titration for quantification of CFZ in pharmaceutical product.

The reagents used were analytical grade and it were prepared according to literature [19].

CFZ reference substance was a secondary standard with a declared purity of 98.2%, obtained from Sigma Aldrich® (St. Louis, USA). CFZ samples were packed in vials, each vial containing 1 g CFZ and they were kindly supplied by ABL Antibioticos do Brasil (São Paulo, Brasil).

k) Phenolphthalein 1% (w/w): 100 mg of phenolphthalein (MerckTM) was dissolved in 100 mL of alcohol. After this process, the solution was filtered.

l) Starch mucilage: 1 g of starch was mixed with 10 mg of red mercuric iodide and cold water to make a thin paste. 200 mL of boiling water was added with continuous stirring. After cooling, the clear solution was used.

20 flasks of CFZ were individually weighed to determine the average weight. After that, the powder was mixed. The quantity of CFZ was 21.156 g.

a) Acidimetric method: Amount equivalent to 500.0 mg of CFZ was dissolved in 25 ml of purified water free from carbon dioxide was added two drops of phenolphthalein indicator solution and neutralized with 0.1 M HCl. To the above solution, 25 ml of 0.1 M NaOH was added and it was heated on a water bath for 20 minutes at 80°C, taking precaution to avoid carbon dioxide absorption. It was cooled and the excess of 0.1 M NaOH was titrated with using 0.1 M HCl and phenolphthalein is used as an indicator solution. Repeated operation without the drug, as the difference between two titrations represents the amount of NaOH used, and 1 mol of 0.1 M NaOH corresponds to 47.65 mg of CFZ (measured as C14H13N8NaO4S3).

b) Non-aqueous method: Dissolved exactly an amount equivalent to 250.0 mg of CFZ sample in 30 mL of glacial acetic acid; 2 drops of indicator solution crystal violet is added and stirred till to complete dissolution and titrated with 0.1 M HClO4 solution and the same titration repeated without drug.

Three titrimetric methods, acidimetric, non-aqueous and iodometric, were developed according to precision and accuracy. The content percentage of CFZ was calculated using the equation proposed by AOAC [63].

b) Accuracy: This parameter was determined by the recovery study, comparing the theoretical and calculated concentrations of known amounts of CFZ reference added to the sample.

The percentage recovery (R%) was calculated according to AOAC [63], which is demonstrated by Equation 2.

CA=Concentration of the reference added to sample

For the acidimetric method, the equivalent to 1000 mg of CFZ reference was dissolved in 100 mL volumetric flask using water as the diluent to produce concentration solution of 10 mg/mL. Amounts of CFZ sample (equivalent to 500 mg of CFZ) were transferred to 250 mL flasks (R1, R2 and R3) and dissolved in 25 mL of carbon dioxide-free water (neutralized with 0.1 M hydrochloric acid). Portions of 2.5, 5.0 and 10.0 mL of CFZ reference (10.0 mg/mL) were added to flasks R1, R2 and R3, respectively. Aliquots of 25.0 mL of 0.1 M sodium hydroxide were added and heated on a water bath at 80°C for 20 minutes. After the solutions were cooled, 2 drops of phenolphthalein solution were added in each flask and the excess of sodium hydroxide was titrated with 0.1 M hydrochloric acid. A blank was performed and the difference between the titrations represented the volume of 0.1 M sodium hydroxide equivalent to CFZ present. This procedure was performed in triplicate. Each mL of 0.1 M sodium hydroxide is equivalent to 47.65 mg of CFZ (as anhydrous base).

For non-aqueous method, the equivalent to 1250.0 mg of CFZ reference was dissolved in glacial acetic acid to produce 100 mL (12.5 mg/mL). Amounts of CFZ sample (equivalent to 250.0 mg of CFZ) were transferred to 250 mL flasks (R1, R2 and R3) and dissolved with 30 mL of glacial acetic acid. Portions of 1, 2 and 4 mL of CFZ reference (12.5 mg/mL) were added to flasks R1, R2 and R3, respectively. After, 2 drops of crystal violet solution were added in each flask and the solutions were titrated with 0.1 N perchloric acid until the blue-green color. A blank was made. This procedure was performed in triplicate. Each mL of 0.1 N perchloric acid is equivalent to 47.65 mg of CFZ (as anhydrous base).

For iodometric method, recoveries were determined by adding known amounts of CFZ reference (0.5, 1.0 and 2.0 mg) to the samples. The equivalent of 500.0 mg CFZ reference was dissolved in water to produce 100 mL (5000 μg/mL). Amounts of 1, 2 and 4 mL of this solution were added to the sample, (i) aliquot of 10 mL, and transferred to a flask and added 5 mL of 1 M sodium hydroxide. After 20 minutes, 20 mL of acetate buffer solution, 5 mL of 1 M hydrochloric acid and 25 mL of 0.01 M iodine were added and the flask closed. After 20 minutes, protected from light, excess of iodine was titrated with 0.02 M sodium thiosul-phate, using starch mucilage, added towards the end of the titration, as indicator. (ii) In the other aliquot of 10 mL of CFZ (1000 μg/mL) was added 20 mL of the acetate buffer solution and 25 mL of 0.01 M iodine. After twenty minutes it was titrated with 0.02 M sodium thiosulphate using starch mucilage as indicator, added towards the end of the titration. The difference between titrations represents the volume of 0.01 M iodine equivalent to the CFZ present.

c) Method comparison: Results obtained in this study were compared between of them.

The methods used water as solvent. It is environmentally friendly, low cost and easy to handle.

Comparison of methodologies is important to verify equivalence between them, within a given range and whether the variability of procedures differ significantly. USP37 [19] recommends evaluating the accuracy and precision parameters to prove the equivalence of the methodologies.

Table 1 shows the experimental values obtained in the precision parameter for quantification of CFZ using acidimetric, iodometric and non-aqueous methods.

Table 1. Values of precision for the determination of CFZ by the three titration methods.

Figure 2 shows the relationship between the levels obtained in the assay CFZ lyophilized powder and their respective standard deviations over the six tests for the methods proposed in this work.

Results obtained in the acidimetric, iodometric and non-aqueous methods showed R.S.D. less than 2%, confirming the precision, according Table 1.

Figure 2: Relationship between the concentrations obtained in the assay CFZ lyophilized powder and their respective standard deviations over the six tests for the methods of acidimetry, iodometry and volume in a non-aqueous medium.

The mean recovery of acidimetric, iodometric and non-aqueous methods are shown in the Table 2.

Table 2. Values obtained in the recovery test for CFZ by acidimetric, iodometric and non-aqueous methods.

Pharmacopeias does not recommend acidimetric, iodometric and non-aqueous methods for cephalosporins analysis, in the case CFZ. But, the proposed methods showed be simple, low cost, fast, easy execution and they did not require of a sophisticated equipment, only glassworks.

The methods can be considered satisfactory because, in comparison, the RSD (%) values for accuracy are less than 5% and close to 100%.

Another way to prove the equivalence of the methods is to compare the dosing data using Fisher's F-Test and Student's t-Test for parametric data [64]. These data are shown in Table 3.

Table 3. Values of Test-F and t-Test for the determination of CFZ sample by acidimetry, iodometry and volumetry in non-aqueous medium.

The results obtained through the Student's t-test showed no statistical difference between the proposed methods, at a significance level of 5%. So, the methods can be considered equivalent and can be interchangeable for quantification of CFZ sample.

The acidimetric, iodometric and non-aqueous methods are effective and interchangeable for quantification analysis of CFZ powder for solution for injection.

They can also be considered simple to run, low cost, fast and environmentally friendly, making it a great choice for the routine use of laboratories and pharmaceutical industries.

To CNPq and CAPES (Brasília, Brazil) for the financial support granted.