Do We Need to Include the MJO Information in the Cyclone Intensity Prediction Models? Tropical cyclones are the deadliest and the most damaging natural disasters effecting through strong winds, heavy rainfall and storm surge, which in turn depends upon the winds and the local bathymetry. In addition to the efforts to improve the physics of the cyclone prediction models, it is worthwhile to investigate whether including any unexplored parameter can improve the cyclone prediction. Madden-Julian Oscillation referred to as MJO. It is one of such least explored phenomena that have an impact on the cyclone intensity. This short note investigates the impact of MJO on cyclone wind magnitude providing an opportunity for further exploring the possibility of incorporating into the dynamical models.

Tropical cyclones are the deadliest and the most damaging natural disasters affecting people, livestock, agriculture, and the economics of the coastal areas. Storm surge is another aspect of the havoc that is created by cyclones in particular in the low-lying and flat surface areas. The severity of the storm surge depends upon the cyclone intensity, direction of the storm approaching the coast beside the topography of the place. Thus, predicting the cyclone intensity along with its track with a minimum uncertainty is of great benefit to the disaster management authorities to plan the evacuation and mitigation processes.

Most of the Indian Ocean depressions or cyclones originate in the ocean and dissipate either in the ocean itself or cross the land and then dissipate. Some of them even cross the landmass and enter the other basin. The cyclone tracks in terms of the above categories are shown in Figure 1. Most of the cyclonic systems in the Indian Ocean form either from April to June with a peak in May or from September to December having a peak in November (Figure 2). 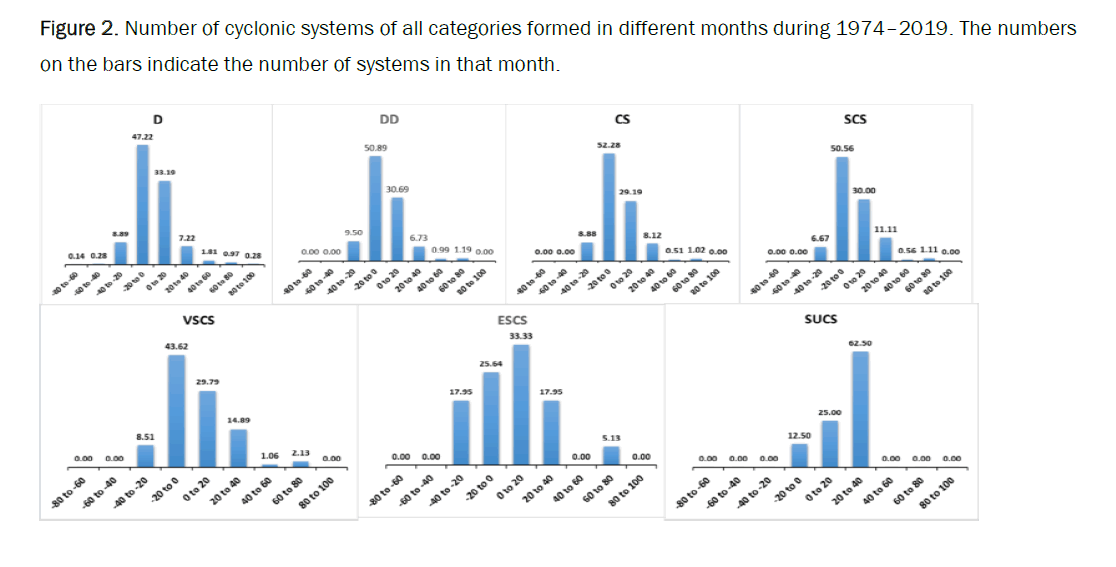 Figure 2: Number of cyclonic systems of all categories formed in different months during 1974–2019. The numbers on the bars indicate the number of systems in that month.

While sea surface temperature, ocean heat content, upper-level divergence, and many other atmospheric and oceanographic parameters and processes are known to influence cyclones, the Madden-Julian Oscillation referred to as M.J.O. is one of the least explored phenomena that have an impact on the cyclone intensity.

An M.J.O is the dominant sub-seasonal global tropical mode of variability in the tropics [1]. This has an area of relatively active convection that circles the globe Zhang et al. 2020 [2,3]. Thus, this phenomenon influences weather and climate variability on a global scale. In this context, Ali et al. 2021 explored the impact of M.J.O alone on cyclone intensity without considering the other factors [4]. They used an Artificial Neural Network approach for this analysis. This approach is one of the powerful data mining or machine learning tools for computing input-output relationships. It is an information processing paradigm that works somewhat similar to a biological system in the human brain.

Statistical analysis of their study revealed that M.J.O is another important phenomenon that needs to be considered for cyclone intensity predictions. The deviations between the wind speeds estimated using this approach and the actual observations fall between -20 knots and +20 knots for 80% of the cases and for most of the cyclone categories. In addition, they found that the influence of M.J.O on wind speed increases with increasing amplitude and has more impact on more intensity cyclones. They also observed that its impact is more when the activity is in the Indian Ocean and the two adjoining phases compared to the other four phases of M.J.O (Table 1).

This study is purely a statistical investigation. More detailed studies, particularly using dynamical models are required to come to a more physically-based conclusion and to answer whether incorporation of the M.J.O. information in the statistical and dynamical models will improve the cyclone predictability.