In this work, a strain, Brevibacillus agri DH-1, isolated from the soil of eastern coastal china was used to remove m-dichlorobenzene. Impact of Fe (III) on m-dichlorobenzene removal in a biotrickling filter is studied. After 48 h culturing, the optimal concentrations of Fe (III) is obtained according to microorganism growth and m-dichlorobenzene separation in a biotrickling filter. The predicted optimal concentration of Fe (III) is 4 mg/L. The fitting of Haldane-Andrews model for growth kinetics are still suitable in the optimum concentration of Fe (III), and the values of μmax, Ksi and KI were estimated at 0.07 h-1, 46.21 mg.L−1 and 155.49 mg.L−1, respectively. Degradation kinetic was also fitted well by the pseudo first-order, but the reduction of ln(c) becomes faster with incubation time due to the effect of Fe (III). In addition, the chloride ion concentration and C12O enzyme activity was measured, and it showed that Fe (III) could considerably improve the efficiency of antichloration and ring opening.

M-dichlorobenzene is an important raw material that is widely applied to the production of synthetic resin, and pesticides [1]. Many endocrine disorders, immune dysfunction and cancer appeared because of the direct emission of m-dichlorobenzene to our atmosphere [2]. Comparing biotrickling filter with other treatment method (physical methods and chemical methods), it is a good choice for m-dichlorobenzene treatment [3]. Moreover, the concentration of nutrients and pH in BTFs can easily be controlled by adding fresh medium, acids and bases [4,5].

Many researchers found that some metal ions have a promoting effect for the microbial activity. Among various options, Fe (III) has significant auxo-action as a basic element of microbial organisms and the appropriate Fe (III) concentration is one of important premises for microbial growth [10,11]. 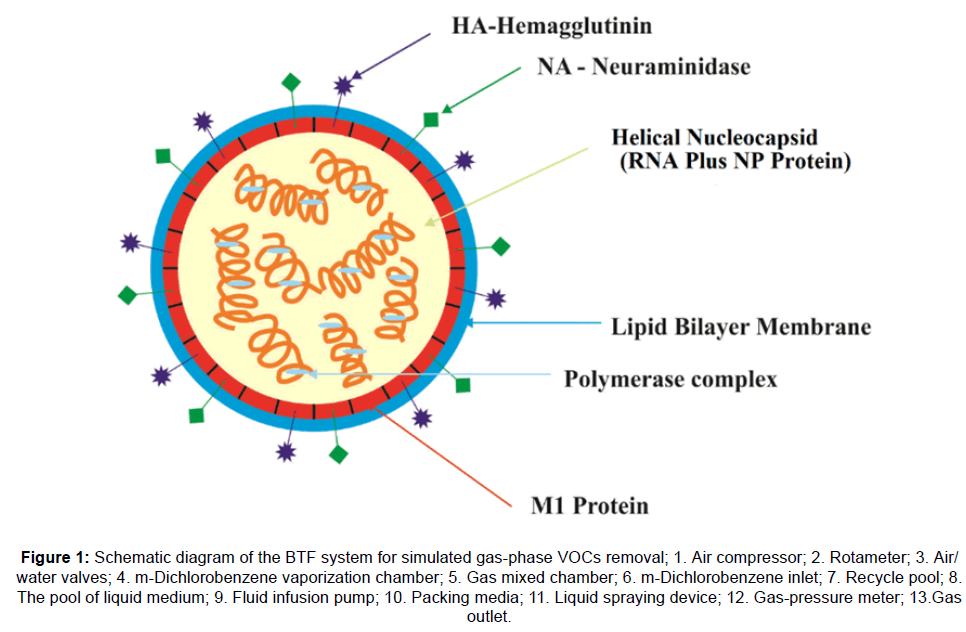 In this experiment, the optimal concentrations of Fe (III) were added in 50 mL of MSM, and then the 250 mL culture flask was sealed with silicone rubber septa. The different concentrations (26, 52, 78, 104, and 130 mg/L) of M-dichlorobenzene were added in the sterilized culture flask [14,15]. The microbial suspension was injected in the culture flask. Toxicity of the metal ion Fe (III) was represented using a spectrophotometer (6T, Beijing Purkinje General Instrument, China) to measure the OD values at a wavelength of 600 nm. The dry cell weight and m-dichlorobenzene concentration was analyzed after cultivation of the gradient of time. All the experiments were performed in duplicate.

Chloride ion concentrations and C12O enzyme activity were used to show effects of Fe (III) on degradation pathway. Fe (III) was added in culture flask, a sample was withdrawn after every 6 h to test Cl. A crude enzyme fluid was placed for 20 min from the logarithmic phase to detect the enzyme activity. The enzyme activity was computed as follows [16,17].

The optimizing experiments were carried out using a BTF. The BTF was successfully started up with an M-dichlorobenzene inlet concentration of 278.13–1098.75 mg/m3 at an empty bed residence time point (EBRT) of 60 s (It was showed in the previous work). In the steady-state stage, for seeking the optimal concentration of Fe (III) in biotricking filter and studying their effects under optimal concentration, various concentrations of Fe (III) was added to BTF. To ensure steady state of the bioreactor, BTF was resumed to the reference condition for about 5 d after each experimental condition [18].

In the experiments of growth of strain DH-1 and M-dichlorobenzene degradation, the growth of the strain was represented by measuring CDW. Herein, 50 mL of cell suspension was filtered and dried (24 h, 105°C) to weight for CDW. M-dichlorobenzene degradation was monitored using a gas chromatography (Clarus 580, PerkinElmer, USA) with an HP-VOC column (60 m × 0.32 mm × 1.8 μm) and a flame ionization detector (FID). Chromatographic conditions were described in HJ. CO2 production was detected by injecting 200 μL of gas-phase samples into a gas chromatograph (7890A, Agilent Technologies, USA) with an HP-Plot-Q column (30 m × 0.32 mm × 20 μm). The column and thermal conductivity detector (TCD) temperatures were 40°C and 200°C, respectively. The concentration of Cl- in the culture flask was determined by an ion chromatography (ICS-2000, Dionex) with an Ionpac AS19 (250 mm × 4 mm; Dionex) column after filtering through a syringe filter (0.22 μm, Bojin, Germany) as described previously [19].

The results of toxicity experiment are illustrated in Figure 2. It can be seen that the variation trends of microbial growth were similar. The absorbance quickly rose at the first 12 h then, its rising speed became slow until 24 h or 36 h. Finally, the absorbance was decline, and then leveled off. Positive effect on absorbance was observed for concentration range between 0.4~5 mg/L for Fe (III). Especially, at concentration of 4 mg/L and 5 mg/L Fe (III) showed a great enhancement for microorganism growth. 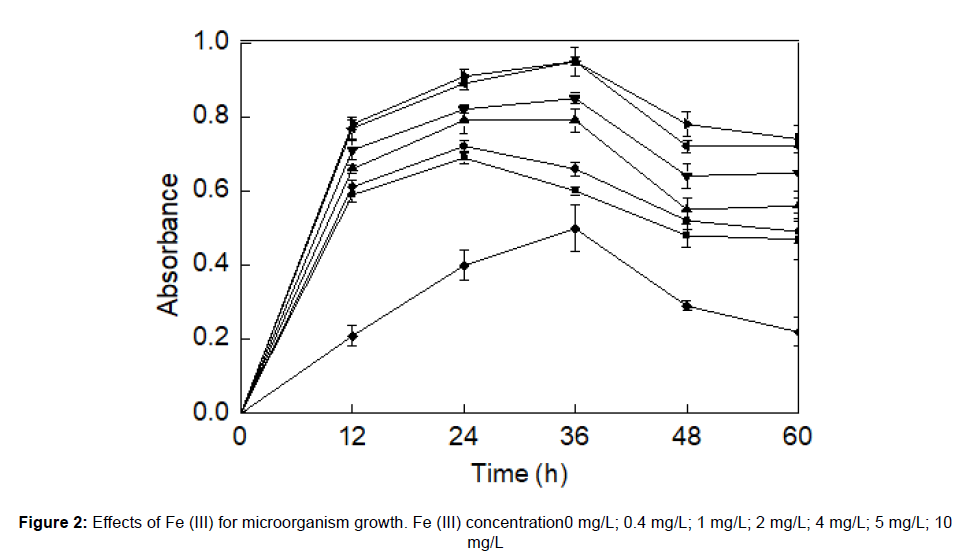 Many researchers are committed to dynamic simulation of experiments [20-22]. In this work, the result of growth of strain DH-1 and M-dichlorobenzene degradation at optimal Fe (III) concentration is shown in Figure 4. The M-dichlorobenzene loss and biomass endogenous decay rate was negligible (data not shown). 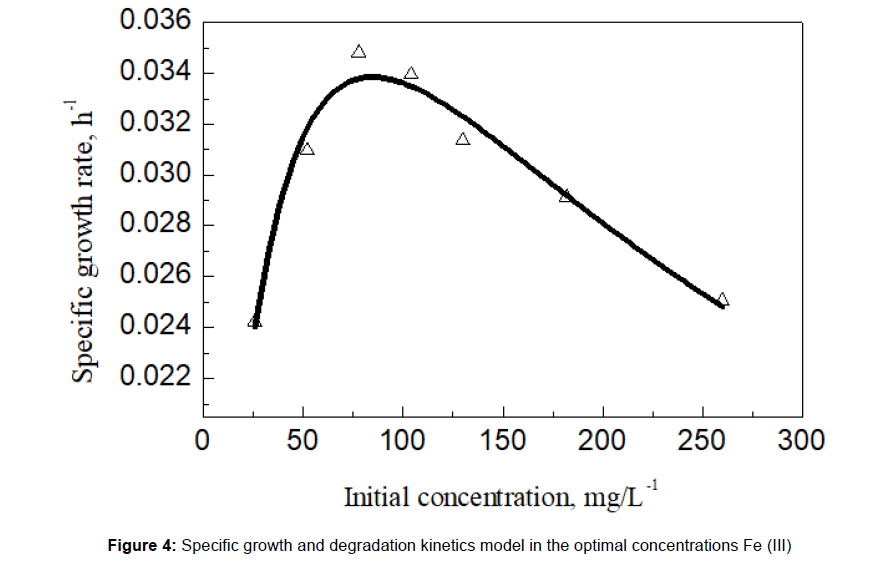 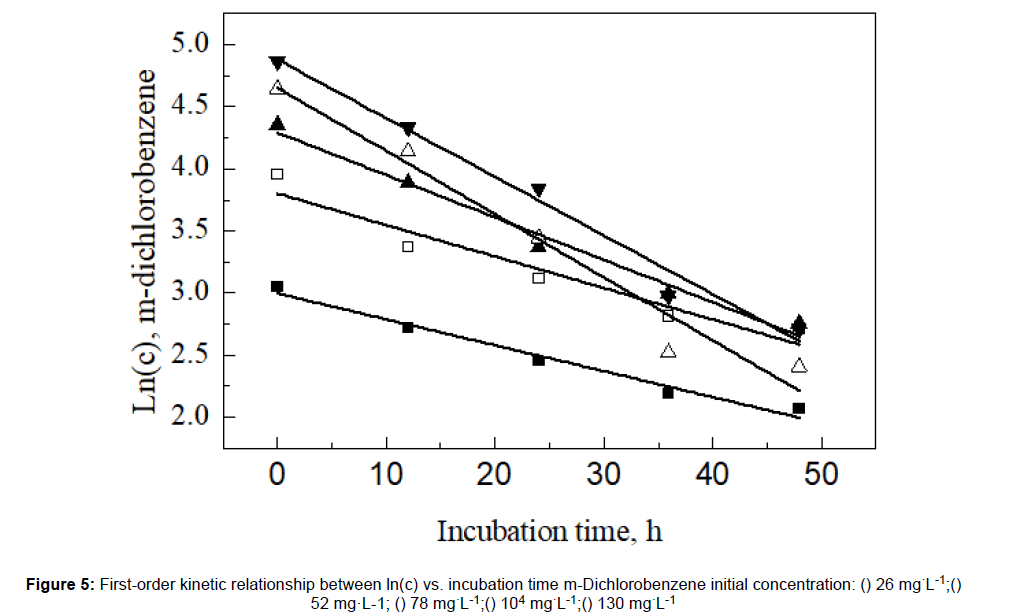 The variation of Chloride ion and C12O enzyme activity for m-dichlorobenzene degrading for 48 h was analyzed after the cultivation environment was added 4 mg/L Fe (III), and the result is described in Figure 6. From Figure 6, we can know that dechlorination was promoted significantly by the optimal concentration Fe (III). However, the highest chloride ion concentration is closed to the result of previous work indicating that Fe (III) just improved dechlorination and had little effect on breaking through the M-dichlorobenzene concentration restricting. As can be seen, the changes in C12O enzyme activity for the current study is higher than the previous work showing that the Fe (III) is helpful for accelerating ring opening of the m-dichlorobenzene degrading. 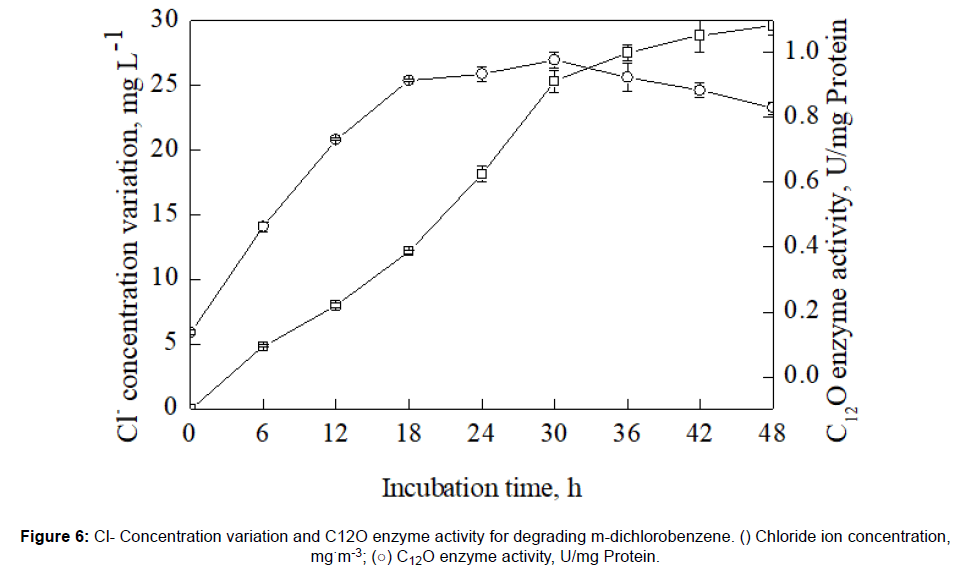 The optimal concentration of Fe (III) for m-dichlorobenzene removal by Brevibacillus agri DH-1 in a biotrickling filter is computed to be 4 mg/L. The kinetic analysis proved that Fe (III) can considerably promote the growth of strain DH-1 and m-dichlorobenzene degradation without changing the rule of growth and degradation. In addition, the optimal concentration of Fe (III) also has positive effects for dechlorination and ring opening of the degradation pathway.

This work was supported by National Key Research and Development Plan “Causes of Air Pollution and Control Technology Research” (2016YFC0209200) ，the National Natural Science Foundation of China (Grant No. 51778612) and Natural Science Fund for Colleges and Universities in Jiangsu Province (17KJA610005).