Formulation and Evaluation of Gastro Retentive Floating Tablets of Stavudine

The purpose of this research work was to develop gastroretentive drug delivery system of stavudine. Floating tablets were prepared by direct compression method using gas generating agents such as sodium bicarbonate and citric acid anhydrous, polymers like HPMC K4M, HPMC K15M and Xanthan gum. Formulations tried for different ratios of drug and polymers to get desired release profile. Prepared tablets (F1-F9) were evaluated in terms of precompression and postcompression parameters. Stavudine floating tablets were prepared by direct compression method were found to be good without chipping, capping and sticking. The drug content was uniform in all the tablet formulations indicating uniform distribution of drug within the matrices. All the prepared batches showed satisfactory floating lag time and total floating time found to be more than 24hrs. Among all formulations, F6 showed the drug release in most sustained manner and showed 98.434± 0.542 % of in vitro drug release at the end of 24 hrs and selected as the best formulation. The in vitro data obtained for the optimized formulation (F6) was fitted in different models viz. zero order, first order, Higuchi and Korsemeyer-Peppas equation for release kinetics and showed that the formulation follows Zero order release and the best fit model for the formulation was Korsemeyers-peppas model. Slope value (n) in Korsemeyer-Peppas equation for formulation was found as 0.7230 suggested that the release of stavudine from the formulation followed the non-Fickian transport mechanism. Further formulation F6 was subjected to accelerated stability studies for 3 months showed that formulation was intact without interaction. Finally optimized formulation F6 complying with all properties of floating tablets and found to be satisfactory.

Oral drug delivery systems have progressed from immediate release to site-specific delivery over a period of time. This is due to greater flexibility in dosage form design for the oral than for the parenteral route [1]. But various problems are also associated with the conventional oral dosage like tablet capsule etc., that it is often necessary to take this type of drug delivery systems several times a day to maintain the concentration of drug administered within the therapeutically effective range which results in a fluctuated drug level and consequently undesirable toxicity and poor efficiency. So to overcome such problems associated with conventional oral dosage form the concept of controlled drug delivery systems was introduced [2,3].

Control of placement of a drug delivery system in a specific region of the gastro intestinal tract (GIT) is required to overcome the problem. These considerations have lead to the development of a unique oral controlled release dosage form with gastro retentive properties, which would be retained in the stomach and release the drug in a controlled and prolonged manner, so that the drug could be supplied continuously to its absorption sites in the upper GIT [5].

Gastro retentive dosage form can remain in the gastric region for several hours and hence significantly prolong the GRT of drugs which improves bioavailability, reduces drug waste and improves solubility of drugs that are less soluble in a high pH environment. It is also suitable for local drug delivery to the stomach and proximal small intestine [1]. This kind of delivery system is suitable for drugs with an absorption window in the stomach or in the upper part of the small intestine.

Extensive efforts in both academia and industry towards the development of such drug delivery system were done leads to various approaches for the formation of gastro retentive dosage form as:

• Gastro retentive dosage form having high density than gastric fluid, that is retained in the bottom of the stomach [7]

• Slowed motility of the GIT by concomitant administration of drugs or pharmaceutical excipients [9,10]

Ultimate goal of drug product development was to design a system that maximize the therapeutic potential of drug substance and facilitates its access to the patient. Stavudine is typically administered orally as a capsule and an oral solution. The drug has a very short half-life (1.5 hrs) thus necessitating frequent administration to maintain constant therapeutic drug levels. Therefore our objective was to design and develop a gastro retentive floating dosage form containing an anti-retroviral drug like stavudine by reducing the density of the system in the stomach so that dosage form floats and retain for prolonged period of time and release the drug slowly at desired rate.

A funnel was kept vertically in stand at a specified height above a paper placed on horizontal surface. The bottom was closed and 10 gm of sample powder was filled in funnel. The funnel was opened to release the powder on paper to form a smooth conical heap. The height of heap was measured using the scale. A border of heap was marked circularly and its diameter was measured at four points [13]. The angle of repose was calculated using following formula;

Bulk density is a ratio of mass of powder to bulk volume. The bulk density depends on particle size distribution, shape and cohesiveness of particles. Accurately weighed quantity of powder was carefully poured in to graduated 100 mL measuring cylinder through large funnel and volume was measured, which is called initial bulk volume [13]. This is expressed in gm / mL and determined by the following formula;

Accurately weighed quantity of powder was carefully poured in to graduated 100 mL measuring cylinder through large funnel. The cylinder was then tapped 100 times from a constant height and the tapped volume was read [13]. This is expressed in gm / mL and determined by the following formula;

Carr’s index is an indication of the compressibility of a powder [14]. It is expressed in percentage and determined by the following formula;

A small index like percentage compressibility index has been defined by Hausner. Values less than <1.25 indicates good flow, where as greater than 1.25 indicates poor flow. Added glidant normally improves flow of the material under study [14]. Hausener’s ratio can be calculated by;

Hardness (diametric crushing strength) is a force required to break a tablet cross the diameter. The hardness of a tablet is an indication of its strength. The tablet should be stable to mechanical stress during handling and transportation. The degree of hardness varies with the different manufactures and with the different types of tablets. The hardness was tested by using Monsanto hardness tester [15]. The averages of 5 determinations were taken.

The tablets were placed in a 100 mL beaker containing 0.1N HCl solution. The time required for the tablet to rise to the surface and float was determined as floating lag time and duration of time, for which tablet constantly remain on surface of medium was recorded as total floating time [16].

The swelling of the polymers can be measured by their ability to absorb water and swell. Three tablets from each formulation were kept in a Petridis containing 0.1N HCl. After a selected time intervals the tablets were withdrawn blotted to remove excess of liquid and weighed. Swelling characteristics of the tablets is expressed in terms of water uptake (WU) which is calculated by using following equation [17].

Stability studies were performed as per the ICH guidelines. Selected formulations of stavudine were packed in aluminum pouch and subjected to accelerated stability at 40°C / 75% RH for a period of 3 months. Samples from each formulation which are kept for examination were withdrawn at definite time intervals. The withdrawn samples were tested for hardness, in vitro buoyancy and assayed for drug content and in vitro drug release [23].

Pre-compression parameters play an important role in improving the flow properties of pharmaceuticals especially in tablet formulation. These include bulk density, tapped density, Carr’s index, Hausner ratio and Angle of repose. Before formulation of floating tablets, the drug and ingredients were evaluated for all the above said parameters and it was found that all the observations were within the prescribed limits of IP. Precompression parameters of Stavudine floating tablet granules are shown in Table 2. The bulk density of the formulation ranged between 0.270 ± 0.003 g/mL and 0.363 ± 0.004 g/mL. Tapped density varied between 0.317 ± 0.005 g/mL and 0.415 ± 0.005g/mL. Carr’s index value ranged between 10.52 ± 1.166% to 12.19 ± 0.766%. Hausner ratio was found between 1.11 ± 0.019 and 1.17 ± 0.016 and Angle of repose has been used as indirect method of quantifying power flow ability, and fallen between 25.11 ± 0.571° to 33.23 ± 0.325°. All the formulations were fallen in good flow character based on angle of repose, compressibility index and Hausner ratio reports. 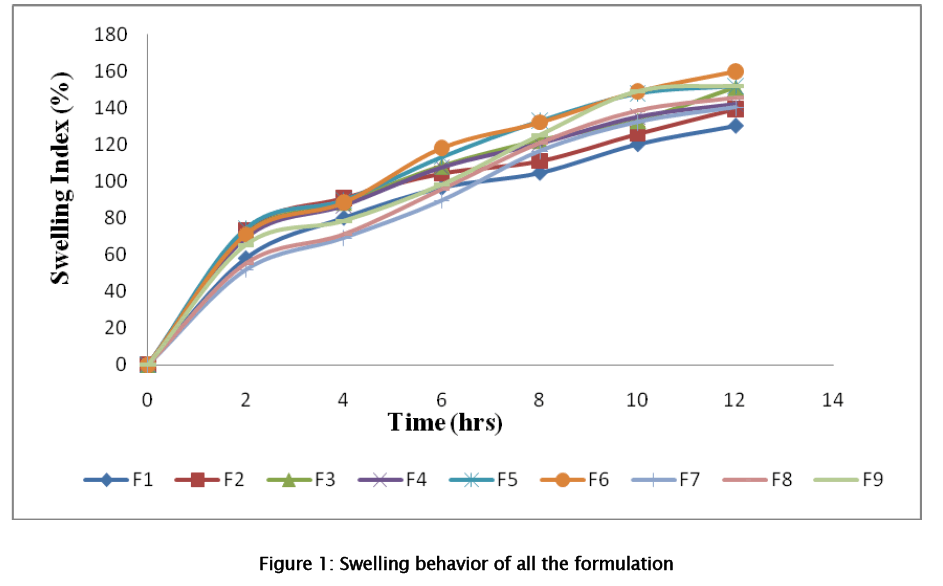 Figure 1: Swelling behavior of all the formulation 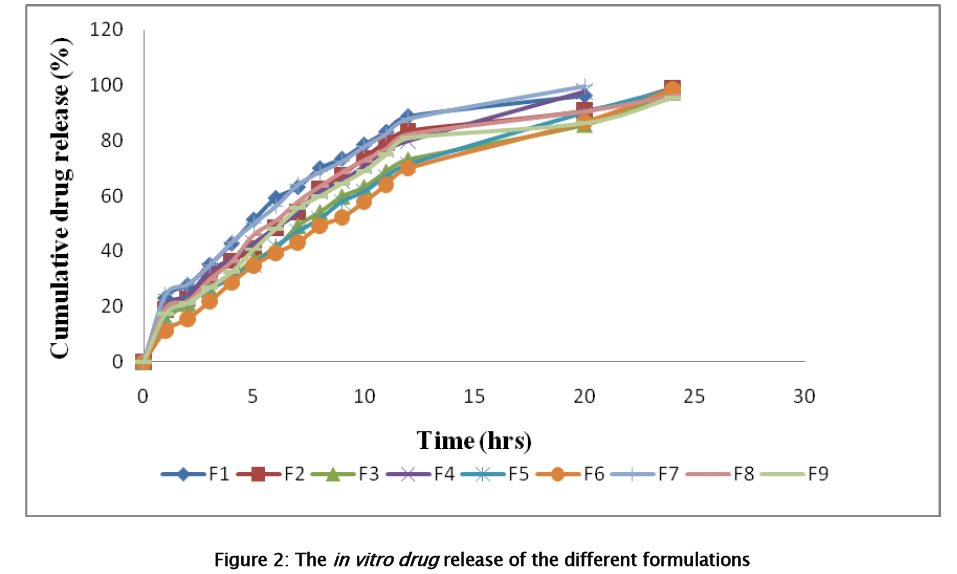 Figure 2: The in vitro drug release of the different formulations

Table 5: The r2, k and n value for optimized formulation(F6)

During and at the end of the accelerated stability, the tested tablets showed non-significantly different drug content from that observed at the beginning of the study. They also showed satisfactory hardness and buoyancy properties during and at the end of the accelerated study period. Accelerated stability of the selected formulation of stavudine floating tablets were carried at 40 ± 2oC / 75 ± 5% R.H for a period of 3 months and the samples were tested for hardness, in vitro buoyancy, drug content and in vitro drug release for every month and results were shown in Table 6.

From the above studies it is concluded that gastro retentive floating tablets of stavudine can be formulated using gas generating agents such as sodium bicarbonate and citric acid anhydrous, polymers like HPMC K4M, HPMC K15M and Xanthan gum. Varying in the ratios of polymers (HPMC K15M, HPMC K4M and Xanthan gum) with respect to drug in formulations affected the water uptake efficiency, in vitro buoyancy and in vitro drug release rate of formulations. As concentration of polymers was increased in formulations the water uptake efficiency and total floating time increased and also the drug released in more sustained way. The formulation having higher concentration of HPMC K15M showed the maximum water uptake efficiency and released drug in slow and much sustained manner than other formulations. In vitro studies and water uptake studies have shown that this is a potential drug delivery system for stavudine with a good stability and sustain release profile.