Objective: The aim of the study is the formulation and evaluation of Quercetin nanoparticles using low molecular weight chitosan by applying QbD approach.

Results: The average particle size of optimized Quercetin nanoparticles was found to be 97.5 nm with entrapment efficiency of 50% and zeta potential of +24.7 mv. The drug release profile showed that there was a burst release of 30.7% in first 5 hrs and 93% was released in 36 hrs. In release kinetic study the release profile had a best fit with Higuchi model with R2 value of 0.995.

Conclusion: The optimized Quercetin nanoparticles can be used as effective drug in the targeting of cancer due to its size and drug release characteristics.

Quercetin (3,3′,4′,5,7-pentahydroxyflavone) is the major representative of the flavonol subclass among flavanoids. It has been reported to have a variety of biological activities and pharmacological actions. They are most abundant flavonoid, found in variety of foods including apples, berries, Brassica vegetables, capers, grapes, onions, shallots, tea and tomatoes, as well as many seeds, nuts, flowers, barks and leaves. Quercetin itself has been shown to exhibit a chemo preventive role in several cancers including liver, lung, prostate cancers, breast and renal cancer [1-4].

Antiplatelet: A complicated process involving inhibition of the eicosanoid Pathway and reducing cyclicAMP.

Antihistamine: Inhibits the release of histamine and basophils from mast cells in lung and intestinal tissues [5,6]. 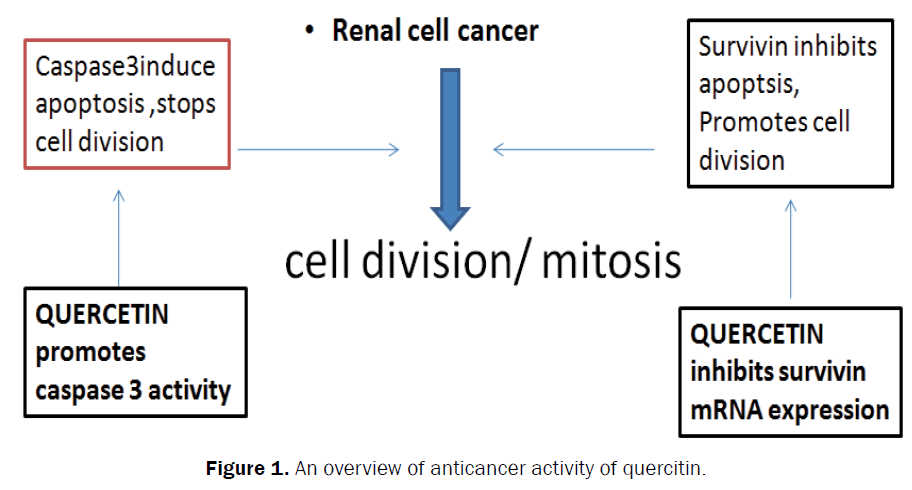 Figure 1: An overview of anticancer activity of quercitin.

Although quercetin has been studied as a potential candidate for cancer treatment it has certain limitations, like low aqueous solubility (<0.1 g/ml), poor absorption (<10%), high metabolic rate (<1 h) and low bioavailability. Hence, to overcome the restrictions, nanotechnology is being employed. The quercetin loaded polymeric nanoparticles will enhances its bioavailability, targeting and effective treatment in cancer.

The main purpose of the present research was to prepare the quercetin loaded polymeric nanoparticles using low molecular weight chitosan which was prepared from normal chitosan by enzymolysis, by applying quality by design approach and was evaluated. Low molecular weight chitosan had increased targeting efficiency and the nanoparticles of around 100 nm are considered to be effective in targeting of the cancer cells.

Chitosan (1.0% W/V) solution was prepared using 1%v/v acetic acid, which is having a pH of around 3.0. To the above solution, enzymes were added and incubated at 37°C for 3-5 hrs with constant stirring. After the hydrolysis, the enzyme was inactivated at 1000°C for 10 min and the pH was adjusted to 12 with 2 M NaOH to precipitate the products with a high degree of polymerization (DP). The suspension was centrifuged; the insoluble residue was washed with double distilled water and lyophilized to give LMWC (Table 1) [8].

Intrinsic viscosity [η] can be defined

By plotting viscosities as a function of concentration the intrinsic viscosity can be estimated by extrapolation of polymer solution to zero concentration.

The equation describing the dependence of the intrinsic viscosity of a polymer on its relative molecular mass (molecular weight) is:

Where [η] is the intrinsic viscosity, K and α are constants the values of which depend on the nature of the polymer and solvent as well as on temperature, and M is usually one of the relative molecular mass averages.

Quercetin nanoparticles were prepared by ionic gelation cross linking method. Quercetin was first made soluble in DMSO: Phosphate buffer saline (1:4 ratio) and between 80 was added adequately in order to bring out complete solubilisation i.e. clear liquid solution was obtained. Low molecular weight Chitosan in adequate amount was taken and made soluble in phosphate buffer saline pH 7.4 and acetic acid was added slowly in drops until it gets completely solubilised. Appropriate amount of quercetin and chitosan solution (1:2 ratio) was mixed and then required amount of 0.1% of sodium tripolyphosphate was added as a cross linking agent and the solution was stirred vigorously until the opalescence was observed. The final suspension was centrifuged at specified rpm and time. The supernatant obtained upon centrifugation was collected and measured. The ratio of Quercetin and low molecular weight chitosan was selected on the basis of the stability of quercetin with low molecular weight chitosan in phosphate buffer saline solution. It was found that 0.5 mg/ml of quercetin was stable (no precipitation) with low molecular weight solution (Figure 2) [10].

In this study 23 Factorial design (FD) with two center points was used for optimization (Figure 3). In this study independent variables were speed, time and cross linking agent to polymer ratio. The dependent variables were particle size and entrapment efficiency. Among the independent variables, speed, time and cross linking agent to polymer ratio (C: P) were identified as the most critical parameters which will affect the particle size and entrapment efficiency. In the responses, particle size is the most important for the cancer cell targeting and entrapment efficiency is the next important for being an effective formulation. So these independent variables and responses were selected for optimizing the formulation. (Table 2) summarizes an account of all the experimental runs and the actual values and levels of independent variables. All other formulation and processing variables were kept invariant throughout the study. The resulting data was fitted into Design Expert Software (Trial Version) and analyzed statistically using analysis of variance (ANOVA). The data was also subjected to response surface methodology to determine the influence of speed, time and cross linking agent to polymer ratio on responses.

Fourier transforms infrared spectrometer (FT-IR) analysis: FTIR spectroscopy analysis of optimized Quercetin nanoparticles formulation was done using the KBr disc technique in the range of 4000-400 cm-1. All the spectra was recorded at room temperature with a resolution of 4 cm-1 for 45 scans.

In-vitro release study: The quercetin release profile was investigated by using dialysis bag from HIMEDIA (membrane-50). In this study 5mg equivalent nanoparticles were taken and dispersed in 2ml phosphate buffer and 2 ml was inoculated in the dialysis membrane. Dialysis membrane containing QUER-CHIT nanoparticles was placed in a 200 ml medium at 37 °C under magnetic stirring. The medium was consisting of phosphate-buffered pH 7.4 containing 10% ethanol (v/v) because the limit of solubility of QUER in water makes it impossible to study in buffer. At selected times interval aliquot of sample were withdrawn and was replaced with fresh medium maintained at same temperature. Withdrawn samples medium was measured for absorbance at 370 nm by UV-Vis spectrophotometer. The absorbance was recorded and it was related to the amount of quercetin released using the standard curve. Results were expressed as cumulative percent of released as a function of time compared with standard QUER.

Kinetic study: For estimation of the kinetic and mechanism of drug release, the result of in vitro drug release study of nanoparticles were fitted with various kinetic equation like zero order (cumulative % release vs. time), first order (log % drug remaining vs. time), Higuchi‟s model (cumulative % drug release vs. square root of time). R2 and k values were calculated for the linear curve obtained by regression analysis of the above plots.

Identification of the Drug

The melting point of quercetin was found to be 316.5 The principal peaks of Quercetin were found identical to the standard depicting no harmful interaction as shown in the Figure 6. 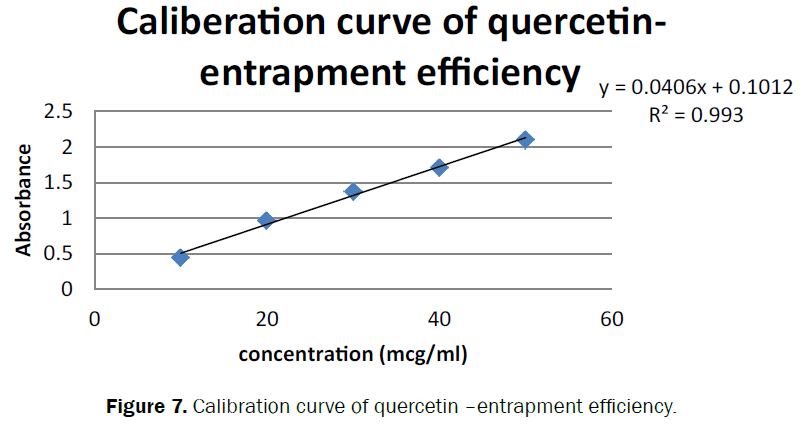 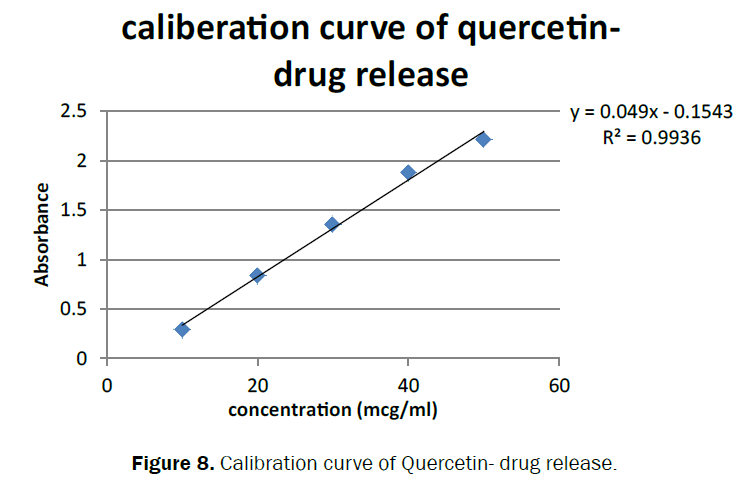 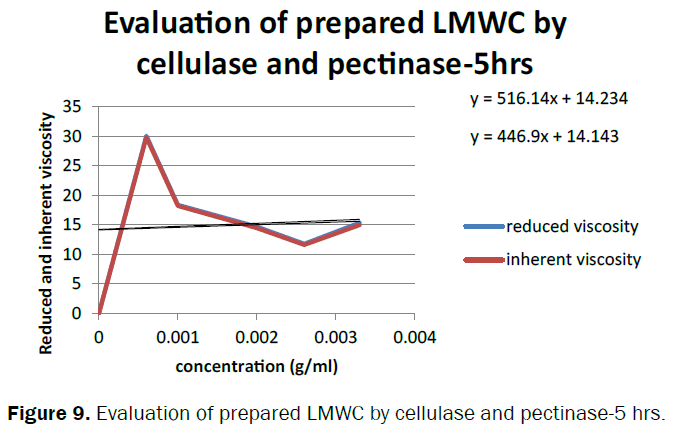 Figure 9. Evaluation of prepared LMWC by cellulase and pectinase-5 hrs.

Fourier transform infrared spectrometer (FT-IR) analysis: The FTIR spectra study of the prepared low molecular weight chitosan was carried out and compared with the initial chitosan. These results demonstrated that the structures of the main chain of the initial chitosan and LMWCs were the same. The NH2 amino groups had a characteristic peak near 3440 cm-1, which was overlapping by the peak due to the –OH group. The occurrence of absorption peaks at around 2900 cm-1 was assigned to the asymmetric stretching vibration of the –CH2 and the rapid reduction in the intensity for the LMWCs was probably attributed to degradation of chitosan after hydrolysis. A signiﬁcant peak around 1660 cm-1, which suggests that the –C=O groups had more opportunity to form stronger hydrogen bonds, and the scission of polymer chains led to the decrease of the chitosan molecular weight. The results indicated that there was no signiﬁcant difference between the main structures of the two samples before and after the enzymatic hydrolysis, but the molecular weight of the main hydrolysis products decreased (Figure 10). 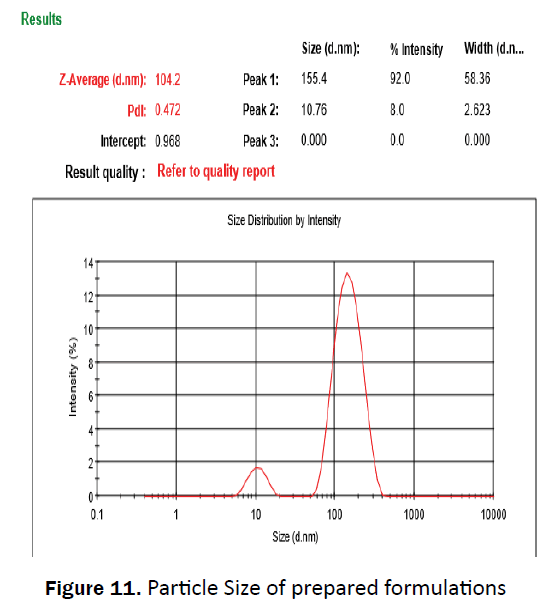 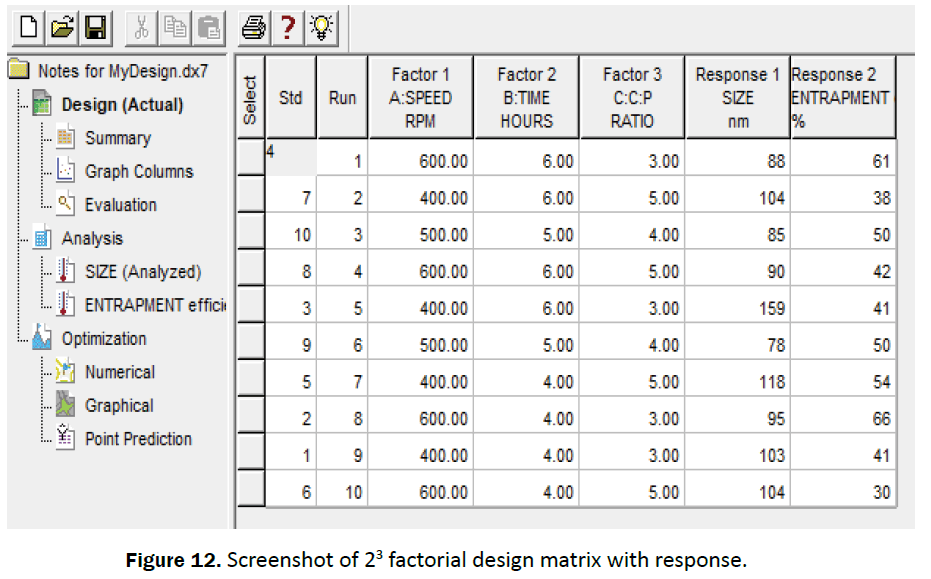 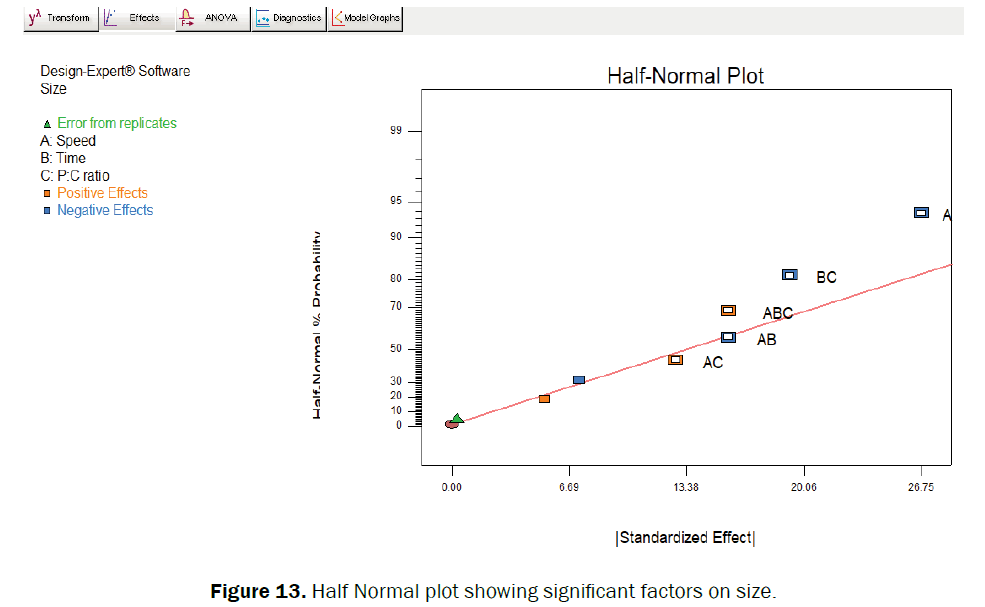 The half normal plot shows the point which constitutes positive or negative effect on the particle size. Here the significant factors affecting the particle size are A (speed) and BC (time and C: P ratio). 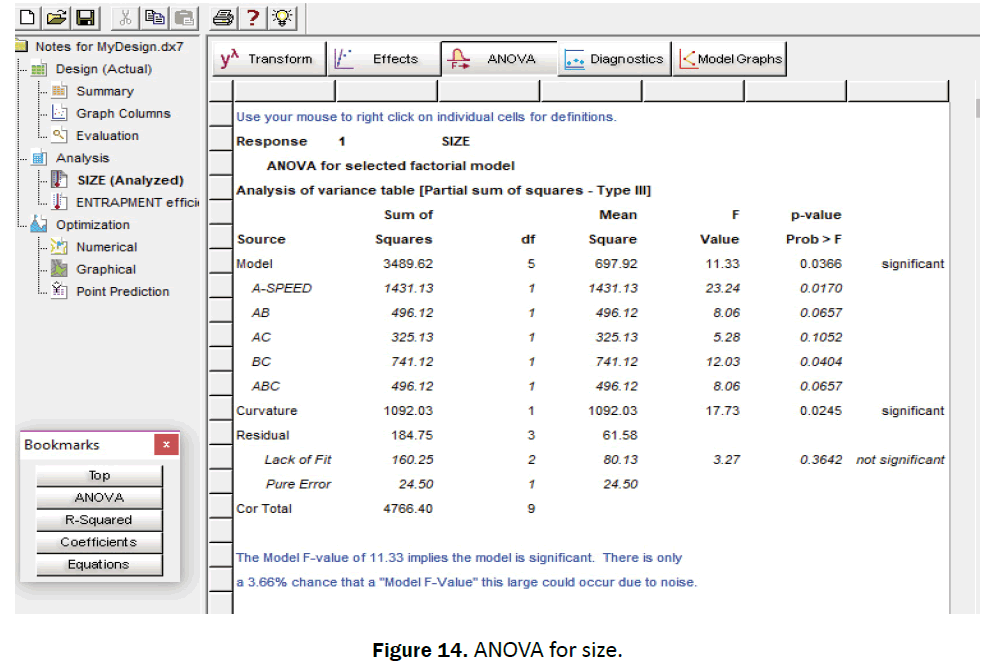 The "Pred R-Squared" of 0.2755 is not as close to the "Adj R-Squared" of 0.8659. "Adeq Precision" measures the signal to noise ratio. A ratio greater than 4 is desirable. Hence the ratio of 10.852 indicates an adequate signal. This model can be used to navigate the design space. The R- squared value of the regression is 0.9497. It means that 95% of variation in the size can be explained by the above model. That is the above equation is statistically capable to produce 95% of size (Table 8). 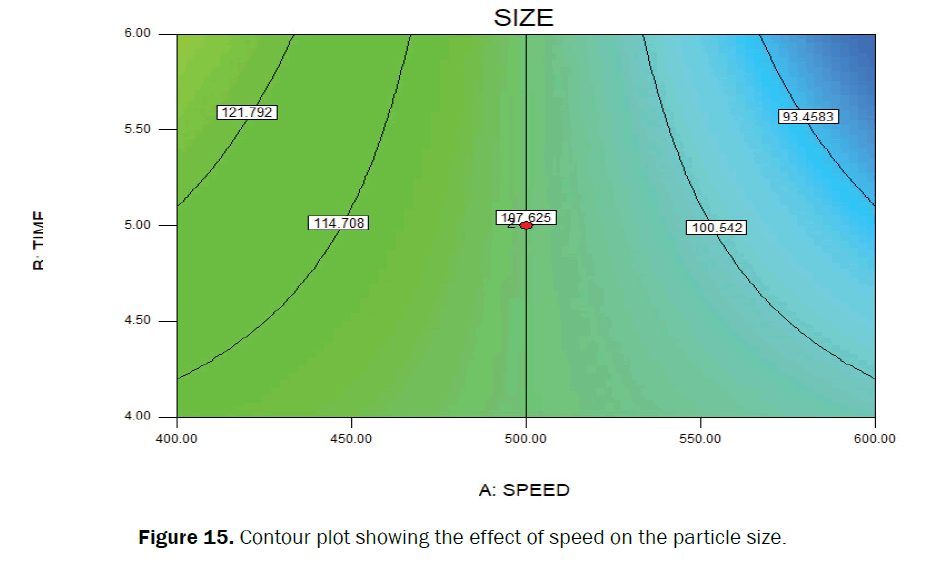 Figure 15. Contour plot showing the effect of speed on the particle size. 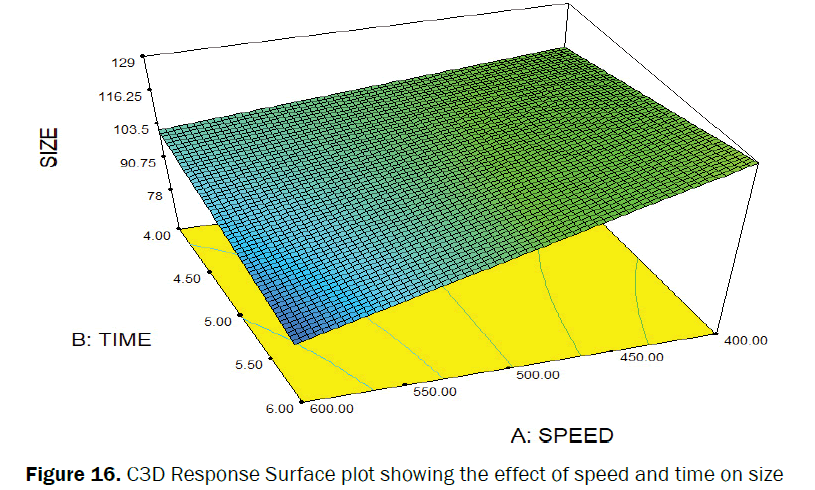 3D response surface plot shows that increase in the speed and time decreases the particle size. 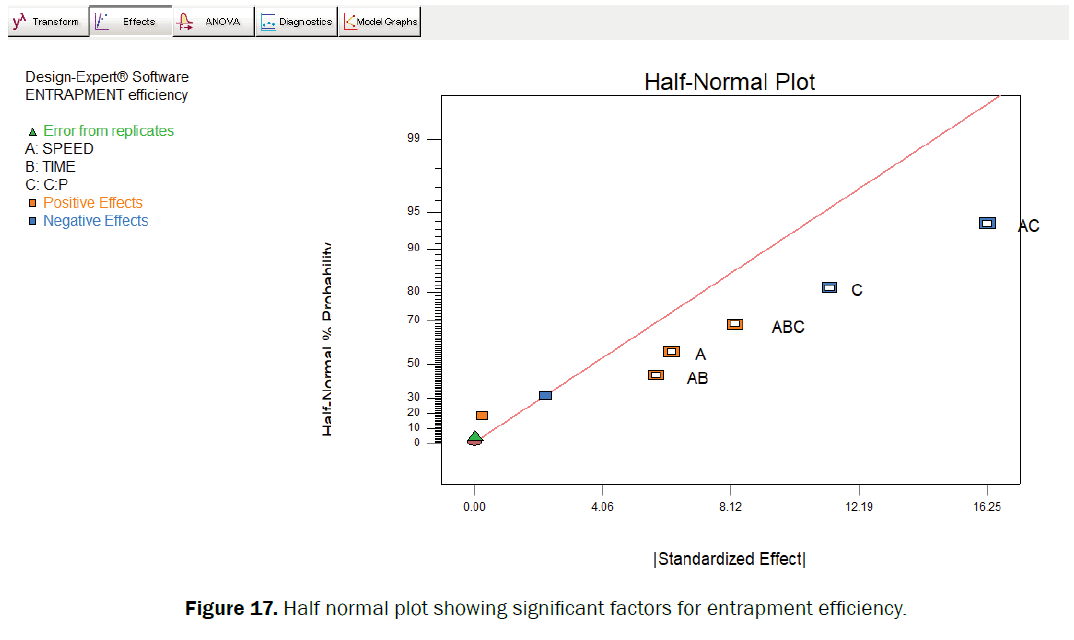 The Model F-value of 62.14 implies the model is significant. There is only a 0.31% chance that a "Model F-Value"is large. This large value could occur due to noise.Values of "Prob>F" less than 0.0500 indicate model terms are significant. In this case A, C, AB, AC, ABC are significant model terms. Values greater than 0.1000 indicate the model terms are not significant The "Curvature F-value" of 5.33 implies the curvature (as measured by difference between the average of the center points and the average of the factorial points) in the design space is not significant relative to the noise. There is a 10.41% chance that a "Curvature F-value" this large could occur due to noise (Figure 18). 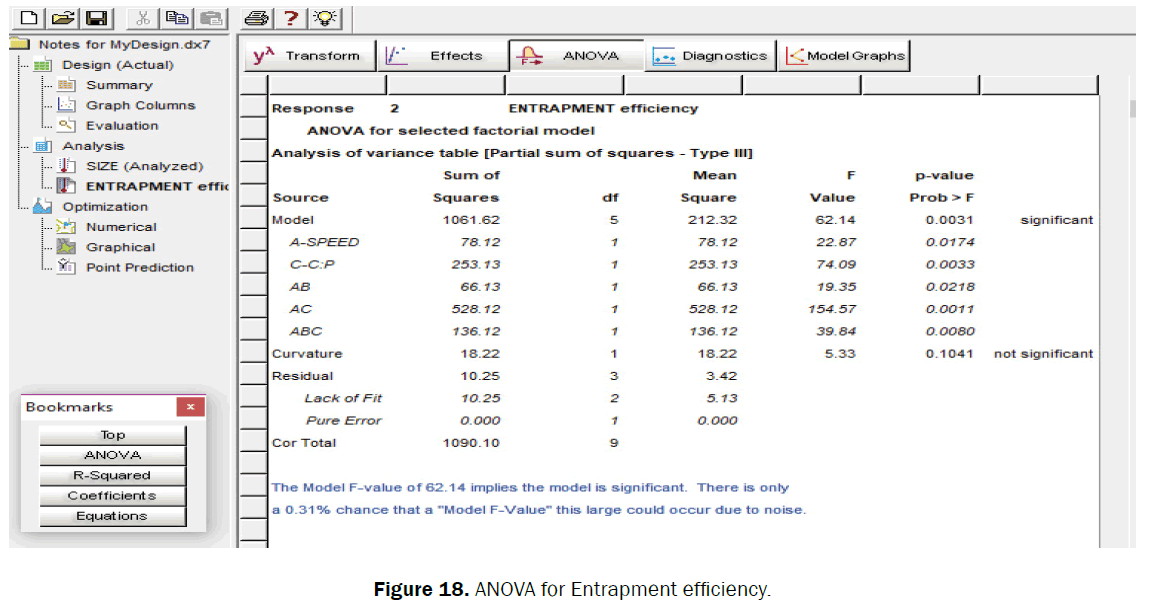 The "Pred R-Squared" of 0.8470 is in reasonable agreement with the "Adj R-Squared" of 0.9745."Adeq Precision" measures the signal to noise ratio. A ratio greater than 4 is desirable. Hence ratio of 23.117 indicates an adequate signal. This model can be used to navigate the design space.The R- squared value of the regression equation is 0.9904. It means that 99% of variation in the entrapment efficiency can be explained by the above regression model. That is the combination in the above equation is statistically capable to produce 99% of entrapment efficiency (Table 9). 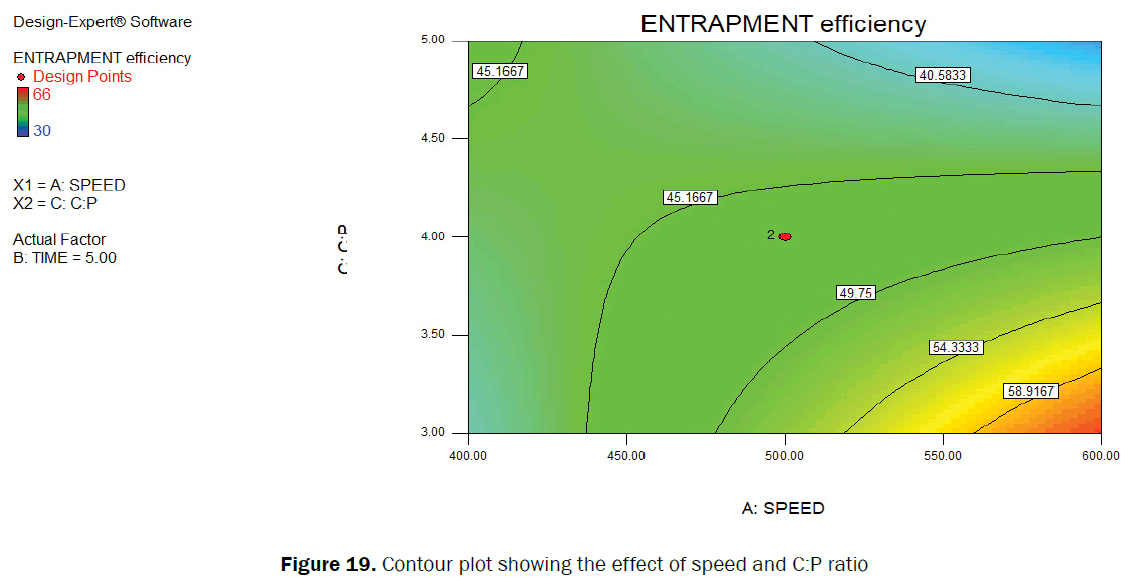 3D response surface plot shows that increase in the speed upto 500 and C:P ratio of 4 increases the entrapment efficiency. 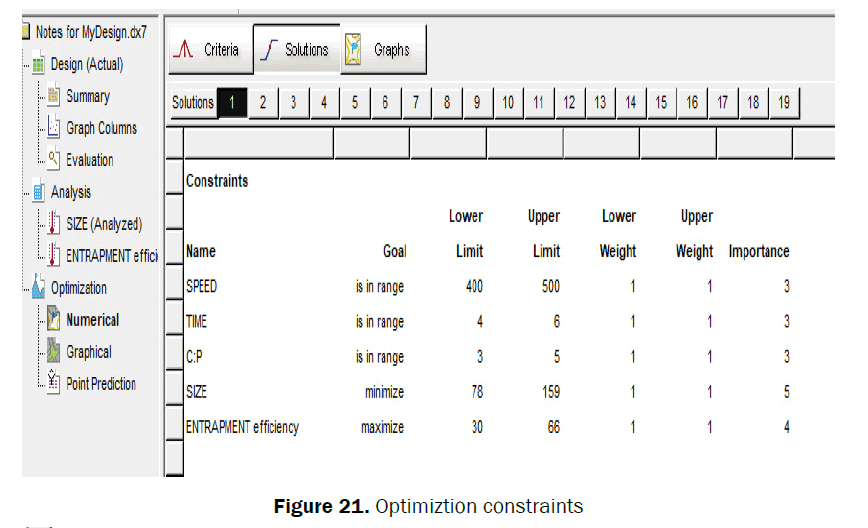 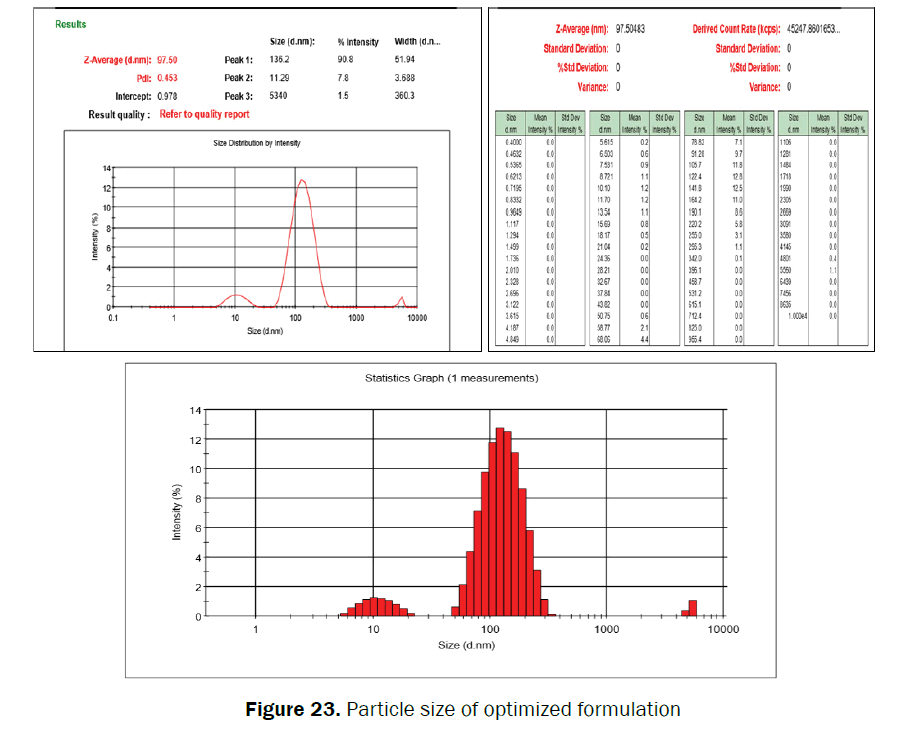 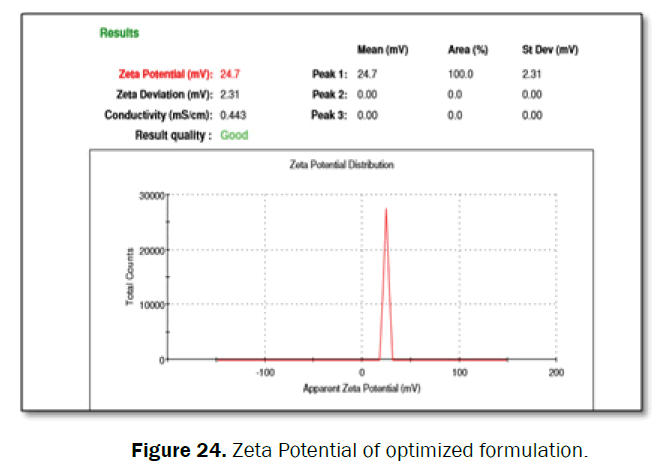 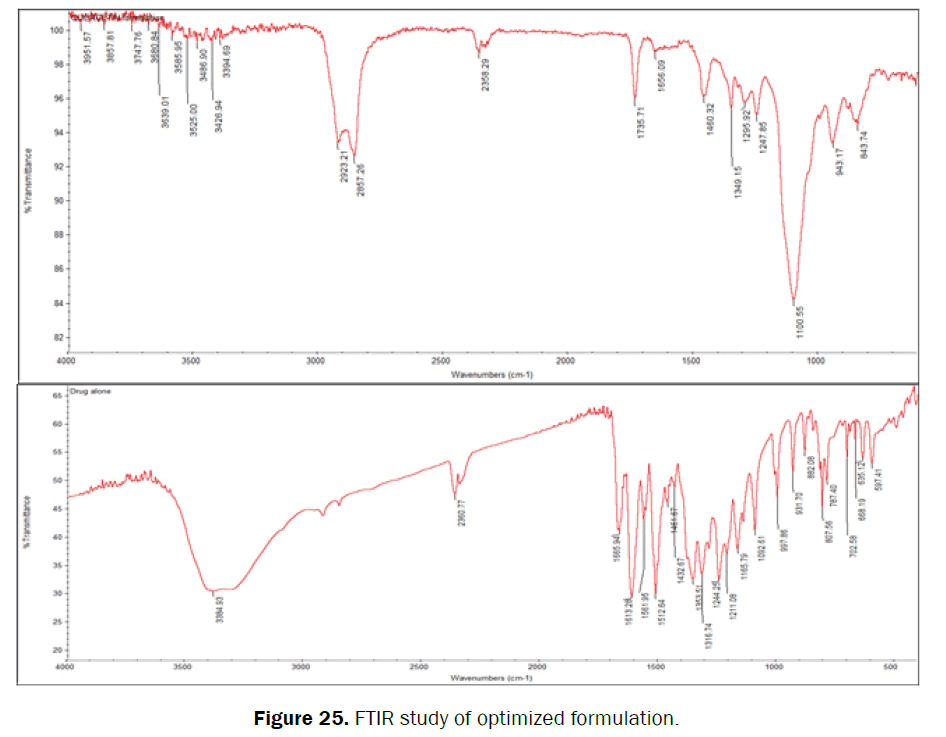 Surface morphology: The SEM and TEM analysis of the optimized formulation shows that they were irregular spheres with rough surfaces as shown in the (Figures 26-27).

Figure 28. Invitro release study of optimized formulation with image of dialysis membrane (before and after study – middle and last image).

From the result (Table 12), it was found that there was a initial burst release of about 30.7% in first 5 hours. This may be due to the release of the drug entrapped on the surface of nanoparticles. Later it was found to have a sustained release up to 36 hours with 93% of drug release. After which there was no release.

Kinetic study: The results of kinetic study of optimized formulation were illustrated in the (Figure 29 and Table 13). 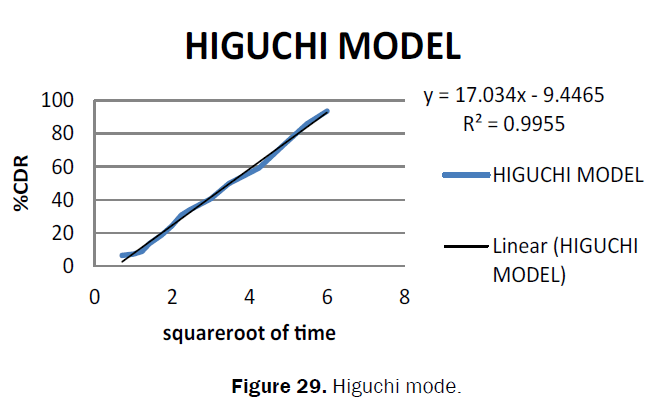 The release kinetics study of quercetin nanoparticles was carried out using dialysis technique. The drug release profile showed that there was a burst release of 30.7% in first 5 hrs and 93% was released in 36 hrs. In release kinetic study the release profile had a best fit with Higuchi model with R2 value of 0.995 and hence it was considered that optimized formulation has matrix type release characteristics.