Group A Streptococcal Sepsis in an Uncomplicated Underwater Vaginal Delivery

Pregnancy related Group A streptococcal sepsis has a high morbidity and mortality. It is usually an ascending infection that can rapidly progress to life threating shock. A woman had an uncomplicated full term vaginal delivery in a planned underwater birth and four days postpartum presented with Group A streptococcal puerperal sepsis. It is unlikely that the underwater birth contributed to either her initial sepsis or the complicated clinical course.

Pregnancy-related group A Streptococcus (GAS) sepsis is a rare condition that has high maternal and infant morbidity and mortality [1]. It is generally a disease of the postpartum period [2,3] and can progress rapidly if not treated aggressively. If not recognized early, it can be a fulminant infection with invasion of tissue, lymphatics and vascular structures resulting in the potential progression to life-threatening shock. GAS is not a normal urogenital inhabitant consequently the source is often undetermined [2,3].

Water birth or underwater birth is a practice defined as planned fetal emergence underwater and is a recognized vaginal delivery option in many developed countries [4]. Evidence about the safety and benefit of water birth has been mainly observational and descriptive, therefore potential risks for women and neonates are not established but appear minimal [4,5].

A 33 year old G1P1 delivered a full term infant at a local birthing center in a temperature controlled Jacuzzi tub 4 days prior to admission. Her prenatal care was given by a team of midwives and was uneventful. She had a negative third trimester urogenital group B streptococcal (GBS) culture.

Delivery records demonstrated an uncomplicated vaginal delivery with a second degree perineal laceration which was repaired. Membranes were ruptured for 2.5 h prior to delivery and estimated blood loss was 400 cc. She was in the water bath almost the entire labor.

On presentation at our facility she complained of increasing shortness of breath, abdominal pain, fever and difficulty voiding over the past day. She was lethargic and vital signs revealed a temperature of 99.1, pulse 121, respiratory rate 20 and blood pressure 97/73. Her physical exam revealed a critically ill appearing female lying in bed in moderate distress. Her mucous membranes were pink but dry and abdominal exam revealed a distended abdomen which was tender to palpation with absent bowel sounds. Her perineal laceration was purulent. Labs revealed a white blood cell count of 14.5 × 109/L, lactic acid 3.9 mg/ dL and platelet count of 94,000. She was admitted with probable endometritis and infected perineal laceration and started on parenteral vancomycin, peracillin/tazobactam and clindamycin.

An abdominal ultrasound (Figure 1) revealed a complex fluid collection in the pelvis extending into the left upper quadrant (LUQ) worrisome for possible hematoma or other proteinaceous fluid. 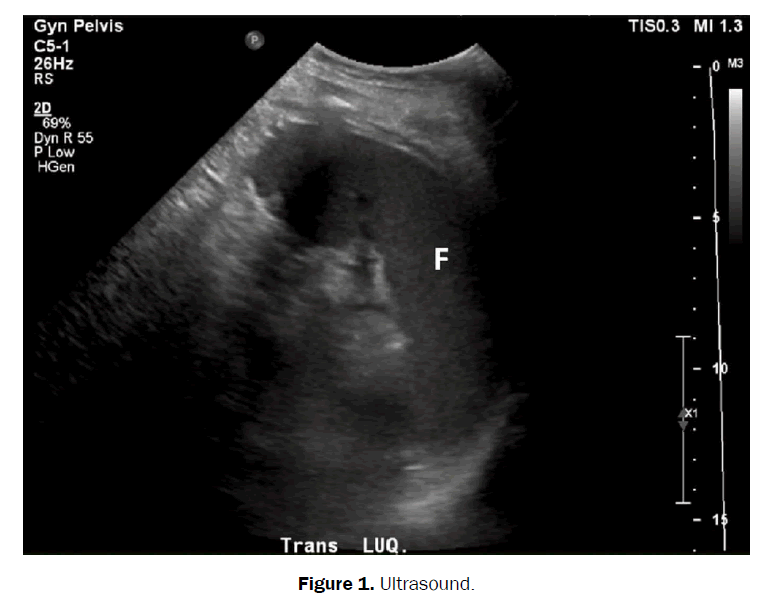 She was taken to the operating room for exploratory laparotomy and abdominal washout. There were no signs of viscous perforation or other possible source of infection or injury and a normal gallbladder was noted. It was concluded that the free fluid occurred secondary to fluid shifts and the septic state, as well as possible infection. Blood and vaginal cultures were sent and a dilation and curettage as well as debridement of perineal laceration was performed. On hospital day number 2 she remained intubated with ventilation settings being titrated down. A computed tomography (CT) of the abdomen/pelvis was performed demonstrating moderate ascending colitis. Her blood and vaginal cultures grew Streptococcus pyogenes (group A Streptococcus), susceptible to penicillin. Vancomycin and piperacillin/tazobactam were discontinued and the patient was started on ceftriaxone and continued clindamycin. She did receive 2 μ packed red blood cells, 2 μ fresh frozen plasma and 1 u platelets and hemoglobin was noted to improve from 9.4 g/dL to 11.0 g/dL.

On hospital day 3 she was extubated and transferred out of the ICU.

On hospital day 6 she had a worsening of her leukocytosis from 22 to 31 × 109/L and became febrile to 102.9°C. She denied abdominal or vaginal pain and was tolerating a regular diet. Abdominal exam and perineum were negative. She continued ceftriaxone but clindamycin was discontinued. MR abdomen was performed (Figure 2) and there was concern for ascending uterine infection. 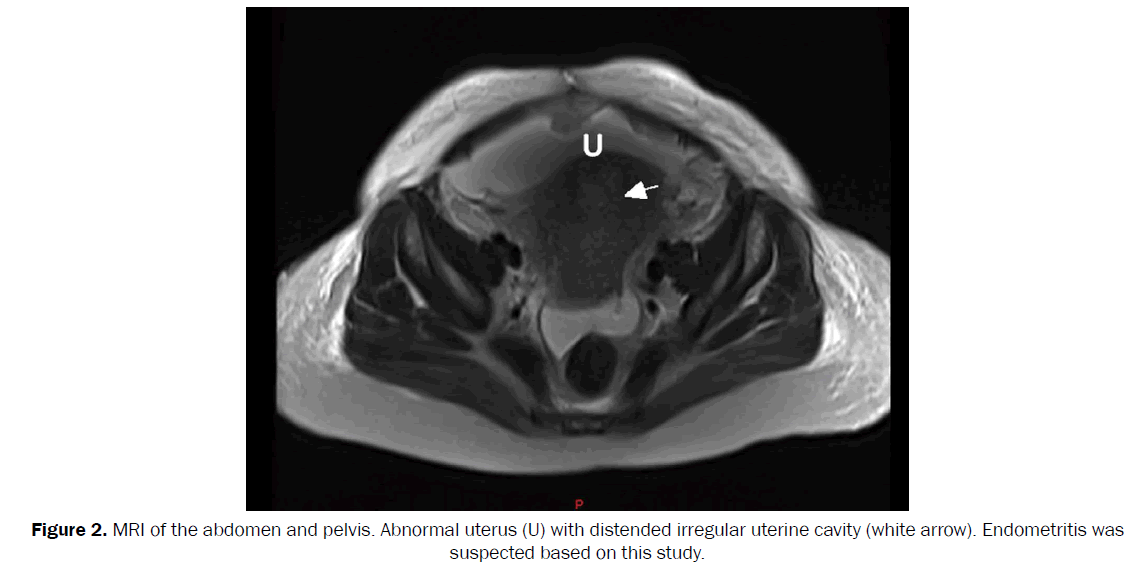 Figure 2. MRI of the abdomen and pelvis. Abnormal uterus (U) with distended irregular uterine cavity (white arrow). Endometritis was suspected based on this study.

She was taken back to the operating room for possible hysterectomy or visceral repair or colostomy. Intraoperatively there were no signs of infection in the uterus or bowel, as well as no signs of vaginal soft tissue infection or perineal cellulitis. No hysterectomy was performed. At this time ceftriaxone was discontinued and she was restarted on piperacillin/tazobactam.

On hospital day 8 she started to experience desaturation to the 80 s, requiring 4 L of oxygen via nasal cannula. She continued to be febrile with a maximum temperature of 102.9°C. On hospital day 9 secondary to recurrent fevers without a source, she was started on heparin 10,000 u every 8 h for presumptive septic pelvic thrombophlebitis (SPT). Her urine culture at this time grew out pseudomonas which was susceptible to piperacillin/tazobactam. She was started on aztreonam, vancomycin, flagyl and micafungin. Over the next several days she continued to spike fevers, mostly at night, despite broad spectrum antibiotic coverage and subcutaneous heparin. Fungitell assay for possible fungal bacteremia was performed and was negative and her antibiotics were deescalated to piperacillin/tazobactam and Micafungin. She was transitioned from heparin to Lovenox 90 mg every 12 h on hospital day 11.

On hospital day 12 the patient developed bradycardia with a heart rate of 47, as well as hypothermia with a rectal temperature of 95.5°C. CT angiography was performed to evaluate for possible septic emboli but was negative. Over the next several days her temperature returned to normal and bradycardia improved.

On hospital day 15 her condition continued to improve and antibiotics were discontinued. On hospital day 19, she was discharged on enoxaparin 80 mg every 12 h subcutaneously.

There are two unique components to this case. The first is the water birth and its association with the sepsis. The second is the virulent clinical course of the infection.

Infectious risks of a water birth to the mother and neonate have been reported [5]. Pinette reviewed 16 citations and noted that 11% of all reported complications were waterborne infections. With the exception of a single case of Streptococcus meningitis (presumably Streptococcus agalactiae), Pseudomonas and Legionella were the only microbial pathogens isolated in the infected mother-infant reports. Other data suggest the incidence of infectious complications of water birth is no different from traditional birth in developed areas [4,6]. Nonetheless, the origin of our patient’s sepsis is not clear. Only 15% of GAS sepsis cases are considered nosocomial [2], but the incidence may be related to the postpartum day the illness presents. She presented on postpartum day 4 which suggests she had an ascending infection likely following urogenital acquisition of GAS from the birthing center, their health care workers or home environment [2]. Based on a previous report [5] we know Streptococcus can be cultured from a birthing tub. However, considering the lack of infection in the newborn infant, the history of successful non-infected births and the sanitation at the birthing center it appears unlikely the GAS was acquired in the birthing center bath. Finally, it is unlikely she suffered from hematogenous spread through an upper respiratory infection since there was no history of symptoms or exposure [7]. One item that is certain is that she had a negative urogenital culture for GBS in the third trimester and since GAS will also be detected it is unlikely she was an asymptomatic urogenital GAS carrier [8]. Regardless of the source, the attack rate and virulence of GAS is reported to be significantly higher in pregnant and postpartum women [9] and that is exactly what happened in our patient.

The second important element to this case was the near fatal clinical course. Pregnancy-related GAS sepsis is known to be a disorder of high maternal morbidity and mortality and the clinical features our patient had were similar to most prior reports until hospital day 6 when her condition unexpectedly deteriorated. She was taken back to the operating room for a second exploration and subsequently back to the ICU for support for multi-organ failure. Exploratory surgery during the initial phases of care for postpartum GAS sepsis is not uncommon. In fact, one report [2] suggests up to 33% of women will have one surgical exploration. Two surgeries, however, is unreported when a suppurative complication is not present. It is more likely that the delay in presentation contributed to the catastrophic clinical course than the water birth.

In summary this case probably reflects an ascending infection by group A streptococci. The infection likely started during the immediate postpartum period and was transmitted to the patient by either health care workers or family [10]. The water birth probably had little to do with either the transmission or the complicated septic clinical course.