Hepatorenal syndrome (HRS) in sepsis has become an accepted approach since 2007, type I HRS being particularly characteristic of modifications occurring in sepsis. The aim of this study was to identify correlations between the microbiological, clinical and biochemical elements in patients with hepatic/ renal dysfunctions and HRS in sepsis. The study included 117 patients with sepsis, admitted in the Infectious Disease Clinical Hospital in Iasi, Romania, from November 2012 to April 2014, patients who presented with or developed hepatic or renal dysfunction, HRS, and other organ dysfunctions. A statistical analysis of paraclinical parameters was carried out in the context of clinical modifications. We have identified statistical correlations between serum creatinine level and the degree of severity in sepsis, as well as between total bilirubin level and altered neurological status (coma, confusional state). Using ROC curve analysis, the optimal cut-off values for ALT, AST and total bilirubin were set at 78 IU/L, 75.5 IU/L and 25.5 mg %, respectively, while the Quick Index, in an inversely proportion relationship with unfavourable evolution of liver disease, had a cutoff value of 66%.

During the 19th century, Frerichs and Flint described an association between advanced impairment of liver function, ascites and renal insufficiency with oliguria, in the absence of renal histological changes [1]. HRS is characterized mainly by functional renal failure that is not usually related to significant injuries in kidney anatomy or histology, the etiopathogenic substrate of HRS consisting of an important vasoconstriction of renal arterial system [2,3].

A consensus on the definition of HRS was published in 1996 by the International Ascites Club, describing this syndrome as renal failure that occurs in the presence of severe liver disease, acute or chronic, but in the absence of underlying renal pathology. At that time, HRS was an exclusion diagnosis accepted in the absence of hypovolemia, nephrotoxic drugs, sepsis and glomerulonephritis [4].

Numerous pertinent studies showed the relation between HRS and the renine-angiotensin-aldosteron system (RAAS), sympathetic nervous system (SNS) and renal prostaglandins (PG) [5]. Endothelin is another vasoconstrictor present in high concentration in HRS, although its role in HRS pathogenesis is not fully understood [5]. The pathophysiological hallmark of HRS is intense renal vasoconstriction, multiple mechanisms being involved in the disturbance of systemic hemodynamics, activation of vasoconstrictor systems and reduction of vasodilation [3,5].

A number of hypotheses have been proposed to explain liver function involvement in HRS and cirrhosis, the most widely accepted ones pointing to arterial vasodilatation and hepatorenal reflex. Splanchnic arteriolar vasodilatation appears in patients with cirrhosis and portal hypertension mediated most probably by nitric oxide [6].

Until 2006, HRS definitions had referred to a reversible functional kidney damage that occurs in patients with advanced liver cirrhosis or fulminant liver failure and is characterized by reduction in glomerular filtration rate and renal plasma flow, in the absence of other causes of renal dysfunction [7]. With the rise of knowledge, it was shown that the original definition lacked concision with respect to a large number of exclusion criteria, sepsis being one of them [8]. Before revision in 2007, guidelines proposed the exclusion of bacterial infections for the HRS diagnosis [2].

The triggering factor for HRS is the decreasing in renal blood flow due to vasoconstriction under the influence of multiple neurohumoral factors, activation of rennin-angiotensin-aldosterone system, endothelins and natriuretic peptides [2].

The major mechanism of HRS consists of an extreme renal vasoconstriction caused by activation of Na+ retention and vasoconstrictor systems, resulting in a very low glomerular filtration rate [9,10]. Peripheral arterial vasodilatation theory sustains that splanchnic vasodilatation is a result of portal hypertension from cirrosis [2].

Using the available regarding the type of HRS, a number of studies showed that terlipressin improves kidney function by more than 65% in patients with type 1 HRS, with a significant increase in survival rate [11-13]. Patients with sepsis were excluded from all these studies, at that time in agreement with the original definitions of HRS [14]. More recently, Rodriguez et al. presented the results of a study assessing the role of terlipressin and albumin in patients with HSR type I and sepsis, pointing out the similarity with the results found by studies which had excluded patients with sepsis [14].

HRS has been defined as a deficit in the prerenal segment, which is a preischemic status determined by tubular necrosis due to ischemia, when reduced blood flow is the result of acute tubular necrosis [15].

Type 1 HRS is characterized by a rapidly progressive renal failure – a doubling of the initial serum creatinine level exceeding 2.5 mg/dl or 220 μmol/l in less than 2 weeks [16]. Although it may appear spontaneously, type 1 HRS often develops with a precipitating event, particularly spontaneous bacterial peritonitis. Type 1 HRS occurs in an acute deterioration of the circulatory function (arterial hypotension and activation of the endogenous vasoconstrictor systems), frequently associated with a rapid degeneration of the liver function and encephalopathy and carries a very poor prognosis [17].

The study was conducted at the Infectious Disease Clinical Hospital, in Iasi, Romania and included patients diagnosed with sepsis from November 2012 to April 2014, assessing data both from their observation records and annexed documents, with a signed informed consent for the use of data for research purposes. We included 117 patients with sepsis associating hepatic/ renal dysfunction, hepatorenal syndrome and other organ dysfunctions.

For these patients we evaluated the following: demographic data (age, gender, originating environment), length of hospital stay, disease etiology, initial and subsequent laboratory data, prognostic scores APACHE and CARMELI prognostic scores, the presence of liver/kidney dysfunctions, and the evolution towards improvement or death. Sepsis diagnosis inclusion was in accordance with the definition of suspected or proven infection, sustained by the systemic inflammatory response syndrome (at least 2 of the following criteria: fever/hypothermia, tachycardia, tachypnea and leucocytosis/leukopenia).

We created an EXCEL database which included descriptive, qualitative and quantitative parameters, while data processing was performed using the SPSS 16.0 version, the level for statistical significance being considered for p<0.05. We applied the t student test, chi-square test, Box Plot charts, the Pearson correlation for normally distributed variables, the Spearman correlation independent of the distribution type and based on the order of rank values, and the Pairwise Comparisons test for data comparison with small samples. Where data was not normally distributed we used the Mann-Whitney test for comparing two sets of variables, while the Kruskal-Wallis test was used for comparing multiple data sets. The ROC curve was used to determine the sensitivity/ specificity of diagnostic tests in hepatorenal dysfunction in sepsis.

Patients’ average age was 62.9 years, the median being 65.5. Environment of origin was, in relatively equal proportions, urban and rural, and etiologic agents were identified in 67 of the 117 patients (Table 1). Currently, there is no specific diagnostic test for a univocal determination of HRS, only a diagnosis of exclusion based on the revised criteria of the International Ascites Club. Primary investigations consisted in identifying the glomerular filtration rate, with Creatinine Clearance <40 ml/min or increased serum creatinine >135 μmol/L in the context of the exclusion of other causes of renal dysfunction. The most relevant indicator of the functional capacity includes natriuresis <10 mmol/L, urinary osmolarity >plasma osmolarity, natremia <130 mmol/L and diuresis <500 ml/24 h.

Patients were included by selection from among those with sepsis, which, besides the multiple organ dysfunction, associated hepatic and renal dysfunction. The absence shock previous to setting the diagnosis of hepatorenal syndrome was considered the selection criterion according to the International Ascites Club which defines the association of hepato-renal syndrome in sepsis [17]. 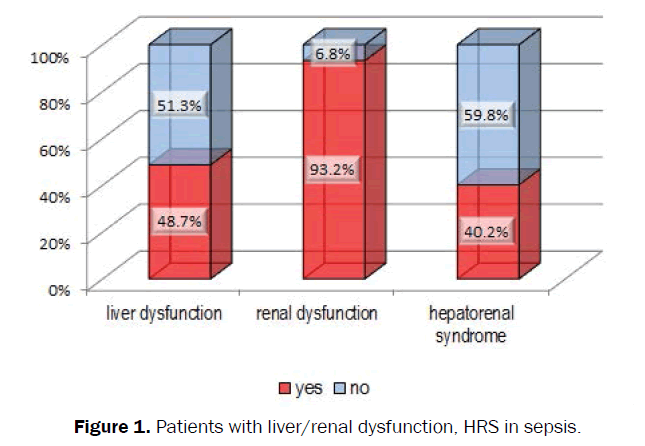 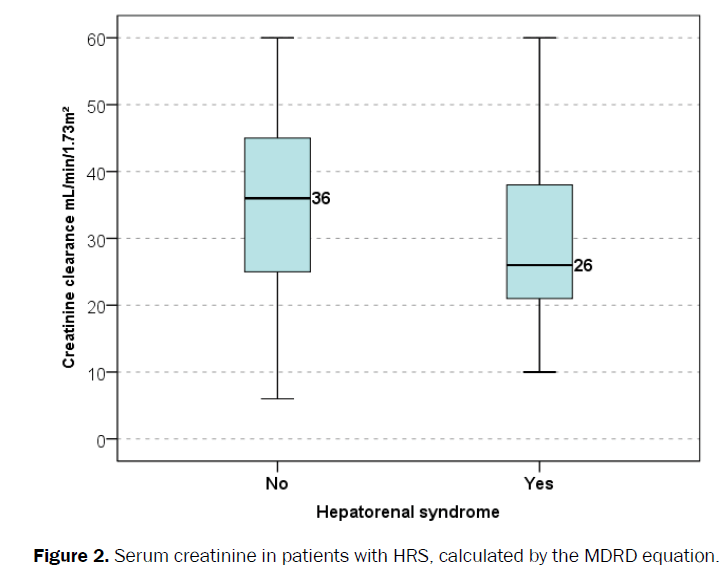 Figure 2. Serum creatinine in patients with HRS, calculated by the MDRD equation.

In calculating the APACHE score, we considered as reference points values between 0-20 (class I), 20-30 (II) and over 30 (III). Statistical correlations between creatinine clearance levels and three categories of values for the APACHE score calculated were established by comparing data sets using the Kruskal Wallis nonparametric test (the equivalent of ANOVA) for independent samples, obtaining a significance value p=0.44. Comparing pairs, we found a statistical significance only where creatinine level upon admission was concerned for APACHE I compared to APACHE III and as shown in Figure 3, the APACHE III group had the lowest creatinine value. 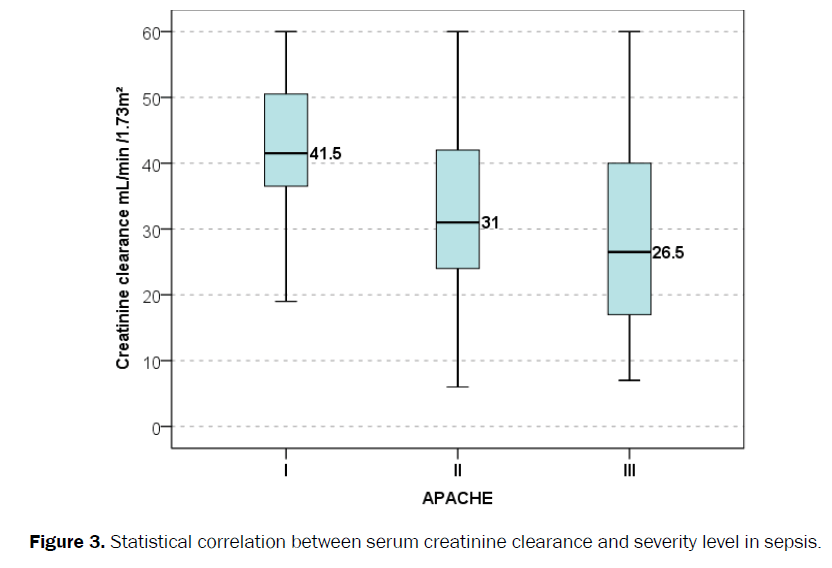 The usefulness of paraclinical tests in emphasizing liver dysfunction in hepatorenal syndrome was studied using sensitivity/ specificity curves (Figure 4). The optimal cut-off values in patients with hepatorenal dysfunction in sepsis, according to the results of statistical calculation, were 78 IU/L, 75.5 IU/L and 25.5 mg %, for ALT, AST and total bilirubin, respectively and an inversely proportional Quick Index (QI) value of 66%. We have tried also to establish correlations between total bilirubin levels and altered neurological status (coma, confusional state), the data we obtained indicating a statistical significance p=0.01. Therefore, we obtained correlations between total bilirubin values and the presence of neurologic status deterioration (coma, confusional state) in patients with hepatorenal dysfunction in Figure 5. 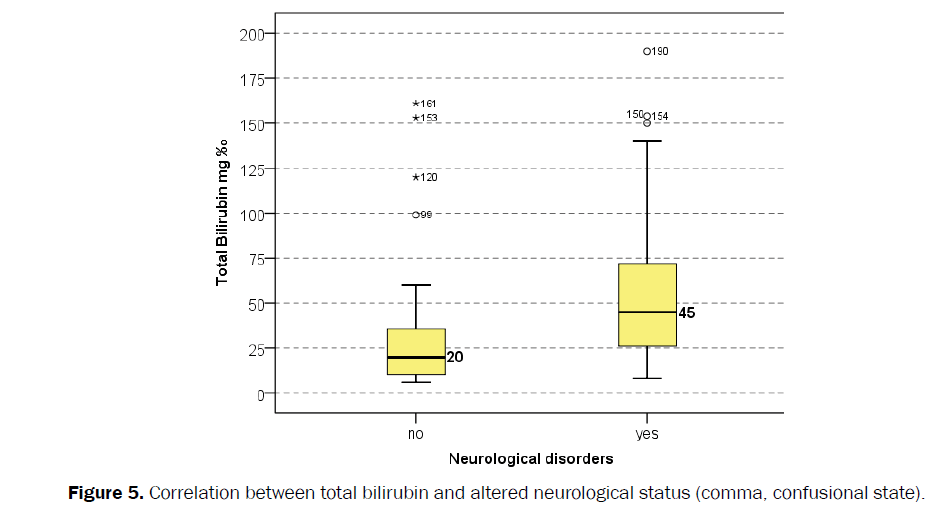 In patients with hepatorenal dysfunction in sepsis, there have been observed statistical correlations between serum creatinine level and the severity of sepsis, as well as between total bilirubin level and altered neurological status (coma, confusional state).

Cut-off values on the sensitivity/specificity curve in patients with hepatorenal dysfunction in sepsis were 78 IU/L for ALT, 75.5 IU/L for AST, 25.5 mg % for total bilirubin, while the QI, in an inversely proportional relationship with unfavourable evolution of liver disease, had a cut-off value of 66%.

Although the standard definition of hepatorenal syndrome refers to the precise values of biochemical parameters with hepatic and renal function deterioration, setting a diagnosis of hepatorenal syndrome for the critical patients with sepsis remains a challenge for the clinician, the elements of the clinical and biological evolution picture proving difficult to fit in correlation charts.

I would especially like to thank the Department of Statistics and Bioinformatics of “Grigore T. Popa” University of Medicine and Pharmacy who helped us with data processing.