Identification of Serious Drug: Drug Interactions During Ward Rounds at Civil and Dow University Hospitals: Results of Partnership to Prevent the Negative Outcomes

Objective: To develop a list of clinically important Drug-Drug Interactions (DDIs) likely to be encountered in hospital pharmacy settings that were detected by a computerized pharmacy system.

Conclusion: The drug interactions that are likely to occur in the hospital pharmacy settings were identified so that the pharmacists should take steps to prevent patients from receiving these interacting medications, and computer software vendors should focus interaction alerts on these and similarly important DDIs. This is an example of active clinical training of undergraduates of Pharmacy.

The 1999 Institute of Medicine's (IOM) report on medical errors “To Err Is Human” push the attention towards numerous inadequacies of the American health care system. This report suggested that between 44,000 to 98,000 persons die annually from medical errors within hospitals. The IOM specifically identified medication errors as one of the key subsection of all medical errors. Furthermore, the economic burden of drugs is substantial that makes the issue more cumbersome. Medication errors, a subset of medical errors, account for more than 7,000 deaths annually in the United States. The involvement of Drug-Drug Interactions (DDIs) to the total of these errors in the United States is still not confirmed. An upsurge in elderly population and increased complexity of medication regimens used to treat ambulatory patients followed by a fragmented healthcare system with multiple prescribers managing each patient make the occurrence of DDIs even more likely [1].

Hospital pharmacists rely on their knowledge of interactions and dispensing software to identify potential DDIs. In addition, hospital pharmacists have been at the forefront in applying technology designed to reduce medication-related errors, including DDIs. To improve electronic systems and patient safety in the area of DDIs, we created the partnership to prevent DDIs (PP-DDIs) that consists of hospital pharmacists/clinical pharmacists, faculty and students of Dow College of Pharmacy for their expertise. The PP-DDIs' overall objectives were to identify clinically important DDIs based upon a systematic review, identify and assess current strategies for preventing DDIs, and to design, implement, and assess better strategies for preventing DDIs.

The purpose of this study was to develop a list of the clinically important DDIs that are likely to be encountered in hospital pharmacy settings and detected by a computerized pharmacy system. A three-stage process was undertaken to identify DDIs of the highest clinical importance. Clinically important interactions were defined as those interactions most likely to cause harm if not detected. These evidence reports were then evaluated and rated by an expert panel using a DDI checker website. For each DDI combination, the object and precipitant drugs were defined for each when possible. For a particular DDI, the object drug was defined as the medication whose therapeutic effect is modified leading to the misadventure associated with the interaction. The precipitant drug is the medication that is responsible for affecting the pharmacologic actions or pharmacokinetics of the object drug [2].

The first stage in our process was to select candidate DDIs from existing drug interaction compendia. Interactions rated as most severe or "major" were selected from each of the four commonly used DDI compendia (Evaluation of Drug Interactions,Drug Interaction Facts,Drug Interactions: Analysis and Management, and MICROMEDEX (DRUG-REAX) system) and then cross-referenced to each other. Since each compendium uses a slightly different rating system to classify DDIs, criteria specific to each was developed. Interactions were selected for further review if they were listed in three of the four compendia. The focus of this research was to prevent DDIs in hospital pharmacy settings. Thus, several interactions were excluded as mentioned: the drug was not available anymore for human use in the Pakistan; the drug was not routinely dispensed in the hospital pharmacy setting (e.g., dopamine, halothane); or the interaction involved a product not likely to be captured by a computerized database, such as nonprescription medications, alcoholic drinks, or foods; prescriptions from ICU were not included; and the prescriptions having more than 4 drugs prescribed were evaluated. Two additional criteria were applied in this analysis to exclude DDIs in which the medications were commonly used together to achieve a therapeutic benefit or the interaction occurred upon discontinuation of one of the medications [3].

The third stage of this investigation was designed to narrow the list of DDIs to those that were clinically important, well-supported interactions that should become primary targets for future surveillance and intervention. The expert panel was provided a summary of each interaction, copies of the key articles, and a bibliography for each interaction. The classifications below are a guideline only. The relevance of a particular drug interaction to a specific patient is difficult to determine using this tool alone given a large number of variables that may apply.

The study does not directly deal with any samples of patients to study. It only comprises the evaluation of their expected prescription data that is the professional responsibility of working hospital pharmacist. Potential drug-drug interactions that were likely to occur were identified using the software. The process does not harm the patients in any way [4].

The number of severe or major interactions identified in each compendium. 98 DDIs were found in at least 3 out of the 4 compendia. The number of major, moderate and minor interactions amongst all the evaluated prescriptions was observed to be 32, 85 and 51 respectively (Figure 1) (Table 1).

As detailed below, 25 DDIs were excluded from further consideration for one of the five reasons for exclusion presented in the Methods: 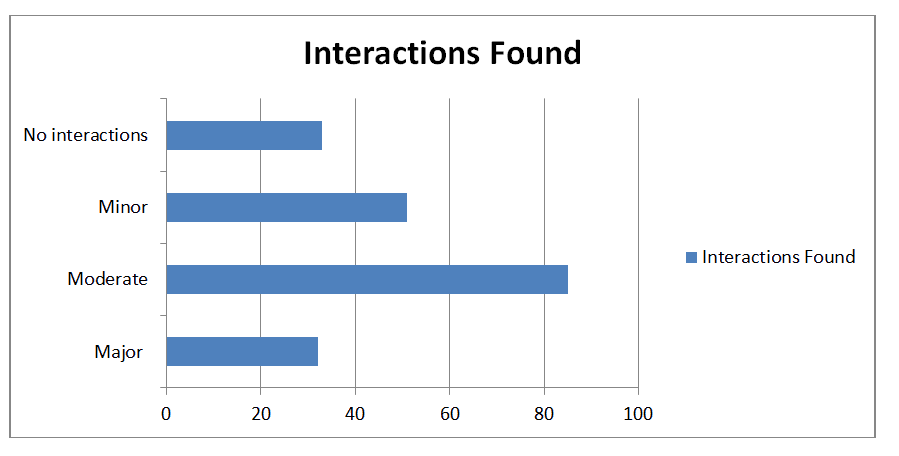 We used a systematic evaluation of the literature and an expert-panel process to identify clinically important DDIs. Our panel evaluated 168DDIs. After excluding products that were not on the Pakistani market, products not likely to be used in an outpatient setting, and combinations that can be used for therapeutic benefit, a total of 13 clinically significant DDIs identified.

The most common chief DDI found is between Ciprofloaxcin and Lumefantrine. Artemether-lumefantrine may cause extension of the QT interval. Theoretically, coadministration with other agents that can prolong the QT interval may result in additive effects and increased risk of ventricular arrhythmias including torsade de pointes and sudden death. In clinical trials, asymptomatic perpetuation of the Fridericia-corrected QT interval (QTcF) by more than 30 msec from baseline observed in approximately one-third of patients treated with artemether-lumefantrine, and extension by more than 60 msec reported in more than 5% of patients.

A few patients (0.4%) in the adult/adolescent population and no patient in the infant/children population experienced a QTcF greater than 500 msec. However, the possibility that these increases were disease-related cannot be ruled out. In a study of healthy adult volunteers, administration of the six-dose regimen of artemether-lumefantrine associated with mean changes in QTcF from baseline of 7.45, 7.29, 6.12 and 6.84 msec at 68, 72, 96, and 108 hours after the first dose, respectively. There was a concentration-dependent increase in QTcF for lumefantrine. No subject had a greater than 30 msec increase from baseline nor an absolute increase to more than 500 msec.

In general, the risk of an individual agent or a combination of agents causing ventricular arrhythmia in association with QT prolongation is largely unpredictable but may be increased by certain underlying risk factors such as congenital long QT syndrome, cardiac disease, and electrolyte disturbances (e.g., hypokalemia, hypomagnesemia). In addition, the extent of drug-induced QT prolongation is dependent on the particular drug(s) involved and dosage(s) of the drug(s).The concurrent use of artemether-lumefantrine with other medications that can prolong the QT interval should generally be avoided. Caution is advised when these agents are used following treatment with artemether-lumefantrine due to the long elimination half-life of lumefantrine (3 to 6 days).

Patients should be encouraged to seek medical attention if they experience symptoms that could indicate the occurrence of torsade de points such as dizziness, lightheadedness, fainting, palpitations, irregular heartbeat, shortness of breath, or syncope.

Hundreds of drug interactions itemized in the various drug interaction compendia; however, these references vary considerably, and this is the first effort to systematically rank order interactions regarding their clinical importance. Pharmaceutical manufacturers appear to be gradually meticulous in identifying and reporting DDIs. However, DDI compendia appear to rely on individual authors or a small number of editors to evaluate interactions, and the result is considerable inconsistency among the compendia on what represents a serious DDI.

Pharmacists have not surprisingly been conditioned to ignore the vast majority of drug interaction alerts. Even pharmacy computer systems differ significantly as to which interactions trigger warnings.

Few published articles examine pharmacists' knowledge of DDIs, but one study suggested that pharmacists' recall of serious DDIs is approximately 50% to 70%. In this analysis, pharmacists' ability to detect serious DDIs was a function of the number of medications in the patient profile.

The consequences of being exposed to an interaction are not trivial. Recently reported that the risk of hospitalization substantially increases for those patients exposed to a DDI.

Automated prescribing systems have been suggested as a possible solution to decreasing medication errors. Advances in computer technology, however, have expanded the role of these systems, providing opportunities to reduce a variety of potential medication errors. Physicians make prescribing decisions based upon individual patient characteristics, diseases, and numerous social and economic factors.Technological systems, though sophisticated in their own right, lack much of the patient data and the medical reasoning that is part of the prescribing process [5].

Electronic prescribing systems may be able to link to patient-level information, such as health plan eligibility, formulary listings, patient history, medication records, allergies, and concomitant conditions. Some systems allow physicians to enter patient diagnosis and receive instantly a list of possible alternative treatments with appropriate dosing information. The high number of alerts that do not require pharmacist action diminishes the effectiveness of clinically important alerts. The goal of our study was to identify those DDIs that should always generate an alert to a physician or other prescriber and the pharmacist. As a starting point to improve computer systems that support patient care, alert messages should occur only when DDIs are clinically relevant and have a high probability of causing harm.

The literature has demonstrated pharmacists and prescribers cannot rely on computerized systems alone to identify interactions. In addition, other studies have found that health professionals' knowledge of serious interactions is lacking. Therefore, multifaceted interventions are important, including continuing education, retrospective drug utilization review, and letters sent to prescribers with patient-specific information [6].

Using an expert panel and a standard evaluation tool, we identified 13 drug interactions deemed to be clinically important and likely to occur in the hospital pharmacy settings. These interactions represent a subset of all interactions that have been noted by drug interaction compendia as being of high severity or major importance. We encourage pharmacists to take steps to prevent patients from receiving these interacting medications and computer software vendors to focus interaction alerts on these and similarly important DDIs. To achieve this, academics from Pharmacy institutes should train the undergraduates in a way that they should become the active member of society practicing the profession with clarity of mind and professionalism. We claim that this manuscript is one such example.

The authors claim no conflict of interest.

Authors want to acknowledge support and guidance provided by Dr. Shaukat Muttaqi, (Pharmacist at Dow University of Health Sciences during the conduct of study).