The Washington State Pharmacy Quality Assurance Commission (PQAC), formerly known as the Washington State Board of Pharmacy, was authorized established by the legislature in 1891. The duties of its fifteen members include the oversight of thirteen credentials totalling 33,780 licensees and the management of the sale of OTC drugs used to manufacture methamphetamine. The Commission regulates the profession by adopting rules to establish qualifications, competencies, and standard of practice for dispensing, distribution, wholesaling and manufacturing of drugs and devices.

The Washington State Pharmacy Quality Assurance Commission (PQAC), formerly known as the Washington State Board of Pharmacy, was authorized established by the legislature in 1891. The duties of its fifteen members include the oversight of thirteen credentials totalling 33,780 licensees and the management of the sale of OTC drugs used to manufacture methamphetamine [1]. The Commission regulates the profession by adopting rules to establish qualifications, competencies, and standard of practice for dispensing, distribution, wholesaling and manufacturing of drugs and devices.

The mandate of the Pharmacy Commission is to protect the public’s health and safety and to promote the welfare of the state by regulating the competency and quality of professional healthcare providers under its jurisdiction [2]. To wit, PQAC’s mandate of protecting the public is facilitated through judicious regulatory oversight of the laws and rules governing the practice of pharmacy and through a complaint driven investigative process.

The Health Systems Quality Assurance Division of the Washington State Department of Health (DOH) publishes a biannual summary of the complaints and disciplinary process for all health professionals, including pharmacy. Statistics from this supplemental report are reported for the years 2013-2015. This broad statistical report is interesting, but lacks specific descriptive information. Therefore, a random sample of pharmacy related complaints filed in 2014 and inspection infractions for 2014 are reported, as it may be more meaningful to licensees to review the nature of the activity of the Commissions’ tasks. This is a learning opportunity for licensees who might wish to improve their job performance. It should be noted that to protect the identity of the individuals and firms involved, these summaries do not include any outcomes or correlations related to the complaints or inspection infractions reviewed and that the data provided is meant to be informative only.

In August of 2015, all files containing PQAC related complaints for the 2014 calendar year were transferred to the DOH office in Tumwater. Then, a random sample containing 75% of the files were reviewed to obtain the type of the information found in the following (Tables 1-6). These tables characterize the type of Pharmacy, Respondents, and Whistleblowers as well as the nature of the complaints. The data was then entered into Microsoft Excel® spreadsheets to generate the tables presented later in this document.

The four-year summary of statistics was provided by the Washington State Department of Health on October 23, 2015.

The Pharmacy Commission continues to receive on average 450 complaints per year. The number of investigations authorized has increased in the last two years. We authorize on average 60% of all complaints for investigations. The average number of days to complete an investigation increased in FY15 due to a small subset of complicated cases that were conducted concurrent with federal authorities. Despite their complex nature, the average investigative days remained compliant with statutory timelines (Figure 1). 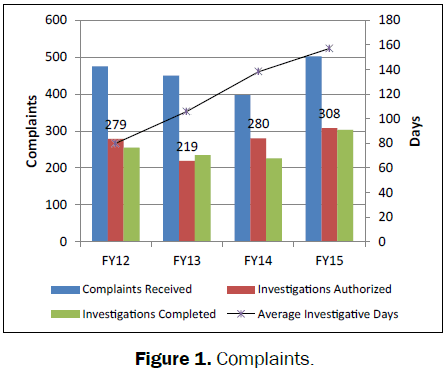 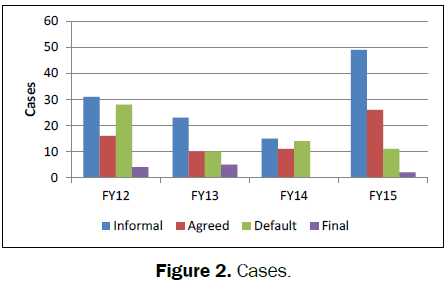 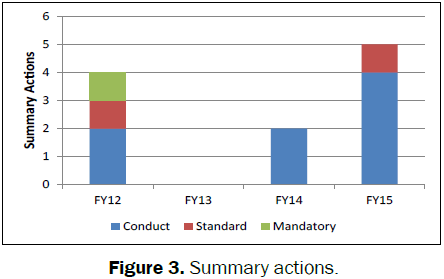 The Complaint Data for 2014

Table 7 shows the raw data provided in the “Pharmacy Type” table. Of note, chain drugstores received 37% of the complaints, with independent practices getting 10% and hospitals receiving 7% of grievances. It should be noted that not all complaints warranted investigation. In fact, the HRSQ document for the 2011-2013 biennium notes that only 13% of the all complaints on all health care providers resulted in discipline [3]. It is not the intent of this paper to tie complaints to any variables.

Pharmacists received the majority of the complaints at 54%, pharmacies at 14%, Non-Resident Pharmacies (PHNR) at 9%, Pharmacy Technicians at 9%, and Pharmacy Assistants at 7%. Sometimes the respondent is unknown until the complaint is investigated.

Patients were mostly likely to file a complaint at 28% with DOH (Department of Health) slightly lower at 26%. It should be noted that the majority of complaints filed by the DOH were on licensees who did not complete their continuing education (CPE) or had misrepresented themselves on their application and received a watch hit on a background check. Other sources of complaints were providers, employers, employees, other Boards and Commissions, peers, and self-report.

Nature of the Complaints

Prescription miss fills resulted in10% of the complaints followed by no continuing education participation at 8%. Of note, there were 9 diversions of controlled substance cases, 7 cases where a licensee failed two consecutive inspections, 6 cases for HIPPA violations, and 6 cases where a pharmacist refused to fill a patient’s prescription. Also of note, there were 17 complaints lodged by the DOH against applicants who misrepresented the legal questions asked on the application resulting in a hit during the background check.

The remainder of the complaints is as follows in alphabetical order (with multiple complaints noted where applicable):

It should be noted that when individuals hold more than one credential, the PQAC may refer a complaint to another Board or Commission if warranted (Tables 7-9).

The Inspection Process for 2014:

Washington State Pharmacy Investigators conduct routine pharmacy inspections to ensure that all pharmacies in the state meet minimum standards of operation and practice as defined by rule and statute. WAC 246-869-190 states, (1) all pharmacies shall be subject to periodic inspections to determine compliance with the laws regulating the practice of pharmacy. (2) Each inspected pharmacy shall receive a classification rating which will depend upon the extent of that pharmacy's compliance with the inspection standards. This fundamental process is used to ensure the safe delivery of medication and services to the public.

This data was collated by the Department of Health Chief Investigator. The de-identified data has been provided. It is meant as a teaching tool only to aide in improving the process for individuals and protection of the citizens of Washington State.

Violations for the year 2014 are listed in the table below. The inspectors, who are registered pharmacists, found that upon inspection of licensees, 35 percent of the violations were due to lack of allergy and chronic medical conditions collected for patients and this information was absent on patient profiles. No authorization for child resistant caps accounted for 9 percent of all violations. And 9 percent of pharmacies were found to have drugs that were outdated. Next, 8 percent of pharmacies had mislabeled drugs with the majority of this violation involving a drug expiration date on the label exceeding the actual expiration date of the drug stock bottle/package and/or incorrect beyond use dates placed on labels of compounded products. The rest of the violations are noted in Table 10 with the corresponding Washington Administrative Code (WAC).

Washington State has been under a rulemaking moratorium since December 2012. Since then, a quorum has been established on the Pharmacy Quality Assurance Commission, and key topics for rule making has begun to update the WACs now in use. The Rules Rewrite Project for Pharmacy has targeted rule writing for compounding sterile products; core functions and licensing standards for pharmacists and interns; pharmacy operations and business practices; technology; and ancillary personnel. New rules may limit the usefulness of the data gathered for this project.

Current Legislation and policy activity since 2014 is listed below

• Engrossed Substitute House Bill 1625, passed in 2014, restricts retailers from selling over-the-counter (OTC) products that contain dextromethorphan (DXM) to persons under eighteen. The law creates civil penalties for selling or purchasing OTC DMX products in violation of the restrictions in the law and preempts local ordinances regulating the sale, distribution, receipt, or possession of DXM. The law does not apply to DXM containing products sold by prescription.

• Substitute House Bill 1625, passed in 2015, allows pharmacies operated by a hospital to provide medication to ambulance and aid services for uses associated with provided emergency medical services. The commission is working with the department of health to develop a model protocol related to the transfer of medications from the hospital pharmacy to the ambulance or aid service.

• Engrossed Substitute House Bill 1671, passed in 2015, increase access to opioid overdose medications to persons at risk or persons in a position to assist a person at risk of experiencing and opioid-related overdoes.

• Engrossed Senate Bill 5268, passed in 2015, allows a pharmacist to dispense one early refill for topical ophthalmic products under conditions defined in law.

• Engrossed Substitute Senate Bill 5460, passed in 2015, establishes standards for dispensing outpatient medications from a hospital emergency department. The law redefines health care entity to include freestanding outpatient surgery centers, residential treatment facilities, and freestanding cardiac care centers that are not otherwise licensed by the state to acquire or possess legend drugs. The law also provides options hospital owned and operated include individual practitioner officer or multipractitioner clinics to be added by application or renewal to the hospital pharmacy license.

• Engrossed Substitute Senate Bill 6052 - (budget proviso- effective June 30, 2015) mandating that the commission engage interested parties and stakeholders in a process for developing statutory standards and protocols for long-term care pharmacies. The commission must draft a letter report with proposed language and submit it to the legislature by November 15, 2015.

The Most Current Rules and Policies are listed below

• The commission adopted rules to amend WAC 246-887-020 and repealed WAC 246-887-030 to clarify the electronic prescription and dispensing requirements for Schedule II through Schedule V controlled substances. These changes make the rules consistent with state and federal law.

• The commission is amending chapter 246-869 WAC, WAC 246-863-060, WAC 246-901-100, -120, and -130. Current rules need to be amended to establish standards for pharmacy business practices as it relates to shared accountability of the pharmacist in charge and the business license holder, quality controls or improvements in error reduction, and quotas and performance metrics on clinical and prescription services. The commission continues to work with stakeholders through the Pharmacy Business Practice Committee.

• In response to a rulemaking petition, the commission is considering amending WAC 246-887-040 and -045 to add Lisdexamfetamine, a Schedule II nonnarcotic stimulant for the treatment of binge eating disorder (BED). Lisdxamfetamine is currently approved by the federal Food and Drug Administration for use in the treatment of BED

• The commission has begun the rulemaking process to amend WAC 246-869-190 related to pharmacy Inspections. The commission plans to consider evaluating the rules on how pharmacy facility inspections are current conducted using a pointsbased system.

• The commission is considering updating WAC 246-860-100 related sexual misconduct rules to include sexual contact that involves force, intimidation, lack of consent, or conviction of a sex offense listed in RCW 9.94A.030. The change in rule will provide clear standards of conduct and assist the commission in comply fully with an Executive Order from former Governor Gregoire.

• The commission has adopted WAC 246-869-105 under the provision for emergency rulemaking to allow pharmacists to provide a temporary prescription refill for patients when the patient’s pharmacy access is disrupted. The intent of the rule is to provide continuity of care during a proclaimed emergency. The emergency rule will remain in effect for 120 days. The commission will begin rulemaking to consider permanent rules in this matter.

With the increased influx of prescriptions and patients due to enactment of the Affordable Care Act, it is incumbent upon pharmacists be qualified, competent and to practice at the highest standards. Examples of these standards include DUR (drug utilization review) evaluation, allergy review, and patient counseling [4]. These processes are linked to improved medication adherence and positive clinical outcomes. It also helps detect and prevent medication errors, and prevent patient harm. In addition, pharmacies must meet a standard of practice for dispensing and distribution.

The ISMP (Institute for Safe Medication Practices) offers a root cause analysis to learn how and why errors occur for further interest in this matter [5].