Sadeghpour A1, Sadighi A1, Pourfeiz HH1, Attar B1* and Azizian Z2

Treatment of pelvic chondrosarcoma is often problematic for the surgeons. The location of the tumor, particularly tumors of the periacetabular region, leads to special surgical difficulties. We report the case of a 48 year old lady who presented to the orthopaedic surgery department complaining of left hip pain and limping. Histopathologic evaluation by open biopsy revealed chondrosarcoma. The acetabulum was completely resected via a 1-stage operation and the hemipelvis allograft was implanted together with a total hip prosthesis. Neither local recurrence nor metastasis was noted after the operation. A satisfactory clinical outcome was achieved at 6 month and 1 year following up and the patient was able to walk with a crutch without pain. Regarding the favorable outcomes similar to previously reported 2 stage operations, one-stage reconstruction can be the best therapeutic option for treatment of malignant pelvic tumors.

Chondrosarcoma is the second most frequent malignant bone tumor, and also displays cartilaginous differentiation. The tumor is most commonly located in pelvic and proximal femur. Symptoms associated with chondrosarcoma include boney bump, swelling, or limited movement and pain [1]. The location of the tumor, particularly tumors of the periacetabular region, leads to special surgical difficulties. Pelvic chondrosarcoma can stay asymptomatic for extended period and therefore it will become large due to delayed diagnosis. Currently, limb salvage surgery has become the most frequently used technique for treatment of chondrosarcoma [1-4]. The functional results are better after internal hemipelvectomy in which the limb is salvaged than after external hemipelvectomy [4]. We present herein a 48 year old woman who had pelvic chondrosarcoma. A hemi pelvis allograft in combination with a total hip prosthesis was used to reconstruct the pelvis in one-stage operation.

A 48 year old female weighting 75 kg, referred to an orthopedic surgeon complaining of left hip and knee pain and limping of 12 months duration. Plain radiography and CT-Scan showed a dysplastic hip with signs of degenerative joint disease and also an osteolytic area in the acetabular roof (Figure 1). Technetium bone scan showed an increased uptake only at the lytic area. Tomography of the chest showed no pulmonary or other sites of metastases. ESR was moderately elevated, leukocyte count and standard blood chemistry were all normal. We performed an open biopsy through an ilio-inguinal approach and based on the pathology report, diagnosis was a conventional type of chondrosarcoma, Grade III.

The operation was performed in Shohada teaching hospital in Tabriz University of Medical Sciences, northwestern Iran. Using a T shaped approach, wide resection was performed and the acetabulum was resected completely including most parts of ischium and pubic ramus and supra-acetabular area together with surrounding soft tissue and also the femoral head. All neurovascular structures were protected and the iliacus muscle was stuck to the resected bone. Then a hemipelvis allograft harvested from a 16 year old brain dead boy, was inserted in the defect area and internally fixed by lag screws and plating. Afterwards, reconstruction was completed by a total hip replacement using a cemented cup and a cementless stem (Figure 2). The scar tissue that forms after the biopsy was excised, as well as part of the iliacus and gluteal muscles. No major vessels or nerves were damaged during this procedure.

Three days after operation the patient was allowed to start walking without weight bearing on the operated limb. Two months later partial weight bearing has begun. A control radiograph at six months after operation showed that the prosthesis was sufficiently stable. We observed no movement between the pelvic prosthesis and the bony pelvis and there were no signs of loosening or fixation failure in comparison to the early postoperative radiograph (Figure 3). 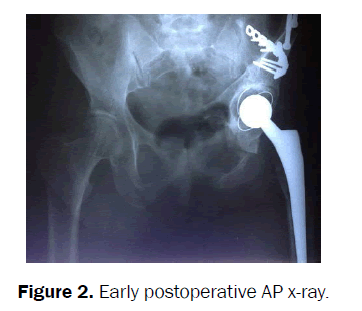 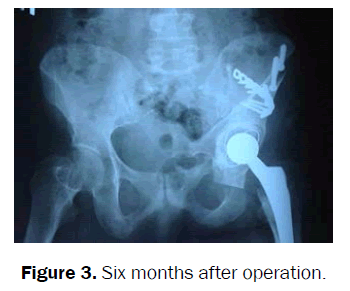 The patient was pain free and she was able to walk with the aid of one crutch at six-months after the surgery. We encountered no allograft fracture at one year after implantation. The gluteal muscles were functional although there were some degrees of weakness in abductor muscles. There were no clinical or radiographic findings regarding the local recurrence or metastasis at one year after surgery. Our patient had no signs of infection. The nonunion did not occur at 18 months after the operation.

Some rational points may be mentioned for the allograft reconstruction. Most pelvic lesions, particularly those of the iliac wing at a distance from the acetabulum, can be easily treated by resection of the iliac wing with or without fusion between the sacrum and the supra-acetabular region [5,6]. However, CT scans and magnetic resonance imaging show that many malignant tumors extend to the acetabulum and even penetrate the joint [7]. Such tumors require en-bloc resection of the joint and its capsule, the pelvi-trochanteric muscles and the iliac wing with its covering gluteus medius, gluteus minimus and iliopsoas. Restoration of function poses difficult problems, and an allograft seems to be one of the possible techniques [8,9].

Hemipelvectomy can be another solution; however, patients underwent hemipelvectomy showed poor functional and clinical outcomes [5]. Major prosthetic replacement causes a high rate of morbidity, because of the difficulty of attachment to the residue of the pelvic ring, and muscle re-attachment is also challenging. Pelvis resection without reconstruction provides only moderate functional results [5,10] as well as pelvi-femoral arthrodesis. The use of an allograft is therefore benefitial [11]. It is not a complex operation; however, excision appears to be the most difficult part [12].

The allograft is regarded as a “prosthesis” which is relatively easy to produce [11,12]. It can be shaped to the required dimensions, fixed in place and combined with a standard hip prosthesis [13]. It offers the advantage of eventual biological union to the neighboring bone and makes muscle re-attachment easier [14]. We observed some degrees of mismatch between the shape of allograft and the host bone. Given that the patient was a 48 year old woman and the donor was a 16-year-old boy, these results were not unexpected.

In conclusion, donor and recipient should be matched, as much as possible, in terms of having the same gender and similar age. Some technical points such as absolute sterility of the allograft, firm fixation using large cancellous screws, preservation of the iliac crest as a pedicle graft and stabilization of the prosthesis must be carefully considered to achieve optimal outcomes. Regarding the favorable outcomes similar to previously reported 2-stage operations, one-stage reconstruction can be the best therapeutic option for treatment of malignant pelvic tumors.

Analysis and interpretation of data: Ali sadighi and Hossein aslani