Rational Use of Drugs in Egypt According to the Standard WHO Prescribing Indicators: Pilot Baseline Situational Analysis

Mansour NO1* and El-Hefnawy ME2

Background: The irrational use of drugs is a major health problem resulting in; reduction in the quality of drug therapy, increasing morbidity and mortality rates, waste of resources, development of antibiotic-resistant organisms, transmission of blood-borne diseases. Objective: The main objective of the present study was to assess health care professionals’ adherence to WHO prescribing indicators in order to identify areas in need for intervention and set recommendations regarding the rational use of medicines. Materials and methods: A sample of 340 prescribing encounter were collected randomly from different health facilities (hospitals, health care centers, community pharmacies) in Egypt. All prescriptions were evaluated for adherence to WHO prescribing indicators and British National Formulary (BNF) prescribing patterns. Results: The average number of drugs prescribed per encounter was 3.14. The results of the present study showed that the mean percentage of drugs prescribed by generic name was 16.07% with a significant difference in practice between different health facilities. The frequency of prescribed antibiotics was 18.97%; the percent of prescribed antibiotic in primary health care centers was 31.97. This study showed that the frequency of prescribed injectable drugs was less than 10%. Recommendations: The study emphasizes the need for incorporation of the rational drug prescribing as an integral part in the national practice guidelines. Furthermore, these results emphasize the critical role of the drug information centers with trained clinical pharmacist in promoting rational use of drugs.

Rational use, WHO, Egypt

The conference of experts convened by the World Health Organization (WHO) defined rational drug use as follows “patients receive medications appropriate to their clinical needs, in doses that meet their individual requirements, for an adequate period of time, and at lowest cost to them and their community” [1]. Common patterns of irrational prescribing maybe manifested in the following forms; polypharmacy, over use of antibiotics, indiscriminate use of injections, poor compliance with clinical practice guidelines [2,3].

The consequences of this irrational use of drugs are enormous and can be seen in many ways such as; reduction in the quality of drug therapy, increasing morbidity and mortality rates and waste of resources. These problems might be exacerbated in Egypt as lower-middle-income country due to limited resources. Moreover, lack of adequate drug use policy, the pluralistic nature with a wide range of health care providers and very little continuing education for health care professionals about the rational use of drugs provoke the need for conducting both quantitative and qualitative drug utilization studies in Egypt [4]. On one hand, Egypt has the highest chronic hepatitis C virus prevalence in the world [5] and, the over use of injectable medications can provoke this enormous problem due to the use of non-sterile injections. On the other hand, the increasing reported irrational use of antibiotics in Egypt might have a massive contribution in the global spread of antimicrobial resistance [6,7].

To the author's knowledge, very little information was available about the nature and extent of prescribing patterns in Egypt, only one study performed in primary health care centers in Alexandria [3].

So the main objective of the present study was to assess health care professionals adherence to certain core drug use indicators in order to identify areas in need for intervention and set recommendations regarding the rational use of medicines, thereby minimizing medication errors and improving therapeutic outcomes. This study will serve as baseline to assess the needed strategies that promotes the rational use of medicine in Egypt.

This is a pilot, retrospective, observational, quantitative drug utilization evaluation study to assess rational use of drugs according to the standard prescribing indicators developed by world health organization in collaboration with international network of rational use of drugs (WHO/INRUD prescribing indicators). In addition, analysis of component of prescription was done according to guidelines of British National Formulary [12].

The study was done in the governorate of Gharbeya, Egypt. A sample of 340 prescribing encounter were collected randomly from different health facilities (private hospitals, health care centers, community pharmacies) over 10 months between February 2016 to December 2016). Encounters were spread at regular intervals throughout the year to minimize the bias due to seasonal variations or interruptions of the drug supply cycle. Data recorded in a special data collection sheet predesigned by the investigators for structured information collection according to WHO guidelines and methodology. The optimal level for each parameter and the optimal percentage of prescriptions component are shown in Tables 1 and 2.

Table 1. The optimal level for standard WHO prescribing indicators.

Data entry and analysis were conducted using SPSS version 19. Descriptive statistics were used in the form of mean, and standard deviation. Differences between health care facilities were measured using an ANOVA test. The statistical significance was determined by a p-value less than 0.05.

Table 4. Distribution of studied prescriptions according to WHO drug use indicators.

Table 5. Distribution of number of drugs per prescription.

Figure 1. Distribution of studied prescriptions according to WHO drug use. 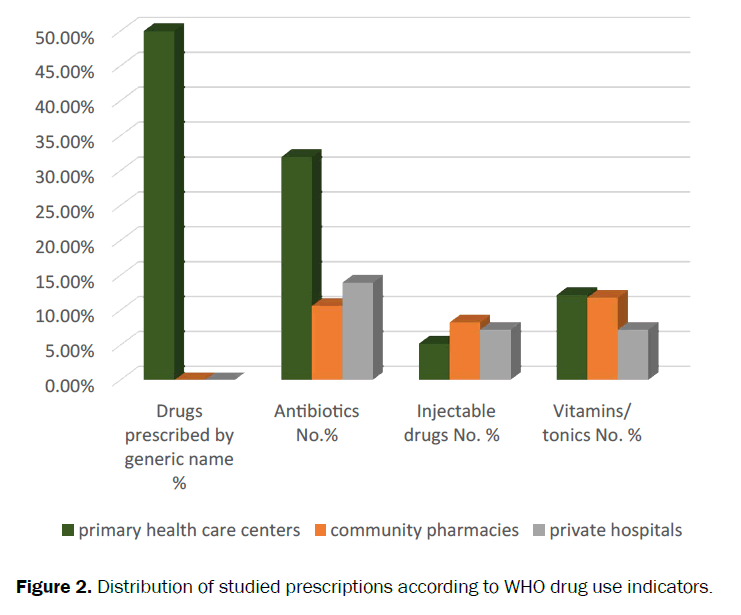 Figure 2. Distribution of studied prescriptions according to WHO drug use indicators.

The results of this pilot study could serve as a baseline situational analysis to identify professional practices and perception towards rational use of medicines in Egypt. This analysis helps in identifying the common causes of irrational use of drugs; which is a prerequisite for planning the needed interventions to promote rational drug use in Egypt [13].

Table 3 shows the results of the prescription audit revealed that critical information such as patient's weight was missed in 99.3% of encounters. In addition, the strength and duration of medications were missed in 33.1, 43.76% of encounters, respectively. Considering that patient's weight is very critical for dose calculation in some patient populations such as pediatric patients, hence, lack of such information hinders the medication review by clinical pharmacists. On the other hand, 100% of prescriptions haven’t any information about the relation of drug intake to meals or instructions regarding drug-use. Also, patients’ contact information was not reported in all encounters. Although, contact information may be documented in the patient’s record, but that does not help the pharmacists if they need to immediately communicate with the patients in case of dispensing error [14].

Our results showed that the average number of drugs prescribed per encounter was 3.14 drugs, more than 67% of prescriptions having ≥ 3 drugs as shown in Figure 1. This value was higher than the acceptable limit of non-polypharmacy recommended by WHO (≤ 2 drugs prescribed per encounter). This result is higher than the average number of drugs per encounter reported in United Arab Emirates, Saudi Arabia [15,16] and comparable to that reported in Bahrain [17,18]. Increasing number of drugs per encounter more likely lead to lack of patients' adherence to the dosage schedules and increased risk of both drug interactions and dispensing errors [19,20]. Moreover, prescribing unnecessary medications to patients has cost implications for national health system. Rational prescribing is advocated to avoid wastage of medicines and to avoid possible adverse effects to patients.

Prescription under generic name has been shown to rationalize the drug use, improve the inventory control and reduce the economic burden on the patients [21]. The results of the present study showed that the mean percentage of drugs prescribed by generic name was 16.07%. Obviously, it was extremely lower than the optimal value recommended by WHO for generic prescribing. The percentage of drugs prescribed by the generic name in primary health care centers in this study was 50% (Figure 2). Such number is far less than result of previously conducted study in primary health care centers in Alexandria, where generic prescribing was 95.4%. On the contrary, results were compatible with findings of studies previously conducted in Bahrain, Kuwait, where the value of generic prescribing was 14.3, 17.7%, respectively [17,18]. Moreover, the difference in generic prescribing between different health care facilities was statistically significant, prescribing of drugs by their proprietary names was found in 100% of encounters of community pharmacies and university hospitals. The absence of generic prescribing in hospitals is compatible with results previously reported in similar health care setting in Egypt [6]. This may be attributed to the very effective drug promotional activities that target physicians. Educational circulars and programs on prescribing generic drugs are needed. This can be enforced through introducing such concepts of rational prescribing in curriculum of medical schools.

The irrational use of antibiotics threats the health of populations worldwide. Results of the present study revealed that the average percentage of prescribed antibiotics was 18.97%. This average was compatible with the optimal values recommended by WHO (Table 4). Statistically significant difference in antibiotic prescribing patterns between different health care facilities included in the study was reported. Results of antibiotic prescribing in primary health care centers were comparable with optimal value recommended by WHO (≤ 30%) and with results of study previously conducted in Egypt [4].

The increased usage of injectable drugs is associated with increased risk of transmission of blood-borne diseases [22]. This issue is extremely important in countries endemic with chronic HCV viral infection. Injections were prescribed in 6.82% of encounters on average, which was within the optimal limit proposed by WHO (≤ 10%); none of the health care facilities exceeded cut off edge and similar practice patterns were observed in different health care facilities (Table 5). These results were compatible with findings of studies previously conducted in Bahrain, Kuwait; where the use of injectable drugs was 8.3, 9.1%, respectively [17,18].

This study was limited in that; it was not designed to reveal the reasons leading to irrational prescribing of drugs. Also, this study was done on a relatively small sample size; hence, it may not be representative for the whole population. Nevertheless, the study highlighted the need to more qualitative drug utilization evaluation studies in Egypt.

There is a great concern of completing all patient information on the issued prescription. This will ease the process of medication review by the pharmacists. Prescribers in all health facilities should be advised to use the generic prescribing as well as prescribe the lowest number of drugs needed whenever possible. Antibiotics should be prescribed with care. The Egyptian ministry of health and population should provide continuous medical education targeting health care professionals by organizing training sessions and workshops to discuss aspects of rational drug use. The necessity of developing standard treatment protocols for common medical conditions is clearly obvious. Also, our results emphasize the critical role of the drug information centers with trained clinical pharmacist in promoting rational use of drugs.