Removal of Metal Ions from Aqueous Solutions by Polymer-Assisted Ultrafiltration Ultrafiltration is a membrane process used in various industries, from drinking to wastewater treatment. In nuclear research and energy, ultrafiltration removes actinoids in colloidal or pseudo-colloidal form from wastewater. The study aimed to determine the possible use of ultrafiltration to remove dissolved metals, specifically iron and aluminium, from a solution using polyacrylic acid as an organic polymer. Three solutions were tested containing the metals of interest and boric acid, which is standardly present in the liquid nuclear waste at the LVR-15 reactor. The results showed that a well-chosen combination of ultrafiltration membrane, pH and organic polymer Al3+ and Fe3+ could be successfully removed from the solution.

Several studies about the treatment of radioactive waste using ultrafiltration have been published. In most cases, ultrafiltration happens after the addition of a chemical substance. These methods use surface-active substances, so-called Micellar Enhanced Ultrafiltration (MEUF) or polymerisation agents in the case of seeded ultrafiltration/Polymer-Assisted Ultrafiltration (PAUF). In the case of the first variation, the use of Sodium Dodecyl Sulphate (SDS) as a surface-active substance was described [2]. SDS was added to the processed solution, and after several hours of mixing, this solution was subsequently purified through a membrane. The highest retention of radioactive metals was achieved in pH 8-11 when most radioactive metals apart from Cs ions were almost completely removed.

In the case of PAUF, which involved the use of reagents such as Polyethyleneimine (PEI) and Microcrystalline Chitosan (MCH) for radionuclides Co-60 and Cr-51 [3]. The process is similar to MEUF–addition of a reagent, mixing, reaction and subsequent filtration through a membrane. The decontamination factors were 52 to 68 for the laboratory apparatus and 37 to 62 for the pilot unit, respectively. In addition to PEI, Polyacrylic Acid (PAA) to remove Co-60 and Sr-90 through a regenerated cellulose membrane was described [4]. Retention reached values comparable to low-pressure RO. The use of PEI was also tested for the removal of Cu, Ni and Zn in combination with a cellulose acetate membrane [5]. Metal retention increased with increasing pH and decreased slightly in the presence of salts (NaCl, K2SO4). The above reagents did not significantly remove Cs-137. Copper Hexacyanoferrate (CuFC) at alkaline pH and Nickel Hexacyanoferrate (NiFC) in combination with a composite ultrafiltration membrane were used to remove Cs-137 from the solution [3,6]. An increase in Cs retention by the addition of SDS together with NiFC. The tests in the study took place with real liquid Radioactive Waste (RAW) [7]. The solution contained Co-60, Zn-65, Ba-133, Cs-134, Cs-137, Eu-152 and Am-241. Ultrafiltration was carried out through a ceramic membrane, and the reagents used were sodium salt of Polyacrylic Acid (NaPAA), reagent INSTAR AS (copolymer of macromolecular acrylamide and Sodium Polyacrylate) and Cobalt Hexacyanoferrate (CoCF). RAW processing was carried out similarly as in the above examples. According to the study, the best results were achieved with a combination of all three listed agents. In experiments with a real RAW solution were carried out, ultrafiltration was performed using a ceramic membrane and NaPAA and CoCF reagents [8]. This study found a reduction in decontamination factors when both agents were added simultaneously. A two-phase system was proposed, In the first phase, CoCF will be added, followed by filtration through the membrane. In the second phase, NaPAA will be added to the obtained permeate and filtrate again through the membrane.

The research infrastructure of the Research Center Rez, the LVR-15 reactor, produces various types of liquid waste (different compositions of radionuclides, the content of organic substances, etc.). The spectrum of waste ranges from pure water to saline solutions containing boric acid, iron, and aluminium. Water purification is complicated because it contains radionuclides, making it difficult to manage these wastes. For this reason, it is ideal to use ultrafiltration, during which all unwanted substances are concentrated in one stream and purified water in the other stream (in the case of crossflow) or simple filtration with occasional flushing of the membrane (in the case of dead-end). This work aimed to test the possibility of using a PAUF to remove iron and aluminium ions from the simulated liquid radioactive waste.

Non-active aqueous solution simulating feed waste contained boric acid (1 g/l), Fe3+ (1 mg/l) as ferric nitrate nonahydrate (Fisher Chemical) and Al3+ (1 mg/l) as aluminium nitrate nonahydrate (Fisher Chemical). Potassium hydroxide (Lachner) was used to adjust the pH, and Polyacrylic Acid PAA (Sigma Aldrich) with a molecular weight (Mw) of 100 000 and 250 000 was used as an organic polymer. All chemicals were in analytical grade. A set amount of PAA was added to the tested solution to obtain a PAA to M3+ ratio ranging between 5 to 50.

The experiments were performed using an ultrafiltration laboratory unit for testing flat sheet membranes consisting of a high-pressure pump and a filtration chamber (Figure 1). After the addition of PAA, the tested solution was stirred for 30 minutes at a stirring speed of 100 rpm using a magnetic stirrer (IKA) and then left to react for another 60 minutes. A pre-dried and weighed polysulfone membrane GHPS Media 0.02 A Micron 47 MM disc (Filtration group) was used. The flow rate through the unit was set to 20 ml/min, and the operating temperature was 22 ± 2ºC. Three solutions were tested; one consisted of boric acid and Fe3+, the second with boric acid and Al3+ and the last with boric acid and both trivalent metals. Each experimental solution was tested at both alkaline and acidic pH. Feed waste solution and permeate samples were collected to analyse the metal content, pH and conductivity.

The conductivity and pH values in all solutions were measured using a WTW pH/Cond 3320 (Xylem Analytics, Germany).

The removal efficiency of each metal was calculated as follows: Aluminium was removed by this method at acidic pH only at a lower organic polymer-to-metal ratio, namely 12% and 36% when using PAA Mw 100 000 and Mw 250 000, respectively. As the ratio increased, Al3+ was no longer removed from the solution. A similar situation occurred with PAA Mw 250 000 additions in an alkaline environment where the efficiency of removing Al3+ decreased with increasing PAA: Al3+ ratio from 14% to zero values. When PAA Mw 100 000 was used, the decrease in ion removal efficiency was not so significant. Still, the highest values were at 18% and decreased with increasing PAA to metal ratio to the value of 7%. The metal removal efficiency as a function of the PAA: Al3+ ratio in the PAUF system in both acidic and alkaline conditions is shown in Figure 3. Removal of both ferric and aluminium ions 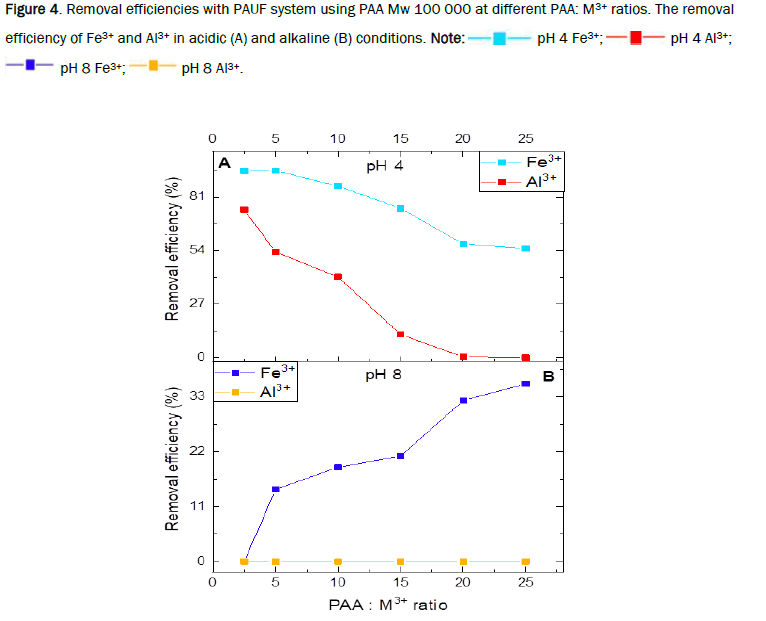 Figure 4: Removal efficiencies with PAUF system using PAA Mw 100 000 at different PAA: M3+ ratios. The removal efficiency of Fe3+ and Al3+ in acidic (A) and alkaline (B) conditions. Note:

Simultaneous removal of both metal ions was tested with PAA of Mw 250 000 to compare the effect of different molecular weights of organic polymer. In the acidic environment, the removal efficiency of Fe3+ and Al3+ from the solution reached a maximum value of 96% and 89%, respectively, at a lower PAA: M3+ ratio. The values then decreased with more PAA added to the solution. Comparing the molecular weights of PAA, the results were similar to those using Mw 100 000, where the removal efficiencies were slightly lower than when using Mw 250 000. The presence of Fe3+ enhanced the rejection of Al3+ from 37% in a single metal solution to 89% at the lower PAA: M3+ ratio. Correspondingly, the presence of Al3+ in the solution positively affected Fe3+ removal at pH 4. The highest value of removal efficiency was 16% without the presence of Al3+ compared to 96% with it.

In the alkaline environment, high rejection of Fe3+ (90%) occurred at the ratios from 5 and 10 and then decreased. The overall removal efficiency of Fe3+ was slightly lower in the presence of another metal. On the contrary, like previous tests, the presence of Fe3+ positively influenced the removal of Al3+ at 58% compared to 14%. The trend of the removal efficiency of Fe3+ and Al3+ from the solution using the combination of ultrafiltration and PAA at different PAA: M3+ ratios and different pH is shown in Figure 5. Figure 5: Removal efficiencies with PAUF system using PAA Mw 250 000 at different PAA: M3+ ratios. The removal efficiency of Fe3+ and Al3+ in acidic (A) and alkaline (B) conditions. Note:

The influence of an added organic polymer in the PAUF system on metal removal using a polysulfone flat-sheet ultrafiltration membrane was investigated. Three solutions were tested, one with Fe3+, the second with Al3+ and the third with both. Boric acid was present in all solutions and PAA was used as an organic polymer in two different molecular weights. The results with the simulated wastewater indicate that a well-chosen combination of ultrafiltration membrane, a dose of organic polymer and pH, Al3+ and Fe3+, can be successfully removed from the boric acid solution.

The Fe3+ had an overall higher removal efficiency compared to Al3+. The removal rate of Fe3+ reached 95% in the alkaline environment for both tested molecular weights of PAA. In contrast, this method only removed Al3+ from the single metal solution to a limited extent, with a maximum removal efficiency of 37% at pH 4. Comparing the effect of pH on the single metal solution, the removal efficiency was generally higher in alkaline conditions for Fe3+. However, the simultaneous removal of both Fe3+ and Al3+ from the solution was more successful at pH 4 for both metals. In most cases, a negative influence of a higher PAA: M3+ ratio on the removal efficiency was observed. Therefore, it is essential to carefully determine the amount of PAA used for the best results.

It can be stated that the presence of Fe3+ in the solution had a positive effect on Al3+ rejection at pH 4 in the case of both types of PAA. Considering the influence of molecular weights of used PAA, the results were similar in the mixed metal solution, where the removal efficiencies were slightly lower using PAA Mw 100 000 than when using Mw 250 000.

The presented results were realised with the Institutional Support of the Ministry of Industry and Trade.