Nickel plays an important role in metallurgical, electroplating and other chemical industries. About 40% of the nickel produced is used in steel factories, nickel batteries and in the production of some alloys. On the other hand, it may pollute aqueous streams, arising therefore several environmental problems. Azaridachta indica seed shells were evaluated for Ni (II) adsorption. The tests were performed in batch equilibration method. The obtained maximum adsorption capacities were 66.66 mgg-1. The FT-IR results showed that the sorbent have different functional groups responsible for nickel ions binding, such as carboxyl, amino, peptide and hydroxide. The morphology of adsorbent surface was analyzed by scanning electron microscopy (SEM) before and after Ni(II) loading.

Adsorption process offers the advantages of low operating costs, possibility of metal recovery, potential biosorbent regeneration, though research has been carried out for developing cost effective heavy metal removal techniques. The use of agricultural plant materials and their waste products viz., papaya wood [1],capsicum annum seeds [2] , cork biomass [3], tea industry waste [40] , grape stalk wastes [5] have been widely increased in the recent past , as these byproducts does not possess commercial value in agricultural sector. Previous work has shown that the leaf powder of Azaridachta indica has an excellent ability in removing metal ion such as Cr(VI) from aqueous solutions [6,7] . The Nickel element is present in aqueous solutions mainly in the divalent states. Nickel is released into the environment by a large number of processes such as electroplating, polishing, batteries [8] manufacturing, mining, metal finishing, paints, pigments, forging etc. Due to the toxic effects of nickel, it is necessary to eliminate it from the contaminated effluents. The aim of this work is to evaluate the viability of the acid- alkali pre-treated seed shell of Azaridachta indica to remove of Ni (II) from aqueous solution. Equilibrium and kinetic experiments were performed. The Langmuir isotherm model was applied to experimental data. The pseudo-first, pseudo-second-and intra-particle diffusion models were used to fit the kinetic data. The changes in functional groups were analyzed by spectroscopy in the infrared region (FT-IR). 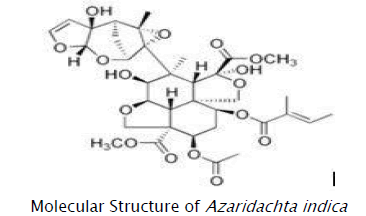 Neem tree botanically known as Azadirachta indica, belong to the family Meliaceae. The tree is tall, fast growing and is known for its drought resistance [9]. The fruits are green and yellow when ripe and are yielded around 37-55 kg per tree. It is a smooth olive-like drupe which varies in shape from elongate oval to nearly roundish. The white, hard inner shell of the fruit known as the seed shells (endocarp) were collected from fertilizer manufacturing units in Coimbatore. Neem seed shell husk were thoroughly washed well with double distilled water and dried in the air. The dried shells were powdered, sieved and fractions measuring from 0.18 to 0.71 mm were treated first by boiling in 0.1 N HCl for three hours. After decanting the solution, the residue was allowed to boil with 0.1 N NaOH for three hours. Similar treatment processes were reported by A.L.Ahmad et al. and Isabel Vellaescusa et al., [10,11] The treated sorbent of varying sieve sizes were washed well several times with double distilled water, dried and used for further experiments.

The surface morphology of Azaridachta indica seed shell was observed using scanning electron microscope (SEM). After drying, the samples were covered with a thin layer of platinum (10 nm) using a sputter coater (SCD 0050 – Baltec, Liechenstein) and observed using the JEOL JFM-6390 scanning electron microscope (20 kV) under vacuum of 1.33 x 10-6 mBar (Jeol, Japan). To determine the chemical composition, energy dispersive X-ray spectroscopy was performed on adsorbent before and after nickel adsorption. The samples were prepared as for SEM analysis.

Ni2+solutions were prepared from sulphate salts of Nickel [Ni(NH4)2SO4.9H20]. The concentration of metal ions were determined by atomic absorption spectrometry (Perkin Elmer AA Analyst 100 with air-acetylene oxidizing flame). During the reaction process the pH was maintained constant at 8.1 throughout the experiment. Adsorption experiments were performed in continuously stirred beakers containing 50 mL of 11 mg L–1 heavy metals solution (150 rpm) and 150 mg adsorbent, at 30 °C. The models of pseudo-first order, pseudo-second order and intra-particle diffusion were used to fit the experimental data. The equations are represented as follow, then Eq. (1), Eq. (2) and Eq. (3), respectively:

where: q represents the amount of adsorbate retained in the solid at equilibrium, qt represents the amount of adsorbate retained at time t, k1, k2 , kp are the rate constants of the reaction of pseudo-first order [min-1], pseudo- second order [g(mg min-1)] and intraparticle diffusion mg(g-1 min1/2)-. For equilibrium studies the concentrations of nickel solutions varied from 3 to 13 mg L–1 and the amount of biosorbent used was 150 mg L–1. These results were adjusted to the Langmuir model that can be expressed as:

FT-IR spectroscopy was used to confirm the presence of the functional groups in samples and to observe the chemical modification after chromium biosorption. Infrared spectra were recorded in the 4000-600 cm-1 region using a Thermo Nicolet instrument, model IR-200. The ATR (attenuated total reflection) device allows getting information about the surface.

The morphology of L. minor surface was analyzed by scanning electron microscopy (SEM) adsorbent before and after nickel loading (Figure 1a &1b).

Figure 1a &1b: SEM analysis of A.indica seed shell powder before and after Ni(II) loading

The SEM analysis of the treated adsorbent showed the rugosity surface with microstructures, as illustrate Figure 1 (a). This rugosity can be assigned to the presence of niacin,proline, glutamic acid, aspartic acid, glutamine, tyrosine and alanine which contain polar groups like –NH2, - COOH, -OH etc. in A.indica sed shell powder (Battacharya and Sharma, 2004; Neem foundation, http://www.neemfoundation.org, 1997) [7] contribute to the negative surface charge. This rugosity is less obvious after the Ni(II) loading (Figure 1b). According to EDX analysis, the ions initially present in the seed shell, such as phosphorus, calcium, iron etc. [12] are removed during the Nickel sorption process (Figure 2b).

Figure 2a &2b: EDX analysis of A.indica seed shell powder before and after Ni(II) loading Langmuir isotherm and Freundlich isotherm model were used to fit the experimental data. The results are shown in Figure 4a and 4b .Langmuir parameters obtained were qmax of 66.66mg g-1, b of 0.1666 L mg-1 and R2 of 0.9967. The maximum amount adsorbed on a monolayer is represented by qmax, and b is the Langmuir association constant, which is related to the adsorption energy. The apparent Langmuir constant (b) is a measure of stability for the complex formed between metal ions and adsorptive surface layer of adsorbent under specified experimental conditions. For example, a small “b” value indicates that the metal ion has a high binding affinity with the adsorbent. From table 1 it could be understood that Langmuir model fited the experimental data as compared to Freundlich model. The values of b and qmax indicate that A.indica seed shell powder have affinity for Ni (II). Figure 5a and 5b presents Ni(II) ion kinetic curves adjusted with the pseudo-first-order and pseudo-second-order models. Linear correlation coefficients and pseudo-first-order (k1) and second-order (k2) constants, as well as the equilibrium capacity obtained, are shown in Table 1. The value of correlation coefficient R2 is relatively high (>0.99) for Pseudo first order when compared to pseudo second order. Therefore, it can be concluded that the Lagregren model best describe the biosorption kinetics of metals over A.indica seed shell powder.

Figure 5a &5b: Pseudo-firstorder and pseudo-second-order kinetic models for Ni2+ adsorption.

affinity for Ni(II) as obtained from Langmuir model . The value of correlation coefficient R2 is relativelyhigh. Therefore, it can be concluded that the Lagregren model describe the biosorption kinetics of metals over A.indica seed shell powder.