Studies on the Production of (E,E)-geranyllinalool in E. coli

4These authors contributed equally to this work.

Geranyllinalool (GL) is a linear diterpene with special fragrance, and widely used in decorative cosmetics and detergents [1]. In various plant species, including Arabidopsis thaliana, geranyllinalool is reported as a possible insect pheromone attracting herbivore predators [2]. Geranyllinalool is also used pharmacy as an intermediate of several drugs such as teprenone.

(E)-nerolidol is usually used as a precursor for chemical synthesis of (E,E)-geranyllinalool through eight steps of reactions, including protecting functional groups, oxidizing reaction, and halogenating reaction, etc. However, these complicated processes limit the yield of (E,E)-geranyllinalool synthesize chemically [3]. There is a possibility to produce (E,E)-geranyllinalool through the metabolic engineering approach, using specially engineered microorganisms. Only a few (E,E)-geranyllinalool synthase (GES) genes including AtGES [4] in A. thaliana, MtTPS3 [5] in Medicago truncatula, and PITPS2 [6] in Phaseolus lunata have been cloned and characterized. In plants, (E,E)-geranyllinalool is formed from (E,E,E)-geranylgeranyl diphosphate (GGPP) by GES, while geranylgeranyl diphosphate synthase (GGPPS) catalyzes isopentenyl diphosphate (IPP) and dimethylallyl diphosphate (DMAPP) precursors to form GGPP [7]. IPP and DMAPP can be interconverted by isopentenyl diphosphate isomerase (IDI) to balance their usage in the production of long chain isoprenoid precursors [8]. The methyl erythritol phosphate (MEP) pathway in prokaryotic bacteria and plant plastid can lead to IPP [9], the yield of which is controlled by two rate-limiting enzymes, 1-deoxy-D-xylulose-5- phosphatesynthase (DXS) and 1-deoxy-D-xylulose-5-phosphate reductase (DXR) [10]. The truncated E.coli gene idi, dxr and dxs were inserted into pCDFDuet vector to construct the recombinant plasmid pIRS and successfully improved the yield of IPP and DMAPP [11]. Furthermore, GGPPS also was expressed in E.coli to provide the GGPP precursor for diterpene production in metabolic engineering, in which one plasmid, pGG, containing the truncated Abies grandis GGPPS gene, was successfully constructed [12].

Materials and reagents: The Columbia (Col-0) ecotype of Arabidopsis thaliana was obtained from State Key Laboratory of Tree Genetics and Breeding in Chinese Academy of Forestry. They were grown in soil in a growth chamber at 18°C for 6 weeks under long-day condition (16-h-light/8-h-dark photoperiod). The A. thaliana was treated by 100 μM methyl jasmonate (MeJA) for 12 h. The leaves were harvested from the treated seedling and were immediately frozen in liquid nitrogen for the RNA extraction and subsequent analysis. The plasmids pIRS and pGG were obtained from Professor Reuben J. Peters (Iowa State University).

Constructing and expressing the (E,E)-geranyllinalool fermentation engineering strain: All three plasmids containing 0.5 μg plasmid DNA, pIRS, pGG and pET30a-AtGES (or pET30a(+)), were co-transformed into E. coli BL21 (DE3) (CWBIO, Beijing) and E. coli C41 (DE3) from Professor Qiang Wang (Sichuan Agricultural University). The resulting recombinant strains were grown under selective conditions using the antibiotics, chloramphenicol, spectinomycin, and kanamycin at concentrations of 34 μg/ mL, 50 μg/mL, and 50 μg/mL respectively. Expression was initiated from a clone confirmed by sequencing and the clone was inoculated into 60 mL liquid TB media according to the method reported by Morrone et al [11]. For both the shake flasks cultures, initial growth to log phase was carried out at 37°C (OD600~0.6). Then the culture was transferred to 18°C shaker, and 6 mL phosphate buffer and 660 μL 50% glycerol were added. Shaking was held at 200 rpm, and the cultures was induced by addition of 0.2 mM isopropy-β-D-thiogalactoside (IPTG) with continue growth for 48 h [11].

10 mL culture was centrifuged at 8000 rpm/min for 8 min, and got the bacterium precipitate, which was resuspended with 2 mL Bacterial Protein Extraction Kit (CWBIO, Beijing), and centrifuged after being incubated at 37°C for 3 h. The supernatant was collected for SDS-PAGE to analyze AtGES recombinant expression.

GC-MS analysis and quantification of products: The remaining 50 mL culture was extracted using 50 mL hexane (Fisher) for 8 h, and then extracted further with ultrasonic for 10 min. The hexane extract was concentrated to 1mL by a gentle flow of nitrogen gas prior to GC-MS. For GC-MS analyses, all samples were analyzed on an Agilent 7890A gas chromatograph equipped with a Agilent 5975C mass selective detector and a HP-5MS capillary column (30M × 250 μm ID × 0.25 μm film thickness). 1 μL sample was injected with splitless mode, and was carried by helium gas with 1 mL/min flow rate. The samples were analyzed with the following temperature program: 80°C for 2 min, followed by a 10°C/min ramp to 210°C, and then 3°C/min ramp to 240°C. Injector and MS quadrupole detector temperatures were 250°C and 150°C, respectively. The standard curve was made using the (E,E)-geranyllinalool standard with the different concentrations, 100 μg/mL, 50 μg/mL, 25 μg/mL, 12.5 μg/mL, and 6.25 μg/mL. (E,E)-geranyllinalool standard was purchased from Sigma (Beijing, China).

Constructing prokaryotic expression vector of AtGES: The ORF of AtGES gene was 2634 bp (Figure 1), which was amplified and inserted into pET30a(+) vector through restriction digestion using Nde I and Xho I. The recombinant construct was transformed into DH5α to get the recombinant plasmid pET30a-AtGES and confirmed by sequencing. 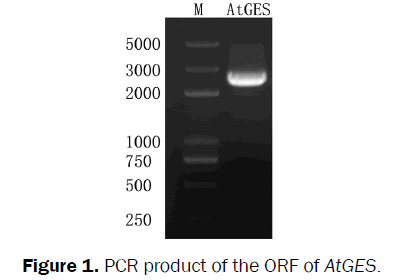 Figure 1: PCR product of the ORF of AtGES.

Analysis of fused protein: AtGES was expressed in E.coli through transformation of pET30a-AtGES into E. coli BL21 (DE3) and E. coli C41 (DE3), and the empty vector of pET30a(+) was used as negative control. SDS-PAGE analysis showed that AtGES successfully expressed in E. coli as recombinant protein with about 104 kD molecular weight (MW), which is in accord with predicted MW (Figure 2). 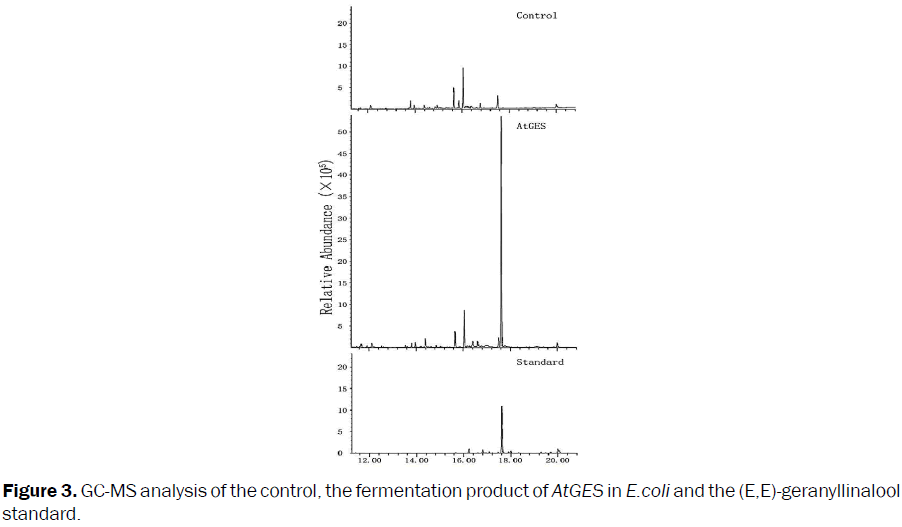 Figure 3: GC-MS analysis of the control, the fermentation product of AtGES in E.coli and the (E,E)-geranyllinalool standard. 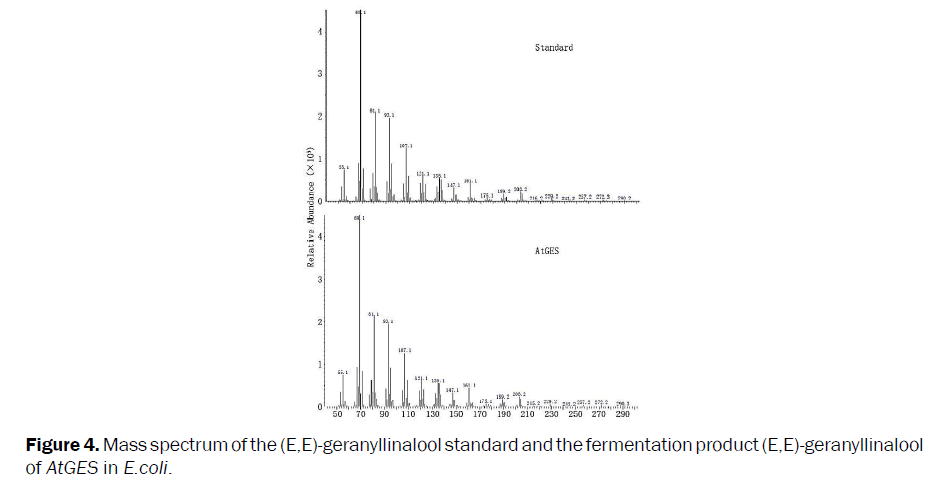 In this study, we made the recombinant expression construct of AtGES and successfully expressed it in E. coli strain. Coexpression pET30a-ATGES with pIRS and pGG harboring upstream gene to provide precursor of (E,E)-geranyllinalool resulted in a good yield of (E,E)-geranyllinalool in the E. coli BL21 engineering strain (3.74 mg/L). Optimization using E. coli C41 strain, increased the yield to 31.42 mg/L, which indicated the potential for further improvement of yield, such as incorporation of mevalonate (MVA) pathway and precursor feeding. With further optimization, our expression system may provide sufficient yields for commercial synthesis of (E,E)-geranyllinalool in a bioreactor in the near future.

This work was supported by the Basic Research Fund of RIF (RIF2014-01).