Systematic Approach for the Bonding in Ferrocene.

Through the systematic LCAO combinations of each of same symmetric 5 group MO’s on upper and lower C5H5 rings, LGO’s are formed. Then considering the symmetries of the lobes below the upper ring and that of the lobes above the lower ring, when both the rings are either partitioned by the nodal planes in possible geographical regions or not, and simultaneously taking the co-ordinate system, it is clear that which orbital on Fe(II) will be suitable for which LGO one for chemical combination.

In my B.Sc. (Honours) class room, during the teaching of bonding in ferrocene, very often I receive the question from the desk of the students that they find difficulties to find out the suitable orbital(s) on Fe(II) metal ion towards chemical combination with a particular ligand group orbital (LGO). The difficulties lead me to clarify the matter from the students’ corner where, along with the consideration of co-ordinate system, I have invoked the simple LCAO concept which is well known to the student.

The Fe atom in ferrocene is normally assigned to the +2 oxidation state as can be shown on the basis of Mossbauer spectroscopy. Each C5H5 (Cp) ring is then allocated a single –ve charge, bringing the numbers of electrons on each ring to six and thus making them aromatic.

Conceptual understanding of theory of non-classical chemical bonding in ferrocene consists of three steps: Step-1: Formation of 5 group MOs in each C5 H5 part of the molecule. (“ refers corresponding to the other C5H5 part.) 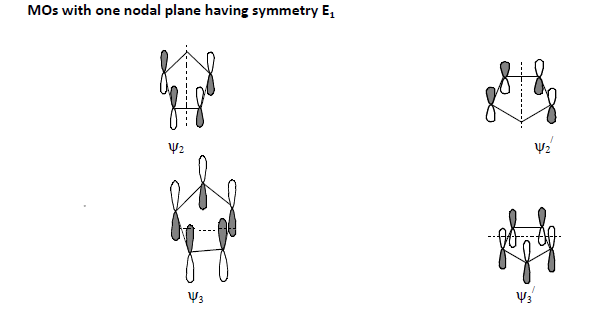 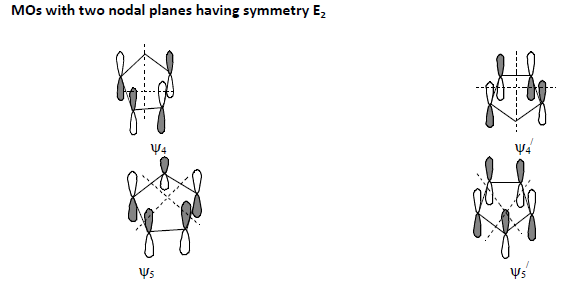 Step-2: Linear combination of those 5 group MOs of one C5 H5 part with a similar set from the other C5H5 part before combining with metal orbitals leading to the formation of 10 ligand group orbitals (LGO’s).

(For creation of –ve of any wave function, say, –Ψ1 /, it must be multiplied by –ve leading to the creation of reverse phase)

Step–3: Combination of those LGO’s with symmetry matched atomic orbitals on the metal ion to form the MO’s.

The main problem of the students arises from the portion that deals with the interaction between the symmetry matched orbitals on the metal ion and the LGO’s regarding which LGO will interact with which metal orbital and how one can find it out. The present topic mainly goes to the clarification for that portion. In this regard students should keep into their minds the following points:

1. When any nodal plane is absent, then the symmetry of the p-orbital lobes below the upper ring and that of the lobes above the lower ring are to be considered.

2. In the presence of nodal plane(s), the partitioning of two Cp rings in both the upper and lower halves altogether into geographical regions will be done according to the nature of occurrence of the nodal plane(s).

3. After that, the symmetry of the p-orbital lobes below the

4. upper ring and that of the lobes above the lower ring are to be considered for those partitioned regions only.

5. They must note that for partitioned regions, only concerned matter is the upper and lower same symmetric zones created by the suitable lobes of the orbitals but it is to be erased from their minds that how many orbitals are there in those regions.

6. Now, taking care of the co-ordinate system and from the symmetry of the concerned lobes it will be clear that which metal orbital will be suitable for a particular LGO. Thus, the ways of obtaining the suitable metal orbital(s) for each LGO are shown as follows: Finally, it is an important notification to the students that FOR EASY VISUALIZATION TOWARDS THE FINDING OF MATCHING ORBITAL(S) ON Fe(II), THEY MUST CONSIDER THE UPPER-LOWER COUPLE, i.e., UX–LX PAIR WHERE “X” STANDS FOR R,L,R/,F,R/R,R/L,FR AND FL DEPENDING ON THE SYMMETRY ZONES CREATED BY NODAL PLANE(S). R ,R/,L,F ARE DEFINED EARLIER.

Though the MO diagram will be found in any of the standard text books, 1-3 still it is shown here for the at a glance study of the present topic.

Though the MO diagram will be found in any of the standard text books, 1-3 still it is shown here for the at a glance study of the present topic. The only energetically well matched orbitals on Cp and metal are E1g’s. Thus the Cp – Mπ interaction through the drifting of electron density from Cp to M leads to the most of the stabilization to form the stable ferrocene molecule.

Systematic LCAO combinations from each of 5 group MO’s having same symmetry on both the upper and lower C5H5 rings lead to the formation of LGO’s. Then consideration of the symmetries of the lobes below the upper ring and that of the lobes above the lower ring where, both the rings are either partitioned by the nodal planes in possible geographical regions or not, and along with the taking up the co-ordinate system into careful consideration make it clear that which Fe (II) metal ion orbital will be suitable for a particular LGO for chemical combination.