Humic substance (HS) as one of the most complex compounds in the composting has very important effect on improving soil fertility, complexing heavy metal and other environment remediation [1-3]. During composting, organic matter is decomposed and transformed by microorganisms to form HS precursors [4]. These precursors are polymerized in various ways, including lignin-protein pathways, polyphenols pathways and maillard reactions, to form HS [5,6]. The polyphenols, carboxyl, amino acids, reducing sugars and polysaccharide are regarded as the typical precursors to synthetize HS [7].

The formation of HS precursors can be divided into two aspects: decomposition and synthesis [6]. The microorganism can release the precursors when the organic matter is degraded to satisfy its growth. As the growth of microorganisms, they began to synthesize precursors by the shikimic acid and malonic acid pathway. The precursors are polymerized under the action of enzymes to form HS. Therefore, the formation of precursors is inseparable from the action of microorganisms. Composting process is facilitated by microorganisms through community succession and abundance changes [8,9]. At the beginning of composting, microbes drastically degrade organic matter to meet their metabolism and production, resulting in the intensely increased temperature. This process may lead to the accumulation of small molecular precursors. Furthermore, the microbial community structure will change with the heating temperature. At the thermophilic stage, composting material mainly dominant by thermophilic microorganisms to degrade recalcitrant materials [10]. Then, the composting temperature gradually goes down due to the microbial activity slows down and the organic matter stabilizes [11]. The rapid community succession is the main reason for precursor’s formation. In addition, the bacteria are very important microbial populations that exist throughout the composting period [9]. Meanwhile, the key bacteria communities that influence the formation and polymerization of HS precursors have been investigated by Wu et al. [7]. However, it is obscure about the specific period of the precursor’s formation and polymerization during different materials composting.

Among the microorganisms, the bacteria maintain the most abundant species and metabolically active [6]. Therefore, this paper mainly studies the effect of bacteria on the formation and polymerization of HS precursors during different materials composting. In this article, the effects of bacteria derived from different composting periods on the formation and polymerization of HS precursors are investigated based on the previous study of Wu et al. [7]. The differences among various materials composting have also been explored. Accordingly, this research provides a staging regulation method to promote HS formation, which will applicable to various types of composting materials.

Five solid piles of cabbage waste (CW), lawn waste (LW), chicken manure (CM), garden waste (GW) and corn straw (CS) were conducted in the compost reactor and the changes in temperature of the composting reactor were proposed by Zhao et al. [12]. The basic properties of the raw materials have been reported by Wu et al. [7]. Before composting, the initial C/N ratio and moisture were adjusted to 30 and 60%, respectively, and maintain the moisture at around 60% [13]. The rate of 0.5 ml/min was chosen to compulsory ventilation. The composts were conducted for 50 days and samples were collected at day 0, 8, 20 and 32, which were regarded as the samples of heating phase (HP), thermophilic phase (TP), cooling phase (CP) and maturity phase (MP) to analysis bacteria communities. The temperature of the four phases were 35°C, 57°C, 43°C and 40°C, respectively.

The total DNA extraction was conducted on the DNA kit (Omega Biotek, Inc), agarose gel electrophoresis was used to check DNA quality. For PCR-DGGE analysis, the prokaryotic 341F/534R was applied to amplify bacteria DNA (Table 1). The system setting and method of polymerase chain reaction (PCR) were according to the proposal of Wei et al. [14] and the denaturing gradient gel electrophoresis (DGGE) followed the description of Zhao et al. [12].

HS precursors include polyphenols, carboxyl, amino acids, reducing sugars and polysaccharides were extracted and analysis in this study. Details of analytical methods have been reported in previous studies on HS formation aspects in Wu et al. [7]. Briefly, polyphenols were extracted according to the method of Baddi et al. [15]. Analysis of polyphenols was carried out on Agilent 1260, fitted with Agilent Zorbax Eclipse plus C18 reverse-phase column (250 mm × 4.6 mm) and detected with a UV diode-array detector (Agilent 1260) set at 280 nm. Carboxyl concentration was detected by the method of titration [4]. The amino acids, reducing sugar and polysaccharide concentration were detected by ninhydrin color liquid, anthrone reagent and dinitro-salicylate reagent, respectively [16].

HAs were extracted following the procedure of Zhou et al. [17]. The HAs concentration was analyzed by shimadzu TOC-VCPH, Japan.

Data processing was performed using Quantity one software (version 4.5, Bio-Rad laboratories, USA) and Canoco for Windows (Version 5.0). The significant level of differences in the research was set as p<0.05.

The Effect of Bacteria on the Formation of Humid Substance 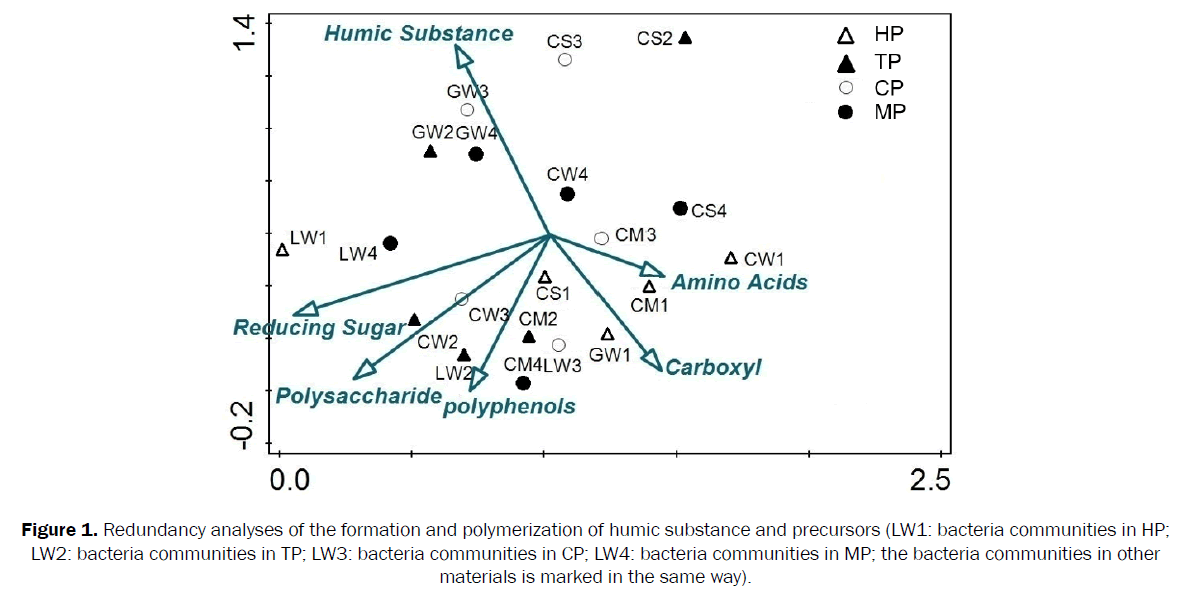 The Differences among Various Composting Materials

The non-metric multidimensional (NMDS) was utilized to detect the difference and similarity of the changes of precursor’s concentration and bacteria species information during different materials composting. It is of great significance to explore the formation of HS in different materials composting. The NMDS of precursors concentration shows that the five materials are divided into five groups (Figure 2), this may be due to the different properties of the raw materials. The results in Figure 1 illustrate that the bacteria in LW composting mainly produce reducing sugars and polyphenols. That may be caused by the large amount of easily decomposed cellulose in LW, which provide adequate substrate for the production of polysaccharides and polyphenols during composting. The cellulose is also the main structural substance of CW and CS; however, they are not classified as the same group with LW. During the composting process, the polysaccharides, polyphenols and carboxyl are mainly produced by CW and CS, which was similar to LW. The main structure of GW is lignin, which is difficult to be degraded by microorganisms during composting [19]. Therefore, during the GW composting, protein and any other simple organic matters primarily decomposed by microbe. Nevertheless, the lignin degradation may mainly conduct in the later stage of composting combining with the HS formation. Whereas in CM composting, the amino acids are the main precursors of HS, because protein is the main structure of CM. Besides, the bacteria communities in varied composting periods were different. The bacteria information in the five composting materials was mainly be divided into three categories: 1) Bacteria in HP; 2) Bacteria in HP and CP, 3) Bacteria in MP. This result demonstrates that the bacteria in the same period of different materials perform similar functions. But there are also some functional bacteria communities which play key roles in the formation of precursors [7]. In conclusion, the formation and polymerization of HS precursors can be regulated by staging during different materials composting. The key bacteria communities related to the evolution of HS precursors had been discussed in previous study of Wu et al. [7]. Therefore, it can be combined with this study to provide a new staging regulating method. 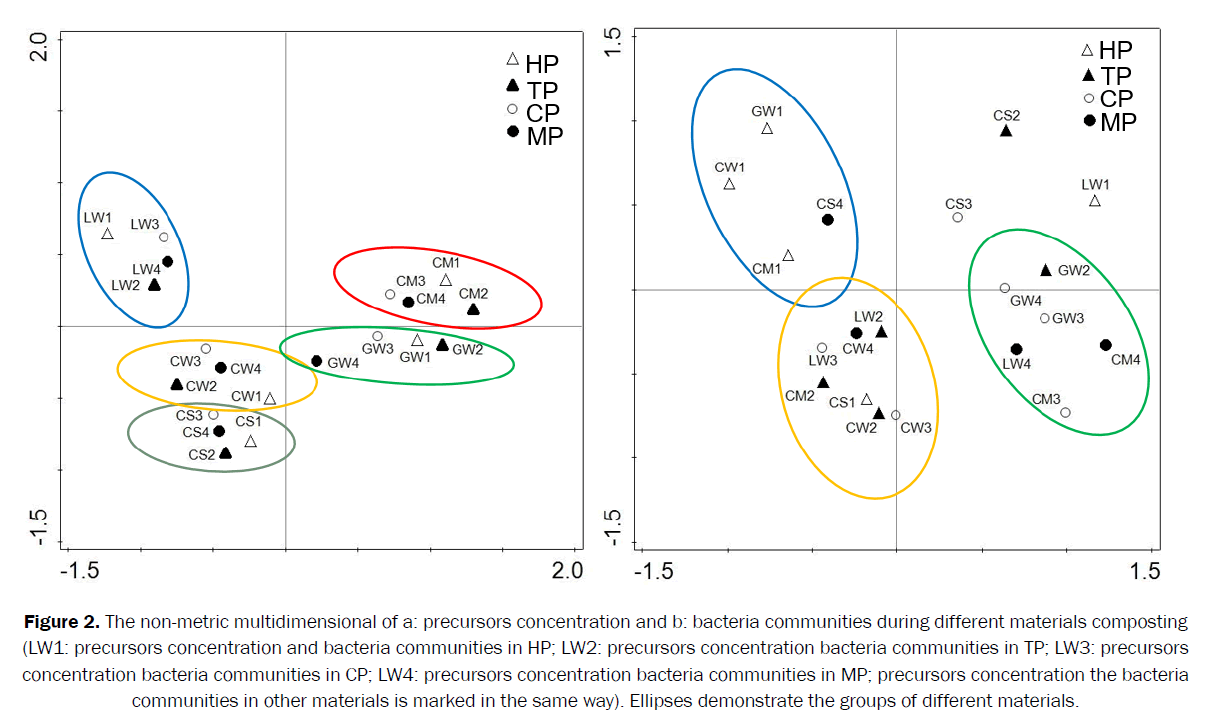 There is no doubt that HS and its fractions have very important effect in environmental remediation [20,21]. As large of efforts availably improved HS production by adding lignin, biochar and any other waste materials, their fundamental theory is to provide precursors for HS formation [17,22,23]. However, little research has been done to promote the production of HS precursors by regulating key bacteria activity during different materials composting. Given that, we focused on the relationships between bacteria communities and precursors, especially the formation and polymerization rules of the precursors in different composting periods under the effect of key bacteria. According to Figure 2, the dynamics of precursor’s concentration are various in different materials composting. Therefore, based on the previous study of Wu et al. [7], we provide a staging regulating method to enhance the formation and polymerization of HS precursors during different materials composting. For example, Figure 3 shows the staging regulating method of LW for promoting the production of precursors to formation HS. The relationships between the environment factors, bacteria and precursors are positive in Figure 3. In the HP of LW composting, the activities of band 7 and 19 can be improved by adding NH4+-N, which lead to the accumulation of reducing sugar. The increased reducing sugar concentration can not only satisfy the growth of microorganisms, but also provide substrate for microbial synthesis of HS precursors. In addition, the band 7 and 19 can also promote the formation of polyphenols and reducing sugars in TP of LW composting. Accordingly, in the first two stages of LW composting, the NH4+-N concentration can be increased by the ammonia containing wastewater, CM and even the ammonia gas obtained from composting gas recovery. It not only benefits for the waste disposal, but also reduces the toxic gas pollution. During the CP of LW composting, the key bacteria communities have evolved to band 9, 14 and 19, which mainly promote the formation of polyphenols, carboxyl, amino acids and HS. Band 19 still promotes the production of reducing sugars, but other precursors are more dominant. In this period, the precursors can be promoted by increasing the NO3--N concentration, pH or C/N. Among them, raising the compost C/N is the easiest to achieve. Therefore, the crop waste may be one of the best choices. Especially in China, as a large agricultural country, a large number of agricultural straw need reasonable treatment. In the MP of LW composting, the key bacteria are just as before in addition to band 9, which activity can also be enhanced by NO3--N concentration, pH or C/N in MP. Nevertheless, due to the decline in microbial activity and diversity in the MP of composting, the easily decreased materials may be a good choice to improve the C/N, for instance the fruit and vegetable or sugar-moll wastes. In this way, the wastes can be reasonably disposed and the emission of waste gas can also be decreased.

This study illustrates that the HS is formed throughout the period of composting, whereas the precursors are mainly formed in the HP and TP. The results of NMDS show that the dynamics of precursor’s concentration in various materials composting are different from each other, and the bacteria communities are divided into three groups based on the different periods of composting: 1) Bacteria in HP; 2) Bacteria in HP and CP and 3) Bacteria in MP, respectively. Finally, a staging regulating method is proposed to promote the HS amount according to different materials.