Characterization of the Complete Chloroplast Genome of Rhus Chinensis (Anacardiaceae), An Important Medicinal and Economic Plant from China

Rhus chinensis is a common deciduous tree in the warm temperate zone of eastern Asia, on which Chinese sumac aphids live to form gallnuts with rich tannins. Here, we assembled the complete chloroplast genome of R. chinensis with the shot-gun genome skimming method on an Illumina HiSeq4000 platform. The complete chloroplast genome of R. chinensis was 149,083 bp in length and had a standard quadripartite structure with the large (LSC, 97,271 bp) and small (SSC, 18,524 bp) single copy regions separated by a pair of inverted repeats (IRs, 16,644 bp each). We successfully annotated 126 genes, including 82 protein-coding genes, 36 tRNAs genes and eight rRNAs genes. Among these genes, 29 genes located in IR regions. The overall GC content of the complete chloroplast genome highly reaches 45.5%.

Rhus chinensis belongs to the Family Anacardiaceae, which is a common deciduous tree that mainly distributed in the warm temperate zone of eastern Asia [1,2]. This species is an important medicinal plant, whose stem, leaf, flower and fruit can be used in medicine [3]. Recently, the studies on R. chinensis has indicated promising health benefits, such as anticancer, antiviral, antimicrobial, antidiarrheal and anti-inflammatory properties [4-7]. More importantly, R. chinensis is the primary host plant of several Chinese sumac aphids, which live on this species to form galls with high tannins [8]. The galls are economically important for traditional Chinese medicine and the tannins from the galls have been utilized in the rubber industry and improving leather quality [9,10]. The previous studies on R. chinensis mainly focused on traditional medicinal uses, seed propagation, genetic diversification, genetic diversity and evolutionary history, and other photosynthetic and eco-physiological characteristics [11-17]. However, it has never been reported about the complete chloroplast genome of R. chinensis. Furthermore, with the intensification of excessive deforestation, overgrazing and other anthropogenic activities, the natural resources of R. chinensis are declining, which makes its protective effects significantly reduced and seriously affects the sustainable development of ecological environment in the warm temperate zone of eastern Asia. Therefore, we here performed the complete chloroplast genome of R. chinensis with Illumina HiSeq4000 platform for the purpose of better understanding the genome structure and function and providing more significant genetic information for the germplasm protection and reasonable development of the traditional medicinal plant. 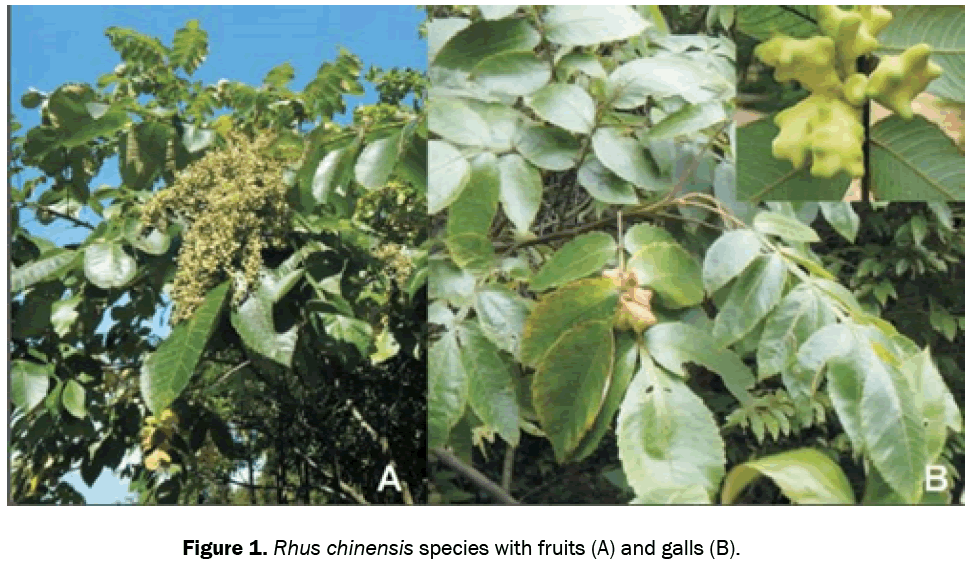 Figure 1: Rhus chinensis species with fruits (A) and galls (B).

Figure 2: Gene map of the complete chloroplast genome of Rhus chinensis. Genes lying inside of the outer circle are transcribed in clockwise direction, whereas those outsides are in counterclockwise direction. Thicker lines in the outer circle represent IR regions, which separate the chloroplast genome into LSC and SSC regions. The darker gray in the inner circle corresponds to GC content, while the lighter corresponds to AT content.

Such information is very crucial not only to develop and screen Rhus genus-specific cpDNA barcodes, but also to provide a lot of useful genetic resources for the analysis of species delimitation and speciation, characterization of population genetic structure and genetic diversity, and more effective protection of the genus.

This study was partially supported by the National High Technology Research and Development “863” Program (2014AA021802), the National Natural Science Foundation of China (31170359), the Hundred-Talent Project in Shanxi Province, Shanxi Scholarship Council of China (2013-020), and the Laboratory of Analytical Biology of the National Museum of Natural History and the Endowment Grants Program of Smithsonian Institution. Computing was performed on the Smithsonian Institution High Performance Cluster (SI/HPC), Hydra.