Objective: The designation of this study was to compare the knowledge attained by third-year dental students in three clinical exercises in the disciplines of periodontology, conservative dentistry and prosthodontics respectively through video and live demonstrations. Methods: The study was performed on 26 third-year dental students who were randomly segregated into two groups to view a video or live demonstration over three clinical demonstrations. Results: The results were evaluated by calculating the pre-test and posttest scores answered by the pupils of both video and live group before and after viewing either demonstrations respectively. Evaluation and comparison of live and video group showed that the scores obtained by students of the live group were statistically significantly higher than the video group. Therefore, the study resulted in students perceiving better learning outcomes in the live demonstration than the video group as it had the luxury of interaction and clarification with the demonstrator which was lacking in the video counterpart. Conclusion: In our study, the live demonstration had out-performed its video counterpart in all the three sessions. In addition, it must be emphasized that the effectuality of the live demonstration solely lies on the potentiality and the skill of the demonstrator

Education has been the ultimate key to open the golden door of freedom and opportunities throughout the dawn of times. However, in education, the ability or the means to unravel the valuable information is paramount [1]. The modern world has equipped us with remarkable number of advancements in the field of technology. The era of chalk and board has been camouflaged by the penetration of the internet world and other media-rich audio-visual aids, thus presenting an opportunity to utilize these technologies in the field of education [2]. Above use of these technologies would prove essential for distance education as well as to accommodate more students.

The use of video as an essential educational aid has been found to be analogous to the traditional forms of education such as written or face to face interaction [3]. Numerous studies claim that video conferencing has been successfully employed for distant or offshore learning with the supplementary use of recorded multimedia forms in many countries [4-7]. Studies report that video-demonstration has been particularly useful in universities in terms of modifying the clinical behaviour of undergraduate medical students [8].

Video has the dexterity to be forwarded, rewound or reviewed at one’s will and thus allowing one to deploy it any number of times [9]. Whilst video demonstration has a major advantage of providing the audience with a better visualization and ensuring a comfortable viewing angle, it lacks the luxury of interacting and clarifying queries with the instructor as in live-demonstration [10]. However, live demonstration is limited in the scope of enrolling a large group of students because not every student could be assured a good vantage point for the demonstration [11]. Whilst there are many advantages and limitations in both forms of demonstration, it is essential to investigate the effectiveness of the two types of demonstrations among dental students in regards to some common dental procedures.

For a video demonstration to be effective, the video must be built with discreet use of technology ensuing the principles of the lesson plan and the outcome assessment [9]. As there are only meagre comparisons of video to the clinical demonstration in clinical dentistry, the need to commend further inquest in the same is essential. The designation of this study was to compare the knowledge attained by third-year dental students in three clinical exercises in the discipline of periodontology, conservative dentistry and prosthodontics respectively through video and live in-person demonstrations.

A concurrent parallel study was aimed at third-year dental students, the graduating class of 2016, who were enrolled in Priyadarshini Dental College and Hospital, Thiruvallur, Tamil Nadu. The request for sample size was sent to a statistician from whom we obtained the sample size of 26 students from third-year based on 90% power and 0.05 α error using t-test.

The total number of students (n=26) were randomly segregated into two groups as group A (n=13) and group B (n=13) in order to minimise bias and confounding effects. Three foundation lessons of clinical training were chosen in the following disciplines:

At the beginning of each session, all the 26 enrolled students were given a written pre-test assessment questionnaire which included a set of 15 multiple choice questions (MCQs) pertaining to the basic terms and concepts related to the clinical exercises of the respective departments. The questionnaire was individually answered by each student and was collected by a staff member to be scored out of 100%. This was done specially to analyse the threshold of knowledge of each student for the respective exercise at the beginning of each session.

The students were then divided into two different groups (A and B) (Figure 1). One batch was to be appearing for the inperson clinical demonstration and the other batch for the video demonstration. The demonstrator, the lesson theme and the lesson content were alike for both the batches. The clinical procedure was demonstrated on a patient with their informed consent. 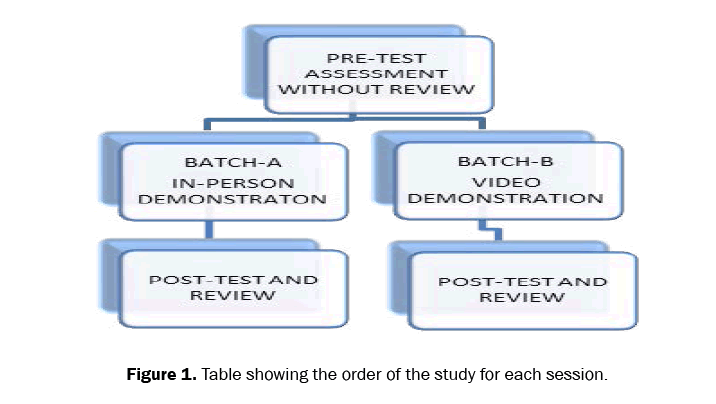 Figure 1: Table showing the order of the study for each session.

The video was built with a tripod supported video camera (Sony DCR-SR68E, Tokyo, Japan) in movie mode using 720 × 480 pixels resolution. The video was taped in motion JPEG format with an AVI wrapper. The editing of the same was employed using Windows Live Movie Maker software (Windows 7, Microsoft Corporation, Redmond, WA, USA). The duration of each of the three videos ranged from 30 to 45 minutes. The final format of the video was published only after it was reviewed by all the staff members pertaining to the respective departments. The videos were then run on a laptop (Dell N5010, Dell corporation, Round Rock, TX, USA) and projected using a projector (Sony VPL-DX140 LCD Home Cinema Projector (1024 x 768, Tokyo, Japan) onto the viewing screen in the classroom for the video-demonstration group.

After both the forms of demonstration were completed, the students were given the same questionnaire as a post-test assessment which was then collected and scored out of 100%. There was a final discussion to review the answers to the questionnaire to ensure that all the students understood what was demonstrated and also to assess the common errors, if there were any. At the end, all data were entered into SPSS version 16 (IBM corporation, Armonk, NY, USA). Analysis of variance (t-test) was used to test the differences of the mean percentage scores between the video and in-person demonstration in the pre-test and post-test separately amongst the three sessions.

The total number of pupils was 26 out of which 18 (69.3%) were girls and 8 (30.7%) were boys. There was 100% attendance in all the 3 sessions with the students being very cooperative. The students were split equally and randomly with one group viewing a live demonstration, whilst the other group viewing the video demonstration for all the three sessions. The pre-test and post-test marks were scored from 1 to 100% and the comparison was made with same scores. The post-test scores were incontestably greater than that of the pre-test scores in all the three sessions for both groups. Since the pre-test was mainly based on the individual’s fruition on his or hers’ depth of knowledge in that particular subject the same was not given much gravity in the results section. As the aim of the study was to scrutinize the difference between the live and video demonstration, only the post-test scores of the pupils of two groups (live and video) was accentuated. The same was processed by utilizing the statistical analysis software called the SPSS software (version 16.0).

Table 1: Sessions, types of demonstration and strength of each group.

Table 2: t-test for equality of means for session 1, session 2 and session 3.

Coming to the crux of the result;

The post-test scores for live and video group are highly statistically significant since P<0.05 as P=0.002.

The below mentioned tables; Tables 3-5 show the descriptive statistics of the respective sessions.

A graphical representation of the means of the post-test scores of video and live group of three sessions is as follows:

Figure 2: Distribution of mean value for post-test scores of live and video group in session 1 periodontology. 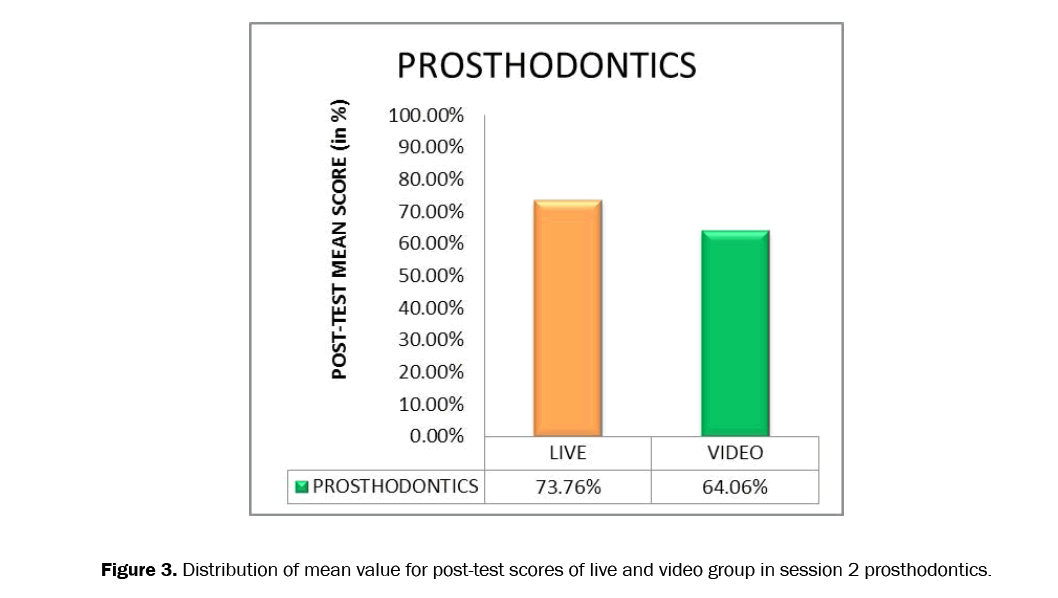 Figure 3: Distribution of mean value for post-test scores of live and video group in session 2 prosthodontics. 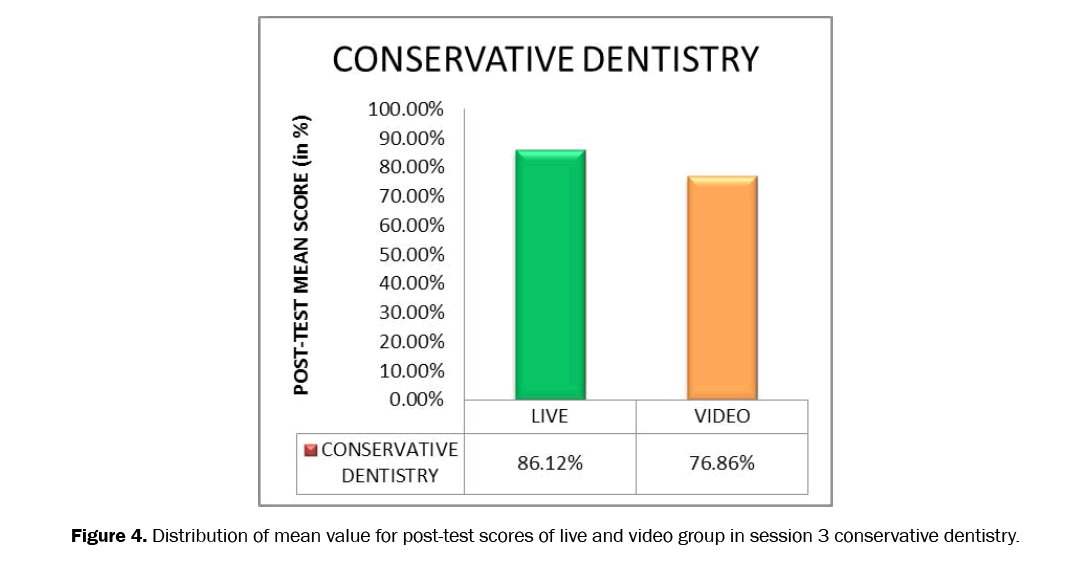 This study was pursued to appraise the proficiency of the third-year dental students and their notion towards the utilization of live and video demonstration in their early years of approaching dentistry. As per the pre-test assessment, pupils of both live and video group had similar baseline knowledge. Nevertheless, in the post-test scores, the live demonstration group was estimated to be effective than the video group in their scores in all three sessions.

One issue that proved impediment was the limited number of pupils in each group. Nonetheless, the finite group of 13 pupils in number proved effective as there was a possibility of better interaction between the students and the teacher. Moreover, the limited number of students in each group provided an opportunity to visualize the live demonstration better and perceive the detailed instructions of the teacher in a fitter manner rather than in a voluminous group. The other merit in this study is that it could able to cover three clinical procedures pertaining to three different disciplines of departments respectively.

The limitations to this study when compared to the other similar studies is that it did not provide the students with the luxury of viewing both live and video demonstration and then complimenting on their desire and the results. One other thing that this study could have done differently is that the students could have had an exposure to the respective procedures on patients by applying the recent knowledge they perceived either through live or video demonstration based on the group where they were assigned.

The standardization protocol was followed by means of making both the live and video demonstration viewable only once for the respective groups. The difference in this study is that it has focused mainly on which type of demonstration gained the upper hand with adherence to strict protocols where either of the demonstration did not have any other models or additional study materials as a form of supplementary source of teaching despite the professor him/her-self. One other difference is that the questionnaire was strictly assessed academically rather than an opinionated questionnaire.

This study is just small steps to a much greener side with superlative advances and complex treatment procedures with a more technologically improvised armamentarium.

In our study, the live demonstration had out-performed its video counterpart in all the three sessions. However, it must be emphasized that the effectuality of the live demonstration solely lies on the potentiality and the skill of the demonstrator. There is a need for further investigation as there has to be more studies designed to include more subjects and also a thorough clinical teaching in various disciplines of dentistry.

Video demonstration alone has not stood up to its expectations when compared to the live demonstration. Live demonstration has of course proved to be ‘top-notch’ as it had the luxury of having an interaction with the demonstrator for any clarification then and there which was lacking in the video counterpart. All the more, with a helping hand of the visually appealing impact of multimedia and video demonstrations, especially in this golden era of technology may probably reinforce more interest and thereby prove extra benefit to the students inevitably in the days to come.