†These authors contributed equally to this work

Upland cotton (Gossypium hirsutum) accounts for more than 95% of the world cotton production but its genetic base has seriously narrowed. It is necessary to utilize desirable genes from its semi-wild lines which have enviable traits such as saline-alkaline tolerance. In this study, linkage groups were constructed using an F2 population derived from an intraspecific cross between a semi-wild line (marie-galante 85) and a cultivar (CCRI-16) in the upland cotton (G. hirsutum L.). The map was based entirely on genome-wide simple sequence repeat markers. A total of 69 loci were mapped in 13 linkage groups covering a genome length of 615 cM with an average inter-locus distance of 8.9 cM. The average length of linkage group in this map is 47.3 cM, with an average number of five loci per linkage group. Based on the common primer SWU11887, one linkage group corresponded to chromosome 2. The results may lay a foundation for quantitative trait loci mapping which will facilitate the improvement of cultivars or varieties within upland cotton.

Cotton (Gossypium spp.) is the world’s leading natural fiber crop, which supplies approximately 35% of the total fiber used, and cotton also acts as an important oil and protein crop [1-3]. The genus Gossypium identified includes 53 species of two polyploidy levels, of which 47 are diploid (2n=2x=26) and six are tetraploid (2n=4x=52) [4]. Moreover, there are four cultivated species: two diploids, G. herbaceum and G. arboreum, and two allotetraploids, G. hirsutum and G. barbadense. Among these species, upland cotton (G. hirsutum) accounts for over 95% of the world cotton production because of its wider adaptability across the globe. However, the narrow genetic background of cultivated upland cotton has resulted in inbreeding depression and reduced genetic variability. Moreover, different degrees of sterility and distinct segregation distortions, and propensity to preserve the parental haplotypes of interspecific hybrids are unusual features which hinder the progress of enriching the genomes of cultivated cotton species [5,6]. For the cultivated species of upland cotton, there are seven races (also named semi-wild cotton) from which the modern cultivated cotton (lines, cultivars or varieties) were directly domesticated, and hence they have the closest relationship. The races have a large indigenous range, collectively encompass a wealth of morphological forms, and span the wildto- domesticated continuum [7,8], alleviating the limitation between interspecies and broadening the existing narrow genetic base.

Upland cotton (G. hirsutum) is widely distributed in Central and South America, the Caribbean, and even reaches distant islands in the Pacific (Solomon Islands, Marquesas). Hutchinson classified the diversity of upland cotton (G. hirsutum) into seven geographical races [9]: punctatum, latifolium, marie-galante, palmeri, morrilli, yucatanense and richmondi, which was also supported by the simple sequence repeats (SSR) study [11]. The wide phenotypic and genetic diversity of the races were also confirmed in various ways [10,11]. Meanwhile, the excellent phenotypes, together with the existence of genetic variation, attracted the researchers [10,12].

Genetic map can create a basic platform for the studies on marker assisted selection, gene/quantitative trait loci (QTL) cloning, genome sequence assembly, association mapping and evolutionary analysis. To date, several intra- and inter-specific genetic maps have been constructed using molecular markers in cotton. Moreover, most of the interspecific genetic maps were constructed using different types of populations between Upland cotton (G. hirsutum) and G. barbadense [18-26]. Many reports were on intraspecific genetic maps, however, because of the distant relationships between the Gossypium species or very narrow genetic diversity within cultivated accessions in upland cotton (G. hirsutum), it may be an effective way to construct a genetic map from a semi-wild line with cultivars [3,27-35].

Till now, there have been 19,074 publicly available SSRs (genomic SSRs and EST-SSRs), 3,541 RFLPs, 2,146 AFLPs and 1,018 single-nucleotide polymorphisms (SNPs) published on the Cotton Genome database (http://www.cottongen.org/), and most of them have been used on genetic maps construction and quantitative trait loci (QTL) detection. Among the different types of molecular markers, microsatellites or simple sequence repeats (SSRs) are popular for constructing genetic map, because they are specific and simple. However, few SSR markers have been used in cotton breeding. The development of more new polymorphic SSR markers and genetic map from the new SSRs is therefore of great importance in cotton breeding.

In this study, we used an F2 population derived from the semi-wild line ‘marie-galante 85’ with a cultivar ‘CCRI-16’, to construct the genetic map using the SSR markers developed from G. raimondii sequences, designed by professor Zhang who came from Southwest University. The objective is to provide the basic foundation for a high density genetic map, the genetic dissection of important traits, the utilization of desirable genes from G. hirsutum races in breeding by marker-assisted selection (MAS) and map-based cloning [36].

An F2 population was developed from an intraspecific cross in upland cotton between the semi-wild line marie-galante 85 (as the male parent) and the cultivar CCRI-16 (as the female parent). Marie-galante 85, a line of semi-wild cotton or race of G. hirsutum, was identified to be saline-tolerant using different methods and in several areas during the last five years [17]. The CCRI- 16 is an outstanding cultivar with good characters, created by the Institute of Cotton Research, Chinese Academy of Agricultural Sciences (ICR-CAAS). The parents were crossed in Hainan Island, China, during winter in 2014. In the same year, the F1 were selfpollinated to produce F2 seeds. Then 188 plants were randomly selected from the F2 total plants for the construction of genetic map during summer in 2015 in Anyang, Henan, China. Only those plants that were mechanically damaged or showed unusual signs of insect or disease damaged were eliminated from consideration. Genomic DNA of parents, F1 and 188 F2 mapping individuals were extracted from young leaf tissue using a modified CTAB DNA extraction procedure. DNA solutions were quantified using NanoDrop 2000 (Thermo Co. Ltd.), diluted to working concentration (10 ng/uL) in 1 × TE buffer, and then stored at -20°C until PCR amplification.

A total of 12,560 SSR primer pairs were first screened for polymorphism between the marie-galante 85 and CCRI-16. These primer sequences were designed from G. raimondii genome sequences, by professor Zhang from Southwest University, and were synthesized by Invitrogen Co. Ltd. (Shanghai, China). PCR amplification and product electrophoresis were conducted by TAKARA Bio Inc. TP 600 thermal cycler and silver stained according to the procedures described by Chen et al. [36,37]. SSR data collection was done manually using 6% non-denaturing PAGE gel-based assays. Primer pairs with clear polymorphism were used to genotype the 188 individuals of the F2 mapping population. According to the parents and F1-based authentication, primers were identified as dominant or co-dominant. The data was recorded in A, B, H and AC, BD format. Multiple loci generated by single primer pair were named with the molecular weight following the primer name. The analysis of polymorphic rate was carried out using Microsoft Excel (Microsoft Corporation, Redmond, USA).

Linkage map was conducted using JoinMap 4.0. The Kosambi’s mapping function was used to convert recombination frequencies into map distances [38]. Log-of-odds (LOD) value of 3.0 was used to determine all linkage groups. Linkage groups were assigned to chromosomes based on common markers from previously reported maps [39].

A total of 12,560 SSR primer pairs were used to screen polymorphic primer pairs between the two parents (marie-galante 85 and CCRI-16), 293 polymorphic primer pairs were obtained, with the polymorphism ratio of 2.3%. Then 91 polymorphic SSR primers, which produced clear and polymorphic bands, were used to genotype 188 individuals of the F2 population and 97 marker loci were obtained, because six primer pairs amplified two stable bands with different molecular weights. These loci were therefore named for example as SWU12918a_163 and SWU12918b_300, which produced bands with about 163 bp and 300 bp respectively. Moreover, 68 loci of the total were codominant, accounting for 70.1% while 29.9% (29) were dominant.

JoinMap 4.0 mapping software being used to carry out linkage analysis of the 97 polymorphic loci and map distances in centimorgans (cM) being calculated using Kosambi’s mapping function, 33 linkage groups were obtained, in which 13 had at least three loci each, accounting to 69 loci (Figure 1) [38]. Another eight linkage groups had two loci each while the remaining twelve loci did not form any linkage group, and were classified as ungrouped. Of the 69 loci, 59 markers amplified single locus while five markers generated two loci each. The largest linkage group had eleven loci. Only linkage group two was possible to be linked to its corresponding chromosome (chromosome 2) based on Shang et al. [39]. Out of the eleven mapped loci in linkage 2, seven were codominant, whereas four were dominant in which three received its alleles from G. hirsutum L var. CCRI-16 and one from G. hirsutum marie-galante 85. 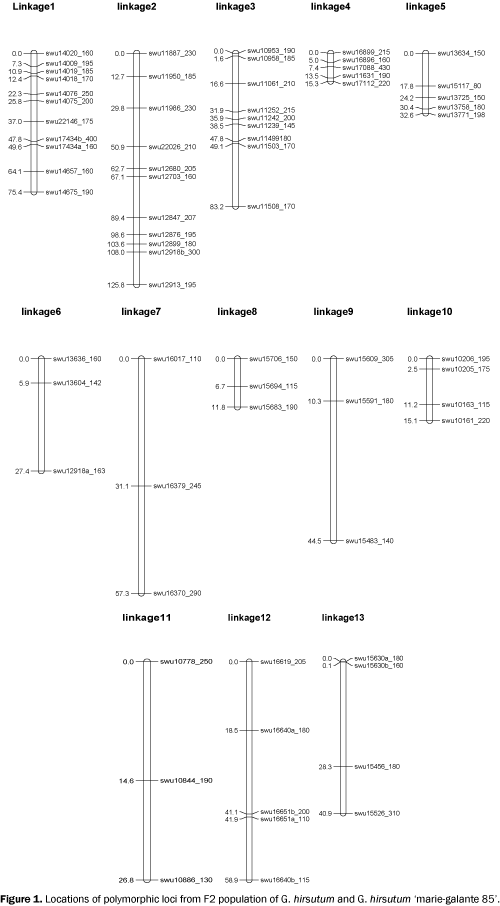 Cultivated upland cotton has a very narrow genetic background, which results in low diversity of alleles controlling a target trait between two given parents. Therefore, far less polymorphic markers were mapped on the linkage groups derived from the intraspecific population, which have previously been reported [3,27-29,31-33,35]. In this study, diversity of alleles were detected between the cultivated and the semi-wild upland cotton materials, G. hirsutum L var. CCRI-16 and G. hirsutum marie-galante 85, which had quite different characteristics in saline-alkaline resistance and many other agronomic traits, but had closer relationship without any reproductive isolation.

SSR markers were used in this study because they are robust, easy to generate and can be used to identify the heterozygotes among the individuals of mapping population as they are co-dominant markers and hence provide more genetic information while constructing genetic map. SSRs are highly abundant especially in eukaryotes, randomly distributed across the genome, and more often associated with non-repetitive DNA [40]. Therefore, SSRs are highly polymorphic markers and can be employed for variety of species ranging from similar to diverse species. These are the reasons why most of the researchers considered them ideal markers in gene mapping studies [41,42].

In this study, 69 loci were mapped to linkage groups, and eleven loci were linked to chromosome 2 based on the common markers from the reported maps [39]. The linkage groups generated in this study may lay a foundation for enriching the genetic map for further analysis. However, owing to the narrow genetic base in upland cotton, the differences among upland cotton genome sequences may be mainly due to single-base deletions, insertions and mutations. Using the genome sequence of upland cotton reported and developing polymorphism from SNPs could be more effective than SSRs in intraspecific population studies of upland cotton [43,44].

Soil salinization is such a serious problem in the whole world that the development of saline-alkali tolerant cotton is quite necessary. Based on SSRs, genetic map of the F2 population derived from G. hirsutum (CCRI 16) × G. hirsutum marie-galante 85 was assembled. Totally, 13 linkage groups, covering a genome length of 615 cM with an average inter-locus distance of 8.9 cM, were constructed. The average length of linkage group was 47.3 cM, and the average loci number was five for each linkage group. The main results may lay a foundation for QTL mapping which will improve the saline-alkali tolerance of cultivated upland cotton.

This work was supported by grants from the national natural science fund project (No. 31530053).