Ammoniacal Nitrogen is one of the wastewater contaminant which can be found in many type of wastewater. Excessive ammoniacal Nitrogen in water body can lead to eutrophications. Eutrophications induces excessive plant and algal growth and decay and caused degradation of the water quality. This algal blooms limits light penetration. Eutrophications promote anoxia in the water body which kills fish and invertebrates and also leads to unpleasant and injurious gases.

Many species of macrophytes have been studied in removing Ammoniacal Nitrogen in various type of wastewater. The ammonium ions uptake by plants depends on several factors such as, sunlight, biomass, and plant type.

Ammoniacal Nitrogen in Wastewater: Sources and Effect in the Environment

Ammonia is colourless gas and exhibits a pungent smell at ambient temperature and pressure. It is the main constituents of domestic wastewater concentrations which generally range from 10 to 50 mg/L. It is very soluble in water and in water it exists in equilibrium between ionized ammonia (NH3) and ionized ammonia (NH4+) species. A number of studies indicated that total ammonia toxicity is caused by the effect of the unionized NH3 [3]. Total ammonia is usually referred as the summation of ammonia and ammonium concentrations [4]. The ammonium ions is an important element which is needed in plants for growth.

The presence of ammoniacal Nitrogen in water leads to environmental problems such as eutrophication of surface water, changes in ecosystems and acidifications. The ammoniacal nitrogen’s part in aquatic eutrophication is as a source of nitrogen needed for the production of nitrates. The high concentration of nitrates and ammonia in a water body resulted in a toxic environment and may cause to oxygen deficient conditions from the nitrification process. In a severe eutrophication, a hypoxic condition creates a dead zone where no aquatic life can survive [5].

Phytoremediation is the utilization of plant for the in situ removal, degradation, or control of contaminants in soils, sludges, sediments, surface water and ground water [6]. It is a cheap, solar dependent and environmentally friendly technology in relative with the conventional contaminants cleanup technology (USEPA). The application of phytoremediation in a contaminated site is attractive due to its cost-effectiveness and brought a relatively low environmental impact [6]. Phytoremediation cover several technologies, these technologies include Phytoextraction, Rhizofiltration, phytodegradation, phytovolatilization, rhizosphere bioremediation, Uptake and metabolism of pollutants in plants.

Phytoextraction is the removal of metal with plants in the soil to the upper parts of the plants. Phytoextraction can be used to treat contaminated soils (EPA). The removal of metal contaminants is done by the plant through absorption, concentrate and precipitate to the shoots and leaves of the plant. The type of plants which have the relatively high capability is known as Hyperaccumulator. The processes of hyperaccumulation of metals by plants are usually comprised of three processes. These processes are via adsorption, transport and translocation which require large sinks to accumulate the contaminants (EPA).

The disadvantages of the phytoextraction is the plant species usually have slow growth and possess low biomass [7]. Ideal plants for phytoextraction include ability to grow outside its area of collection, fast growth, high biomass, easy harvesting and accumulation of a range of heavy metals in their harvestable parts [8].

Rhizofiltration is typically exploited in groundwater (either in situ or extracted), surface water, or wastewater for removal of metals or other inorganic compounds (EPA). The Rhizofiltration process utilized plant roots to absorb, concentrate, and precipitate contaminants. Rhizofiltration decrease the mobility of contaminants and circumvent migration to ground water thus decreasing the bioavailability for access into the food chain [9].

The mechanisms of rhizofiltration are governed by the physical and biochemical impacts of plant roots in waste water treatment. The efficiency of the mechanism is influenced by the ability of the roots to produce specific metals which will cause the heavy metals to rise in plant body. In which, the plant root exudates and changes in rhizosphere, the pH surrounding the roots of the plant can potentially cause metals to precipitate onto the roots surfaces. When the roots become saturated with heavy metals contaminants, either the roots or the whole plant are harvested for disposal [9].

Phytodegradation involves the degradation of complex organic molecules to simple molecules or the combination of these molecules into plant tissues. Plants contain enzymes (complex chemical proteins) which speed up and chemical reactions. In the phytodegradation, pollutants are broken down by the enzymes and after that taken up by the plant (EPA). Phytodegradation has been successful to treat some organic contaminants, such as chlorinated solvents, herbicides, and munitions, and it can be used to remove contaminants in soil, sediment, or groundwater (EPA).

Phytovolatilization is the plant uptake and transpiration of pollutants by the release of the pollutants or altered form of the contaminants from the plant to the atmosphere [6]. This technology involves pollutants being absorbed into the tissues of the plant as a volatile form or volatile degradation product is transpired with water vapor from the leave [10].

Mercury is one of the example which uses Phytovolatilization for remediation. Other contaminants include organic molecules (trichloroethane) and inorganic chemicals which are volatile (selenium, arsenic) (EPA). The volatilization can be induced by the use of phreatophytes species with high transpiration rates and can overcome stomatal closure through sufficient irrigation [7]. These processes transform the contaminants and convert it into a less toxic substance. However, this technology is likely to be recycled by precipitation and redeposited back into lakes and ocean (EPA).

The plant utilization of nitrogen involves few steps which include uptake, assimilation and translocation [11]. Plant take up mainly three form of nitrogen. These two form of nitrogen include nitrate ions, urea and ammonium ions. Once ammonia is present in the plant cell, it is incorporated into proteins and other organic combination through a biochemical reaction. However, only the ammonium ion is assimilated into the organic molecules in the plant tissues by enzymatic process.

When the plant takes up ammonium ions, it releases one hydrogen ion in the medium solutions. Over time, the uptake of the ammoniacal nitrogen will increase the hydrogen ions concentration and hence decreasing the growing medium pH. However, an increase of ammonium uptake in plants and storage will results in cell damage and will progressed to cell death [13]. The plant transformation of Nitrogen is shown in Figure 1. As illustrated in Figure 1, the excess ammonia in the plant tissues either accumulated or translocated.

The ammonium ions are taken up by the plants from root uptake. The Nitrogen uptake by the root system depends on the nitrogen demand of the entire plant and is depends on the Nitrogen requirement for growth. Nitrogen starvation of plants for several days lead to increased capacity for ammonium uptake [13].

Few factors affecting the plant’s ammonium uptake mechanims as depicted in Figure 2. The uptake performance can be enhanced by considering these factors into account. 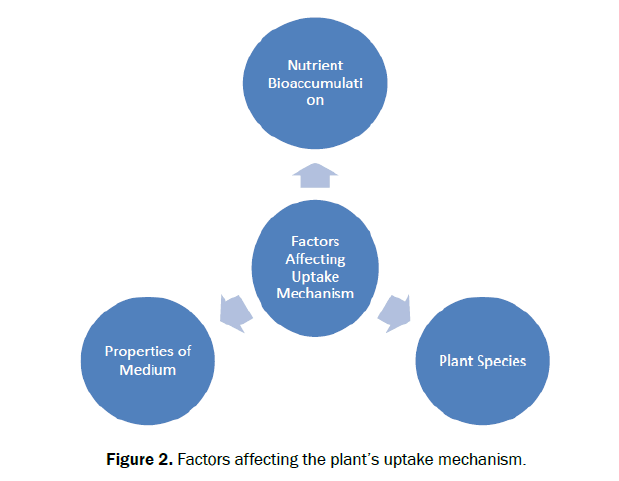 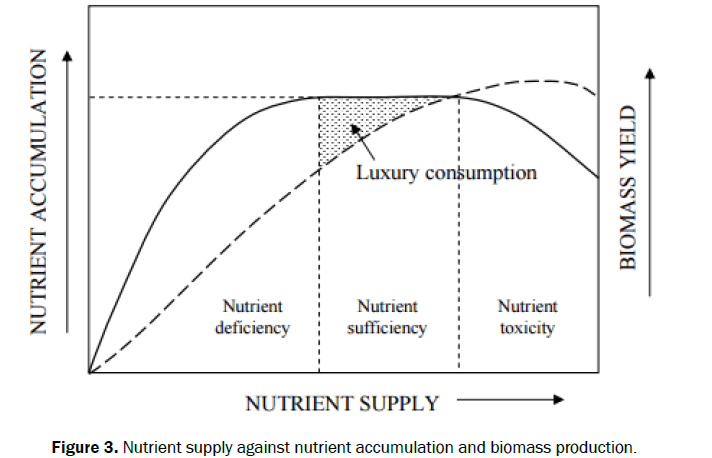 According to Greenway [14], Nutrient content varies with the plant and age. Younger plants and leaves have more nitrogen content. However, when plant grows, the nutrient become lesser. Nevertheless, plant biomass increases with as the plant gets older. Hence, total nutrient accumulation becomes higher.

According to Greenway [14], the rate of ammonium uptake and the assimilation of the nutrients into the plant is key in determining the potential of macrophyte species to be utilized for phytoremediation. The generated plant can utilized as to approximate the nutrient take up by the plant. Macrophytes species with potential ammoniacal nitrogen removal potential were chosen. The rate of ammonium uptake by plants is influence by type of plant. Hence, efficiency of reduction of ammoniacal nitrogen in wastewater depends on the plant tolerance on higher ammoniacal Nitrogen concentrations, low oxygen content (caused by BOD and COD loads), high turbidity.

The performance of the ammonium uptake by plants is also affected by the properties of the external factors. This includes salinity and temperature. Figure 4: Effect of temperature variation on the macrophytes performance in municipal wastewater [15].

According to a study by Izuangbe [17], the remediating efficiency of the aquatic macrophytes will be affected by the salinity of the medium [17].

According to Eaton [18], the decrease in transpiration and total dry weight are the common responses of plants exposed to increasing salinities.

According to Tisadale et al. [19] terrestrial plants varies in its acceptance to salinity as shown in Table 2. According to this, large-leaved floating species are most vulnerable to salinity, submerged species can tolerate high level of salinity. This high salinity level prevents the plant from taking up water by reducing the osmotic pressure.

According to water lettuce and water hyacinth can be significantly affected by lower salinities around 10% and 13.32% respectively. Qin Lu [20] observed that, the water lettuce production was reduced about 30% with salinity 1766 μS cm-1 and inhibited biomass production at higher salinity as founded by Pascale et al. [21].

Advantages and Disadvantages of Phytoremedation

Phytoremediation is driven by the energy from the sun and more environmentally friendly [22]. The advantages of phytoremediation include phytoremediation treatment can be carried out in situ (USEPA). No Expensive equipment and highly skilled personnel is not needed. It is cost effective for large volume of wastewater with content of contaminants [23].

Phytoremediation has lower capital and operational cost. The operational cost is mainly on harvesting, disposal of contaminated plant mass and repeating the plant growth cycle [24]. Besides that, phytoremediation also indirectly enhance the nearby water quality through nutrient uptake by plants and Enhances the site landscape [24]. Last but not least, No specific design life duration is allocated for treatment wetlands [25].

The disadvantages of phytoremediation include large surface area of land is needed for the same or lower level of treatment by the conventional system [25]. Not only that, the Process dynamics is not well understood, hence, resulting in uncertainties in the design and operating factors [25] and Pest control is needed to avoid mosquitoes and other insects or pests from breeding in the system [25].

Besides that, phytoremediation with an outdoor system with large surface area is subjected to variability in efficiency due to temperature variations, wind, storm and floods [25] and the remediation with the utilization of plant is time consuming than the convential remediation technology. Last but not least, Plants need to be tolerant of contaminants and limited by the depth of the roots [26]. Figure 5 summarizes the advantages and disadvantages of phytoremediation. Figure 5: Advantages and disadvantages of phytoremediation.

Table 3. Various study on phytoremediation of different types of wastewater.

Akinbile and Suffian [30] observed that water lettuce root system provides extensive surface area to promote physical, chemical and microbial processes for absorsorption of nutrients and nitrification processes. The phytoremediation treatment with water lettuce resulted reduction in the nutrient levels of the aquaculture wastewater. According to Akinbile and sufian [30], to achieve efficient water purification, grown up biomass of aquatic macrophytes must be harvested from water bodies to keep an optimum plant density. The huge amount of the nutrients that have been incorporated into the plant tissue will be returned back to the water by decomposition process if not harvested.

The authors would like to thank Centre of Renewable Energy (Coere) Unimas for funding this research and University Malaysia Sarawak for the research facilities provided.

Ammoniacal Nitrogen reduction by plants using phytoremediation technology can be a sustainable way to remediate ammoniacal nitrogen from various types of wastewaters. It has some advantages compared with the conventional technologies. However, several factor must be taken account in to increase the efficiency of the remediation. Among the important factors affecting the efficiency of phytoremediation is the nutrient bioaccumulation, properties of medium and plant species. Although phytoremediation appears to be a good choice for sustainable technology, it also has some drawbacks. More study is needed to overcome this drawbacks in order to implement this technique effectively.