Litchi (Litchi chinensis, Sapindaceae), a typical subtropical fruit, has been used by human for thousands years. The fresh fruit is still not widely distributed and consumed today for its physiological traits in generative growth and short shelf life. Cool ambient temperature sensed by mature leaves stimulates floral induction and differentiation. The dormant buds then emerge; become inflorescence at the abaxial sites of shoots. Male- and female-function flowers bloom subsequently along with the warmer weather in spring. Fruitlets take about 3 months to reach maturation, and only 1–5% fruitlet remained after two abscission periods in two successive months. Productive potential of litchi is impacted by photo-assimilate supply from the recurrent flushes on the bearing shoots and the environmental conditions during the reproductive growth. In recent years, several early-maturing litchi cultivars have been developed for benefits of litchi industry. Potential problems and respective solutions should be considered for the early flowering phenology of these cultivars in compared with the traditional cultivars

litchi is originated in humid, subtropical Southeastern Asia region where monsoon occurs. On the view of civilization development, litchi was regarded as the treasurable tribute for the Emperor since Han dynasty (ca. 200 BC), China. On the view of plant physiology, the plant is a typical subtropical fruit tree which required seasonal environmental cues to drive its annual development and fruit production. The fruit is also highly perishable. Therefore, this may be explained the worth of the fruit because the growing area was limited and far from the capitals. Up to date, litchi has commercially grown in more 20 countries around the Tropic of Cancer/Capricorn. The inherent problems of short production and utility season still hinder the industrial values of the fruit. In this article, we briefly reviewed the knowledge on generative growth of litchi, the progress, and the challenges along with crop improvement.

Adequate cool temperature is crucial for floral induction in litchi, as in other subtropical fruit, such as avocado, citrus, macadamia, and mango [1-6]. Mature leaves are also crucial in the floral induction process, and may be responsive to the environmental cues [3,7]. Generally, litchi ceases vegetative flushing in late autumn, and then the putative florigenic gene i T in litchi (LcFT) expressed in mature leaves during floral induction in winter [8-9]. In the early-maturing litchi ‘Sanyuehong’, LcFT1 expression can be triggered by higher threshold temperatures and with pronounced expression than the late-maturing ‘Maguili’ along the coming winter [9]. More sensitive LcFT1 expression results in the early blooming of litchi, and contributes mainly for the early-maturing trait [10]. Accumulation of cool temperature positively affects, not only on floral induction, but also on inflorescence elongation, and the following blooming patterns [2,5,7]. Chen et al. suggested, in artificial pruned ‘Yu Her Pau’ (alternatively named ‘Feizixiao’ or ‘Fay Zee Siu’), an optimum inflorescence length (ca. 20 cm) for loading fruit. Longer inflorescence together with excessive florets possibly causes assimilate competition and leads to poor fruit set. For other cultivars, however, this may be confounded with short panicles formed in late-flowering, which warmer conditions are more favorable for floral development and pollination/fertilization processes [8-10]. Besides short inflorescence, leafy inflorescences sometimes formed in shoots with insufficient leaf maturity or bordered on cool temperature requirement during floral induction [3,11].

Along a single inflorescence, litchi flowers bloom in a specialized series: firstly, the male (Figure 1A), then the female (hermaphrodite flower functioning as female, Figure 1B), and the male (Figure 1C) again [12]. Occasionally, blooms start with female flowers without male flowers as stated above, this is mostly observed on shoots accumulated less cool temperatures [7,13]. Comparisons of morphological and functional difference of the prior bloomed male flowers (so called M1) with the later ones (hermaphrodite flower functioning as male, so called M2) have been discussed in previous reports [14]. Nevertheless, M1 and M2 are easily confused just before the recurrent flowering of female flowers emerge, by chance, in some cultivars, like ‘Yu Her Pau’ (personal observation, Figure 1D).

Recurrent flowering of female flowers was described in ‘Early Big’ litchi, in which the later blooming (2nd R) female flowers bloomed 2–3 weeks later than the prior blooming (1st R) female flowers, independent of 1st R female flower number and its initial set [15]. High proportion of 2nd R female flowers was observed in delayed matured flushes in ‘Rose Red’ litchi [7]. In the latter case, the panicle somehow wobbled between inflorescence development and floral a thesis in spring, as it has been proposed that competition of chilling requirement of inflorescence elongation and the thermal requirement for flowering exist during litchi panicle development [5]. However, this may not explain the causes in cases of ‘Yu Her Pau’ or ‘Early Big’. The mechanisms of recurrent flowering of female flowers are still not clear.

Approximately 11 to 12 weeks are required for litchi vfruit development after female flower anthesis, and two obvious fruit abscission waves can be observed during fruit set (schematic diagram shown in Figure 2) [15,16]. Only 1–5% fruit from female flowers can be harvested [17]. During the first 4 weeks, more than 90% fruitlets abscised due to failure in pollination/fertilization and/or assimilate competition [13,18]. This could be encouraged by shading or raining weather during the female flowering periods. At this time, fruitlets at early stages with fruit length smaller than 1 cm are abscised. Recurrent flowering of female flowers might also contribute to early fruitlet abscission as reported in ‘Early Big’ litchi [15]. 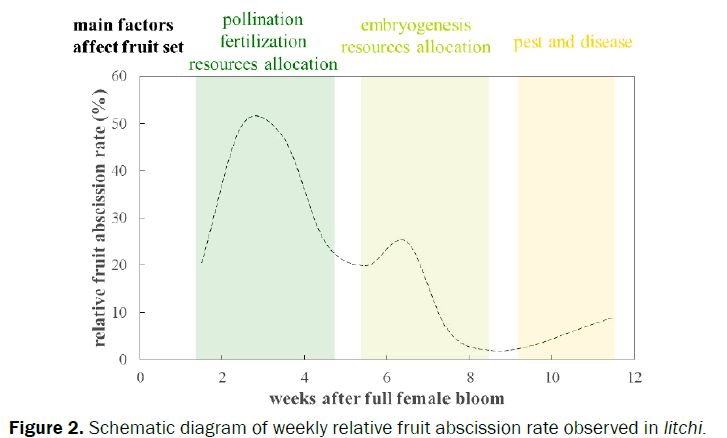 The second fruit abscission wave arises during the second month of fruit development; coincide with rapid embryo and aril growth [19]. At this time, selective fruitlet abscission underwent to favor the bearing of hybridized fruit [16]. It was suggested that auxin synthesis in seed mediates fruit developmental processes, including prevention of premature abscission [20,21]. Since positive relationships between carbohydrate supply and auxin transduction related fruit abscission has been documented in litchi, it is assumed that auxin plays a significant role in litchi fruit retention as well. This is supported by the evidences of improving litchi fruit retention by spraying auxins [19,22]. Moreover, the ratio of shriveled-seed fruit which synchronized with inbreeding can also be increased after application of synthetic auxin just before the onset of second fruit abscission wave [12,23].

Assimilate competition is one of the key factors affecting fruit set in litchi. In Taiwan, bearing shoot of ‘Jiji Nuomici (73-S- 20)’ litchi with three recurrent flushes provides sufficient assimilative ability for more than 15 fruit on the panicle, while less than 10 fruit remained on the panicles when bearing shoot contained only one flush [18]. The study verified that development and bearing of litchi fruit supported principally by current photo-assimilate [24-26]. The canopy constructed by vegetative flushes before reproductive stage is closely correlated to the following crop loading.

Environmental factors impact on litchi production, not only including temperature affects physiological processes on flowering, but such as water stress influences flower and fruit development among different reproductive stage [8,27]. In some cases, litchi production is closely connected with regional climate. Yield of litchi in Kaohsiung City is related to mean temperature in February and relative humidity in March (Figure 3). The warmer average temperature in February is linked to higher litchi yield of the year. This coincides with the observation reported by Chen et al. in a specific orchard in Kaohsiung. Batten first documented a positive relationship between March relative humidity and fruit yields in litchi [9]. Nonetheless, relative humidity in March presents a subtle linkage with litchi yield in Kaohsiung. Though more than 30 years have passed, with the major cultivar, ‘Hak Ip’, grown in Kaohsiung replaced by ‘Yu Her Pau’, the positive relationship still exists as shown in Figure 3. These observations implied that geographic weather giving rise to systematical linkage on litchi fruit production. 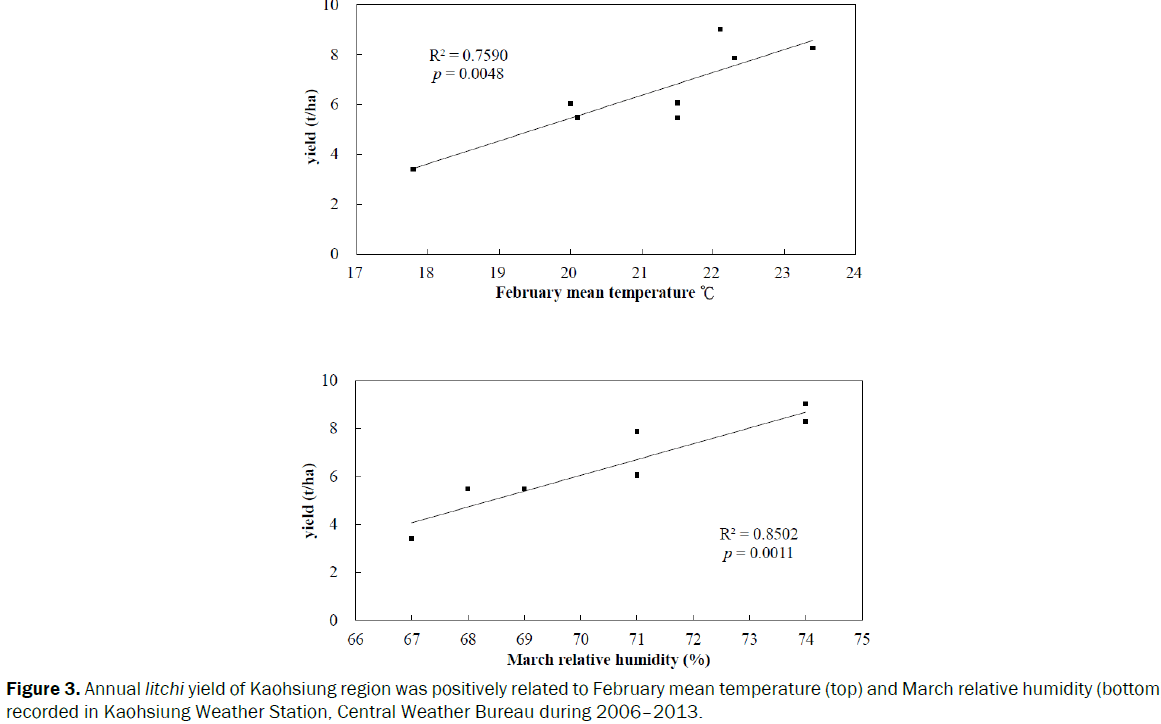 Scientists and growers pursue early-maturing cultivars for its high potential economic profits. The fewer low temperature requirements for floral induction in early-maturing cultivars, supposedly provides opportunities for growers to expand the planting regions, adapt the warming weather, and to adjust the production under artificial controls. Since the early-maturing litchi based on early flowering traits, some novel problems may raise along with the promotion of the early-maturing cultivars [10]. Firstly, flowering in early season might coincide with restricted pollen sources. In Taiwan, of extreme instance, inflorescence of the earliest harvested litchi cultivar, ‘Tainung No. 6 (Colorful Lychee)’, appears in November, flowers in December, and the fruit can be harvested in the following April. Therefore, keeping vegetative flushes with different maturation before floral induction is crucial to obtain flowers with different sex expression among panicles [28]. Otherwise, no other commercialized litchi cultivars flower at the same time, and pollination is practically impossible.

Secondly, advance the flowering time implies the trees are more likely to expose to cool temperatures, before and during flowering, and consequently negative responses for fruit production are more likely to occur [15]. Cool temperatures have been reported to cause suppressed anthesis, pollination efficiency, and ovule fertilization, and in the end result in unstable yield [9,10]. Lastly, recurrent flowering of female flowers is also a potential problem reducing yield and profits in certain early-maturing cultivars. Synthetic plant growth regulators perhaps mitigate the problems and improve litchi fruit set under specific concentration and application timing. However, application of the chemicals may be strictly governed by government rules or seriously considered by consumers. Other horticultural practices adapted and/or using certain cultivars for specific region is a more likely alternative option. Further knowledge on physiological responses and the plant-environment interaction accompanied with the early flowering phenology in early-maturing litchi is required in the future.

Authors sincerely thank for the fund supported by the Council of Agriculture of Taiwan (project no.: 105AS-9.4.5-CI-C3), the assistance of language inspection by Mr. Tzu-Yao Wei.