Styrene Butadiene Rubber composites with mixture of carbon nanotube and thermally reduced graphene were prepared and morphological, mechanical and dielectric properties of the composites were studied. Aim of this study is to understand the dispersion and reinforcement behaviour of hybrid filler in rubber matrix. Improved mechanical properties in the presence of graphene are due to the good dispersion and improved compatibility with the matrix. The formation of a mixed filler network showed a synergistic effect on the improvement of electrical as well as various mechanical properties. This method provides a simple route to enhance the dispersion of carbon nanotubes and to improve the electrical property of the polymer composites. It is concluded that introduction of thermally reduced graphene to CNT-SBR composites can improve the mechanical properties of the composites up to an optimum concentration of the graphene after that performance will be diminished due to the agglomeration of graphene.

Graphene is a two dimensional nanostructures with plate like geometry and has high aspect ratio, which is widely used a conducting reinforcing filler [9]. The extra ordinary improvement in the properties of the matrix on the in co-operation of graphene is due to its planar structure and high aspect ratio which leads to uniform stress transfer from nanoparticle to matrix while loading [10].

Even though carbon nano tube and graphene have outstanding mechanical, thermal and optical properties, they have their own draw backs. The major problems facing during the processing of CNT includes their tendency to form agglomerates due to van der waals force of attraction between individual tubes [11]. So uniform dispersion and homogeneous distribution of CNT in the polymer matrix is a challenging task. On the other hand graphene has a problem of its restacking property [12]. One of the trends is to integrate them into a hybrid structure, which would generate multifunctional materials. Given similarities in structure and physical properties between CNTs and graphene, their hybridisation would improve the properties of composites. The investigations on grapheme or carbon nanotube-based polymer composites are mainly focused on various polymers such as thermoplastics, epoxy and rubbers [13-18]. Conductive rubbers are critically needed in the fields such as ESD (electrostatic discharge) and EMI (electromagnetic interference) shielding materials, electronics packaging, telecommunication antenna, mobile phone parts and frequency shielding coatings for aircraft and electronics [19-21].

Aim of this study is to integrate hybrid structure of MWCNT and graphene and to investigate its effect on SBR matrix. Here we demonstrated synergies between two carbon allotropes CNT and graphene and offer simple strategy for processing by grinding both in agate mortar in which no chemical functionalization of CNTs is required and no organic solvents, toxic chemicals and surfactants are involved.

Styrene Butadiene rubber (Synaprene 1502) with a 25% styrene content was used for this study. MWCNT obtained from Nanocyl, Belgium was used as the filler. The diameter of the tubes ranges from 10 to 20 nm and the average length is 1.5 μm. The carbon content of the material is 90% and the rest is metal oxide (impurity). For the preparation of thermally reduced graphene, graphite powder with particle size <20 mm, concentrated sulfuric acid (H2SO4, 98%), potassium persulfate (K2S2O8), phosphorus pentoxide (P2O5), hydrochloric acid (HCl), potassium permanganate (KMnO4), hydrogen peroxide (H2O2, 30%) are purchased from Sigma Aldrich. The zinc oxide (ZnO), stearic acid, Tetramethylthiuram Disulfide (TMTD), 2, 2’DibenzothiazylDisulfide or 2, 2’-Dithiobisbenzo Thiazole (MBTS) and Sulphur used in this study was of industrial grades. All of the materials were directly used without further purification.

Graphite oxide (GO) was prepared according to the modified Hummers method [22]. The dried GO samples were thermally treated at 300ºC for 20 min in a tubular furnace to obtain thermally reduced graphene (TrG).

Preparation of the hybrids

Mixing of SBR and hybrid nano filler was done in laboratory scale Two roll mixing mill. The formulations of different mixes are given in the Table 1. Cure properties of the compounded samples were determined using Moving Die Rheometer at a temperature 160 ºC. Samples were then moulded by using an electrically heated Hydraulic press under a pressure of 120 bars at 160 ºC.

Table 2 and Figure 1 presents the results from the cure tests. These include optimum cure time (t90), scorch time (ts2), minimum torque (ML), maximum torque (MH), and Δ torque (ΔM) and cure rate index (CRI). The results of Maximum Torque and Torque difference displayed an increasing trend with the increasing of TrG loading in MWCNT/TrG hybrid containing nano composites. Maximum torque can be considered as a measure of the stock modulus of the materials [23] and the torque difference can be assumed as a measure of the extent of cross linking [24]. So the addition of the hybrid filler was beneficial to the cross-link density of the rubber. Here as the amount of TrG increases the network formation of MWCNT is very easy, this leads to uniform distribution of MWCNT in the matrix. This network hybrid filler restricts the mobility of polymer chains and thus stiffness of the composites increases. Cure time at low loadings of TrG is less than that of composite without TrG. But Cure time increases with increase in TrG loading. 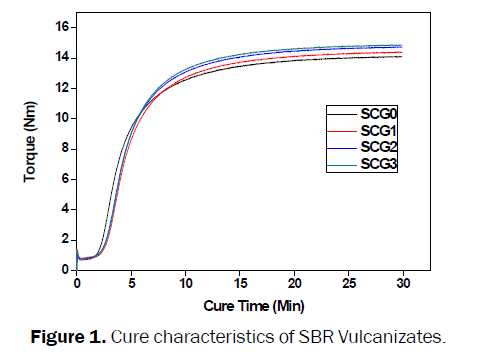 Figure 2 illustrates the typical stress–strain response SBR composites with the same content of MWCNT (1 phr) And varying amount of TrG. Comparing with pure SBR mechanical performance of hybrid filler composites are improved. Here tensile strength increases with increasing TrG loading upto a particular level then it is decreased. As shown in Figure 2 and in Table 3 tensile strength of SCG2 sample is increased by 49.5% compared to SCG0 sample. This is due to the continuous network formation of MWCNT with the aid of TrG as shown in Figure 3. Further addition of TrG reduces the tensile strength due to the formation of stress concentration centers in the composites. Because of the addition of TrG, CNTs are fully dispersed in the polymer matrix and the external tensile loads are effectively transmitted to the TrG–CNT filler within the polymer matrix. It is suggested from these results that both the reinforcement effect of TrG and CNT can be fully exploited in the TrG–CNT/ SBR composite.

Figure 2: Stress–strain response of SBR composites with the same content of MWCNT (1 phr) and varying amount of TrG.

Figure 4 shows the SEM micrographs of the fractured surface morphology of the filled SBR vulcanizates. The fractured surface of SCG0 (Figure 4a) is slightly rough with frequent ridgelines indicating the direction of crack propagation. The rougher surface observed in the SCG2 compound (Figure 4b) indicates that the matrix tearing has contributed to a higher tensile strength. With increasing TrG loading, the fractured surfaces show poor dispersion and adhesion of filler to matrix. There were agglomerations and significant detachment of filler from the filled compound. Greater detachment (as circled) can be seen in the rubber compounds with 0.5 phr TrG (Figure 4c). The formation of holes indicates that the resulting filler detachments have contributed to the reduction in tensile strength with increasing TrG loading. Hence, increasing TrG above 0.25 phr decreased the interaction between rubber-filler and led to poor filler dispersion. This observation validates the tensile results discussed earlier. 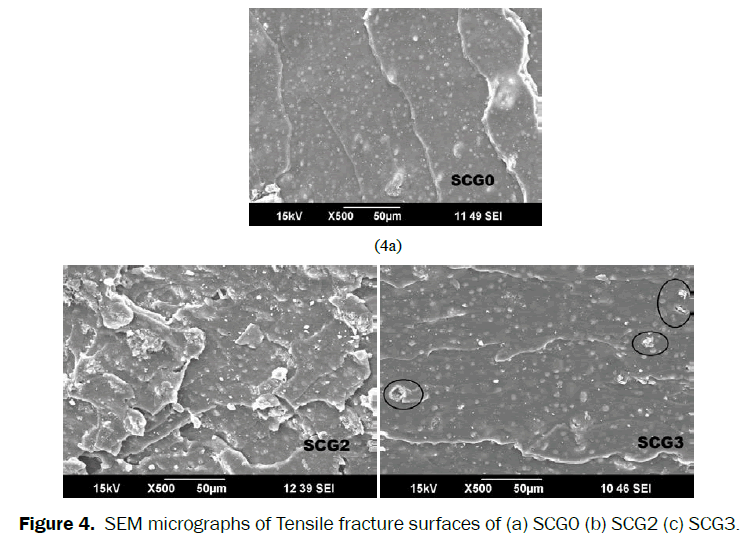 Variation of AC conductivity and dielectric permittivity as a function of TrG loading is given in Figure 5. Typically, the conductivity of the composites increases as the TrG content increases, which leads to the increase of dielectric permittivity [25,26]. The improved conductivity with TrG loading is due to the formation of conductive network CNT. In the case of SCG0 sample CNT particles are hardly contact with each other so continuous network formation of CNT is challenging. But in co-operation of TrG aids in the network formation of CNT and conductivity is improved. As TrG content increases, the adjacent GNS pieces start to contact with each other and form a conductive route. The improved εr may be attributed to the Maxwell−Wagner−Sillars (MWS) effect [25]. As the GNS content increases, MWS polarization is significantly improved. As a result, the dielectric permittivity of the resultant composites is enhanced quickly, which is quite normal in conductive fillers filled composites.

In summary we have fabricated conducting elastomeric SBR matrix integrated with MWCNT and TrG. Through the strong affinity between TrG sheets and CNTs, excellent dispersion of CNTs in the SBR matrix has been achieved at 0.25 phr loading of TrG. The SBR composite containing hybrid fillers show synergistic effects with superior mechanical properties than those of single CNT- SBR composite. Their distinctive architecture which could contribute to the favourable dispersion of CNTs and TrG which improves the load transfer between the reinforcements and SBR matrix. Improvement in mechanical and electrical properties is due to the synergistic dispersion between TrG and MWCNTs and the strong interfacial interaction between the hybrid fillers and the rubber matrix.