Paints are used to prolong the life of natural and synthetic materials and to protect it, it acts as a barrier against environmental conditions. Paints contain, pigment(s), binder, extender, solvent, and some additives. The pigment is used to give colour and opacity. Binders are matrices and are used to hold the pigment in place. Extenders have larger pigment particles to improve adhesion and to strengthen the film and save the binder. Solvent can be either organic solvent or water and is used a thinner and to dissolve paint components and make it uniform. Additives are commonly used to improve properties of the paint. Contents of an acrylic white matt emulsion paint is known to be as follows: Pigments 25%, Extender pigments 12%, Additive 5%, Solvent 44%, and Binder 14% [2].

Ingredients that provide a binding effect that holds the pigments together as dry film after the liquid solvent evaporates are called binders. Paint binders directly relate to paint performance including gloss retention or fade resistance, washability, adhesion, and scrub resistance. The binder in many emulsion paints is based on homopolymers or co-polymers of vinyl acetate and a propenoate (acrylic) ester. Other acrylic esters used as co-monomers with ethenyl ethanoate are ethyl propenoate, butyl propenoates, or a co-polymer of butyl propenoate and methyl 2-methylpropenoate [2]. Many commercial extenders are glycerin-based. In fact, glycerin is a already an ingredient in most acrylic paints. It gives the paint viscosity in addition to extending the drying time. You can heighten this effect by using glycerol mixed with water. Propylene glycol is also used for thicker application (Figure 1) [3].

Figure 1: Binders in various emulsion paints are based on co-polymers or homopolymers of a propenoate (acrylic) ester and ethenyl ethanoate (vinyl acetate).

Solvents are liquids that allow paint to be applied to the surface directly from the containers. Solvents allow the uniform combination of binders, considered solids, and pigments with the liquid solvent. A type of liquid solvent depends on the type of paint. For Alkyd paints, the liquid solvent is a thinner and is typically other type of solvent, for Latex paints, water is the main liquid solvent. More solids in the ingredients allow for higher quality paints, 35- 40%. How much paint will remain on the surface after liquid solvent is evaporated depends on the amount of solid in the paint formulation. The make-up of the solids affects the overall paint performance. A high solid by volume doesn’t always give a high-quality product (Figure 2) [3]. 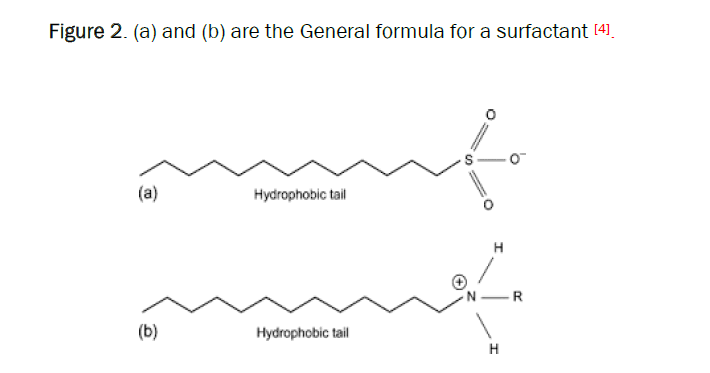 To modify the properties of paint and create additional performance properties, additives are used. The percent of additives in the formulation are known to be (01-1%). Additives may include algaecides, bactericides, anti-settling agents, driers, thixotropic agents, dispersants, silicones and crosslinkers (Figure 3). The molar mass of a polymer is greatly increased by using a crosslinker, silicates, causing the polymer to become a three-dimensional molecule and form a hard film to become resistant to chemical and the environmental conditions. Algaecides are used to protect exterior paint films from being disfigured from lichen, algae, and molds and bactericides are used to preserve water-based paints in their containers. To prevent pigment settling, anti-settling agents (surfactants) may be used. To accelerate drying time, driers are used. Thixotropic agents are known to be used to create jelly-like texture of the paint that would break down to liquid when paint brush is placed in it or when stirred. To improve weather resistance, silicones are used. To stabilize and separate pigments particles and prevent them from aggregating, dispersants are used [2]. 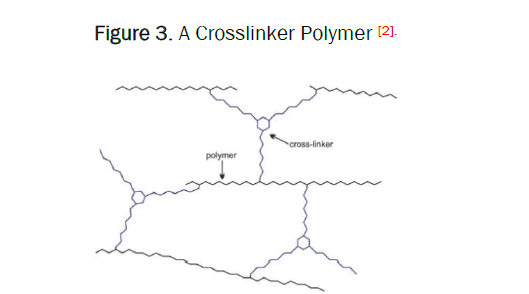 Water-borne emulsion paints are better for the environment than paints made with organic liquid solvents. Emulsion paints are making using emulsion polymerization, and monomers are dispersed in water as an emulsion. The molecular weight of the polymers produced are 500, 000–1, 000, 000 amu. For better application for paint, a solvent, thinner, can be used, and it’s either water or organic solvent [2].

Polymers are of high molecular substances that are made up of small low molecular weight chemical species held together by with a chemical bond called monomers. Polymers are used in coatings, polyurethane, plastics, and they are used as a binder in paints. The first polymers studied by chemists are natural or biological polymers such as protein, starch, and cellulose. Example of polymers would be polyethylene consist of ethylene monomers that are chemically bonded.

Polyethylene (Figure 4) is a polymer consisting of thousands of ethylene units. The name polyethylene is a name arousing from the prefix poly, which means ’many’ and the monomer name (ethylene). Synthetic polymers can be either condensation or addition polymers based on the method used in synthesizing them. In an addition polymerization, (Figure 5) many molecules are linked together by addition reaction. The monomer molecules must be unsaturated, containing multiple bonds that can undergo addition reactions. In a free radical additional, an initiator is used to prepare an addition polymer. An initiator is a compound that can produce free-radicals; organic compounds with O-O group (peroxides) are commonly used as initiators (Figure 6). When organic peroxides are heated RO-OR, the O-O bond breaks and free radical form (species having unpaired electrons). Alkene monomers would react with the free radical formed and produce another free radical which in turn react with another monomer molecule and produce another free radical molecule in a chain reaction. The reaction terminates when a free radical at the end of the chain react with another free radical. In a condensation polymerization, many monomer molecules are linked together, and a polymer is formed by a condensation reaction, where water molecule is removed by joining two molecules (Figure 7). Example for condensation polymers are polyesters and polyamides. The repeating monomer units are joint together by ester group in polyesters and by an amide group in polyamides [5].

Figure 4: Shown is a piece of polyethylene.

Figure 5: Example for addition polymerization of propene into polypropylene.

The technological and the physico-mechanical properties of various polymers is dependent on the branching the occurs in the polymer chain compared to linear polymer. Increase degree of branching in the polymer leads to decrease of strength properties. For example, branched polybutadiene, divinyl styrene, and other branched elastomers exhibit a low elasticity, breaking strength [6].

Natrosol 250- HHBR [9] with a molecular formula of C36H70O19 and a molar mass of 806.9 g /mol is known to be used as nonionic water thickener, a protective colloid, suspending agent, stabilizer and gives chemical, mechanical stability and controls rheology after, during and before application.

Water, with molecular formula of H2O and a molar mass of 18.902 g/mol and is used as a dispensing solvent for emulsion polymerization.

Sodium Bicarbonate, with a molecular formula of NaHCO3, [10] and a molar mass of 84.007g/mol is commonly used as a pigment and it dissolves immediately upon addition to the reaction mixture and a thick textured effect is the result, the more baking soda used, causes the paint to fluff up and become more textured.

Provichem [14] Sodium vinyl sulfonate is a surfactant in emulsion polymerization; it produces a copolymer with high water stability.

Buyl acrylate [15] a chemical compound with a molecular formula C7H12O2 and a molar mass of 128.17 g/mol is used as a monomer in copolymerization.

Vinyl acetate [16] with a molecular formula of C4H6O2 and a molar mass of 86.09 g/mol is used as the other monomer in homo-polymerization or copolymerization.

Potassium Persulfate [17], with a molecular formula of K2S2O8 and a molar mass of 270.33 g/mol is used as an initiator for free radical polymerization and is also known to be used as a bleaching agent.

Tertiary butyl hydrogen peroxide [18], with a molecular formula of C4H10O2 and a molar mass of 90.12 g/mol is commonly used as an oxidizing catalyst.

Hydrogen peroxide, with a molecular formula of H2O2 [19] and a molar mass of 34.0147 g/mol is known to be used as initiator in vinyl polymerization in homogeneous system.

Di butyl phthalate [22] with a molecular formula of C16H22O4 and a molar mass of 278.34 g/mol , is used in adhesives, printing inks and lacquers as a plasticizer, and it can be used with other phthalates for PVC compounds as a secondary plasticizer.

Formaline [23] with a molecular formula of CH2O and a molar mass of 30.031 g/mol is used as a preservative in some types of adhesives, such as vinyl and it may result as a by-product from some polymerization reactions. Biocide [24] is known to be a chemical substance that has a controlling effect on any harmful organism by a biological or a chemical mean.

Silquesit A-171, Vinyltrimethoxysilane [25], with a molecular formula of C5H12O3Si and a molar mass of 148.23 g/mol offers silanes and vinyl compounds some functionality by crosslinking organic polymers, the crosslinked Si-O-Si bond formed are highly resistant to UV light, other chemicals and exposure to moisture. It can also be added as a monomer in emulsion polymerization to form modified silane latexes, functioning as a crosslinker forming stable Si- O-Si bond linkages (Table 1) [26].

The Current Percentage of each component in the current formulation provided are Pigments (Sodium bicarbonate) 0.14%, Extenders (none used), Additives 6.4629%, Solvent 44.39% and Binders 49%.

The amount of surfactant used as an additive is 4.5%, which is very high and is causing a lower scrub resistance test for the current formulation (Figure 8). The addition of surfactants does not always have a positive effect on all properties. The water resistance of the coating can be decreased with surfactant addition since surfactants can be very water-soluble and will easily wash out of a coating. This problem of moisture resistance is particularly prevalent problem for art conservation, as well as problems with adhesion, loss of optical clarity, and dirt pickup caused by polyether surfactants in contemporary acrylic emulsion used in artworks bearing acrylic coats. While the type and amount of surfactant determine what properties will be affected, other chemicals in a paint can alter the overall effect the surfactants may have on the paint. Elasticity has been found to either increase or decrease in latex paints depending on the amount of TiO2 present.

The large amounts of surfactants are used as an additive, 4.5%, has a negative effect to the formulation, causing a low scrub resistance test result compared to reference. It’s recommended to avoid using copious amounts of surfactants and it’s also recommended to use pigments and extenders in order to form a firm protective layer and prevent the dissolution of paint film from the surface and to improve the scrub resistance test of the acrylic paint.

I would like to sincerely thank the Association of Consulting Chemist and Chemical Engineers for their efforts in making our profiles available for clients in the USA and worldwide.