A 22-fold multiplexed Luminex panel to detect medically important arboviruses was previously reported targeting small RNAs produced in vitro. Two synthetic biology innovations made this level of multiplexing possible. We asked if multiplexing was robust when nine targets were added from the Flaviviridae, Togaviridae and Bunyaviridae families. Assay sensitivities were 10, 80, and 270 genome-equivalents for California encephalitis, chikungunya and Murray Valley encephalitis viruses, indicating the robustness of multiplexing using these innovations. Amounts of these viruses in a single infected mosquito are typically higher. Further, the panel identified Murray Valley encephalitis virus in a single infected-mosquito pooled with (5-50) uninfected mosquitoes.

Globalization has widespread and growing impact on humankind [1]. Individual travel, group migration, product shipment, and other activities create a bio-dynamic global process that moves plants, animals, microbes, and other biota from locales where they are indigenous to other geographic regions where they may not be recognized [2]. In combination with other trends, including the growth in human populations, agriculture diversity, and urbanization, this process contributes to emergence of dangerous infectious diseases in new places [3].

This is well illustrated with arboviruses, which have expanded from their native locations to new parts of the globe, either through the geographic expansion of their insect vectors, especially domestic mosquitoes [4-7] or by infection of hosts already present (e.g., human encroachment on wild habitats and travel-associated infection). Therefore, diagnostic tools in North America must now target mosquito-borne arboviruses that are not endemic to North America.

Multiplexed assay platforms enable the simultaneous detection of nucleic acids (NA) from numerous pathogens, indigenous and not indigenous. Multiplexing reduces the time, labor and other costs relative to conventional singleplexed assays. In principle, multiplexes that can detect non-endemic pathogen nucleic acids could alert a health care provider of the presence of an emerging pathogen.

Table 1: Arboviruses in this study. All viruses were obtained from Centers for Disease Control and Prevention (CDC).*Titers were estimated by real-time (TaqMan) RT-PCR.

To obtain this high multiplexing, the platform exploited two new forms of DNA. One, an "artificially expanded genetic information system"(AEGIS), has nucleotides that complement no natural nucleotide [9]; here, the AEGIS nucleotides are "Z" and "P", which form an orthogonal Z:P pair. AEGIS primers cannot hybridize to any natural DNA, no matter how complex. The second, a “self-avoiding molecular recognition system” (SAMRS), has nucleotides that cannot bind to each other [10]. Therefore, SAMRS primers cannot interact with each other to create primer dimers.

In the “nested” architecture used, cDNA synthesis was initiated with chimeric target-specific primers. The chimeric primers had AEGIS nucleotides at their 5’-ends, while their target-specific segments contained SAMRS nucleotides at their 3'-ends. This allowed the chimeras (0.03 μM each) to initiate reverse transcription (RT) with SAMRS preventing primer dimer formation. Once initiated, common Forward and Reverse external primers containing AEGIS nucleotides (0.3 μM) carried out 35-50 cycles of PCR (Figure 1). Their AEGIS components ensured that no PCR resources were wasted by off-target binding of the external primers.

For detection on Luminex hybridization platform, AEGIS dZ was introduced into the amplicons by a process named "transliteration". Here, a reverse-primer extension reaction (RPER) exploited the ability of some polymerases to match AEGIS dZ oppositetemplatedG. The resulting GAZT sequences were captured on Luminex microspheres with probes containing AEGIS dP opposite dZ. This pairing greatly increased the sensitivity of pathogen detection of the Luminex xMAP assays [9]. RPER also favors to the accumulation of single-stranded (ss) biotinylated amplicon and facilitates the downstream Luminex hybridization. The assay overview is presented in Figure 1A, adapted from a previous publication [8]. 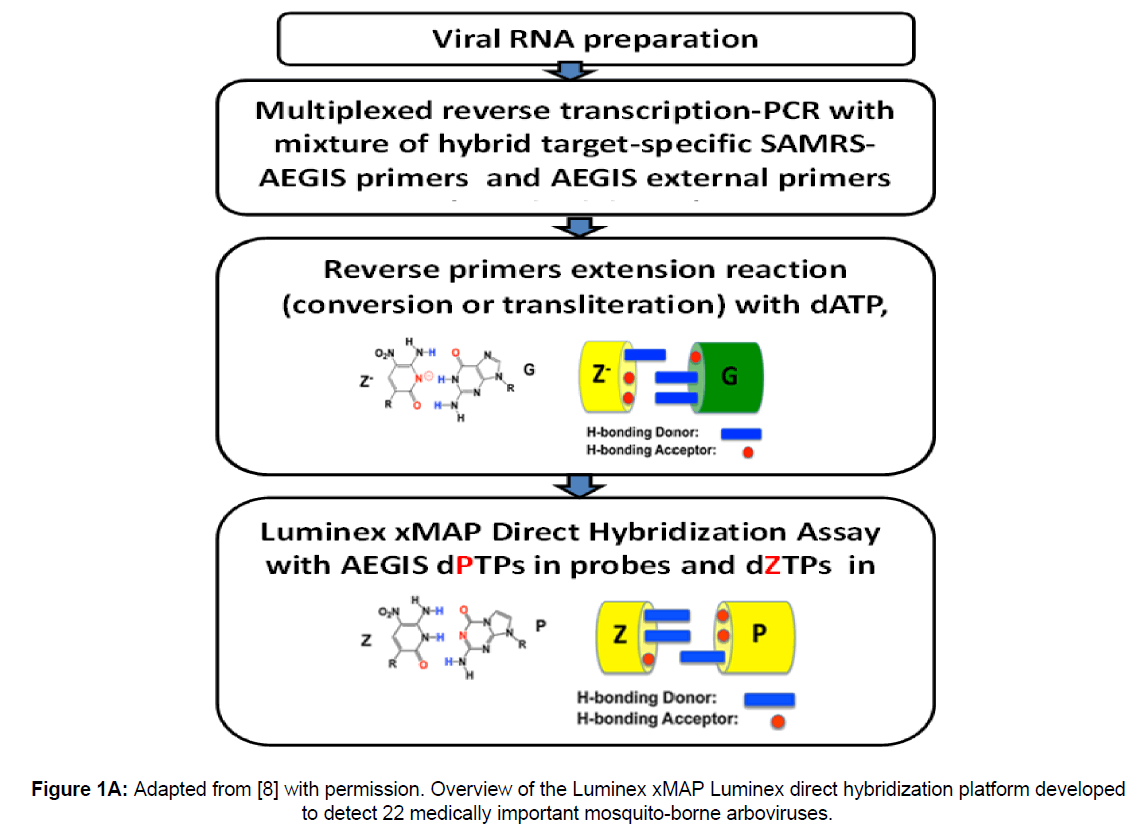 Here, we report extension of assay validation to include other full viral genomes from representatives of three viral families that are quite medically important (Table 1). Viruses from California serogroup (California encephalitis, LaCrosse encephalitis, Jamestown Canyon, Keystone, and Snowshoe hare viruses abbreviated as CEV, LACV, JCV, KSV, and SSHV, respectively, Bunyaviridae) are endemic across North America and are known etiological agents of neuroinvasive disease in humans and livestock [11,12]. Chikungunya virus (CHIKV from Togaviridae family) is an emerging pathogen that expanded its natural boundaries and invades to Americas [13,14], causing serious health problems in human population [15]. Japanese encephalitis virus (JEV, Flaviviridae) is a leading cause of encephalitis in Asia, with estimated 67,900 cases annually (a 20%–30% case-fatality rate and neurologic or psychiatric consequences in 30%–50% of survivors) [16]. Murray Valley encephalitis (MVEV, Flaviviridae) is the most important endemic arbovirus spread in Australia. It caused serious outbreaks of encephalitis in south-eastern Australia in the 1900s [17,18].

Each assay was performed with purified viral RNA (about 1/100 of viral stocks, Table 1) following established protocols [8]. All assays displayed clear, target-specific Luminex fluorescent signals, which were in the range of 3000-to-9000 median fluorescence intensity (MFI) units (50 to 150 over background, Figure 1B). The only cross-reaction was observed for SSHV and CE viruses: Positive signal registered from CVE target was about 50% of a specific SSHV signal. This was anticipated as these two viruses are closely related [11]. The panel limit of detection (LOD) was defined using serial dilutions of viral RNA for a representative of each family tested. The panel detected ca. 10, 80 and 270 genomes equivalents of CVE, CHIKV and MVEV respectively. The number of copies of these viruses in infected mosquitos is generally considerably higher than these LODs. The increases in RPER cycle numbers (up to 20-35) usually contributed to the assay sensitivity. 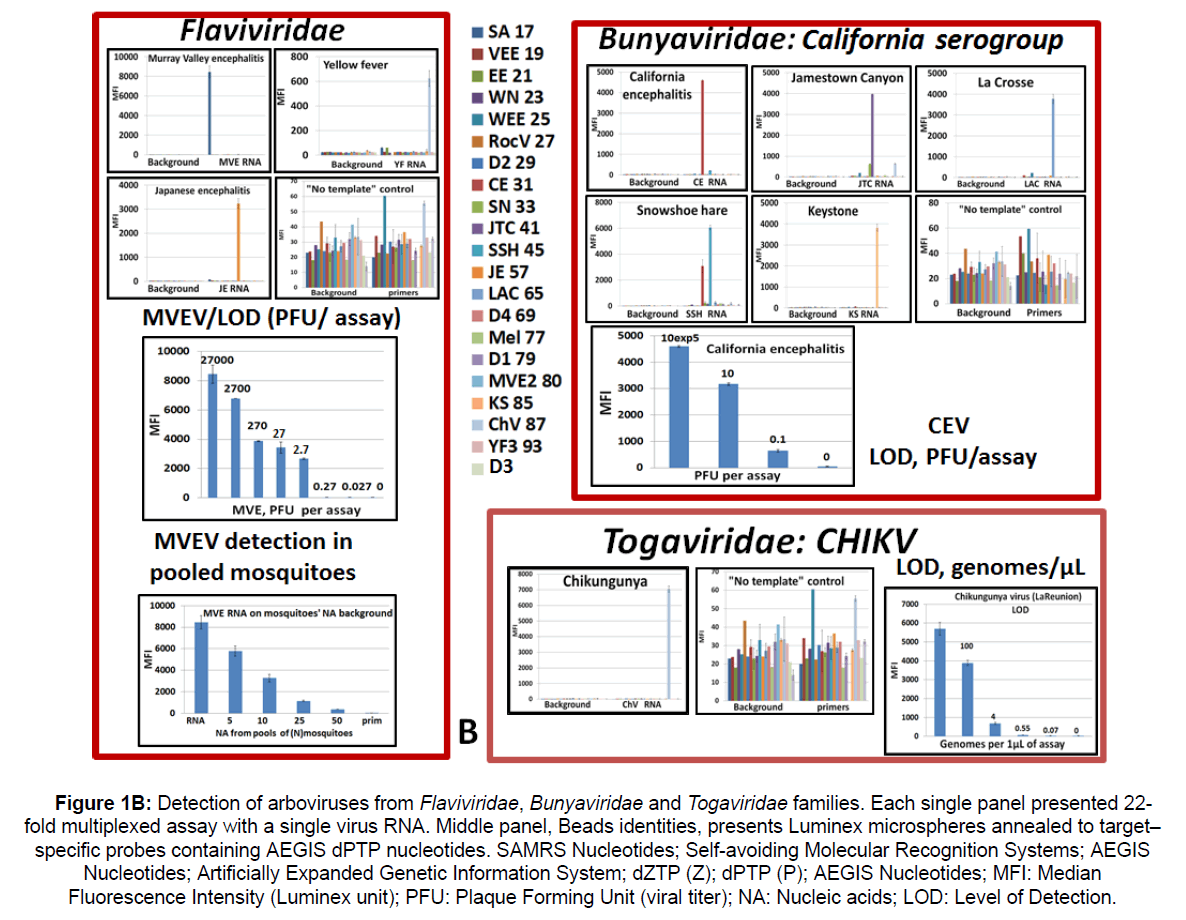 Thus, the diagnostic panel presented here may be a useful tool for mosquito monitoring and surveillance, as well, as high-throughput detection of pathogens in clinical samples.

Research reported in this publication was supported by the 43GM114967 NIH SBIR. The content is solely the responsibility of the authors and does not necessarily represent the official views of the NIH. We thank Bradley Eastmond and Keenan Wiggins for assistance with propagation of arboviruses. The arboviruses used in this study were kindly provided by the Centers for Disease Control and Prevention.

Several authors of this paper and their institutions own intellectual property associated with the assay, including SAMRS, AEGIS, and the transliteration/capture technologies. The reagents mentioned here are sold by Firebird Biomolecular Sciences, LLC, which employs the indicated authors and is owned by SAB.