Tapentadol (TPL) is a novel opioid pain reliever drug. The present work explains the development and validation of a simple and reliable liquid chromatographic method for the quantitative determination of Tapentadol (TPL) in bulk and in tablet formulation. Chromatography was carried out by reversed phase technique on a C-8 column with a mobile phase composed of 0.1 M Dipotassium Phosphate buffer (pH 6.8) and acetonitrile in the ratio of 50:50 v/v pumped at a flow-rate of 1.2 ml/min. The detection was carried out at 241 nm at the column temperature of 45°C. The method was evaluated according to ICH guidelines for the various validation parameters, such as linearity, accuracy, precision, LOD, LOQ, specificity, and Forced degradation studies. The analyte peak appears at 2.47 mins. The calibration curve for tapentadol was linear from 200 to 600μg/ml. The interday and intraday precision was found to be within limits. The proposed method has adequate sensitivity, reproducibility and specificity for the determination of tapentadol in bulk and its tablet dosage forms. LOD and LOQ were found to be 0.001 μg/ml and 0.003 μg /ml respectively. Accuracy (mean recovery: 100.00%) and reproducibility were found to satisfactory. In conclusion, this was a simple and effective method using HPLC to detect TPL in tablet formulation, which may be useful for routine quality control analysis.

Tapentadol, 3 - [(1 R, 2 R) - 3 - (dimethylamino) - 1- ethyl - 2 - methyl - propyl] phenol hydrochloride (TPL), differs distinctly from previously characterized centrally acting analgesics in that it has a peculiar dual mechanism of action. For this reason, a new pharmacological class has been proposed, namely mu opioid receptor agonist and noradrenaline reuptake inhibitor (MOR-NRI) [1,2] (Figure 1). Both these mechanisms of action, MOR and NRI, contribute in a complementary way to TPL’s efficacy in nociceptive and neuropathic pain conditions [3]. This combination of effects not only provides effective analgesia in a broad range of acute and chronic pain conditions, but it provides an ‘opioid-sparing’ effect, i.e. to lower the dose of TPL required to produce a given level of analgesia thanks to the contribution of the NRI component to its analgesic effects. As a consequence, also the occurrence and intensity of opioid-induced side effects should be significantly reduced. Indeed, recent clinical studies have indicated that TPL has a very low incidence of adverse effects (nausea, emesis, constipation [4,5,6]), but a similar rate of analgesic efficacy if compared to equianalgesic doses of other classical opioid drugs (oxycodone [7,8,9,10,11], morphine [11]). The analgesic properties of TPL reside in a single enantiomer and do not require metabolic activation, which is beneficial in that the relative contributions of the two mechanisms, MOR activation and NRI do not vary during metabolic transformation. These features make TPL an attractive alternative to traditional opioid analgesic with widespread potential applications in both human and veterinary medicines. 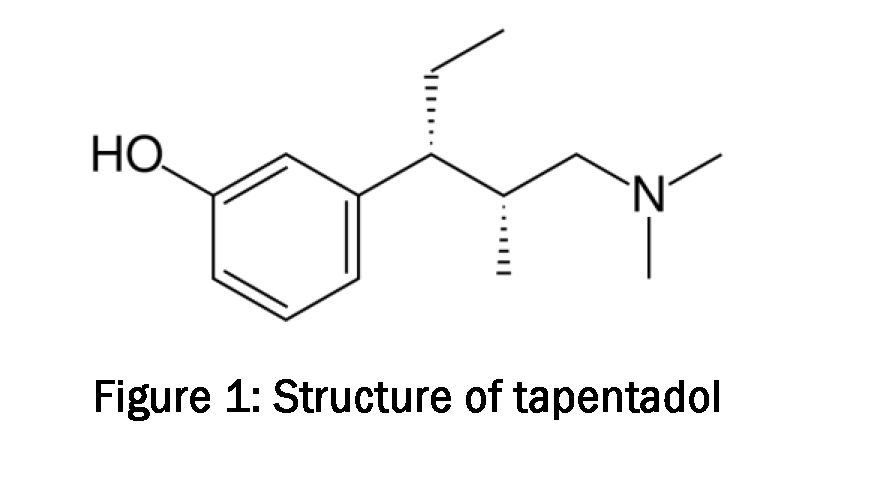 To date, only two LC–MS methods to detect TAL in biological matrices (urine [12] and urine and oral fluid [13]) have been reported in the literature, however there have been no studies on HPLC method for detection of TPL in pharmaceutical formulations. To address this shortfall, the aim of the present paper was to develop and validate a new simpler methodology to quantify TPL in tablet formulation using HPLC with photo diode array detection (HPLC–PDA).

Pure powder (>99.9% purity) of TPL was supplied by Hetero drugs ltd, Hyderabad. The tablet dosage form of TPL was purchased from Anukar Pharmacy, Hyderabad. HPLC grade acetonitrile (ACN) were purchased from Scharlau (Sentmenat, Spain). Analytical grade Dipotassium Phosphate buffer was obtained from SD Fine (Mumbai, India). HPLC grade water was obtained by distilling deionised water produced by a Milli-Q millipore water system (Milford, MA, USA). All the other reagents and materials were of analytical grade and supplied from commercial sources. The aqueous and organic components of the mobile phase were mixed and degassed under vacuum by the HPLC. The LC mobile phases were filtered through 0.2 μm cellulose acetate membrane filters (Sartorius Ste-dim Biotech S.A., Aubagne Cedex, France) with a solvent filtration apparatus.

A mixture of 0.1 M Dipotassium Phosphate buffer (pH 6.8, adjusted with ortho phosphoric acid) and acetonitrile in the ratio of 50:50 %v/v was used as mobile phase. Mixed solvents were filtered through 0.2 μm cellulose acetate membrane filters (Sartorius Ste-dim Biotech S.A., Aubagne Cedex, France) with a solvent filtration apparatus, degassed used as mobile phase. Same was used as diluents for the preparation of drug solutions.

To carry out the sample solution (assay of pharmaceutical preparation), 20 tablets were taken and weighed individually, obtaining the average weight of these tablets, finally they were ground. An appropriate portion of this powder, equivalent to 100mg of TPL was weighed and placed in a 50ml volumetric flask, dissolving it with 25ml of mobile phase. This solution was sonicated for 15 min to dissolve and remove the entire active from the tablet. Once the time had elapsed, it was diluted up to 50 ml with additional mobile phase. 5 ml of aliquot was taken and transferred to volumetric flask of 25 ml capacity and volume was made up to the mark with the diluent. This solution was used for the estimation of TPL (400μg/ml).

Data collected in this study were analyzed using JMP statistical software package by one-way analysis of variance (ANOVA). Univariate linear regression analysis using least square method was applied to test the fitted model. Correlation coefficient was calculated and the results of the statistical analysis were considered significant if their corresponding p-values were less than 0.05.

When methanol and acetonitrile were used in initial scouting, it was observed that acetonitrile was found to be better in terms of resolution and peak shapes as compared to methanol. Therefore, acetonitrile was used as an organic modifier for method development. We have avoided strongly acidic and strongly basic buffer as they were non-volatile and nonameanable with PDA detector. Ammonium acetate buffer (10 mM) was chosen, but peak shapes and tailing factor were found to be unacceptable for analyte. The effect of different pH and mobile phase composition were also tried to improve the resolution and peak symmetry. The peak shape and symmetry was found to be improved with dipotassium phosphate buffer. In addition to commonly using C18 column, C8 stationary phase was also selected. In an attempt to improve peak symmetry and resolution on C18 column, various combinations of Dipotassium phosphate buffer and ACN was used in different proportions. pH of the buffer was adjusted to 6.8 with ortho phosphoric acid. But still the TPL peak was broader and analyte was eluting at 10 mins. The C8 column was found to be more suitable because of less tailing with improved resolution and considerable increase in the retention time (2.4 min) of TPL (polar compound). Therefore, C8 column with 0.1 M dipotassium phosphate buffer (pH 6.8) and ACN at a ratio of 50:50 v/v was selected for further studies Table 1.

Table 1: Optimized HPLC conditions for the estimation of TPL

Specificity is the ability to assess unequivocally the analyte in the presence of components which may be expected to be present. Typically these might include impurities, degradants, matrix, etc. The selectivity of assay was determined by placebo analysis. Placebo of tablet formulation containing all the normal ingredients except TPL was prepared for this study. They were treated in the same manner as the normal samples, and they were injected for study of other ingredient interference on the selectivity of the TPL separation. The chromatograms obtained from placebo (Figure 2), TPL standard solution were shown in Figure 3 and Figure 4. The peak purity was more than 99.0%. 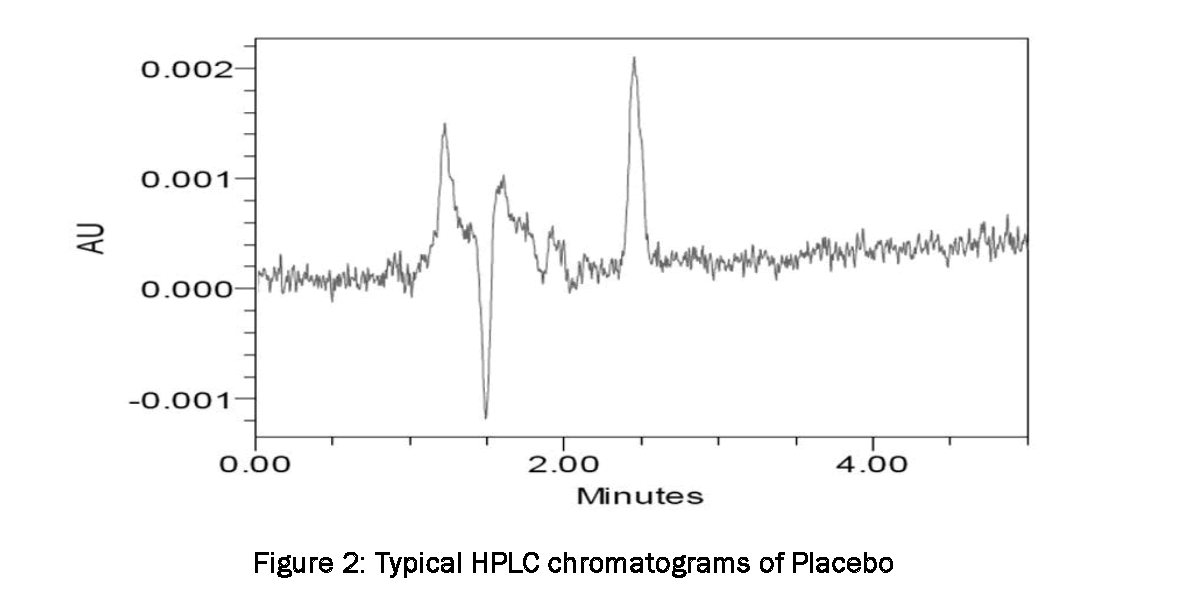 The linearity of an analytical procedure is its ability (within a given range) to obtain test results which are directly proportional to the concentration (amount) of analyte in the sample. The calibration curve constructed for TPL was linear over the concentration range of 200 – 600 μg/ml. Peak areas of TPL were plotted against TPL concentration and linear regression analysis performed on the resultant curve. The samples were analyzed in triplicates at all concentrations. Calibration curve was constructed and found that correlation coefficient value of the studied drug was observed to be R2 0.999. Typically, the regression equation for the calibration curve was found to be y = 21349x + 32996 (Table 2)

The precision of an analytical procedure expresses the closeness of agreement (degree of scatter) between a series of measurements obtained from multiple sampling of the same homogeneous sample under the prescribed conditions. Precision of the assay was investigated with respect to both repeatability and reproducibility. Repeatability was investigated by injecting six replicate samples of 400 μg/ml standard where % R.S.D value was found to be 1.04. Inter-day precision was assessed by injecting the same concentration over 3 consecutive days, resulting in mean % R.S.D. of 1.08%. The ruggedness of the method was assessed by comparison of the intra- and inter-day assay results for TPL that has been performed by two analysts. The %R.S.D values for intra- and inter-day assays of TPL in the cited formulations performed in the same laboratory by the two analysts did not exceed 2%, thus indicating the ruggedness of the method. The mean retention time of TPL was 2.4 min with % R.S.D. of 1.2%. The data was shown in Table 3. 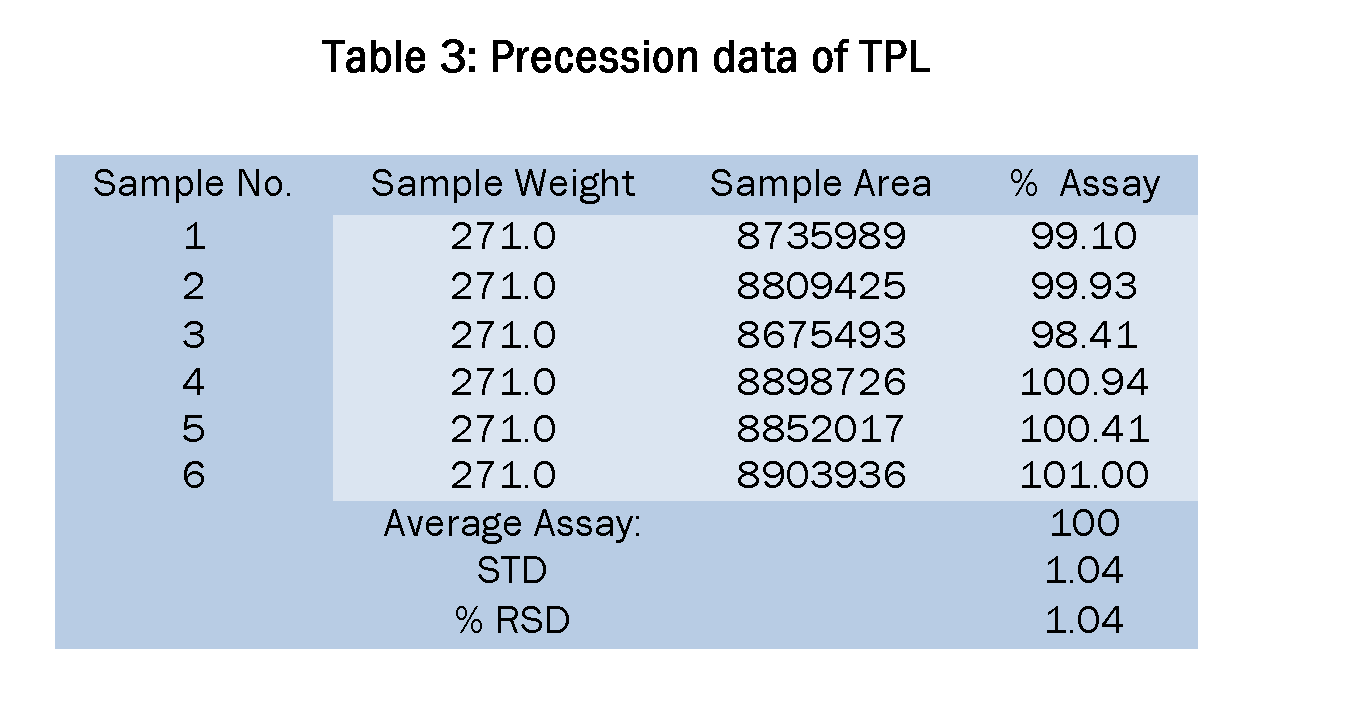 The accuracy of an analytical procedure expresses the closeness of agreement between the value which is accepted either as a conventional true value or an accepted reference value and the value found. Accuracy of the method was determined by investigating the recovery of drug at three levels 200 μg/mL, 400 μg/mL, and 600 μg/mL from placebo mixtures (lactose, maize starch, mannitol, calcium hydrogen phosphate, magnesium carbonate, gelatin, polyvidone micro crystalline cellulose, magnesium stearate, silicon dioxide, titanium dioxide) spiked with the API solution. Each concentration was analyzed in triplicate (Table 4).

The robustness of an analytical procedure is a measure of its capacity to remain unaffected by small, but deliberate variations in method parameters and provides an indication of its reliability during normal usage. The robustness of the developed method was determined by analyzing the samples under a variety of conditions of the method parameters, such as flow rate, pH of the buffer and temperature. Variation of the pH of the mobile phase (0.1% ortho phosphoric acid), flow rate by 1.5 mL/min and temperature by 50 °C did not have significant effect on chromatographic resolution in HPLC method.

Twenty tablets each of TPL were weighed individually and crushed, the powder equivalent to 100 mg was weighed and diluted with mobile phase, sonicated for 15 min and further dilutions were made with mobile phase to obtain concentrations within the linearity range (200-600 μg/ml). All the samples were filtered through whatmann (polypropylene, 0.45 mm) syringe filter, before injecting the samples into the HPLC instrument. The assay results were shown in Table 2.

A validated HPLC analytical method has been developed for the determination of TPL in API and dosage forms. The results of stress testing undertaken according to the International Conference on Harmonization (ICH) guidelines reveal that the method is selective and stability indicating. The proposed method is simple, accurate, precise, specific, and has the ability to separate the drug from degradation products and excipients found in the tablet dosage forms. The method is suitable for the routine analysis of TPL in either bulk API powder or in pharmaceutical dosage forms. The simplicity of the method allows for application in laboratories that lack sophisticated analytical instruments, such as LC–MS or GC–MS. These methods are complicated and costly rather than a simple HPLC-UV method. In addition, the HPLC procedure can be applied to the analysis of samples obtained during accelerated stability experiments to predict expiry dates of pharmaceuticals.

The authors are grateful to Hetero drugs ltd, Hyderabad, India for proving a gift sample of Tapentadol.