The Adenomatoid Odontogenic Tumor (AOT) is a benign, non-neoplastic lesion with a slow but progressive growth. Because of the slow and confined growth of the lesion, it has been classified as a hamartoma rather than a true neoplasm. It occurs in both intraosseous and peripheral forms. The intrabony variant comprises of a follicular and an extrafollicular type. Radiographically the follicular type is associated with an impacted tooth and constitutes about 73% of the lesions, and the extrafollicular type is not associated with an unerupted tooth and accounts for about 24% of the tumors appearing as a unilocular radiolucency. Here we report the case of a large extrafollicular AOT involving the right parasymphysis and body of mandible in a 35 year old female patient.

A 35 year old female patient visited the department of Oral Medicine and Radiology with a chief complaint of swelling in the lower right back teeth region since 1 year. Patient had undergone extraction of teeth in the same region one month back due to mobility, following which she complained of pain in the swelling which was mild, intermittent and localized. On extra oral examination, a well-defined swelling was evident in the right parasymphysis and body of mandible measuring about 2 × 4 cm; superiorly the swelling extended till the level of corner of mouth to the lower border of mandible inferiorly and anteriorly about 1 cm from the midline to about 3 cm in front of the angle of mandible posteriorly. The skin over the swelling appeared normal. The swelling was tender on palpation, hard in consistency, non-compressible, non-depressible and immobile and no discharge was elicited. On intraoral examination, healing extraction socket were noted i.r.t mandibular right first and second premolars and first molar, with buccal vestibular obliteration extending from the distal aspect of mandibular right canine to the mesial aspect of second molar. The mandibular right canine and second molar were grade II mobile, expansion of the buccal and lingual cortical plates was noted (Figure 1). Based on the history and clinical examination a differential diagnosis of ameloblastoma, central ossifying fibroma, adenomatoid odontogenic tumor and calcifying epithelial odontogenic tumor was given. 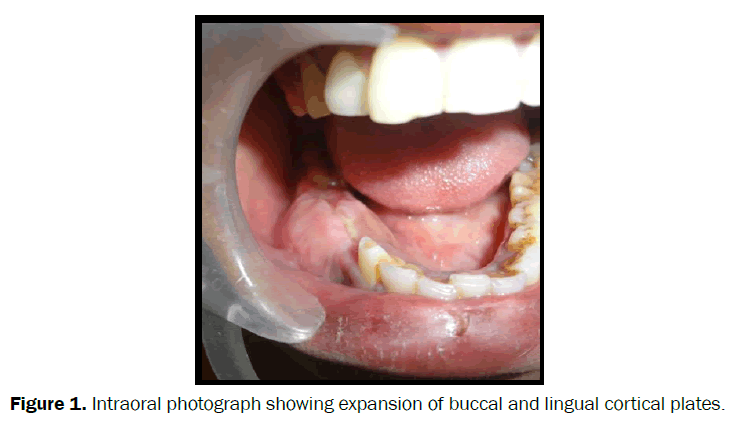 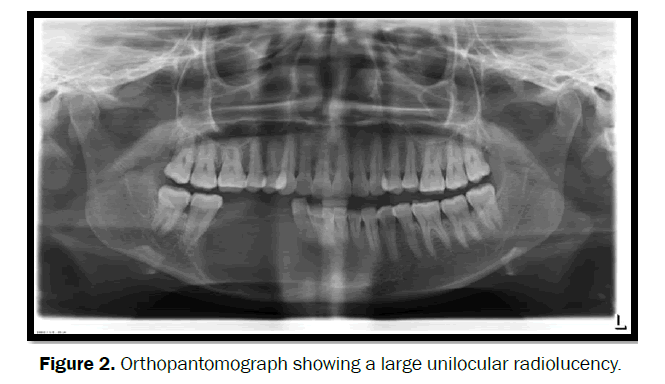 An incisional biopsy was done and on histopathological examination, the sections revealed columnar to cuboidal cells with dark oval shaped nuclei and few cells exhibiting reversal of polarity, suggestive of odontogenic cells. These odontogenic cells are arranged in sheets, rosette pattern and duct like pattern with little eosinophilic tumor patterns, within the connective tissue stroma (Figure 4). These features are suggestive of Adenomatoid Odontogenic Tumor. Based on the clinical, radiographic and histopathological features a final diagnosis of extrafollicular AOT was made.

Adenomatoid Odontogenic Tumor is considered to be a benign, non-aggressive odontogenic tumor of epithelial tissue origin. The 1992 WHO classification defines the AOT as “A tumor of odontogenic epithelium with duct like structures and with varying degrees of inductive change in the connective tissue. The tumor may be partly cystic, and in some cases the solid lesion may be present only as masses in the wall of a large cyst. It is generally believed that the lesion is not a neoplasm” [1].

The pathogenesis of AOT is controversial; the tumor cells are believed to be derived from enamel organ epithelium, while some investigators have suggested that the lesion arises from remnants of dental lamina [2]. Cases of AOT arising from the cystic lining of Dentigerous cyst have been reported [4,5]. A case of hybrid odontogenic tumor composed of calcifying cystic odontogenic tumour (CCOT), a solid multicystic ameloblastoma (A-S/M) and an Adenomatoid odontogenic tumour (AOT) has also been reported in the anterior part of mandible in a 64 year old Chinese woman [6].

The tumor usually occurs in the second decade of life and is rarely seen over the age of 30 years [7]. It is more common in females than males with a female: male ratio of 1.9:1 [1]. The tumor has an increased tendency to occur in the anterior portions of the jaws, usually associated with an impacted canine and occurs twice as often in the maxilla than the mandible and seldom exceeds 3 cm in greatest diameter [2]. The involved teeth are commonly impacted and adjacent teeth may be slightly displaced, and root resorption is not a usual finding [4,8]. However, cases of Extrafollicular AOT causing root resorption of the associated teeth have also been reported in both the maxilla and the mandible [9,10]. The present case is unique in that a large tumor measuring about 3 × 5 cm occurred in a 35 year old patient involving the symphysis, right parasymphysis and body of mandible causing expansion of the buccal and lingual cortical plates and resorption of the apical third of the roots of the right canine and lateral incisor.

The clinical and radiographic features of an Extrafollicular AOT can be sometimes evasive; and although the Extrafollicular AOT is an uncommon tumor which occurs less frequently than its follicular variant, it should be included in the differential diagnosis of other odontogenic tumors appearing as unilocular radiolucencies.