Friend Recommendation on Social Network Site Based on their Life Style

Social network sites attracted millions of users. In the social network sites, a user can register other users as friends and enjoy communication. Existing social networking sites recommend friends to users based on their social graphs, which may not be appropriate. In proposed system friends recommends to users based on their life styles instead of social graphs. It done by means of sensor rich smart- phone serve as the ideal platform for sensing daily routines from which people’s life styles could be discovered. Unsupervised learning method is used. Achieve an efficient activity Recognition and reduce the false positive of Friend Recommendation. Friendbook integrates a feedback mechanism. Finally the results show that the recommendations accurately reflect the preferences of users in choosing friends.

Real life friends play an important role in off-line social events while most virtual on-line friends can fulfill such social function. Twenty years ago, people typically made friends with others who live or work close to themselves, such as neighbors or colleagues. Friends made through this traditional fashion as G-friends, which stands for geographical location-based friends because they are influenced by the geographical distances between each other. Existing social networking services recommend friends to users based on their social graphs, which may not be the most appropriate to reflect a user’s preferences on friend selection in real life, Friend book discovers life styles of users from user-centric sensor data, measures the similarity of life styles between users and recommends friends to users.

Existing social networking [2] services recommend friends to users based on their social graphs, which may not be the most appropriate to reflect a user’s preferences on friend selection in real life.The supervised learning algorithms is used. Privacy is insensitive. Match maker is another recommendation system which recommend user to watch the shows that his social network friends have watched or is watching. Match maker recommend the user to become friends with someone who is matching same TV character and is friend with another users matching TV character.

In our day to day life we do many course of activities like walking, talking, eating, etc. which have some meaningful sequence. This course of activities altogether having meaningful sequence gives us the user’s life style. Consider office work life style (Figure 1), it consists of walking, talking, traveling, typing, etc. It use different type of sensors of android mobile phone like microphone, camera, GPS, gyroscope, accelerometer to this course of work. Many challenges are there to capture accurate life style from sensor data, to calculate user’s life style activity. Data collection module Collects one’s activity based on the raw data from sensing phase.It identifies status or action at a short time period.The Motion activity are Sitting/Walking/Running/Riding/Driving.Then the Life Style Analysis and Indexing is used to improve recognition accuracy, features are extracted to characterize the data. Tested several features such as mean, median .It is calculated on the basis of data obtained from sensor rich smart phones. Then the life style indexing module puts the life styles of users into the database in the format of (life-style, user) instead of (user, life-style). A friend-matching graph cans be constructed accordingly by the friend-matching graph construction module to represent the similarity relationship between users’ life styles. The impacts of users are then calculated based on the friend-matching graph by the user impact ranking module. The user query module takes a user’s query and sends a ranked list of potential friends to the user as response. The system also allows users to give feedback of the recommendation results which can be processed by the feedback control module. With this module, the accuracy of friend recommendation can be improved.

In our system, we are going to use motion sensors like accelerometer, gyroscope and various other sensors like camera, microphone, GPS etc. The data obtained from these sensors is always noisy. Hence it needs to be processed to obtain some information from it so that we could use it to recognize the activities of a user. Various filters and techniques are used to improve the recognition [3] accuracy. In case of ambiguity, the user will be prompted to enter the activity he/she is performing.

The content of the user profile are scanned and then the contents are classified according to the areas. Then the areas are ranked based on the probability of their frequency. The top most ranks are considered and the friend suggestion is done based on the similarity of the ranks.

for all user in pool do

adjust recom and pop the tail

To support performance optimization at runtime, we also integrate a feedback control mechanism into Friend book. After the server generates a reply in response to a query, the feedback mechanism allows us to measure the satisfaction of users, by providing a user interface that allows the user to rate the friend list.

In this section the performance evaluation of Friendbook on both small-scale field experiments and large-scale simulations.

We first evaluate the performance of, Friend book on small-scale experiments. Eight volunteers help contribute data and evaluate our system. Demonstrates the profession of these users. Most of them are students, while the rest include a businessman, an office worker, and a waitress. Each volunteer carries a Nexus smartphone with Friend book application installed in advance. They are required to start the application after they wake up and turn it off before they go to bed. Aside from this, we do not impose any additional requirement on the usage of the smartphone. For example, we do not require them to carry the smartphone all the time during the day or attach the smartphone [4] to some special parts of the body. It is worth noting that some of the eight users are already friends before experiments but some of them are not. In fact, some strangers within the group become friends afterwards. However, strangers living far away from each other do not become friends although they choose each other as a friend at the friend recommendation phase. This also motivates the usage of GPS information into the system to improve the recommendation accuracy.

We perform simulations to further evaluate performance of Friendbook when the scale of the system is large. Our friend recommendation method is based on life styles extracted from sensors on users’ smart phones, which is quite different from existing friend recommendation methods. To the best of our knowledge, there is no real data set that can be used for a large-scale performance evaluation.

Recommendation systems that try to suggest items (e.g., music, movie, and books) to users have become more and more popular in recent years. Amazon recommends items to a user based on items the user previously visited, and items that other users are looking at. Bian [5] presented Match Maker, a collaborative filtering friend recommendation system based on personality matching. Kwon and Kim proposed a friend recommendation method using physical and social context. Yu et al. recommended geographically related friends in social network by combining GPS information and social network structure. Hsu et al. [6] studied the problem of link recommendation in weblogs and similar social networks, and proposed an approach based on collaborative recommendation using the link structure of a social network and content-based recommendation using mutual declared interests. Gou et al. [5] proposed a visual system, SFViz, to support users to explore and find friends interactively under the context of interest, and reported a case study using the system to explore the recommendation of friends based on people’s tagging behaviors in a music community. These existing friend recommendation systems, significantly different from our work, as we exploit recent sociology findings to recommend friends based on their similar life styles instead of social relations. The MIT Reality Mining project and Farrahi and Gatica-Perez [6] tried to discover daily location-driven routines from large-scale location data. They could infer daily routines such as leaving from home to office and eating at a restaurant. However, they could not discover the daily routines of people who are staying at the same location. For instance, when one stays at home, his/her daily routines like “eating lunch” and “watching movie” could not be discovered if only using the location information.

To support performance optimization at runtime, we also integrate a feedback control mechanism into Friendbook. After the server generates a reply in response to a query, the feedback mechanism allows us to measure the satisfaction of users, by providing a user interface that allows the user to rate the friend list. . The period for collecting data usually takes at least one day. Longer time would be expected if the user wants to get more satisfied friend recommendation results. After receiving a user’s request (e.g., life documents), the server would extract the user’s life style vector, and based on which recommend friends to the user. The recommendation results are highly dependent on users’ preference (Figure 2). 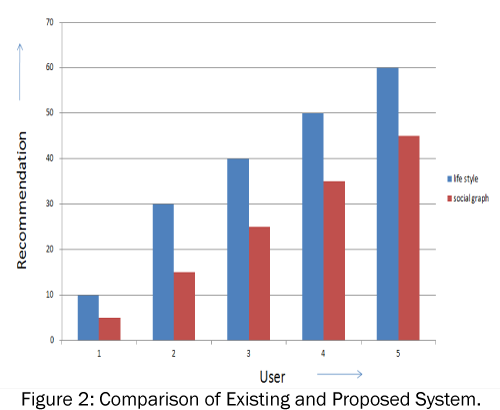 Long time ago, people usually made friends with others on the basis of their geo-graphical locations such as people working in their once or living in their neighborhood. The emergence of various social networking sites has given a revolutionary approach of making friends. There are various ways to group people or become friends with somebody on social networks. People can easily make friend on the social networks. But some time recommendation is not as per user’s consideration. Most of the time, habits or life style is the most prominent factor between two users friendship but is not widely used by most of the social networks recommendation systems. This is because user’s life style is difficult to capture through web actions. So by considering this, we are attempting to use a handy tool like mobile phone to capture and model user’s lifestyle and recommend friends on the basis of similarity between two users life style. Most of the time user’s lifestyle is based on the activities that performed in their daily life. Our daily life is characterized by numerous activities. This recommendation system allows users to share their lifestyle along the social network. On the basis of this lifestyle system recommends the appropriate friend to the user. Which surely helps user to find there friend on the social network.