Flares are energetic materials, which can yield thermal signature that can to interfere with infrared guided missiles. Flare thermal signature should be similar to aircraft but with higher intensity; this signature depends on exothermal reaction as well as the chemical nature of combustion products. Aluminum is the most common reactive metal fuel in use in energetic systems as it can offer high heat output (32000 J/g) as well as superior chemical stability. In this study, different flare formulations based on aluminum as a fuel, fluorocarbon polymer (Teflon) as an oxidizer, and Viton as a binder (with fuel percentage from 40:70 wt%) were developed by granulation and subsequent pressing. The spectral performance of developed formulations was evaluated to the thermal signature of aircraft jet engine using (FT-MIR 2-6 μm) spectrophotometer. The thermal signature of jet engine was characterized with two characteristic peaks over α (2-3 μm) and β (3-5 μm) band; this signature was correlated to black body emission by the hot nozzle at 690°C. The developed flares offered similar thermal signature but with higher intensity. Aluminum/Teflon/Viton (ATV) flare, with 50 wt% Al, offered an increase in the intensity of α band and β by 6 and 1.5 times respectively. The developed ATV flare offered characteristic intensity ratio Æ (Iα/Iβ) (the main spectral parameter) of 0.73; this value was found to be in good accordance with literature. Quantification of infrared emitting species as well as combustion temperature was conducted using the ICT thermodynamic code. ATV flare (50 wt% Al) offered the highest percentage (78.1 wt%) of AlF the main IR emitting species as well as 12.1 wt% of C soot which is an ideal black body emitter. This is manuscript would open the route for the development of flares with tailored spectral performance.

Infrared (IR) guided missiles represent the major threat to military aircrafts; they resulted in 90% of aircraft damage [1]. IR seekers can detect IR radiation; subsequently it can identify the aircraft as a potential target [2,3]. Aircraft thermal signature is generated via several components including: the metal skin, jet engine, and exhaust. The aircraft fuselage emits between 8-10 μm, due to sun radiation or air friction. Emission over the range of 3-5 μm is resulted from hot exhaust gases (H2O, CO, CO2). Hot jet engine emits in the range of 2-2.5 μm (Figure 1) [2]. 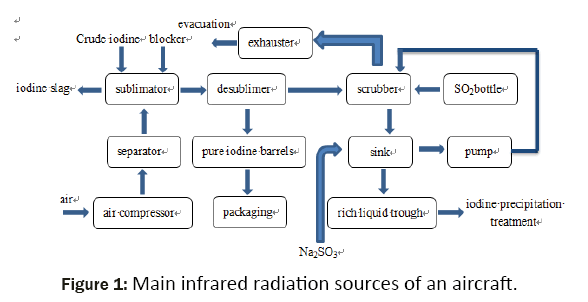 Heat-seeking missiles search for radiation released from the aircraft over α (2-3 μm) and β (4-5 μm) bands with relative intensity ration [4]. Decoy flare is the main countermeasure technique that can be employed to protect aircraft against thermal detectors [5].

Standard flares consist mainly of Magnesium (fuel), Teflon (oxidizer), and Viton (binder); they are commonly known as MTV flares [2,6]. Nowadays, aluminum is the fuel of interest for different pyrotechnic formulations due to its high heat output (32000 J/g) and high chemical stability [7-10]. While aluminum metal fuel can develop a protective oxide layer offering extended storage time without loss of reactivity (Figure 2); magnesium fuel suffers from lack of chemical stability. Mg is susceptible to acid and humidity with the formation of Mg(OH)2 with loss of reactivity [11].

Aluminum can act as high energy density material; it has found wide applications in different energetic systems [12]. Straight way to increase the overall released energy, can be achieved by incorporating reactive metal fuel (i. e. Al) into the energetic system [13-15]. Aluminum can react not only with free oxidizing element (oxygen/fluorine) available from oxidizer; but also it can react inert gasses adding substantial heat output [16].

For IR emitting flares, it is important to offer not only thermal signature similar to aircraft but also the relative intensity ratio should be comparable to aircraft. Consequently the main parameters for effective development of decoy flare include:

For an aircraft, θ value in the range of 0.7; recent decoy flares offered θ values of 1.3-1.4 [2,4]. This study is dedicated to the effective development of novel decoy flare that can offer high emissivity, high combustion temperature, and with Ɵ value similar to that of the aircraft. Flare with such characteristics could be an effective countermeasure against infrared missiles attacks. The development of decoy flare with controlled radiant intensity requires physical and chemical means to be applied [1,18-28].

Research studies conducted on Aluminum/Teflon/Viton mixtures were limited to burning temperature and burning rate no information about thermal signature has been reported [29,30]. In this study, thermal signature of jet engine (jet cat p200 sx) was measured using (FT-MIR 1-6 μm) spectrophotometer. The characteristic intensity ratio for this engine was calculated. ATV flares with different fuel percentage were prepared and pressed in the desired dimensions. The spectral performance of developed flares was measured and compared to jet engine thermal signature. Quantification of combustion temperature and the main active emitting species (c soot (nearly ideal emitter), AlF (molecular emitter), and Al (heat source)) in the combustion flame was conducted using ICT Thermodynamic Code (Institute of Chemical Technology in Germany, virgin 2008). ATV flare with 50 wt% Al offered higher intensity over α band (2-3 μm) and β band α band (2-3 μm) by 6 and 1.5 times respectively. The main outcome of this study is that this novel flare offered Ɵ value of 0.73. 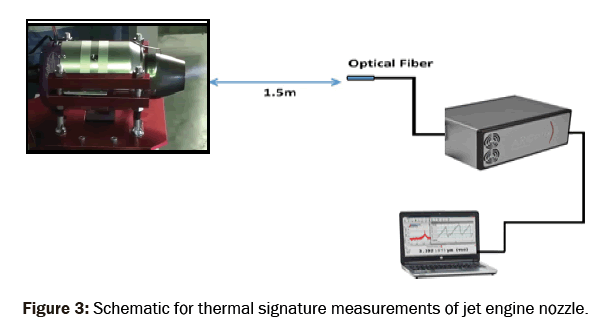 Chemicals and materials: The main constituents for flares manufacture include oxidizer, metal fuel, and binder. Teflon can act as an oxidizer; Viton A can act as plasticizer and binder. Table 1 tabulates a list of chemicals used in this study.

Table 1: The function and structure of different used chemicals.

An efficient study, to develop ATV flares with improved spectral performance was performed. This study includes the following main steps:

Development technology of decoy flares, should emphasize mixing and homogeneity of different ingredients to the molecular level, as well as accepted mechanical properties.

Decoy flares were developed via granulation and subsequent pressing. This approach can ensure good homogeneity and integrity; it includes 5 main stages as follow:

3. Granulation was performed to retain the homogeneity of the composition. Alternatively, light and dense materials might segregate during transportation, processing, and storage.

4. Filling, by loading 25 g of the composition into metal cylinder of 2.5 cm diameter.

5. The final product was achieved by applying a pressure about 200 atm.

Figure 4 shows the main steps for manufacture of ATV flares. 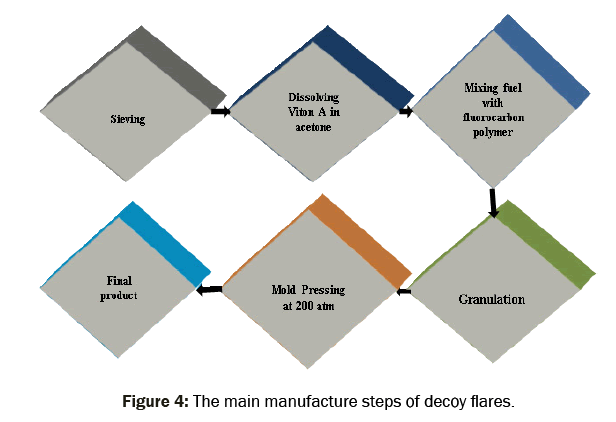 All investigated compositions were prepared with the same methodology, to avoid any variability, which would affect the performance. 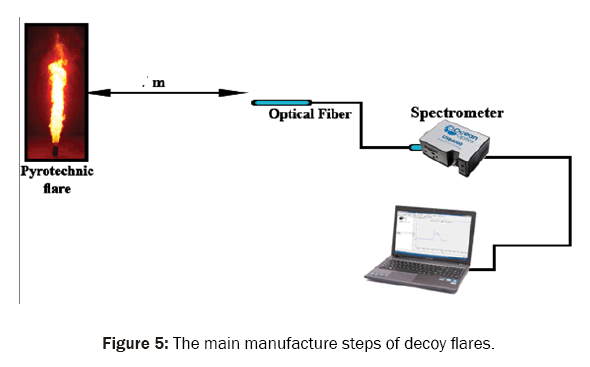 The inlet of the optical fiber was fixed at distance of 1.5 m from the tested flare. Thermal signature was recorded in counts/s for each wavelength. After acquiring data, the average intensity of α and β bands was evaluated using MATLABR2014 b software.

Absorption of the IR emission by air (CO2 and H2O) could attenuate the signal over the region 3-4 μm due to CO2 and H2O IR absorption [31,32]. This jet engine has θ value of approximately 0.3. Figure 6 demonstrates the thermal signature of jet engine nozzle. 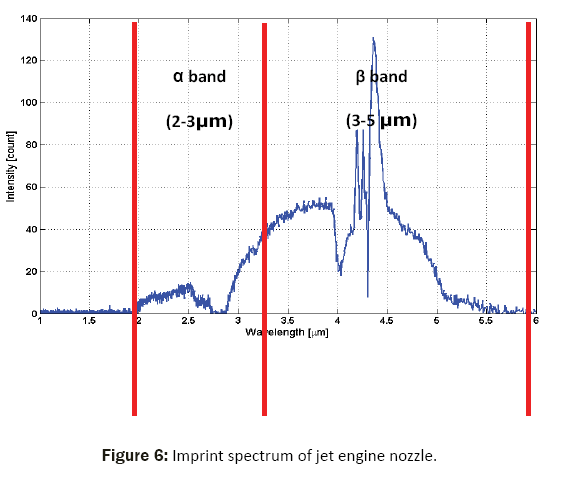 Thermal signature measurements demonstrated an increase in the intensity of α and β bands with the increase in Al content. Figure 7 demonstrates the IR spectra of the ATV compositions within the band 1-6 μm as function with Al content. 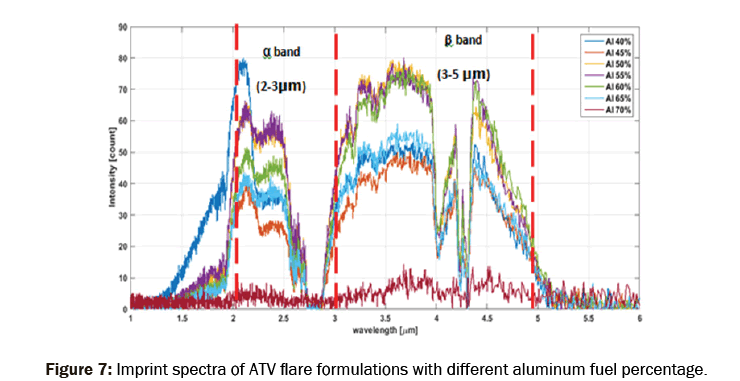 ATV flare with 50 wt% aluminum offered the highest average intensity in the two bands α and β. The average intensity of α and β bands was increased by 6 and 1.5 times, respectively. The relative intensity ratio θ was found to be 0.73. This superior spectral performance can be ascribed to an optimized combustion process, which could maximize the formation of main infrared emitting species (mainly AlF).

It was assumed that aluminum trifloride (AlF3) is formed during the reaction of aluminum with teflon [33,34]. The combustion temperature reaches 1275°C; at this high temperature the formed AlF3 could be vaporized according to eqn. (7) [30]:

Table 3: The Impact of fuel percentage on the formation of active emitting species.

AlF is a molecular species that would emit in the infrared region. This active species could be formed in the primary flame zone (1) next to the burning surface (Figure 8).

This primary zone is characterized with high combustion temperature and high density of (carbon soot) heated up by primary combustion products (i.e. AlF). This (carbon soot) at high temperature could be nearly ideal emitter (with ε=0.9). Adjacent to the primary reaction zone is a secondary zone (2) (sparks) where Al fuel (small percent in vapor phase) which could be oxidized by air forming Al2O3. The outer zone (3) demonstrates thermally glowing carbonaceous particles that undergo combustion to form CO2. Furthermore, formed CO2 yeild strong peak emission at 2 μm and strong emission bands at 4.3 μm. At this zone (3) complete oxidation of combustion, products could take place. 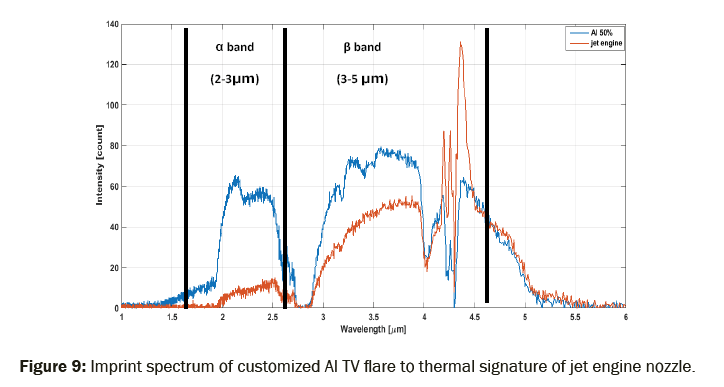 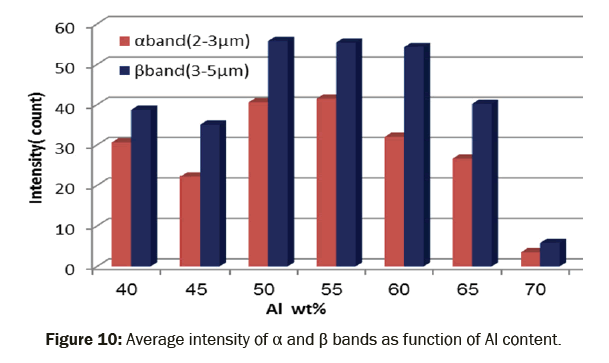 Figure 10: Average intensity of α and β bands as function of Al content.

The effect of Aluminum content can be categorized into three main regions:

• The maximum average intensity was at 50% Al percentage.

• There was a decrease in average intensity with Al content from 50% Al till 70% Al.

Flares should have a fuel rich system to enhance ignitability and combustion stability. The major combustion products are AlF (transient state), AlF3, Al (L), small amount of Al2O3, carbon soot and carbon dioxide. ATV flare with 50 wt% Al offered an increase in the intensity of α and β bands to that of real jet engine nozzle by 6 and 1.5 times respectively. This enhanced spectral performance was ascribed to the high content of AlF (main infrared emitters) in the combustion products. The oxidation of carbon soot to CO2 would yield strong peak emission at 2 μm and strong emission bands at 4.3 μm. This paper would open the route for development of ATV flares with customized spectral performance as an effective countermeasure of IR seekers.