Mango (Mangifera indica L) which belongs to the family of Anacardiaceae, is a rich source of biologically active compound mangiferin, which is a natural xanthone C-glucoside. Mangiferin, (1,3,6,7-tetrahydroxy xanthone-C2-b-Dglucoside), has been isolated from various parts of Mangifera indica. Mangiferin is a pharmacologically active phytochemical present in large amount in bark, fruits, roots and leaves of Mangifera indica. Mangiferin has been traditionally used in some parts of world as anti-inflammatory, antibacterial, analgesic, antipyretic, antioxidant, antitumor, antiviral, immunomodulatory, anthelminthic and in obesity treatment. The present work is aimed to isolate mangiferin by column chromatography from the ethanolic extract of flowering buds of Mangifera indica L and assess its antibacterial activity. The conclusive structure of the isolated compound was established using TLC, HPLC, UV/VIS, FTIR and NMR spectral analysis. In vitro antibacterial activity of the isolated mangiferin was studied on Gram positive and Gram negative bacteria by agar disc-diffusion techniques. The solutions of the isolated mangiferin showed activity with regard to various strains of two bacterial species: Staphylococcus aureus (Gram positive) and Salmonella typhi (Gram negative). The present study confirms the antibacterial effect of the isolated mangiferin which could be further processed for its development as an antibacterial agent.

The use of plant compounds for pharmaceutical purposes has gradually increased worldwide. The research and development thrust in the pharmaceutical sector is focused on the development of new innovative/indigenous plant-based drugs through the investigation of leads from the traditional system of medicine [3]. Each plant is like a chemical factory capable of synthesizing a limited number of highly complex and unusual chemical substances derived from plants that are considered as important drugs currently in use, while several other drugs are simple synthetic modifications of the natural products [4]. Mangifera indica L. (Anacardiaceae) is one of the most important and abundant tropical fruit in the world and India contributes to a major part of the world’s mango production. In Indian delicacy, mango is considered as the king of all fruits. Mangifera indica L. (Anacardiaceae) is one of the most important tropical fruits in the world, as some 69 varieties of the species are known [5] and India contributes major part of the world production. Mango is considered as the king of fruits in Indian delicacy. The tree (Mangifera indica) is indigenous to the Indian sub-continent and has been cultivated in India for over 4000 years. It is thought to have reached East Asia between the 4th and 5th century BC and cultivated in East Africa and thereafter in Brazil, West Indies, China, United States, Caribbean and Mexico.

The easiest source of mangiferin, however, is the mango plant (Mangifera indica L). Mangiferin is the major component (10%) of Mangifera indica (mango) belonging to the family Anacardiaceae, that grows mainly in tropical and sub-tropical regions and is widely used in folk medicines for various therapeutic indications [13]. Among the various polyphenolic compounds found in mango [14], mangiferin (C-2-β-D-glucopyranosyl-1,3,6,7-tetrahydroxyxanthone, also named C-glucosyl xanthone) is a distinct one. Mangiferin is a heat-stable molecule and a natural pharmacologically active phytochemical that has various biological activities.

Mangiferin, traditionally used by native inhabitants of Bolivia, Southern Guiana, the Antilles, Columbia, the Philippines, and India in the treatment of a number of diseases, has subsequently been proved to have a varied pharmacological activities such as antibacterial [15], antitumor, immunomodulatory, anti-HIV [16], anti-diabetic [17], anti-oxidative [18], anthelminthic and anti-allergic [19], anti-inflammatory activity [20], anti-viral [21], and macrophage-inducing activity [22].

Recently, the World Health Organization (WHO) has reported about 119 plant-derived pharmaceutical drugs, out of which 74% are used in modern medicine that are correlated directly with traditional uses as Herbal plant medicine. In the present scenario, about 80% of the world population presently uses herbal medicine for primary health care. The remaining 20 %, who mainly reside in developed countries, consume costly medicines [23].

Since ancient times, people have been exploring the nature, particularly plants, in search of new drugs. This has resulted in the use of a large number of medicinal plants with curative properties to treat various diseases [24]. In India, almost 95% of the prescriptions are plant based in the traditional systems of Unani, Ayurveda, Homeopathy and Siddha [25]. The study of plants continues principally for the discovery of novel secondary metabolites. Around 80% of products are of plant origin and their sales exceeded US $65 billion in 2003 [26].

Natural products from plants are of interest for the discovery of antimicrobial compounds. Today, the pace of antimicrobial discovery has slowed. During the 20-year period from 1983 to 2002, the FDA's (Food and Drug Administration) approval of new antimicrobial agents decreased by 56% [27].

Due to the report of increasing development of drug resistance in human pathogen as well as undesirable side effects of certain antimicrobial agents, it is essential to search for new agents that are better, cheaper and devoid of side effects for treating infectious diseases especially in developing countries. A wide variety of plant/natural products are used in the treatment of infections. Phyto constituents have been found to inhibit bacteria, fungi, viruses and pests [28]. Medicinal plants have their intrinsic ability to resist pathogenic microorganisms and this has led researchers to investigate their mechanisms of action and isolate the active compounds. This has enabled exploitation of medicinal plants for the treatment of microbial infections of both plants and humans by developing new antibacterial agents. Medicinal plant based antibacterial agents represent a vast untapped source of pharmaceuticals. So further exploration of plant antibacterial agents need to occur for treatment of infectious diseases both in plants and humans while simultaneously for mitigating many of the side effects that are often associated with synthetic antibacterial agents.

The present study is aimed to isolate mangiferin from the flowering buds of Mangifera indica using different extracting solvents and the isolated mangiferin was identified by TLC, HPLC, UV/VIS, FTIR spectroscopy and NMR spectral analysis. The isolated compound was then screened for its in vitro antibacterial activity against Gram-positive and Gram-negative bacterial strains isolated from human infections.

The flowering buds were collected from local trees of Mangifera indica of Sugandha, Hooghly, in the month of February, at morning. The plant material was authenticated at Botanical Survey of India, by Mr. V P Prasad on 23rd May 2014 and a voucher specimen of no-CNH/47/2014/Tech II/102 was then assigned, where a voucher specimen was preserved for further reference.

The flowering buds of Mangifera indica were first cut into small pieces, and then they were dried at room temperature and further coarsely powdered. The coarsely powdered flowering buds of M. indica were extracted exhaustively with petroleum ether (60-80°C) in soxhlet apparatus for 56 hours to remove any fatty matter. Defatted powdered flowering buds were extracted by using soxhlet apparatus with required quantity of ethanol (95%) as solvent for 21 hours and concentrated under reduced pressure to yield a semisolid mass [31].

The semisolid mass was defatted repeatedly and finally dissolved in ethanol at room temperature. The ethanolic extract was further concentrated under reduced pressure which yielded a yellow amorphous powder.

Lastly, the pale yellow needle-shaped crystals of mangiferin were isolated and dried.

Sample preparation: 0.05% w/v of sample (mangiferin) was prepared in ethanol and 10 μl was applied on the TLC plate.

Detection: Ammonia vapour was used as spraying agent. The TLC plate was kept in UV chamber for 10 minutes and Rf value was observed at 366 nm.

The determination of mangiferin was achieved by reversed-phase high performance liquid chromatography (RP-HPLC). Analytical determination was conducted by RP-HPLC (Agilent 1260 Infinity) with ultraviolet detection at 278 nm.

Chloroform, acetone, formic acid were of HPLC grade which were procured from Merck (Darmstadt, Germany) and were used without further purification.

Five (5) mg of the isolated mangiferin crystals were dissolved in 10 ml methanol, it was filtered and injected six times in an HPLC column (ODS C18) and its retention time was determined and was compared with the reference standard.

One (1) mg of the isolated mangiferin crystals were dissolved in methanol and the maximum wavelength of absorption were determined by UV-VIS spectrophotometer (UV-1800-240V SHIMADZU). Scanning of the isolated compound was performed at the wavelength range of 200-400 nm and was compared with reference standard.

IR data of isolated compound was compared with the reference standard of mangiferin.

Preparation: Peptone, sodium chloride, beef extract were weighed as required and poured in a conical flask. Water was added to it. The pH of the preparation was measured and agar was added to it. Then volume was made up. It was then sterilized by autoclaving at 121°C, 15 psi for 15 minutes (Table 1).

Preparation: Peptone, beef extract, sodium chloride were weighed as required and poured in a conical flask. Water was added to it; pH was measured and adjusted with N/10 sodium hydroxide. The volume was made up. It was then sterilized by autoclaving at 121°C, 15 psi for 15 minutes (Table 2).

The nutrient agar plates were prepared by pouring 15 ml of molten media in sterile petridishes. The plates were allowed to solidify for 5 minutes and standardised inoculum suspension was swabbed uniformly and the inoculum was allowed to dry for 5 minutes. The isolated mangiferin crystals were subjected to serial dilution as follows: 10 mg/ml, 5 mg/ml, 2.5 mg/ml and 1.25 mg/ml. With the help of a sterile cork borer, wells (6-8 mm in diameter) were dug on the middle of the agar plates. 0.5 ml of the prepared sample solution was then introduced into the appropriately labeled bored agar well. Each plate also had a control where only sterile water was added.

The plates were incubated at 37°C for 24 hours [47]. After incubation the diameter of inhibitory zones formed around each well were measured in mm and recorded.

HPLC chromatogram: Following Figure 1 shows the LC chromatogram of the isolated mangiferin obtained from the extract of the flowering buds of Mangifera indica (Table 4).

Figure 1: LC chromatogram of the isolated mangiferin obtained from the extract of the flowering buds of Mangifera indica.

Ultraviolet spectroscopy: The UV spectrums of isolated mangiferin and reference standard in methanol showed two major peaks which were as follows: 278 nm and 215 nm.

Table 5: Interpretation of IR spectra of the isolated sample.

Figure 2: The structure of mangiferin matches with the interpretation of IR spectra.

Antibacterial activity of the isolated mangiferin against Gram-positive and Gram-negative bacteria is given in Table 6. 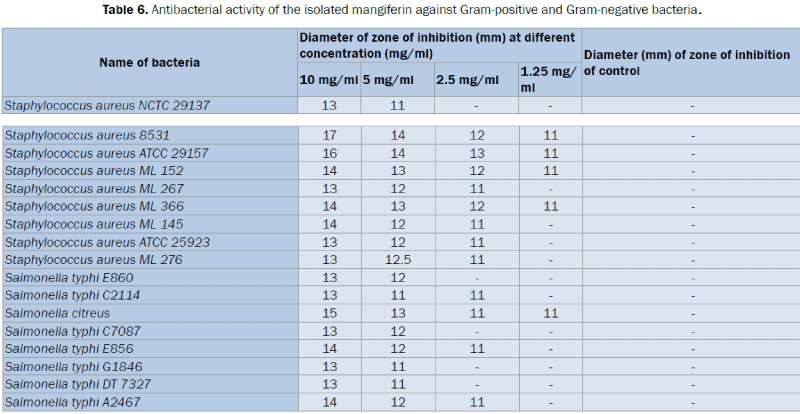 Table 6: Antibacterial activity of the isolated mangiferin against Gram-positive and Gram-negative bacteria.

In the present study, the flowering buds of Mangifera indica was first defatted with petroleum ether (60-80°C) prior to extraction with 95% ethanol. Followed by this, the extract was chromatographed over silica gel and eluted with chloroform: acetone: formic acid (8:1.5:0.5) to obtain mangiferin as a pale yellow needle shaped crystals.

The available literature on structure elucidation of the isolated mangiferin reveals the conclusive structure of mangiferin (C19H18O11) can be established as glucoxanthone (1,3,6,7-tetrahydroxyxanthone-C 2-b-D-glucoside).

In vitro antibacterial activity of the isolated mangiferin was evaluated by using various strains of two bacterial species: Staphylococcus aureus (gram-positive) and Salmonella typhi (gram-negative). The solution of the isolated mangiferin was found to exert promising antibacterial activity against gram-positive and gram-negative bacteria. The present study found a very promising and readily available source (mango, Mangifera indica) for treating infections caused by bacteria. This is particularly significant because drug resistance to human pathogen has been increased not only in the developing countries but throughout the world due to indiscriminate use of antibiotics [48]. So from the present screening it could be concluded that mangiferin possess antibacterial activity and may be processed further for the development of an antibacterial agents.