In the present work we investigated the photodegradation of tartrazine by silicon nanowires (SiNWs) without presence of H2O2. SiNWs were elaborated with a simple chemical method termed metal-assisted electroless etching. Also, SiNWs modified with copper was experimented as photocatalysts for the degradation of tartrazine and the effect of copper concentration was examined. The results show that silicon nanowires modified with high concentration of copper exhibit the best photocatalytic activity with a degradation rate follows the pseudo-first-order kinetics.

Around 50% of all dye diversity is represented by azo dyes and due to their extensive applications and persistence they pose a clear environmental hazard [1]. Water is an essential natural resource for human being and for all life forms [2,3]. The use of dyes in textile, pharmaceutical, cosmetic and food industries leads to the pollution the wastewaters with different concentrations. Consequently, the reuse of wastewaters has become an absolute necessity. A wide range of methods for the removal of synthetic dyes from wastewaters, including physical adsorption, electrochemical oxidation, and chemical oxidation were proposed. These methods are not destructive and they only transform the pollutant from one phase to another. So, there is an urgent need to develop innovative, more effective and inexpensive techniques for treatment of wastewater [4]. Heterogeneous photocatalytic oxidation, one of the Advanced Oxidation Processes (AOPs), has attracted much attention in recent years and has proved to be a promising technology for remediation of organic pollutants at ambient conditions [5-12]. Photocatalytic oxidation, in the presence of semiconducting materials, of organic compounds with environmental concern was studied extensively during the last 20 years and it was demonstrated that heterogeneous photocatalysis can be an alternative to conventional methods for the removal of organic pollutants from water and wastewater [13]. This process is based on the direct or indirect absorption by a solid, usually a semiconductor, of photons of visible or UV light. When this semiconductor is illuminated, it can generate electron-hole pairs by promoting an electron from the valence band to the conduction band, thus leaving a hole in this band. These holes can react with H2O or hydroxyl groups from the reaction medium and produce highly reactive hydroxyl radical species. On the other hand, the electrons promoted to the conduction band, can reduce the molecular oxygen to peroxide anion to form hydrogen peroxide or organic peroxide in presence of organic compounds [14]. Radical hydroxyls are strong oxidizing agents that can degrade organic compounds or their intermediaries to reach final products such as CO2, H2O.

The dye “tartrazine” experimented in this work, is an acidic azo dye with a sulfonic group as an auxochrome that is highly water soluble and polar. It is widely used in cosmetics, drugs, electroplating, pharmaceuticals and textile industry and also as food colorant [15,16]. Tartrazine seems to cause the most allergic and intolerance reactions, particularly among asthmatic patients, migraines, eczema, thyroid cancer, and lupus [15].

The dye has the following structure (Figure 1). 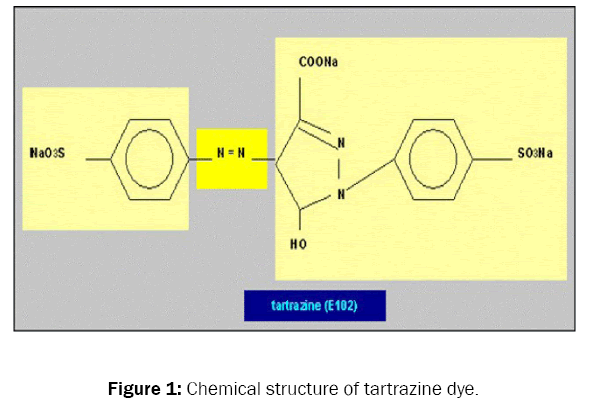 Tartrazine powder with high purity (≥95%) was used without further purification purchased from S.A color. Silicon obtained from Siltronix was used to elaborate the photocatalysts. All chemicals used in this study such as copper (99.99%), hydrogen fluoride (50%), oxygen peroxide (30%), nitrates of silver (99.8%), acetone (98%), ethanol (99.8%), sulfuric acid (95–97%) and nitric acid (69%) were obtained from Sigma–Aldrich.

Elaboration and Modification of Silicon Nanowires

Silicon nanowire was formed by electroless etching of p-type Si (100) with resistivity 7.7-8.66 Ohm.cm. The silicon wafers were cut up in samples of 10 x 10 mm2 size. The cleaning of the samples and elaboration of silicon nanowires were made according the processes reported in our previous report [17]. H-terminated SiNWs were obtained by immersing the prepared SiNWs into HF solution for 5 min. Just after, the samples were immersed for 2 min at room temperature into two aqueous solutions of two different copper concentrations:

Then, the Cu-modified SiNWs were rinsed with water and dried under a gentle stream of nitrogen. The difference between these two solutions lies in the amount of copper that will be deposited onto SiNWs.

In this application of photocatalysis, we used silicon nanowires samples unmodified and modified with copper nanoparticles of surface about 1.5 cm x 0.7 cm as catalysts. The photocatalyst was immersed in a quartz cuvette containing a 4 mL aqueous solution of tartrazine with an initial concentration C0=1.035 x 10-5 mol/l. The solution were irradiated with UV light (λ=365 nm) at room temperature for 200 min. The progress of the degradation of tartrazine was monitored every 20 min by UV-Vis spectroscopy.

The morphology of silicon nanowires unmodified and modified with copper nanoparticles were examined by scanning electron microscopy (SEM) Philips (XL30). The absorption spectra of the tartrazine solutions in quartz cuvettes with an optical path of 10 mm were recorded using a CARY 500 “VARIAN” UV–vis spectrophotometer. The wavelength range was 200–600 nm.

Morphology of silicon nanowires: Figure 2a depicts that silicon nanowire are uniformly formed and vertically aligned to the surface forming a perfectly clear interface between nanowire layer and substrate as can be observed in cross-sectional SEM view (Figure 2b). The length of nanowires is roughly 13 μm and their diameter ranges from 20 nm to 100 nm. Also, Figure 2b shows that the nanowire tips stick together forming bundles due to van der waals’ forces [18].

Figure 3a and 3b depicts typical cross-section SEM images of the Cu-modified SiNWs in the solution 0.14 M CuSO4-1.35 M HF for 2 min at room temperature. It can be seen that the CuNP are deposited onto nanowire walls reaching a depth of about 8 μm. They are of spherical shape with a diameter in the range 46–110 nm.

Figure 3: Cross-sectional view SEM images of SiNWs modified with copper nanoparticles in solution 0.14 M CuSO4- 1.35 M HF for 2 min at room temperature (a) and at high magnification (b).

When, the deposition solution of low concentration of Cu (0.02 M) was used, a very low amount of CuNP was deposited onto SiNWs as can be shown on the plan SEM image of the Figure 4.

The spectrum absorption of tartrazine shows two main bands, one at 257 nm and another at 428 nm (Figure 5). The band at 257 nm is characteristic to the aromatic rings and the 428 nm can be assigned to the n-π* transition of the N=N, C=N and C=O groups, responsible for the color of the dye [20]. Figure 5 shows that when we have not used SiNWs as photocatalysts, the absorption bands decrease very slightly when the UV irradiation time is increased. This means that the tartrazine is very stable under UV irradiation in the absence of catalyst.

Figure 6 shows the photocatalytic degradation rate of tartrazine (A/A0) without and with presence of unmodified SiNWs, where A is the concentration after irradiation and A0 is the initial concentration of tartrazine. A slight improvement of the photocatalytic activity can be noted when hydrogen terminated silicon nanowires H-SiNWs and oxidized silicon nanowires Ox-SiNWs are used as photocatalysts. Indeed, degradations of 27.4% and 17.7% were obtained after irradiation for 200 min for H-SiNWs and Ox-SiNWs, respectively.

Figure 7 shows that the efficiency enhances and becomes more significant when the SiNWs were loaded with Cu using solution (Cu1). A degradation rate of 34.23% is obtained after UV irradiation 200 min. However, when the density of the Cu NPs on SiNWs was significantly increased, a huge increase of the photoactivity was observed. Indeed, the degree of tratrazine degradation using the solution (Cu) for deposition is about 67.45% after 200 min.

The highest photocatalytic activity of the sample modified with CuNPs could be attributed to the ability of CuNPs to facilitate electron–hole separation and to promote electron transfer process in the catalytic photodegradation reaction. This is due to the higher work function (4.7 eV) [25]. In addition, it can be ascribed to the oxidation of the Cu nanoparticles as suggested by Naama et al. to explain the enhancement of photocatalytic efficiency observed after oxidation of Cu nanoparticles [17]. Because, it is well known that copper oxide phases promote the production of hydroxyl radicals OH•, which are strong oxidizing agents for organic pollutants [17,26].

Many experiments on the photocatalytic degradation of the dyes show that the degradation rate follows the law of Langmuir Hinshelwood for low initial concentration of dyes (C0<10-3) [27,28]. In this case, the photodegradation process follows the pseudofirst- order kinetics according to the following equation:

r: apparent velocity of the reaction

k: constant of the reaction rate

K: constant of the dye absorption

Integration of the equation (I) will lead to the following relation:

The values of Kappat obtained for different photocatalysts are listed in Table 1.

The catalyst reusability is one of important performances of the photocatalyst, because a slow cost of the treatment of dye effluent is needed. To assess the stability of the photocatalyst, SiNWs modified with high copper concentration with the solution (Cu) were used for several photocatalytic process runs. The results in Figure 8 indicate that the activity of SiNWs (Cu) slightly decreased and 53.43% tratrazine degradation was achieved after second run (test 2). However, after storage in air for three months, we found that the activity is increased even becomes higher than that of the first run. A tratrazine degradation rate of 76.69% is accomplished after UV irradiation 200 min (test 3). This may be due to the complete oxidation of the copper nanoparticles surface in the open air causing the formation of CuO and Cu2O as already aforementioned. This promotes the production of hydroxyl radicals OH* which increases degradation of tartrazine.

The authors gratefully acknowledge the financial support from General Direction of Scientific Research and of Technological Development of Algeria (DGRSDT/MESRS).