The otolith shape analysis is a powerful tool to use in studies focusing to marine biology and ecology in various aquatic areas (marine, dam and lagoons) as well the identification of fish stocks of species. In the present study, the sagittae otoliths were used to compare specimens of Mugil cephalus collected from two Tunisian regions, Tabarka Sea and Nebeur Dam. We analyzed the shape variation by sex (male and female) and otolith side (left and right) in order to discriminate the stock structure of Mugil cephalus. Discriminant analysis demonstrated statistical differences in the otolith shape between specimens of two sampling sites, which indicate a clear population differentiation. Also, these results were confirmed by highly statistically significant difference between otoliths’ shape (left and right) for both sexes. Hence, the shape variability of otolith between these two sampling sites is probably correlated with local environmental factors.

The fish group of mullets (family Mugillidae) is common in many brackish water ecosystems such as lagoons, estuaries, and small creeks around mangrove forests [1]. They are euryhaline species inhabiting from marine to freshwater environments [2,3] and they constitute a fundamental protein resource for populations living in coastal areas [4,5]. In Tunisia, this family is represented by five species: Mugil cephalus, Liza saliens, Lisa aurata, Lisa ramada and Chelonlabrosus [6,7]. The grey mullet Mugil cephalus has the largest market value among other mullets species [8,9]. In fact, this species occurs worldwide mainly between latitudes 42°N and 42°S [10,11] and plays an important role in the fisheries and aquaculture of tropical and subtropical regions of the world [12-14].

In the last decades, numerous investigations has been focused on fish sclerochronology using otoliths to the detriment of other calcified structures such as elements of internal skeleton and scales [15-17]. According to literature, numerous investigations [18-20] confirmed that otoliths have been showed as natural data loggers that record information at different temporal scales related to their environment and growth, including, movement patterns and habitat interactions, age and growth [21-25].

This information can be interpreted at the population level in terms of the ecology, demography, life history of the species, and hence they are considered fundamental to the management of fisheries and protected species around the world [26]. Specifically, otoliths are hard-calcified structures located in the inner ear of all teleost fishes [27-29]. There are three pairs of otoliths named as sagittae, asteriscus and lapillus [30].

The otolith shape analyses are powerful tools in the systematic research, species identification and stomach content of predators [31-33]. The variability of otolith shape is a species-specific feature, which can be used to discriminate among stocks and seems to be associated with genetic heterogeneity [28,34-37]. The morphological differences from fish’s species affect both the size and shape of the otoliths [38-40]. Different factors such as tempeture deth and food influence the contour shape of the otolith [27,41-45]. However, there are also other factors such as phylogeny [46,47] and adaptive aspects related with the inner ear functions [38,48,49]. As known, otholiths exhibited some phenotypique plasticity inter-and/or specifique and intrapopulationel [37,45,50].

The aim of this study was to evaluate for the first time by using otolith shape, the stock structure of Mugil cephalus from marine (Tabarka Sea) and Nebeur Dam in Tunisia, which exhibited different ecological parameters. Also, we analyzed Sagittae otolith shape variation of this species for two sides (left-right otolith) and both sexes (males and females) for each specimen (60 fish of each sampling site).

Mugil cephalus individuals were collected during 4 months between February and May 2013 in two stations in Tunisia (Tabarka Sea and Nebeur Dam) (Figure 1). Figure 1: Sampling sites of the two Mugil cephalus populations (Tabarka and Nebeur) analyzed in this study.

Tabarka Sea located in the extreme northwest of Tunisia [56] and Nebeur or “Mellegue” dam, which is a large reservoir drainage area (10.300 Km2) [57], located about 7 kilometers west of the city of Nebeur (Kef). For each sampling site we collected and selected 60 specimens: 30 males (♂) and 30 females (♀).

We take the standard length of fish SL (mm) and we determined the total weight of fish TW (g) using a precision balance (see Table 1).

To access cavities containing sagittae otoliths, we open the skull; the cut was made with care to avoid destroying the otolith: on the ventral side, the lid was removed over the head of the fish, the gills are visible and gill arches are cut on the inner edge, using a chisel. A small incision in the outer portion of the bubble opens to the inner ear. Once collected, the otoliths (left and right) were cleaned with distilled water, dried, wrapped in cotton wool and kept in Eppendorf tubes.

A total of 180 otoliths were photographed using a digital camera (Sony) with high performance associated with a dissecting microscope. The otolith photos were processed by the software: Adobe Photoshop CS6 which transforms the original image of the otolith into a binary image (Figure 2). Then, images were processed with "Shape 1.3" software, to determine, the Fourier coefficients (a, b, c and d) which correspond to values of the projection image on the axes (X) and (Y) [58],(Figure 3) allowing to describe the otolith contour. 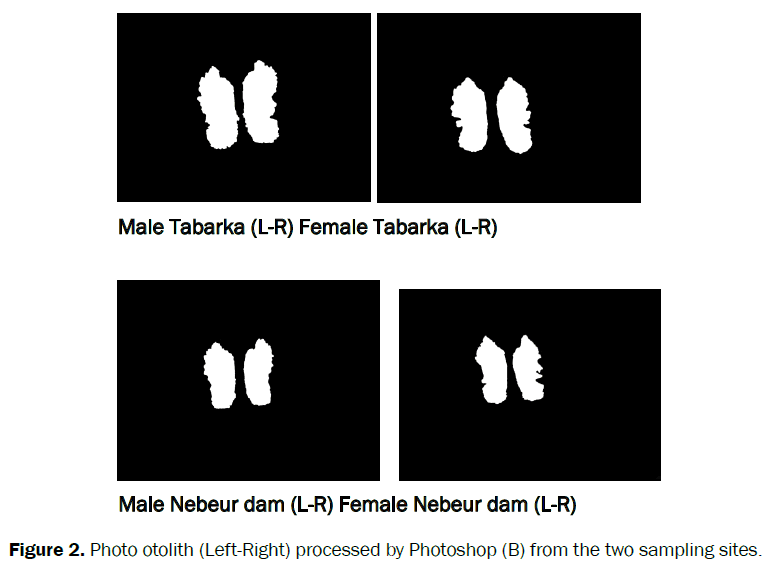 Figure 2: Photo otolith (Left-Right) processed by Photoshop (B) from the two sampling sites. The obtained results are converted into Microsoft Excel so that they are processed by the statistical software.

The statistical analysis of the otolith’s silhouette is conducted by the Elliptic Fourier Analysis (EFA) describing the shape of this latest. A number of 20 harmonics are fixed (this number necessary and sufficient) to have the best possible otolith shape [59]. A total of 180 replicates were obtained (60 observations for each sexes, thereby each left-right otolith sets and each study site). The multivariate analysis was performed to treat all otolith parameters. The data matrix was previously subjected to the Discriminant Function Analysis (DFA), to illustrate the differences and similarities between the observed groups and optimize the variability existing between them [60]. All statistical analyses were performed using STAT EXCEL 2010 software.

The Mahalanobis and Fisher Distances between two sides of otoliths (Right and left) and both sexes (male and female) for the two sampling sites are indicated in Tables 1 and 2.

Table 1: Mugil cephalus mean and standard deviation of standard length (SL) and total weight (TW) of specimens of examined in this study.

For both stations, females have more similarity in the left otoliths than the right (Tables 1 and 2). The right otolith showed the highest Mahalanobis distance (20.942) while the left one exhibited the lowest value (11.714). Also, the two sides of otoliths (right and left) have statistically significant differences (P=0.031).

For the two populations, males have a higher similarity in the left otolith than in the right with Mahalanobis distances ranged from 10.922 to 16.496 respectively. In addition, statistically significant differences were recorded between the two sides of the otoliths (P=0.013).

Table 3: Fisher Distances between two sexes and two sides of otolith from two sampling sites (Tabarka and Nebeur Dam) above diagonal and P-values below diagonal.

In discriminant function analysis, the first canonical function accounted for the largest amount of between-stock variability (39.25%), while the second accounted for 24.41 % respectively. Plotting DF1 and DF2 explained 63.67% of variability between populations (Figure 3).

The otolith shape variability was analyzed for Mugil cephalus in two stations: Tabarka Sea and Nebeur Dam. In this study, the Fourier analyses results for the pair of otoliths (left and rights) compared by sex confirms the existence of two different populations of Mugilidae along the Tunisian coast. The discriminant function analysis showed that the otolith shape have statistically significant differences in these two stations. Also, these results were confirmed by highly statistically significant difference between otoliths’ shape (left and right) for both sexes.

Generally, otoliths are natural data loggers that record information at different temporal scales related to their environment [61]. Hence, the difference in the morphology detected between the two populations was related to the different properties of the dam environment such as Food and reproductive strategies from the marine environment to the dam [62,63]. In this way, environmental factors (such as temperature, salinity, feeding and depth) could probably cause the geographic variations in the shape or appearance of the otolith nucleus, otolith annuli, and variations in the ratio of otolith size to fish size [64]. In this way, Chang et al. [65] confirmed that the otolith elemental composition of Grey Mullet Mugil cephalus can be affected by the salinity which differed from fresh water and seawater.

In this context, Trojette et al. [60], confirmed otolith shape variation in three populations of the brown rockfish Scorpaenaporcus from marine and island environments along the Tunisian coast. Also, Leguá et al. [32] described significant differences of otolith shape of Micromesistius australis between the Pacific and Atlantic oceans but these differences were not affected by sexe. In this case, for Mugilcuremain Cuyutlan Lagoon (Mexico), Espino-Barr et al. [66] revealed a morphometric differences in two sexes between right and left otoliths (sagitta, asteriscusand lapillus) of fish sides. Recently, Rebaya et al. revealed an extensive morphological variation of sagitta shape of Liza Ramada from marine (Sea resort of Cap Zebib) and freshwater waters (Mellegue Dam) in Tunisia which correlated with local environmental and ecological factors.

In this case, Hüssy [73] reported that the size and shape of the otoliths of Gadus morhua are ontogenetic effects but small differences in shape can result specifically from the availability of food and other environmental factors. In addition, the water chemistry is a considerable factor influencing the otolith [19].

In order to explain differences in intraspecific size otolith shape in fish species Platt and Popper suggested that otoliths are a very important part of the fish’s inner ear and play an important role in the sound transduction process [74]. Additionally, variability in otolith size is an indicator of the way how the teleostean inner ear functions [38,41,48,49,75,76].

In another way, Morales-Nin [44] claimed that the environments occupied by each species can influence otolith growth which is closely related to depth and temperature [42,43]. Closely related species or populations from temperate or shallower waters have relatively larger otoliths than those from colder or deeper water [34,77].

In this work, the otolith morphological difference between Tabarka Sea and the Nebeur Dam stock may be due to environmental differences that correspond to marine and freshwater habitat respectively. Also, the otolith shape differences in a same stock (left-right otoliths) in M. cephalus can be attributed to environmental influences (temperature, currentology, depth, die) [50,63,78,79] or genetic mutations [59,80-106].

In conclusion, for this investigation, multivariate and Discriminant Fuction Analysis (DFA) were performed to analyze the sagitta shape variability from two different sampling sites. Indeed, the statistical analyses demonstrated the presence of extensive differences in otolith shape between Tabarka Sea and Nebeur Dam stock as well for both sexes and two sides (left-right). We can speculate that this differentiation may explained by environmental factors.

In future, genetic investigations including D-loop mitochondrial region are necessary to confirm our results.