Transition metal sulfides have attracted great attention owing to their outstanding properties and varied applications in photovoltaic devices. Ternary nickel cobalt sulfides are materials that have been considered as good electrode material for high performance energy storage devices owing to their higher electrochemical activity and capacity as compared to mono-metal sulfides. NiCo2S4 compound has been synthesized by annealing of its respective metal diethyl dithiocarbamtes (Cobalt and Nickel) complexes. Furthermore the compound formed was characterized by UVVis absorption which reveals that C10H20NiN2S4 has λmax at 290 nm while C10H20CoN2S4 has λmax at 321 nm and NiCo2S4 at 291 nm, FTIR of cobalt diethyl dithiocarbamate showing bands at 1487cm-1 and 1064 cm-1 while nickel diethyl dithiocarbamate showing bands at 1519 cm-1 and 993 cm-1 and NiCo2S4 showing sulfide stretchings at 447 cm-1 and 619 cm-1, in XRD major peaks were at 2θ=18Ë, 24Ë, 31.5Ë, 33Ë, 41Ë) while SEM confirmed the cubic structure of crystals. All the results indicated the synthesis of crystalline nickel cobalt sulfide. Thin films of nickel cobalt sulfide were made using PVD technique and calculated band gap was found to be 2.4 eV. Thus it is suggested that compound formed is excellent material for use in supercapacitors and also as an electrode material.

Metal-chelating ability of dithiocarbamate (DTC) compounds helps them to bind intensely and selectively to various metal ions and this binding to metals have emerged as a useful approach for the preparation of nanoparticles [1]. Dithiocarbamato complexes of transition metal ions persist to draw the consideration of researcher interest in these complexes stems from their chemistry and varied applications [2]. The interest in the dithiocarbamate ligand resulted in a large number of mono and bimetallic coordination compounds that displayed interesting properties [3]. Dithiocarbamate precursors are thus used in the synthesis of sulfide materials [4].

Sulfides of transition metals naturally exist in the form of minerals. They are not only abundant and cheap, but are also considered important class of materials because of their rich structural diversities along with remarkable and technologically relevant electronic and magnetic properties [5]. Extensive studies have been carried out on transition metal sulfides because of their growing importance owing to their admirable properties and encouraging applications in optical, electronic and optoelectronic such as solar cells, light emitting diodes, sensors, lithium ion batteries, fuel cells, thermoelectric devices [6-9].

Their distinctive and characteristic physical and chemical properties (e.g., higher electrical conductivity, mechanical and thermal stability in comparison to their corresponding metal oxides) as well as the rich redox chemistry that potentiates their capacitance (numerous times higher in comparison to carbon/graphite-based materials), enable them stick out from many other electrode materials [10-15].

The cobalt sulfides have been explored as strong material components for use in lithium ion batteries as cathodes having low over potential, good cycle life, high resilience and durability and also are most active pseudo capacitive materials [16,17]. Sulfides of cobalt when doped with nickel and graphene can then also be used as oxygen reduction reaction electrodes [18-21]. Furthermore in alkaline medium, nanoparticles of cobalt sulfide sustained on graphene have been used as ORR catalysts [22,23]. In addition, CoS2 crystals synthesized by hydrothermal process show a high geometric symmetry, had distinct octahedral structures that are highly uniform with a mean edge length of ~360 nm and usefulness of as synthesized CoS2 as electrode material for supercapacitors is ascribed to its pseudo capacitive properties and excellent cycling stability [24].

Nickel sulfides are considered versatile and multifaceted materials in a sense that they can be used as both the cathode and the anode for Lithium-ion batteries (LIBs) [25]. Nickel sulfide plays a pivotal role in number of applications because of its unique and distinctive characteristics. It has variety of uses such as being used as a metal insulator, paramagnetic -antiferromagnetic phase changing material, hydrogenation catalyst and solar storage. Hollow spheres, triangular nano prisms, nano tubes and nano needles are the different morphologies of nickel sulfide [26].

Nickel and Cobalt sulfides not only have the ability to remain constant under severe sulfo-reductive conditions and thus can be good catalysts for hydro-desulfurization [27] but also have been studied to approach an idea about their usage for anode materials having potential sulfur tolerance [28].

Ternary nickel cobalt sulfides have been regarded as a promising class of electrode materials for high performance energy storage devices owing to their higher electrochemical activity and capacity than numerous mono metal sulfides [29-32]. Binary metal sulfides have also been used, for the very first time, Xiao et al made an effort and prepared NiCo2S4 nanotube arrays on a flexible carbon fiber paper for supercapacitors and due to the distinctive nano architecture and the inherently high electrical conductivity of NiCo2S4, an outstanding electrochemical performance was achieved [33]. Diverse morphologies (nano-tube, nano-sheet, cubic and flower) of ternary metal sulfides had also been inspected as high performance pseudo-capacitive materials [34,35]. A research study conducted by Li et al. made new Ni3S2 at CoS core-shell nano-triangular pyramid arrays through electrodeposition process [36]. This customized nanostructure thus improves the performance of Ni3S2 by providing an extremely thin CoS shell to increase active areas, presenting good conductivity and short transportation lengths for both ions and electrons [37].

All of the chemicals and reagents that have been used in the experiment were of analytical grade. The chemicals used were Ethanol, Carbon disulfide (CS2), Potassium Hydroxide (KOH), Cobalt Nitrate Co (NO3)2, Nickel nitrate Ni (NO3)2 and diethyl amine.

Required number of moles of Amine was calculated for further processing. Base Potassium hydroxide (KOH) was used and weighed by calculating the mass multiplying the molar mass of base with that of number of moles of Amine (calculated earlier). Then this was added in ethanol solvent with approximate ratio as in the range of 40-50 ml followed by constant magnetic stirring for 20 minutes in three neck conical flask. After the base gets fully dissolved in solvent, then approximately 3.6 ml amine was added in base solution with constant magnetic stirring for at least thirty minutes. Then Carbon disulfide (also calculated by multiplying its molar mass with number of moles of amine) was added in the solution while constant magnetic stirring. The solution alters its colour from white to off white or yellowish white. Ligand solution prepared as in eqn. (1) was further used for metal complex formation step in eqn. (1).

Metal nitrate was then added in the above prepared diethyl dithiocarbamate ligand. The amount of metal nitrate (cobalt nitrate or nickel nitrate) was measured in grams and taken half of that of diethylamine used and then dissolved in ethanol solvent to prepare its homogenized mixture. These respective metal nitrate solutions formed were then added dropwise (with the help of a dropper or injection) in ligand with constant stirring. Afterwards the mixture was left for 2-3 hours for stirring which results in dithiocarbamates of respective metal according to eqns. (2) and (3). The metal diethyl dithiocarbamate solution was then filtered and washed with ethanol for further purification and then left for drying.

Nickel dithiocarbomate and Cobalt dithiocarbomate were taken in equal molar ratio and their homogenized mixture was made in a common solution i.e. ethanol. Solution was then evaporated and the product obtained was left for drying. The dried powder was then decomposed in a Tube furnace having inert atmosphere and at temperature of 500 degree Celsius for 4 hours.

The bimetallic sulfide formed was characterized by UV-Vis, FTIR, XRD and SEM analysis.

Physical Vapour Deposition technique was used to form thin films. Small pieces of glass slides were used. They were placed in sonicator having Acetone solution in it. Sonicator was set on for half an hour so that all impurities might be removed. These glass slides were further used for thin films formation. Pellet of the compound was made and mounted in the machine. Glass slides were pasted on a hand palm sized spatula and it was then set in the machine carefully. Finally PVD machine was operated. Fine thin layer of the material was coated on glass slide which was later analyzed by UV-Vis spectrophotometer. Thin film made by PVD was then put to calculate its band gap for futher possible future applications. 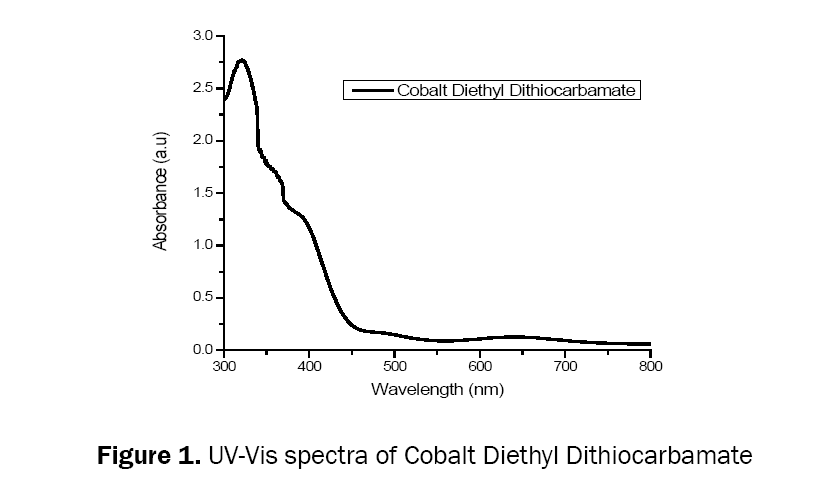 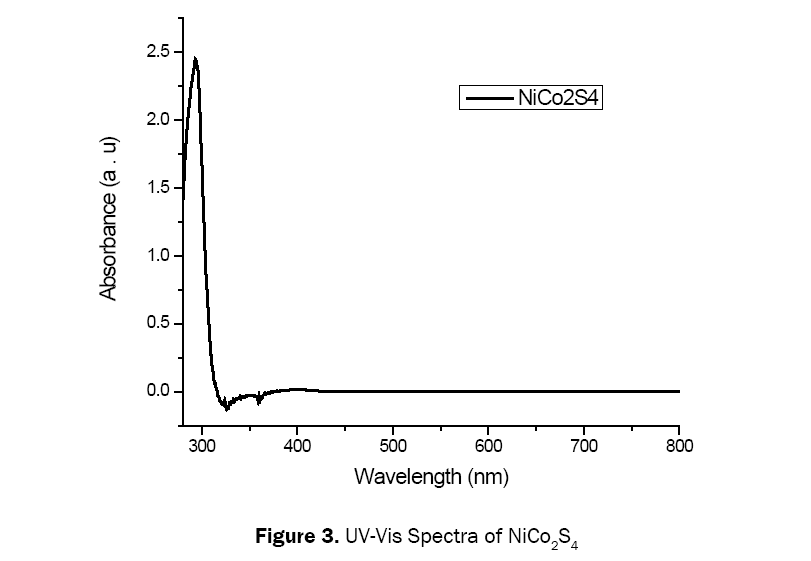 FTIR analysis of the Nickel Cobalt Sulfide was obtained at room temperature and it confirms the formation of NiCo2S4 (Figure 6). The spectra exhibits absorption bands at 447 cm-1 and 619 cm-1 which shows the sulfide stretchings. The observed peaks appear to be slightly shifted from the stated values and this shifting can be attributed to the formation of bonding between the Co, Ni and S. The peak at 3470 cm-1 represents the O-H stretching vibrations. 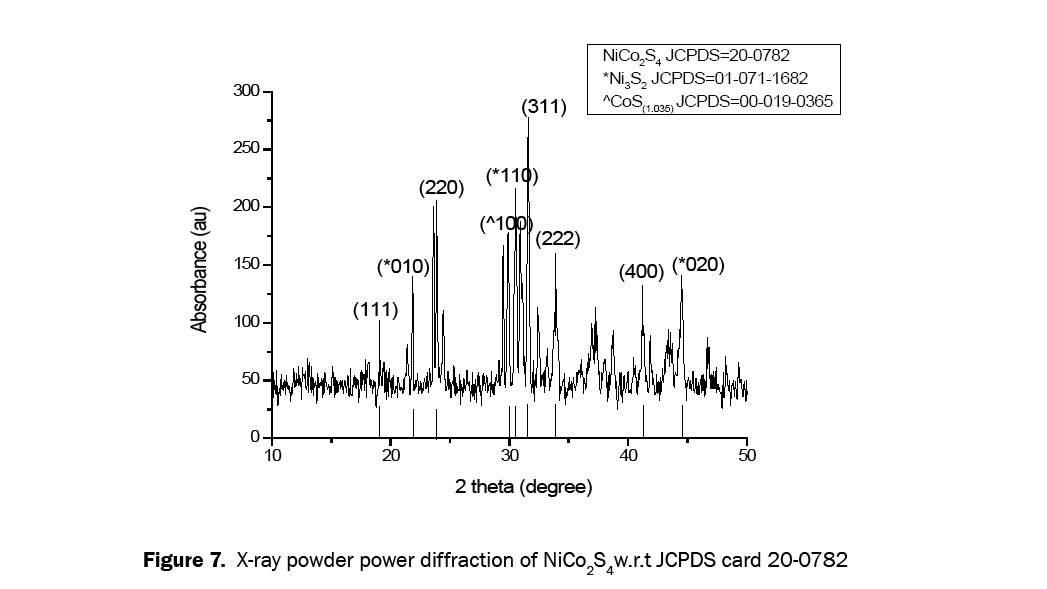 where λ is the X ray wavelength, θ is the Bragg’s angle, k is the shape factor which is 0.9 and β is FWHM value.

The estimated particle size of the sample calculated by the formula was about 13 nm. The result has been confirmed by the literature [46].

Vega 3 Tescan scanning electron microscope was used to analyse the samples. Morphology of the prepared nickel cobalt sulfide (NiCo2S4) was studied by using SEM images. These images of the samples were taken at different magnifications. In Figure 8, image (a) and (b) has been taken at a magnification of 500 nm and 2 μm. Both images are not much clear and defined. Image (c) taken at 10 μm, shows some crystalline material while image (d) which is taken at 20 μm shows many cubic structures. Presence of crystal indicates that the material is crystalline. Cubic structures seen in the images, represents the crystal structure of compound which has also been confirmed by the literature [46]. Band gap of synthesized thin film was calculated by using Tauc’s plot method. Tauc’s relation is given in eqn. (5) [47]

Where α is the optical absorption coefficient, A is a constant, hv is the photon energy, n for direct and in-direct band gap (2,1/2) while Eg is the optical band gap of the films. In Figure 9 given below (ahv)2 was plotted against hv, using extrapolation of the linear part the intercept on energy axis gives the value of band gap energy. Kulbeka Munk relation is given in eqn. (6) as:

F(R) in this equation is equal to α=absorbance coefficient and R denotes diffused reflectance. So, [(hv)*F(R)]2=A (Eg-hv). Band gap was calculated by using this formula. Graph was plotted by taking energy (eV) values on x-axis and [(hv)*F(R)]2 on y-axis. By extrapolating the straight line portion to the x-axis the band gap of the prepared NiCo2S4 was determined and it was found to be 2.4 eV shown in Figure 9. This value is in between the reported values for NiS and CoS which are 2.4 eV and 2.2 eV respectively [48].s

NiCo2S4 compound has been synthesized by annealing of its respective metal diethyl dithiocarbamtes. Single source precursors of bimetallic compound i.e nickel diethyl dithiocarbamate and cobalt diethyl dithiocarbamate were prepared by wet chemical method. The prepared NiCo2S4 has been characterized subsequently through UV-Vis, FTIR, XRD, and SEM. XRD studies revealed that material is highly crystalline. SEM images confirmed the cubic structure of the compound. The calculated particle size was 15 nm by applying Debye Scherrer equation. Thin film of NiCo2S4 has been synthesized through physical vapour deposition technique. The band gap of the thin film calculated to be 2.4 eV. From all the results it can be concluded that the material formed can be used as electrode material for high-performance energy storage devices and in supercapacitors.