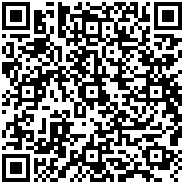 Adult patients with class II malocclusion can be treated routinely by extraction therapy. In the recent decades there was increasing popularity towards non-extraction treatment. Distalization of maxillary molars is one of the prime treatment modality to correct mild to moderate class II malocclusion cases with esthetically acceptable profile. A 19 year old post pubertal male patient came with the chief complaint of irregularly placed upper and lower front teeth. On examination the patient presented with a straight facial profile with potentially competent lips. On clinical and radiographic examination the patient was diagnosed as Angle’s Class II Subdivision malocclusion with proclined maxillary anterior teeth with an over jet of 2 mm and overbite of 2 mm and class I skeletal base with horizontal growth pattern. Treatment was started with non-extraction treatment plan. Unilateral distalization of molar on right side was planned using pendulum appliance and finishing the case in class I molar and canine relation with optimal over jet and overbite. As 5.0 mm of maxillary molars were distalized on right side, class I molar relation were achieved within span of four months without altering the patient’s existing profile.

Class II malocclusion is one of the most frequent problems in orthodontics, and distalization is considered one of the conservative ways to treat such cases. None traction treatment of class II malocclusion has become very popular in the last decade [1]. Distalization is a conservative method that is utilized in orthodontics to gain space by moving posterior teeth distally. It may be combined with other space gaining strategies, such as expansion, or can be used alone. Many methods have been used for distalization. These methods differ significantly in their place, whether to be extra oral or intraoral, site of action in upper and/or lower arch, and cooperation needed by the patient if it is removable or fixed [1].Indication or contraindication for molar distalization is given by the patient’s characteristics and the degree of movement intensity that needs to be performed. It is important to bear in mind that due to its own characteristics, mouth opening is performed on the condylar axis, so that if we need to distalize one or several molars we must consider the following effects.

• Distalization produces a downwards and backwards mandibular rotation, in a clockwise direction.

• Distalization increases the mandibular plane angle with respect to the base skull [2].

• Class I with crowding and slight or non-severe protrusion.

• Dental Class II caused by mesialization of the upper molar due to loss of space either by early loss of the temporary second molar or loss of anchorage during some phase of orthodontic treatment.

• When deciding on the extraction of the second permanent molar either by caries or by another cause, with anterior crowding and/or ectopic canine [2].

The orthodontist depends on the use of traditionally used devices for molar distalization. This is the reason why the of use intraoral devices is preferred since they are not dependent on the patient's cooperation. Most commonly used is the Hilgers Pendulum and its variants [3,4]. A Pendulum spring is deemed to be effective in cases with unilateral molar distalisation as well as it can regain space on one side without putting undue strain on other parts of the upper arch [3]. The objective of this appliance is to move the teeth bodily minimizing the risk of root resorption.

A 19-year-old male presented to the department of orthodontics and dentofacial orthopaedics with the chief complaint of irregularly placed upper front teeth and desired correction. On clinical extraoral evaluation, he had a convex profile with posterior divergence, shallow mentaolabial sulcus, acute nasolabial angle, and competent lips with 0 mm interlabial gap. On smile evaluation smile arc was nonconsonant. There were no abnormalities in the temporomandibular joint and muscles of mastication on functional examination (Figure 1). 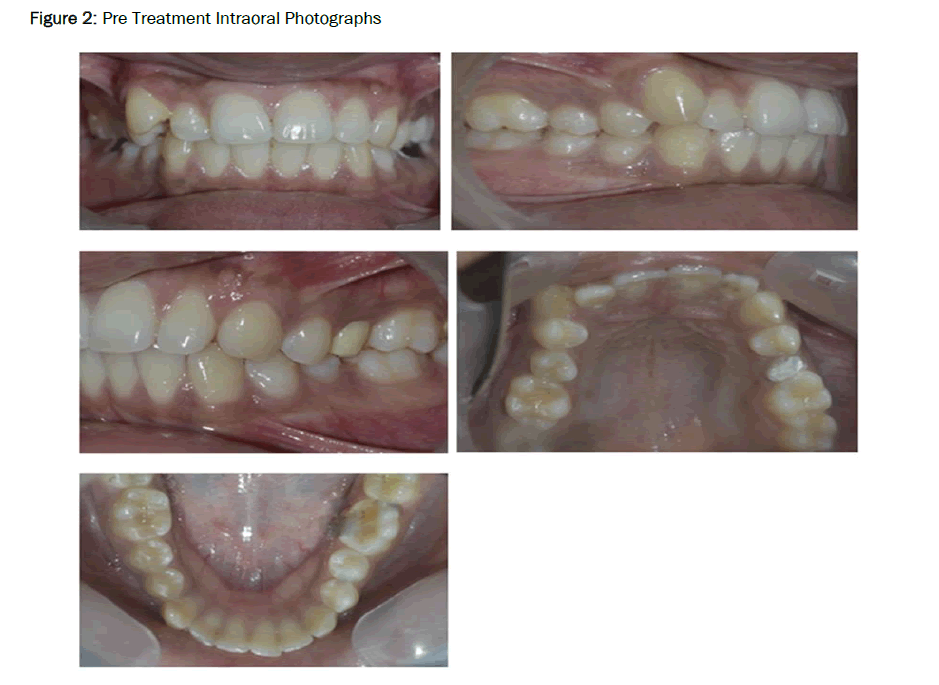 On cephalometric evaluation, SNA was 85 and SNB 84 suggestive of prognathic maxilla and mandible with class I skeletal base. Go-Gn to Sn was 18 indicating a horizontal growth pattern. The U1-NA distance of 6 mm at an angle of 30 and L1-NB distance is 5 mm at an angle of 30 revealed proclination of maxillary and mandibular incisors (Figures 3 and 4) and (Table 1). 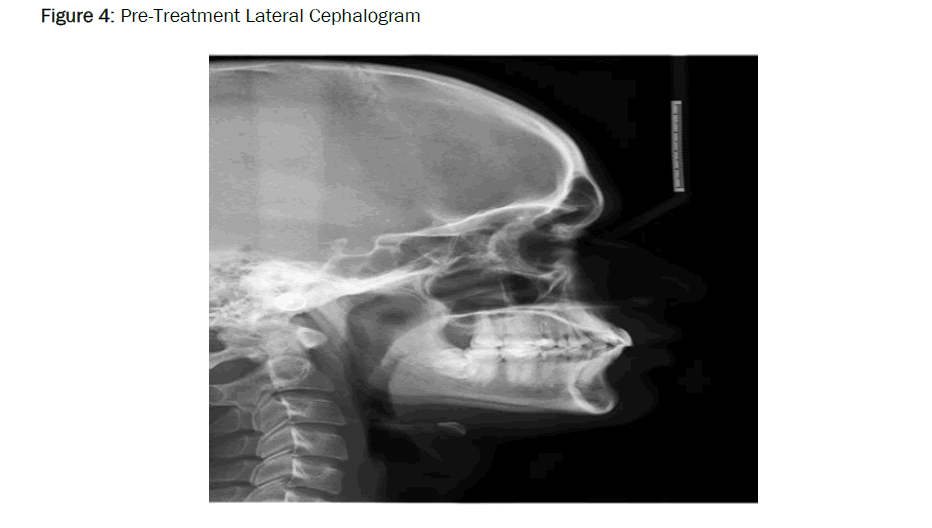 • Correction of class II molar on right side

A non-extraction treatment plan with unilateral distalization of molar on right was planned using the pendulum appliance to finish the case in class I molar and canine relation with optimum over jet and overbite.

The pendulum appliance was given with 16 for distalization using a force of 200 to 250 grams. In the case hereby presented the pendulum was used for four months in order to achieve overcorrection of the molar class. Upon appliance removal a class I molar and canine relationship and centred dental midlines were achieved (Figure 5). 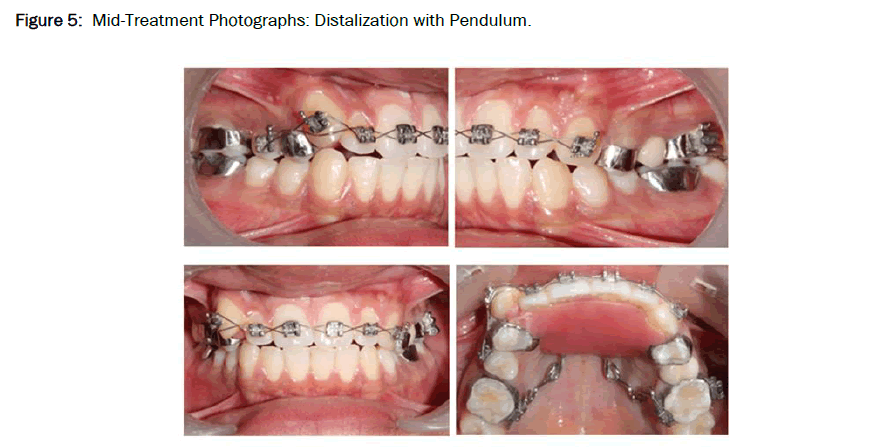 Space closure and dental midline correction were achieved with closing loops. Finally, the ideal arch wires were placed to perform second and third order movements to provide a correct occlusion. The final treatment time was 3 years and 8 months (Figures 6-9), after proper settling (Figure 10). Debonding was done and fixed retainer was given from canine to canine (Figures 11 and 12) 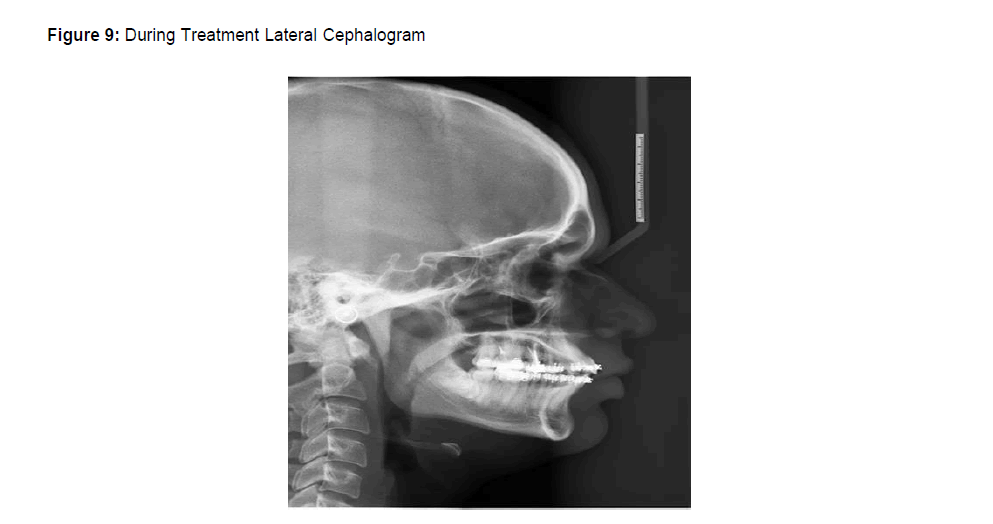 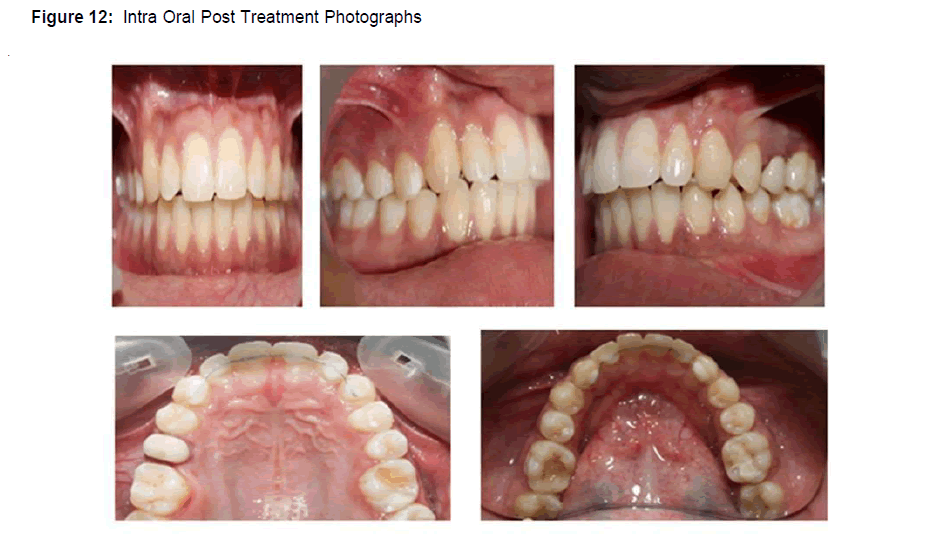 At the end of treatment, Hawley retainers were placed on the upper and lower arches.

Within four months the molar had distalised achieving a class I relationship. Spaces of 5 mm were produced in the right quadrants between the maxillary first molar and second bicuspid almost entirely by translation with some amount of anchor loss [5,6].

Canine was brought into the arch and class-I canine relation was established on both sides was uprighted. Upper lip prominence was decreased. Post orthopantomogram showed there was no significant root resorption (Figures 13 and 14) and (Table1). By off and Darendeliler5 reported that the pendulum performs a movement of 1.02 mm (+0.68 mm) per month with an initial strength of 200 to 250 g with a preactivation bends of 45 degrees 3, 6 proving that it is a simple effective appliance. The prime advantages being the distalisation occurred with the requirement of minimal patient cooperation and single activation gave successful results [3,7].The probable disadvantages of this method include the proclination of anterior teeth [8,9]. Need for patient's compliance for accurate oral hygiene, possibility of impingement of appliance components to palatal tissues. Anchorage loss is observed through premolar mesial movement and incisor mesial crown and tipping movements [10].

Molar distalization is one of the fundamental approaches for non-extraction therapy, especially in class II malocclusion cases. Many methods have been utilized to achieve molar distalization, including extra oral appliances and intraoral appliances, either removable or fixed. The pendulum appliance being the most traditional was effective in achieving the objectives of this case without any ill effects due to the methodology. An appropriate bodily movement of a single molar was accomplished.