In this thesis a memory chip has been designed with the size of 512 bit using Xilinx or model sim software. Memory Built-in Self-Test (MBIST) or as some refer to it array built-in self-test is an amazing piece of logic. Without any direct connection to the outside world, a very complex embedded memory can be tested efficiently, easily and less costly. Modelling and simulation of MBIST is presented in this paper. The design architecture is written in Very High Speed Integrated Circuit Hardware Description Language (VHDL) code using Xilinx ISE tools. Verification of this architecture is carried out by testing stuck at fault SRAM. A BIST algorithms is implemented like March C- and many more to test the faulty SRAM.

Fast low power SRAMs are becoming the critical component of many VLSI chips. There is increasing divergence in the speed of the processors and the main memory, and the power dissipation is also increasing due to increase in the integration and the operating speed as well as increase in the battery powered devices. The SRAM helps in bridging the gap and also reducing the power dissipation. After designing the memory, we will go for testing the fault in the memory.

Built-in self-test (BIST) technique is widely used to test and diagnose the random access memories (RAMs) [1]. To support the diagnosis, a BIST circuit exports the data to be diagnosed serially due to the limitation of test I/Os. Clearly, the diagnostic data exported is time consuming, because they are exported bit by bit. To reduce this time consumption, several diagnostic data compression techniques are there. Various compression methods are proposed to compress the data to be diagnosed in a pause and export way. Thus, BIST circuit is paused when fault is detected and then the fault is compressed and exported serially.

To Study the fault detection method of memory, we have to build fault models of memory first. There are three simplified parts where memory faults occur [2]. The three parts are: address decoder, read and write logic, memory cell array. The former two parts are equal to the latter in function; we only need to detect the memory cell array.

Following are the types of faults also called fault model:

Stuck-at fault: Abbreviated as SAF. In this type of fault model a unit or a line of memory is being assumed to be stuck at logical “1” or at logical “0”.

Addressing fault: In this type of fault model, a row or a column decoder may not access the addressing unit, or multiple addresses access the same storage unit, or one address accesses several cells simultaneously, or accessing other unit instead of the same specified unit.

Stuck open fault: In this type of fault model, a storage unit cannot be addressed. If storage unit has only one input port, it will generate only a fixed output value.

The architecture of RAM BIST is shown below. In the first block of RAM BIST architecture “ROM based Algorithm Generator” has been shown in which all 8 algorithm are kept in an ideal state [4]. This algorithm will remain in an ideal state unless BIST_EN signal is made equal to “1” (or it can be understood as until BIST_EN signal is made equal to “1”, the BIST operation would not be started). Among these 8 algorithms, one of the algorithms will be selected depending on the selection line of 8:1 MUX. Then selected algorithm is passed to “Algorithm Decoder”. The read/write signal from this block is transferred to the Embedded RAM to define weather read operation or write operation will be performed on to RAM Address [5,6]. The up/down signal is passed to the “Address Generator” to define whether a Read / Write operation is performed in “Up addressing mode” or “Down addressing mode”, it is decided by selecting the algorithm operation (Figure 1). 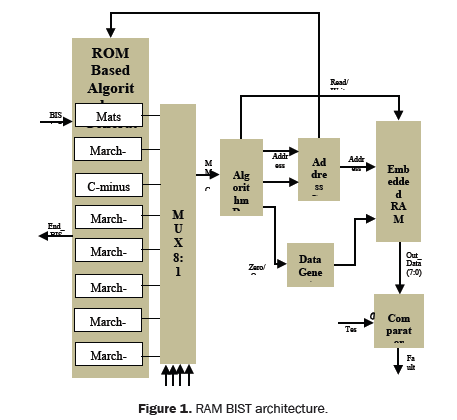 Then third signal Zero /One is passed to the “Data Generator” to define that read/write operation is performed on “0” bit or “1” bit [7]. Hence according to the state of selected algorithm, read/write operation is performed onto the RAM. Whenever “Read operation” performed then the data comes out of RAM and that data is transferred to the “Comparator”. In comparator there is another input port (that is test data) in which test input is given as same as that of data written onto “Embedded RAM”.

The comparator will check that both inputs are same or not, if there is some fault on (like stuck at fault or coupling fault), then the output data coming out of “Embedded Memory”, is different from the input given in to the comparator. So it will show a fault by making “ fault detect” signal “equal to 1”, if there is no fault in memory then “fault detect” will be equal to the “0” On the other hand if “Write” is being performed then comparator will be in an ideal state.

There are various types of tools which can be used as a simulator for executing the step to test the design. This is done by the use of the test bench [10]. A test bench is a set of the test stimuli timing corresponding to the circuit design. The response of the circuit which is under test is then can be read out in the form of waveforms.

The test bench file is responsible for providing the input stimuli to the memory under test (MUT) like clock and various other test control signals. Then the response will be produced in terms of the failure signals which are detected and displayed in the form of waveforms [11]. In this project we have used Model sim simulator. The result of the designing is shown in the following section in the form of screenshots of the software. First of all we are showing the screenshot of the RTL schematic which is written in the Xilinx software (Figure 2). 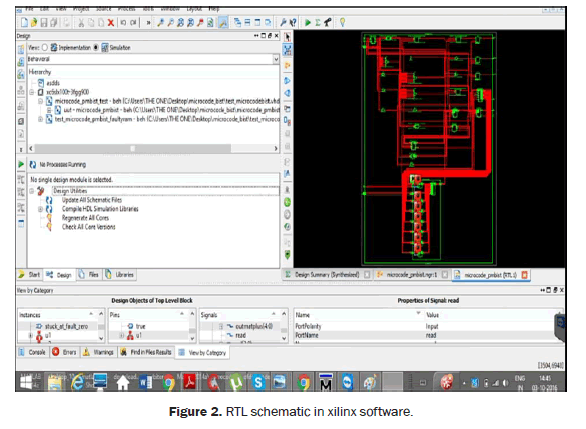 For this the software first asks for the selection of the elements. After selecting the elements we have to click on the tab Create Schematic [12]. As soon as we click on this tab, we see the RTL schematic of the program (Figure 3). After doing all this we will simulate the VHDL code using the ISim simulator or modelsim software [13]. The waveforms of all the input and output parameters are displayed on the screen. We can then provide the input and observe the output (Figure 5). The power report of the memory designed is shown below which will be obtained in the Xilinx Xpower analyzer (Figure 6). Now after the overall designing and testing of the memory, we will connect it to the FPGA kit through Xilinx software [14]. The screenshot is shown below (Figures 7 and 8). This paper presents the design of 512 bit SRAM memory. We chose 6T SRAM as memory bit cell and made an array designed with that bit cell. We came to know many things about the low power implementation of this 6T SRAM by going through many papers like making a 7T SRAM or 8T SRAM. The work in this respect can be taken forward to make a low power implementation. We have grasped many important concepts and learned tools that will help us in future.

In brief, a random access memory with built in self-test has been successfully designed. The BIST techniques are divided as online and offline testing. This project is designed at the entry level of VHDL so there are lots of modifications that can be done and additional architecture can be added in order to increase the robustness of the design.

• We can increase the bit size so that more memory locations can be tested by us.

• BIST is not able to insert the fault model. So future work can be done in order to insert and then detect a set of fault models.

• We can reduce the hardware coverage of the project by replacing the comparator and counter which we have used. Thus performance of our project will be improved.

• We can replace VHDL with Verilog HDL to reduce the command line for future work.

• Due to non-availability of resources, we were not able to program this project into actual FPGA hardware. So the future works can be done to run all these testing through FPGA hardware device to verify our work.