Over the centuries societies around world have developed their own traditions to make the sense of medicinal plants and their uses for attempt to overcome illness and suffering and enhance the quality of life. Plants have a great potential for producing new drugs of great benefit to mankind & medicinal properties of plants depend upon the presence of the different physiologically active component which lead to the search for new biologically active principles for therapeutic efficacy. The present phytochemical screening has been carried out on fresh mature leaves and Bark of Holoptelea integrifolia (Roxb) Plant for it’s different phyto constituents along with chromatographic profile. The results of the study could be useful in diagnostic tool of the identification of the Holoptelea integrifolia (Roxb) Plant and also to establish the quality and purity of this valuable drug.

Holoptelea integrifolia (Roxb.) is a large deciduous tree, 15-18 m high commonly known as Indian Elm belongs to family Ulmaceae found throughout the greater part of India [1,8] and is one among the variety of Karanja (Chirbilwa) described in Classical Ayurvedic Texts like Charak samhita[2] and Sushrut samhita [3]. Bark of the tree remains grey, pustular, exfoliating in somewhat corky scales. Leaves are elliptic-ovate, acuminate, base rounded or subcordate in shape, flowers greenish yellow, polygamous and found in short racemes or fascicles. Fruits are sub-orbicular with membranous wing. The flowering time of the tree is January to February, whereas, fruiting is seen in April to May [4].

Fresh bark of main trunk and leaf of Holoptelea integrifolia was collected from National Institute of Ayurveda campus, Jaipur in the month of January. The plant material was identified and authenticated by Prof. M.C. Sharma, Deptt. of DavyaGuna, National Institute of Ayurveda, Jaipur (Rajasthan). After the collection of plant material they were cut into small pieces and shade dried.

All Phytochemical screening were carried out in the Drug Standardization Laboratory of National Institute of Ayurveda, for the analysis of various phyto-constituents as per standard procedure described in A.P.I. [9,10]. In the plants, two types of phytochemicals are present, i.e.Inorganic matters & Organic matters. Inorganic Matters are those which are free from carbon i.e. all electrolytes comes under inorganic matter. Organic Matters are secondary metabolite products in the plants. Role of these components for medicinal purposes are important and examinations of both Organic and Inorganic matters are carried out quantitatively & qualitatively.

The drug sample of leaf and bark are examined qualitatively in order to determine the presence of various electrolytes. The test methods for this examination carried out as per the methods of Ayurvedic Pharmacopeia of India.

The organic substance of the drug sample shows different solubility in different solvents. Extractive value of both the bark and leaves of Holoptelea integrifolia in various solvents were observed.

These are the secondary metabolic products of the plants which held responsible for the different pharmacological activity and plays an important role for their medicinal value.

% of Acid Insoluble Ash of Leaves of Chirbilwa was 6.56%

% of Acid Insoluble Ash of Bark of Chirbilwa was 0.4%

% of water-soluble Ash of Bark of Chirbilwa was 3.88

Reaction of different samples of drugs with different regents

Thin layer chromatography is a technique to separate the compounds from a mixture based on adsorption principle. It has the advantage of faster runs, better separations, and the choice between different adsorbents. Different compounds in the sample mixture travel different distances according to how strongly they interact with the adsorbent. This allows the calculation of an Rf value and can be compared to standard compounds to aid in the identification of an unknown substance.

Solvent System - According to their increasing order of polarity.

TLC of the Leaf of Holoptelea integrifolia

This fraction (dry) mixed with 100% methanol and then subjected to filter; white colored precipitation was obtained as residue. This residual part was salty in taste which remains insoluble in organic solvent but soluble in water.

From the Earliest times, herbs have been prized for their pain reliving and healing abilities and today we still relay on the curative properties of plants in about 75% of our medicines [11]. Now globally the mindsets of people is changing towards the use of safer or less toxic natural products against chemically synthesized medicine in laboratory with lots of side effects. The curative properties of medicinal plants per are mainly due to the presence of different biologically active compound [12] such as Alkaloids, Protein, Glycoside, Phenol, Tanins, Carbohydrates, Reducing Sugar, Saponin, Flavonoids etc. As crude extract of the leaves and stem bark of this plant were used traditionally for the treatment of various ailments without standardization hence phytochemical screening is necessary in order to establish their identity, purity, safety and quality. 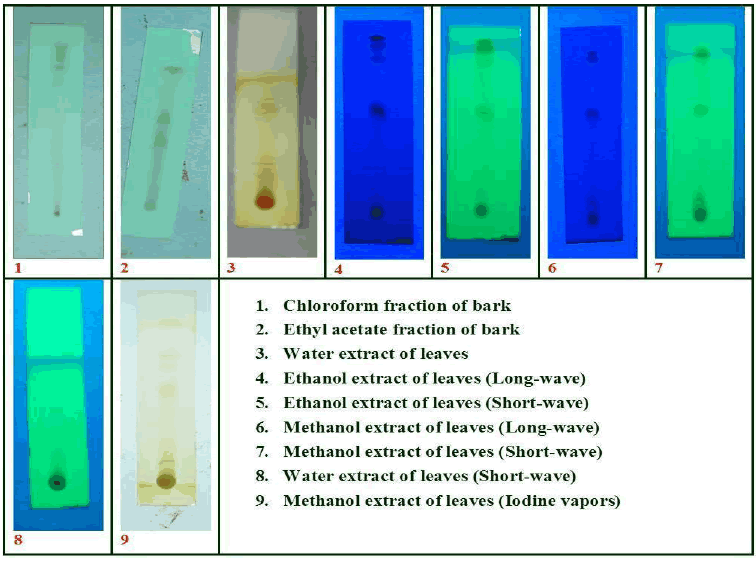 The preliminary phytochemical screenings, physico- chemical evaluation and chromatogram profile can be used as a diagnostic tool in the identification of the Holoptelea integrifolia (Roxb) as well as to establish the quality and purity of this valuable drug which may be helpful in utilization of this plant in herbal formulations, as a medicine and as pharmaceutical raw material.