Present investigation was carried out to study variation in endophytic fungal population colonizing soybean. Endophytic population was assessed at different growth stages of soybean (C.V. JS-335) viz., vegetative and reproductive stages. A 182 (28.88 %) isolates were obtained from vegetative growth stages (V1-V5) and 448 (71.11 %) from reproductive growth stages. As plant grows the endophytic population increases progressively however, at the onset of reproductive stages viz., R1-R8 the endophytic population starts to decrease and attains a stable value at R8 stage. The maximum endophytic colonization was recorded found at V5 stage (25.00%) and R3 stages (37.03%) at which the plant attains maturity. Endophytic fungal isolates belonged to 07 genera viz; Alternaria, Aspergillus, Cladosporium, Colletotrichum, Fusarium, Penicillium and Rhizoctonia.Our investigation provides a valuable insight in understanding of endophytic microorganisms in their unique ecological habitat.

Plant-microbial interactions have been a premier area of research interest. These interactions may range from beneficial to harmful. Microbial endophytes are typically defined as plant associated microbes that colonize living internal tissues of plants without causing any visible symptoms or immediate over-negative effects and can be isolated from surface disinfected plant tissue [1,2]. Virtually all plants are hosts to endophytic microorganisms and endophytes may usually be fungi, bacteria and actinomycetes[3]. These microorganisms include both commensal species, which have no direct effect on the host plant, and mutualistic symbionts[4]. Thus, endophytic colonization improves the ecological adaptability of the host. Hence endophytes may be regarded as a true companion of host.

Intimate associations between endophytes and host plants can be formed without harming the plant and they have been demonstrated to improve and promote growth of host plants as well as to reduce disease symptoms caused by plant pathogens and/or various environmental stresses[5]. Endophytes have been shown to confer fitness benefits to host plants including tolerance to herbivory, heat, salt, disease, and drought, and increased below and aboveground biomass. Thus, endophytic colonization improves the ecological adaptability of the host. The unique ecological niche has made endophytic bacteria as attractive and potentially promising tool for agricultural applications especially, for those bacteria having commercial features such as plant growth promotion and activation of plant defense mechanisms [2]. Several bacterial endophytes have been reported as potential biocontrol agents that may improve and promote plant health[6].

Various reports indicate that endophytes exist in a variety of tissue types within numerous plant species, suggesting a ubiquitous existence in most plants[7]. The endophytic population may originate from the usual soil community and a great diversity has been reported in diverse plant community [8]. The study

of the structure of endophytic microbial populations, their distribution, interaction and functions within their host is important for understanding their ecological role[9].

Analysis of the structure of microbial populations has practical importance; the results can be used to assess the fate of released strains and their impact on resident microbial communities [10]. Hence, the present investigation was carried out to study variation in distribution and diversity of endophytic bacterial population colonizing soybean. Healthy plants of soybean were screened from the 6 different locations of Washim district viz., Washim, Mangrulpir, Manora, Karanja, Risod and Malegaon. From each location, samples were collected randomly from 3 different sub-locations. From each sub-location 3-5 healthy plants were selected randomly. The growth stages of soybean were identified as specified by McWilliams[8] Sample represent of each growth stage viz., vegetative (V1-V5) and reproductive (R1-R8) were collected. The plants were uprooted, sealed into plastic bags and labeled. All samples were processed immediately after collection.

The collected plants were washed under tap water to remove soil and further separated into plant parts viz., root, stem and leaf. All root, stem and leaf samples were washed twice in distilled water then surface sterilized[2,3]. Surface sterilization was carried out by immersion for 1 minute in 70% (v/v) ethanol, in 0.1% HgCl2 upto 3 minutes out for roots and nodules, whereas, upto 5 minutes for leaves and stems respectively. The tissue was then washed ten times using sterile distilled water.

Sterility checks after surface sterilization were carried out by monitoring separately the section impressions and rinse wash water for the presence or absence of microbial growth on selective medium viz, for bacteria on nutrient agar for 6 days at 30°C, for actinomycetes on glycerol yeast extract agar for 6 days at 30°C and for fungi on potato dextrose agar for 7 days at 30°C [2, 3]. The absence of growth was taken into consideration as positive test for surface sterilization.

After surface sterilization, the samples were cut into 5-7 mm pieces with sterile blade and forcep and aseptically transferred to plates containing Potato Dextrose Agar (PDA) supplemented with streptomycin (100 mg/mL)[3]. Four pieces of surface sterilized plant material (root, stem and leaves) were plated per plate and the experiment was replicated three times. To monitor the growth of slow growing and low sporulating fungi half of the plates were incubated at 25 ± 2 °C and other half at 37 °C [3]. The plates were monitored daily for up to 30 days for fungi growing from the cut end of segments. Fungal isolates were identified on the basis of conventional cultural and morphological characteristics followed by comparing with the available standard literature[11,12,13,14,15,16] and further purified and maintained on PDA at 4°C. Per cent colonization frequency was calculated as number of fragments colonized by fungi in relation to the total number of fragments[3,18]. The pathogenecity test was conducted for all the isolated strains of endophytic fungi and the pathogens were ignored [17].

Significant variations in the populations of both indigenous and introduced endophytes have been reported. These variations are attributed to plant source, plant age, tissue type, time of sampling, and environment [19]. Soil type, to a large extent, determines the endophytic population[20]. Factors such as sampling site, tissue specificity, tissue age or associated vegetation can influence the composition of endophytic communities[21].

Among these, geographical variation is recognized as one of the most important. Taxa isolated from the same plant species tend to vary according to the location of each individual. Age and phytosanitary status of the host plant can also exert some effect on the composition of endophytic community. Endophytic population is influenced by different factors that include the host developmental stages environmental conditions and geographical location of the experimental site. Moreover, genotype or cultivar of plant also affects significantly the endophytic population[6].

Our findings are in congruence with previous reports. The population size of endophytic bacteria in agronomic plants including soybean varied between 0-6.0 log10 CFU/sample tissue. Endophytic bacterial population is affected by the growth stages of plant. At reproductive maturity (R1-R3) population is maximum as compared to other growth stages[19]. Significant differences in bacterial population densities are found to be influenced by soybean growth phase and type of tissue sampled[6].

Present investigation also correlates to the reports of Prakamhang[22] endophytic bacteria in cultivated rice were found in greatest density in roots. Generally, bacterial populations are larger in roots and decrease in the stems and leaves [19]. However, there were no significant differences between mean counts of actinomycetes from A. fragrantissima from different sites within Saint Katherine [23]. Irrespective of the growth stage of rice and type of soil, the majority of endophytic bacteria were recovered from roots (2 X 105 – 3 X 106 CFU/g fresh weight) as compared to other parts of rice plants. While the endophytic bacterial population density in stem samples was 4 X 103 - 105 CFU/g fresh weight, the lowest population density was present in leaf tissue with 1 X 103– 2.7 X 104 CFU/g fresh weight[22].

Isolation and identification of endophytic fungi 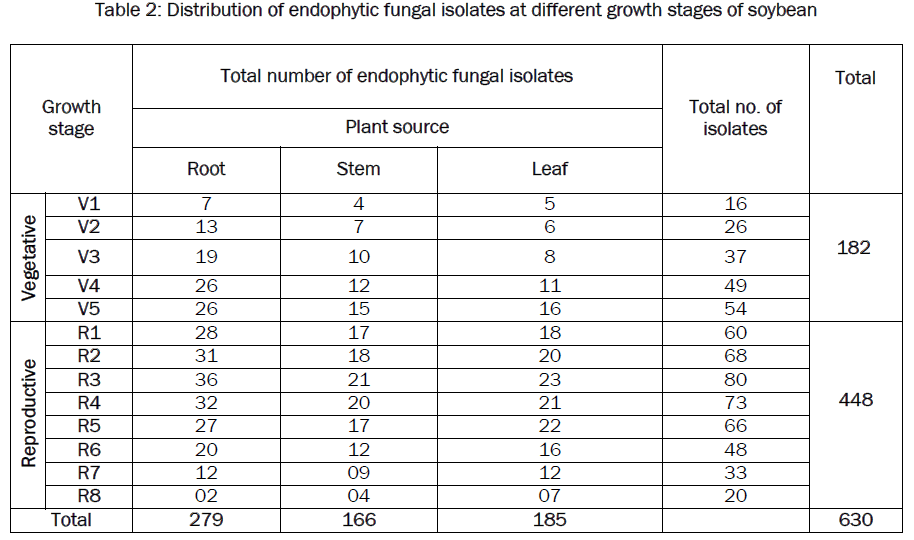 Fusarium (20 %) and Alternaria (20 %) were found to be predominant endophytic fungi present in soybean. Whereas, Aspergillus,Penicillium, and Rhizoctonia were moderately distributed and their predominance was at par 15 %. However, Cladosporium and Colletotrichum were not so frequent and were at par 10 %.

Total 28 isolates of endophytic fungi from the leaves, and stems of Sesbania grandiflora (L.) Pers were isolated. Among of them, 24 strains were isolated from stem and 4 from leave [28]. Endophytic filamentous fungi isolated from the root of maize belonged to Fusarium sp. and Acremonium sp., Phomosis sp., Paecilomyces sp., Phaeoacremonium sp. and Cladosporium sp. Beaveria bassiana, A. strictum, A. alternata, Phoma sp. and T. [29].

Endophytic fungi were isolated from 22 species of medicinal plants in Taiwan [30]. Among 156 isolates of endophytic fungi, 67 isolates, belonging to 21 genera in 15 families, were from Lauraceae and 89 isolates, belonging to 27 genera in 16 families, were from Rutaceae. The most abundant genera were Colletotrichum, Guignardia, Hypoxylon, Nigrospora, Phomopsis and Xylaria, especially Colletotrichum spp. with 14 isolates and Phomopsis spp. with 15 isolates. In addition, species of Chaetomium, Alternaria, Stemphylium, Coprinopsis and Cyanodermella were dominant and host specific to Rutaceae, whereas species of Podospora, Leptosphaeria and Pilidiella were only observed in Lauraceae.

Authors are thankful to University Grants Commission, New Delhi, for providing the financial assistance under the scheme of major research project as per XIth plan.