Gymnosperms are the plants of the unique origin. They have a strong different kinds of the life of the evolution in the phylogenetic pathway. The lineages of the lines goes in the different direction. In that case a single line of the evolution cannot be drawn for All taxa’s. In that scenario we are analyzing the genus Taxus of the coniferales the genus is widely distributed in all part of the world. The belt of the plant can be found in the North and south America as well as some places of the Australia and the Germany. In India the plant can be found in the Himalayas as well as in the Nilgiri forest. However the data of the plants shows that the plant is near to endangerment, since habitat loss and the cutting of the forest of the Taxus is the key factor for the disappearance of the tree. Conservation n efforts in-stu as well as ex-situ are required for the conservation of the tree.

Gymnosperm (Gymno: nake, sperm: seed) are the plant which have the naked seed. i.e. the seed are not encapsulated in any fruit. This is the key feature for the gymnosperm and the angiosperm plants [1]. Gymnosperm line of the evolution is very different from the another plant cladistices, since gymnosperms are the heterogeneous assemblage of the different kind of the plants. The whole gymnosperms has been divided in to the three classes [2]. One of them is the cycdophytes, another is the coniferophyte and the third one is the gnetophytes. The cycadophytes lines of the evolution is totally different from the another two lines, since most of the members of the cycadophyte are now completely extinct in the course of the evolution

Taxus belongs to the coniferales. Coniferales are the sole (leaving some gnetophytes) representative of the whole gymnosperms.

Taxus (yew plant) follows the general life cycles of the (coniferales) gymnosperms. Like all other gymnosperms the main body of the life cycles is the sporophyes. The main sporophytic body of the plant have the roots, stem and the leaves of the unique composition. In this case the leaves of the plants are of the linear and the lanceolate. The roots are the typical dicot kinds of. They have a good dichotomous division, some of the species of the Taxus have the mycorhizal association. This feature of the Taxus is of good values, since in some of the forest these association of the mycorrizal provides the food and the water and they complete the nitrogen deficiency of the plants. Stem are of the dichotomous and branched, the branching of the plants starts from some above the soil line. However the plant never achieve the height of the other gymnosperm like the Pinus and the other conifers.

Leaves of the trees are the linear and the lanceolate, the arrangement of the leaves are in the form of the whorl cones are the very special feature of the gymnosperms, although the cone have not the woody appearances. The male sporangia occur in the form of the whorls. The archegonia is also the structure part of the female cone. However the height of the female cone is the point of the consideration. They are not of too height as the other females cones of the gymnospersm. The gametophyte part of the body is concern only to the gametes which are of the short duration.

Taxus is the dioecious (some species) or moecious (major species) plant. The average height of the plants is the around the 5-6 meter. It follows the typical cone nature. The leaves of the plant are of the long and the linear. The branches of the tree also follow the typical gymnosperm nature. The cone of the gymnosperm can be seen at the time of reproduction. Taxus is the genus which follows the pattern of the same pathway away from the normal life cylces of the gymnospersm. Some of the species of the Taxus have the aril around the seeds which forms the most important part of the plants propagation, since the plants aril is full of many kinds of the metabolites which attract the insects for the process of the pollination. Taxus metabolites also attract the attraction of the many workers all over the world. Since the biochemical composition of the metabolites of the plants is of higher significance. The roots and the other parts of the plants are also of the great values. A number of the work has been done on that plant and there metabolites (Figures 1 and 2). Figure 1: Taxus in the Natural Habitat. Figure 2: The life cycles of the typical gymnosperms. 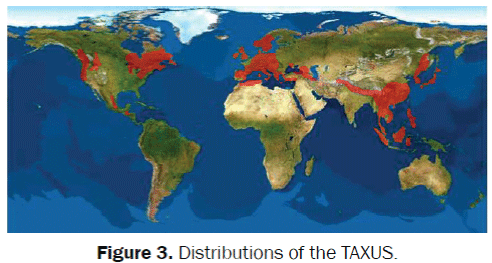 Figure 3: Distributions of the TAXUS.

Uses of the Taxus: Some of the most common application of the Taxus can be cited over there [3].

1. The wood of the TAXUS is used of the commercial purposes. Wood of the Taxus is the hard wood; it is durable and has the long longevity.

2. The body parts of the Taxus contain a number of the metabolites in the leaves, roots, fruit and the bark.

3. The metabolites of the eaves are of the specially important since they are of the anticancer in nature. A number of the research work is occurring on the leaves of the genus.

4. The wood of the Taxus is utilized for the formation of the musical instrument.

6. The wood of the genus is used for the formation of the BOWS.

7. Differ part of the plant are used for the phytotherapy purposes.

8. The plant is used for the various region purposes in many tombs’

9. The Himalayan (Indian Taxus) yews has the anti-inflammatory and anti-analgesic properties.

10. The leaves and the stem metabolites also reported to be the antifungal and the antimicrobial of nature.

Conservation of the Taxus:

In India as well as in the another art of the world this plant is degrading with the great speed. In India the belt of the yew plant can be seen in the Himalayas as well as in the Nilgiri forest. However there are several reasons which are responsible for the degradation of the trees. Some of the factors are enlisted as.

2. Cutting of the trees,

3. Lack of the social awareness,

Well in-situ and ex-situ conservation of the tree are needed for the rapid propagation of the plant.

Taxus is the genus of the economic importance. The leaves, of the tree has a immense application like they have a important anticancer properties. In addition the wood of the tree also of the higher values. From the phylogenetic point of view the plant represent the reservoirs of the character. So it is highly essential that the plant should be conserved. In India government efforts are essential for the propagation of the trees. in-situ and ex-situ conservation should be implemented for the propagation of the trees.